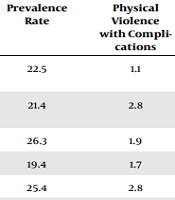 Evaluation of Domestic and Non-domestic Violence Prevalence in Iran

This study aimed to evaluate the prevalence of domestic and non-domestic violence (outside home) in Iran during 2015.

This descriptive cross-sectional study was conducted on individuals aged 15 and older living in urban and rural areas of Iran. A total of 36,600 people from 31 provinces of Iran were selected by systematic and cluster random sampling using the postal code available in the country’s post office software. A researcher-made survey questionnaire was used for evaluating violence. The data were analyzed using SPSS software version 20.

Based on the results, the prevalence rate of 23.1% of domestic violence and 8.1% of non-domestic violence necessitates preventing and treating this social problem. Therefore, health authorities need to take necessary action to raise awareness and reduce the risk-taking behaviors of the population in Iran.

Violence has a long history as a global public health problem, found in various forms, even in western countries. Although interpreting the word violence are entirely different among the developed and less developed countries, each entity has its customs and regulations and the nature of violent behavior is the same in all societies (1). However, domestic violence, or violence is a global problem among family members and its physical, psychological, and social effects affect the family and society’s health (2). Domestic violence consists of violence among family members such as spouse violence, violence against children, sibling abuse, or elder abuse (3).

Clinically, domestic violence is an aggressive and repressive behavior pattern with physical, sexual, psychological, and economic pressures applied by adults or teenagers against their emotional and sexual partners (4).

Violence can be physical, psychological, sexual, and economic and may occur at the family or society (5).

Physical violence is the intentional use of physical force with the potential for causing injury or harm accompanied by complications such as a bruise, tear, bleeding, fracture and dislocation, or pushing, slapping, and kicking (6). Psychological violence is any inappropriate behavior and speech, which endangers the individual's psychological health and includes undue criticism, insult, humiliation, ridicule, and cursing (7). Sexual Violence is any form of sexual behavior, which is intentionally threatened, abused, and injured sexually such as rape, sexual harassment, physical contact, sexual trade, and sexual exploitation (8). Economic violence is any intense behavior, which intentionally affects, harasses, and discriminates against individuals' employment, economy, and property (5, 9).

Both men and women may commit violent behavior in the family. However, studies have indicated that women were under violation more than men. In other words, 90%, 7 - 8%, and 2 - 3% of violence and harassment in the family occurred toward women, mutual, and men, respectively (10). In the United States, 7.8% of the general population engages in violent behavior, most of which is committed by men and young adults and reduces a person's psychosocial and social function (11).

Straus stated that the rate of violence against women in the family is equal to men. The majority of physical violence perpetrated by men involved injuries, traumas, or other physical suffering, while, psychological violence was perpetrated by women such as pushing, threatening to beat, emotional misbehavior, and turning children against their fathers (12, 13).

The studies have shown that violence has recently increased among families and society, including a wide range of intentional physical, psychological, emotional, and verbal acts. Poverty, unemployment, moral collapse of the families, educational values, and fear of the future phobia are some reasons for aggression and violent behavior in societies (14, 15).

A systematic review of studies indicated that the average prevalence of domestic violence was 22.9% in Iran (18). Systematic and meta-analytic Studies on violence conducted against women in Iran showed that the prevalence of emotional violence (59%) was more than physical (45%) and sexual (32%) violence (15).

Domestic violence screening was conducted on clients in health centers and hospitals in Iran. According to this study, although women are more likely to be abuse victims, the rate of violent behavior is relatively equal between men and women (19-22). However, few studies have been conducted on the prevalence of violence by individuals.

This study was performed to assess the prevalence rate of violent behavior at home and outside home, as well as domestic and non-domestic violence by gender and place.

This cross-sectional study was conducted as a national study of mental health status and social capital in January and February 2015. The population included people aged 15 and over living in urban and rural areas of the country. The sample size was based on the formula of cross-sectional studies to determine mental health status (prevalence 35%, statistical error of the first type 5%, and accuracy 3%). Based on the effect of cluster sampling on 1/2, there are 1200 samples in each province (100 clusters of 12). In each cluster, 12 people were studied based on six age groups (15 to 25 years, 26 to 35 years, 36 to 45 years, 46 to 55 years, 56 to 65 years, and 66 years and older) and two people from each age group (one man and one woman), which led to 36,600 people (in 31 provinces of the country) in total.

The regular and cluster random sampling methods, as well as the postal code in the post office software, have been used to obtain the studied samples in urban and rural areas of the provinces (the center of the province and two other cities).

This study used a researcher-made survey questionnaire as a principal tool for screening domestic and non-domestic violence data. The validity and applicability of this section of the questionnaire were evaluated through a pilot study.

The retest method (one week after the initial implementation) was used on 250 people to evaluate the reliability of the questionnaire. The Spearman correlation coefficient was 0.89, and the validity of the content of the questions was evaluated by a group of experts in behavioral sciences, statistics, and epidemiology.

The questioning lasted for two months (22nd November 2014 - 20th January 2015) and was filled out by mental health experts of the health departments in each province. A man and a woman referred to house doors according to the ten-digit postal codes of the cluster heads, and evaluated 12 adults based on the Kish Grid (different ages and genders). Consent forms were provided, and participants' names were not recorded in the questionnaire in accordance with ethical principles. The data were analyzed using SPSS software version 20.

Table 1. The Distribution of Individuals' Violence Relative Frequency Based on Gender and Place (n = 35,357)

According to Table 1 23.1% of individuals (23.7% of males, 22.5% of females) have admitted violent behaviors towards their spouse, parents, children, and siblings within the last 12 months. As shown in Table 1 2.3% of individuals had physical violence causing injuries like a bruise, tear, bleeding, fracture and dislocation, and 13.3% have admitted non-injured physical violence such as pushing, slapping, kicking. In addition, 48.3% of the individuals had psychological violence, including insult, humiliation, ridicule, and cursing, and 36.2% had other types of violence toward their families. The prevalence rate of domestic violence among urban inhabitants was 23.2% compared to 22.9% among rural citizens.

The results also indicated that 8.1% of individuals (12% of males and 4.1% of females) had violent behavior outside their home within the last 30 days. Further, 6.1% of individuals had physical violence complicated with a bruise, tear, bleeding, fracture and dislocation, and 15.3% of them had non-injured physical violence, including pushing, slapping, kicking. Moreover, 45.5% of the individuals had non-physical violence, including insult, humiliation, ridicule, and cursing, and 29.1% of whom had other violence outside home within the last month. The prevalence rate of non-domestic violence among urban inhabitants was 8.9% compared to 7.2% among rural citizens.

Table 2. The Distribution of Individuals' Violence Relative Frequency in Different Provinces of Iran

This study aimed to evaluate the prevalence rate of domestic violence and violence outside home in individuals aged 15 years and older in Iran. The results showed that 23.1% of participants admitted violent behavior toward their spouse, parents, children, or siblings within the last 12 months. The systematic review of the studies conducted in Iran (18) indicated that the prevalence rate of domestic violence in the country is 22.9%, which is consistent with the results of this survey. The results indicated that violent behavior inside home and between family members is dramatically increasing due to social, cultural, and economic problems. According to WHO reports (16, 17), the prevalence of domestic violence varies between 18 - 68% in developing countries. The difference can be attributed to the different definitions of societies regarding domestic violence and the extent to which this social harm is accepted by family and community members.

Men had a higher prevalence rate of domestic violence than women (Table 1) because women have sexual and physical limitations, are more emotional, and have more compatibility with economic, family, and social situations. Previous studies in Iran (19, 21) have revealed that the prevalence rate of violence among males and females was approximately the same, and males had slightly more abusive behaviors than females.

There is a higher rate of physical violence with potential injuries among men and urban residents, and a lower rate of physical violence without potential injuries among rural women due to dilemmas of urban life, welfare loss, and lack of possibilities. However, many variables should be considered in future studies of the subject.

A total of 8.1% (12% were men and 4.1% were women) of individuals had violence outside home, which confirms the results of Okuda et al. (13). Men and urban inhabitants had the highest violent behavior causing injuries outside home. Several factors may contribute to men's high prevalence of violence outside the home, including their lifestyle, environment, and psychosocial behavior.

The prevalence of psychological and emotional violence inside and outside home was higher than physical violence causing injuries or non-injury-based violence. A survey conducted by Hajnasiri et al. (23) reported similar findings.

Although 36.1% of individuals admitted other types of domestic violence, including sexual violence, this form of abuse was not explicitly questioned and studied. Consequently, future studies are recommended to explore sexual violence.

This study should be repeated every five years to determine the flow of this social dilemma. Self-emotional control, communication skills, and emotional regulation skills training should be provided to the general population through group media to promote health literacy and prevent violent behavior.

This study is the result of the national project, “national survey of mental health and social capital in Iran (2015),” which was funded by the deputy of Research and Technology of the Ministry of Health and Medical Education, Dr. Reza Malekzadeh. We would like to express our gratitude and appreciate the support of the Ministry and all mental health experts from the medical universities of Iran.

Copyright © 2022, Journal of Kermanshah University of Medical Sciences. This is an open-access article distributed under the terms of the Creative Commons Attribution-NonCommercial 4.0 International License (http://creativecommons.org/licenses/by-nc/4.0/) which permits copy and redistribute the material just in noncommercial usages, provided the original work is properly cited.
download pdf 117.22 KB Get Permission (article level) Import into EndNote Import into BibTex
Number of Comments: 0