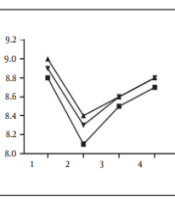 The Efficacy of Melatonin and Clonidine in Preventing Emergence Delirium in the Elderly Undergoing Orthopedic Surgery, Neurosurgery, and General Surgery: A Placebo-controlled Randomized Clinical Trial

Emergence delirium (ED) is a complication after surgeries due to general anesthesia.

This study aimed to evaluate the efficacy of melatonin and clonidine, which are hypothesized to have a curative effect on ED.

This randomized, placebo-controlled, double-blind, three-way parallel clinical trial was performed in Imam Reza Hospital in Birjand, Iran in 2019 - 2020 who were selected using convenience sampling. The inclusion criteria were age > 65 years and preoperative Abbreviated Mental Test (AMT) score ≥ 8. The exclusion criteria were suffering from any chronic diseases. Participants were divided into 3 groups: Placebo, clonidine, and melatonin groups who received placebo, 100 μg clonidine, and 5 mg melatonin, respectively. A first dose was administered at bedtime before surgery, a second dose 90 minutes before the procedure. An AMT and Mini-mental State Examination (MMSE) were administered to determine ED.

This study included 150 patients with a mean and standard deviation of 74.6 ± 6.8 years. According to AMT and MMSE, there was no significant difference in the level of ED between groups on the first, second, and third days after surgery (P > 0.05). Emergence delirium levels in the clonidine and melatonin groups were lower than in the placebo group. According to AMT and MMSE, ED was not significantly correlated gender, age, and type of surgery. Emergence delirium was significantly associated with postoperative bleeding and electrolyte disturbance (P < 0.05).

Melatonin and clonidine did not affect the occurrence of ED in the elderly undergoing surgery, but these medications could slightly reduce their occurrence.

Delirium is one of the most common complications of patients admitted to intensive care units (ICUs). Patients in hospitals are often affected by delirium, which is a disorder of consciousness, an oscillating cognitive impairment, and a serious acute problem (1, 2). Clinical diagnosis of delirium is based on assessing the patient’s mental state using the Diagnostic and Statistical Manual of Mental Disorders (DSM). Patients should be evaluated on the basis of their appearance, consciousness, attention, thinking, speech, memory, mood, judgment, and behavior (3).

Various studies have shown that delirium causes problems such as increased hospital stays, increased anxiety of patients’ companions, increased mortality, cognitive deficits, and fear of occurrence and complications (1, 4-6). Similar studies have shown that postoperative delirium (which is emergence delirium (ED)) is more common in patients undergoing orthopedic surgery and heart surgery (2). In addition, the incidence of delirium varies in different wards of the hospital. The highest incidence rate was related to orthopedic surgery, heart surgery, and ICUs (7). According to previous studies, delirium is related to hypoglycemia, metabolic encephalopathy, preoperative hypoxemia, drug intoxication (such as anticholinergic drugs), hypotension, type and duration of anesthesia, surgical stress, postoperative pain, insomnia, electrolyte disturbance, fever, and bleeding (8, 9). In addition, postoperative pain causes sleep disturbances and increases the levels of anxiety and delirium (10). Some studies have stated that the cause of ED might be the disturbance of neurotransmitters, including melatonin and norepinephrine, along with anticholinergic activity (8, 10). Factors affecting ED include age over 70 years, history of cognitive impairment and ED in previous surgeries, preoperative use of opioids, benzodiazepines, and alcohol, impaired vision, and high blood urea (8, 11).

According to studies in this field, non-pharmacological interventions are the most effective way to prevent ED (12). In the event that conventional non-pharmacological methods do not work, compounds have also been suggested for the treatment of ED (13). In addition to haloperidol and olanzapine, risperidone is also commonly used to treat ED, but there is a lack of evidence to support their effectiveness (14). An additional class of new drugs that prevent ED are the adrenergic receptor agonists like clonidine (15). Clonidine has various effects on the body, including decreasing sympathetic system activity, heart rate, blood pressure, sedation and analgesia (15). In additional, ED may be caused by disturbances of neurotransmitters like melatonin, which is produced by the pineal gland and is currently administered as a synthetic supplement for sleep disorders (16). According to previous studies, preoperative melatonin intake in patients has reduced the incidence of ED (17, 18).

There have been no accepted and definitive drugs for preventing ED. Therefore, the present study was conducted to compare the effect of clonidine and melatonin in preventing ED in the elderly undergoing orthopedic surgery, neurosurgery, and general surgery at Imam Reza Hospital in Birjand, Iran, from 2019 to 2020.

A random sequence of 6 block sizes was used to divide the participants into a control group and 2 intervention groups after receiving written informed consent. Patients in group 2 (clonidine recipients) and group 3 (melatonin recipients) received 100 μg of clonidine and 5 mg of melatonin, respectively. A first dose of these medications was given at bedtime the night before surgery and a second dose 90 minutes before surgery. All patients were anesthetized under general anesthesia with the same agents. Two expert psychiatrists assessed ED levels based on the AMT and Mini-mental State Exam (MMSE) on the first, second, and third days following surgery. The preoperative delirium levels were also considered as baseline delirium status in individuals.

Orientation, attention, language, and visuospatial proficiency are examined in the 30 questions in this dementia screening tool. In this questionnaire, a score above 24, 19 - 23, 10 - 18, and less than 9 shows normal status, mild disorder, moderate disorder, and severe disorder, respectively. The validity and reliability of this questionnaire were confirmed in a study by Foroughan et al. (20).

Demographic information (age and gender), surgery type (general surgery, orthopedic surgery and neurosurgery), anesthesia duration, postoperative bleeding history, fever, using analgesics, water and electrolyte balance, systolic and diastolic blood pressure along with suffering from chronic diseases, including cardiovascular disease, diabetes, hepatitis, hypotension, and hypertension were included in IBM SPSS Statistics for Windows, version 23 (IBM Corp., Armonk, NY, USA). Quantitative variables were described using mean and standard deviation (SD), and qualitative variables were described using frequency. The normality of the data was assessed using the Kolmogorov-Smirnov test. Chi-square and Kruskal-Wallis tests were used to compare the variables between the three study groups. The Kruskal-Wallis’s test was also used to compare the scores of AMT and MMSE in different groups during the first, second and third days after surgery. The chi-square test was used to assess the number of people with ED in each study groups at different times. In this study, a significance level of P < 0.05 was considered. 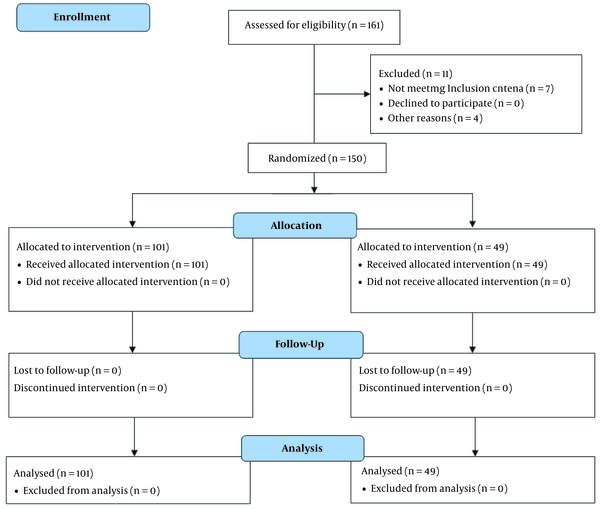 Table 1 shows no significant difference between groups in terms of measured variables except age. In the present study, 40 patients (26.6%) had diabetes, 35 patients (23.3%) suffered from cardiovascular disease, 25 patients (16.6%) had hypertension, and 2 patients (1.3%) suffered from hepatitis and hypotension. Further, 144 patients (96.0%) used sedatives after surgery, and water and electrolyte disturbances were observed in 13 patients (8.6%). The mean anesthesia time was 55.5 ± 20.2 hours. The mean systolic and diastolic blood pressure were 121.1 ± 9.8 and 79.7 ± 8.3 mmHg, respectively. Severe side effects such as hypotension and bradycardia were not observed in the clonidine group.

Table 1. Baseline Characteristics of the Study Participants (n = 150) a

a Values are expressed as No. (%) or mean ± standard deviation.

a Values are expressed as mean ± standard deviation.

Table 3. Comparison of Emergence Delirium in the First, Second, and Third Days After Surgery Based on Abbreviated Mental Test and Mini-mental State Examination Between the Study Groups

According to Figure 2, the lowest mean score belonged to the control group based on AMT. On the first day after surgery, the mean score in all groups decreased considerably, and the clonidine group was in a better status than the other two groups. On the second and third days, the clonidine and melatonin groups had an almost equal mean score, which was higher than the control group. Based on MMSE, melatonin increased the mean score more than clonidine, and a better condition was created in patients by taking melatonin.

According to Figure 3, based on AMT, more people in the control group developed delirium compared to the intervention groups in the first and second days after surgery. However, the number of patients with delirium in the control group was lower than in the intervention groups on the third day. Furthermore, based on MMSE, most patients with delirium in the first, second, and third days after surgery were in the control, melatonin, and clonidine group, respectively.

This study was a randomized, placebo-controlled, double-blind, three-way parallel clinical trial performed on 150 patients undergoing general surgery, orthopedic surgery and neurosurgery in Birjand, Iran. Delerium is characterized by sudden unconsciousness, sleep-wake cycle disorders, attention disorders, and psychomotor disorders (1, 17). Emergence delirium is mainly observed in the elderly, and today, this type of delirium needs to be recognized and reduced in incidence due to the aging of societies and the increasing number of surgeries.

This study measured baseline delirium levels before surgery to prevent interference with the results. However, there was no significant difference between the three groups. The level of consciousness decreased in all patients undergoing general anesthesia. As expected, the level of consciousness was not appropriately related to anesthetic drugs on the first day after surgery. Moreover, the mean delirium score decreased compared to the baseline in all groups, and no significant difference was observed between the groups. In a similar study, ED decreased in people who took melatonin compared to others, which is inconsistent with the results of the present study. However, the clonidine results were consistent with those of the present study (17). This difference could be due to the type of anesthesia used in the two studies (spinal anesthesia versus general anesthesia). In addition, in another study performed on patients with heart surgery, melatonin was significantly effective in reducing ED levels. Further, age was introduced as an effective factor in the incidence of delirium (21). Furthermore, clonidine consumption reduced the incidence of ED in patients with aortic dissection, as well as ICU hospitalizations and respiratory status (15). In another study on elderly patients with hip fractures, melatonin consumption had no effect on the incidence of ED, which is consistent with the present study (22). The age of the study population may contribute to the differences between our study and other studies. Since the participants in this study were older and ED is directly related to age, the reduced effect of drugs like melatonin can be justified.

5.2. Strengths and Limitations of the Study

This study was performed in a comprehensive medical center, and AMT and MMSE were performed by a skilled psychiatrist to minimize possible measurement errors. The hospital has limitations when it comes to performing surgeries, which made it impossible to examine patients after heart surgeries and urology surgeries. Another limitation of the study was the lack of local anesthesia for these patients. Future studies are recommended to examine patients with more diverse surgeries and the difference between local and general anesthesia. Future studies should also prescribe medication after surgery in addition to prescribing it before surgery.

According to the results, ED levels decreased with clonidine and melatonin preoperatively, which was not significant compared to the control group. There was also no difference between melatonin and clonidine in preventing ED after surgery.

The authors would like to thank the Deputy of Research and Technology of Birjand University of Medical Sciences for support (Grant No.: 455465) and the Clinical Research Development Unit of Imam Reza Hospital for consultation and statistical assistance.

Copyright © 2022, Journal of Kermanshah University of Medical Sciences. This is an open-access article distributed under the terms of the Creative Commons Attribution-NonCommercial 4.0 International License (http://creativecommons.org/licenses/by-nc/4.0/) which permits copy and redistribute the material just in noncommercial usages, provided the original work is properly cited.
download pdf 712.51 KB Get Permission (article level) Import into EndNote Import into BibTex
Number of Comments: 0