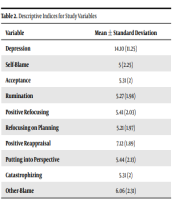 The Effect of Emotion Regulation on Predicting Depressive Symptoms in Students

Many people around the world have been affected by depression, which causes a great deal of problems. Emotion regulation refers to processes influencing emotion, experiences, and expresses.

This study aimed to evaluate the role of emotion regulation to predict depressive symptoms among Kermanshah University of Medical Sciences students.

This descriptive-analytical study was conducted on 305 students at Kermanshah University of Medical Sciences, Iran, who were randomly selected by convenient sampling method. The informed consent forms were signed by the participants. Then the Beck Depression Inventory - Second Edition (BDI-II) and the Cognitive Emotion Regulation Scale (CERQ-18) were completed in a virtual/face-to-face manner due to the COVID-19 pandemic. The data were analyzed with SPSS software version 26. A total of 296 participants were analyzed, of whom 198 (66.9%) were female, and 98 (33.1%) were male.

Among the most prevalent chronic diseases, depression can affect thoughts, mood, and physical state. The symptoms of depression include a decrease in mood, lack of energy, sadness, insomnia, and a lack of enjoyment in life (1). Depression manifests many of these signs and symptoms periodically, but chronic depression causes disease, functional impairment, and suicide (2).

Emotion and regulation play significant roles in psychotic disorders, including anxiety and depression (7). Literature have shown that impairment of emotion regulation could predispose the individual to problems, such as depression and anxiety (8). Emotion regulation refers to the processes affecting the type of excitement and feeling (9). Emotion regulation is “internal and external processes for monitoring, assessing, and modifying the emotional reactions, particularly in intensity and length to achieve the purpose” (10).

People’s emotional responses provide important information about their experiences with others. This information teaches students to behave in the face of emotions, how to express emotion fully, and what strategies to use in response to emotions and how to treat others in the field of special emotions (11). Symptoms of depression are caused by improper regulation of emotions among students. Negative emotions and stressful factors increase the probability of depression symptoms in students with depression disorders (12).

Although various studies have investigated the relationship between emotion regulation and depression in students, none investigated the relationship between cognitive emotion regulation strategies and depression disorders in the students of Kermanshah University of Medical Sciences, separately. Hence, the research hypothesis was that the occurrence of depression disorders is related to different emotion regulation strategies, including self-blame, acceptance, rumination, positive refocusing, refocusing on planning, positive reappraisal, putting into perspective, catastrophizing, other blame.

This study aimed to evaluate the role of emotion regulation in predicting depressive symptoms among students of Kermanshah University of Medical Sciences, Iran.

The study population included 305 nursing and midwifery students of Kermanshah University of Medical Sciences in 2020, who were selected by a random and available sampling. A short 18-item version of the Cognitive Emotion Regulation Questionnaire (CERQ-18) was administered after the participants provided their informed consent. Since this study was conducted during COVID-19, the questionnaires were completed by students in a virtual/face-to-face manner.

Garnefski and Kraaij first designed the CERQ-18 (13). The original version is composed of 36 items in a 5-point Likert scale ranging from 1 “never” to 5 “always”. This scale includes 18 distinctions and measures cognitive emotion regulation strategies in response to life-threatening and stressful events. Garnefski et al. reported the reliability coefficients of the questionnaire 0.87, 0.91, 0.93, respectively, using Cronbach’s coefficient alpha (13). According to item-total correlation tests of total score to each subscale’s score in Iran, the correlations ranged from 0.40 to 0.68 with a mean of 0.56, and all correlations were significant.

A correlation coefficient of 0.35 and 0.37 was determined by the General Health Questionnaire (GHQ) between negative coping strategies of emotion regulation and depression and anxiety scores, respectively, indicating that the questionnaire was valid, and all correlations were statistically significant (7). The total score of the questionnaire was between 18 - 90. Hassani (14) measured a Cronbach’s alpha of 0.68 - 0.82 and confirmed validity in all nine subscales of Persian CERQ-short. The principal component analysis (PCA) retained 75% of the variation present in all of the original variables and supported the nine-component pattern of the questionnaire.

There are five components to depression assessed in the questionnaire: emotional, cognitive, behavioral, physical, motivational, and suicidal thoughts. Individual scale items are scored on a four-point continuum in which 0 represents “at least” and 3 “most” (63 is the maximum score). A general principle attributes the ranges of 14 - 19 for mild depression, 20 - 28 for moderate depression, and 29 - 63 for severe depression. According to Rajabi and Karjo Kasmai (15), the reliability coefficients (Cronbach’s scale) were satisfactory for all materials and extracted components (15). The results showed that the coefficient of Cronbach’s alpha was 0.86 for the whole questionnaire and 0.84 and 0.78 for the first and second components, respectively (15).

SPSS software version 26 was used to analyze the data. The studied population frequency (percentage), mean, and standard deviation were used to examine qualitative and quantitative variables, respectively. The Pearson correlation was used to investigate the relationship between cognitive emotion regulation strategies and depression. In order to identify variables that have the greatest impact on depression symptoms, stepwise regression was used. A regression model was then developed to determine the influence of variables selected earlier. Mahalanobis distance (Md) was used to analyze extreme multivariate outliers.

The study population consisted of 305 participants, of whom 9 cases were excluded from the statistical analysis due to incomplete answers. A total of 198 participants (66.9%) were women, while 98 participants (33.1%) were men. The majority of participants (92.2%) were single, and 30 (42%) reported a history of using drugs related to mental disorders (Table 1).

Table 1. Demographic Characteristics of the Participants a

In addition, 72.8% of the participants were single, and 79% did not mention psychiatric disorders. Mahalanobis distance was used to analyze extreme multivariate outliers. The K2 table (df = 9) and P-values indicate that none of the data were outliers. The statistical assumptions were tested using a linear regression model and residual scatter plot. The data were analyzed by Pearson correlation and stepwise regression following the regression assumptions. Table 2 lists the mean and standard deviation scores of depression and emotion regulation strategies.

Table 3 demonstrates the Pearson’s correlation coefficient between study variables. In this table, the unadjusted cognitive regulation strategies, including self-blame and catastrophizing, are positively and significantly correlated with depression. On the other hand, there is a reverse and significant relationship between depression and adjusted cognitive regulation strategies such as positive refocusing, positive reappraisal, and putting it into perspective.

A depressed person uses strategies to regulate their discomfort, thus reducing their depressive symptoms, intensifying the effects of negative emotions, and making depression more prevalent (17). Depressed people greatly increase their blaming feelings and suppress the blaming feelings of others (18). Reports have indicated that people use ineffective strategies more than efficient behaviors, causing both women and men to use self-blaming, and catastrophizing strategies with a strong relationship based on past studies (14).

The strategy of positive refocusing someone can redirect the mind toward joyful and pleasant thoughts instead of the actual event, leading to decreased depression. Positive reappraisal interprets a condition as an opportunity for self-growth to reduce negative emotional experiences and behaviors (17, 19).

There are some similarities between the results of positive reappraisal and refocusing strategies conducted in Iran and other countries, and these strategies result in reduced depression levels, but there are discrepancies between acceptance strategy results (17). There is a positive relationship between this strategy and depression development because of these discrepancies. According to the results of this study, acceptance did not correlate with depression levels. Some researchers have claimed that the acceptance strategy could be adjusted or unadjusted depending on the individual’s psychology. People who feel disabled by their events and accept their problems without seeking to change them are more likely to develop depression (16).

People who feel positive and better emotionally after facing problems tend to concentrate on their activities, goals, and plans. In other words, people who face upsetting events do the best they can do at that moment to cope with the existing conditions. They think about changing the conditions and start planning and taking action to solve the problem (20). The perceived family support indirectly affects depressive symptoms through refocusing planning and positive reappraisal strategies. Based on these results, negative events are perceived as a challenge rather than a threat. People who feel connected to their families are able to see the positive aspects of unpleasant events and turn them into learning and strengthening experiences (21).

This study identified self-blame, positive reappraisal, catastrophizing, putting into perspective and positive refocusing as predictors of depression. Mohammadzade Ebrahimi et al. (22) demonstrated that adjusted cognitive emotion regulation strategies balance the relationship between stressful events and depression signs. In other words, those using these strategies have a weaker relation between stressful events and depression signs, while those using these strategies less commonly show a substantial relation (22).

The findings of this study cannot be generalized due to the limited population. Furthermore, the BDI is used only to investigate depression signs. Therefore, caution should be made to generalize the present results to clinically diagnosed patients with depression. Further studies should be conducted on populations of other age groups and occupations, as well as clinically depressed patients.

According to the results, there was a significant direct relationship between self-blame and catastrophic thinking as maladaptive strategies of cognitive emotion regulation with depression. In addition, positive refocusing, positive reassessment, and a small number had a significant negative correlation with depression among adaptive emotion regulation strategies.

Copyright © 2022, Journal of Kermanshah University of Medical Sciences. This is an open-access article distributed under the terms of the Creative Commons Attribution-NonCommercial 4.0 International License (http://creativecommons.org/licenses/by-nc/4.0/) which permits copy and redistribute the material just in noncommercial usages, provided the original work is properly cited.
download pdf 150.65 KB Get Permission (article level) Import into EndNote Import into BibTex
Number of Comments: 0