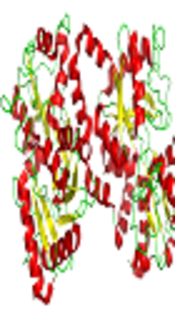 Antimicrobial peptides belong to a large family of bioactive peptides that play an important role in human health. Lactoferrin of transferrin family is considered to be a glycoprotein. Human lactoferrin has a length of 689 - 711 amino acid polypeptides. Lactoferrin plays a role in various biological activities such as anticancer, antibacterial, antiviral, antifungal, and anti-inflammatory activity, and also as an immune system regulator.

In this study, we examined the toxic effects of human lactoferrin-derived peptides on breast cancer cells in vitro using the web server Anticp. The results obtained from the Anticp web server showed that four peptides (P39, P40, P24, P66), out of the 70 peptides, had anticancer activity, and 66 peptides had non-anticancer activity.

The results showed that the activity of the cytotoxic peptides P39 and P40 was significantly higher than that of P38 on the breast cancer cells (P ≤ 0.001). Cancer cells treated with CC50 concentrations showed a percentage of the cells detached from the flask and surrounding cells as well as shrinkage and deformation on the surface. Also, apoptotic seeds inside the cells were observed with 40X magnification.

These finding demonstrated that P39 and P40 peptides could be appropriate candidates for in vivo testing as cytotoxic agents.

Antimicrobial peptides belong to a large family of bioactive peptides which play an important role in human health. These peptides are considered as emerging new therapeutic agents due to many factors such as their short length, short half-life, rapid action on bacteria, and low toxicity (1).

Research findings show that some antimicrobial peptides exhibit a large number of cytotoxic activities against cancer cells but have no toxic effect on normal cells. Lactoferrin, a protein belonging to transferrin family weighing 80 KD with 703 amino acids, has multiple physiological activities like anticancer, antibacterial, antifungal, and anti-inflammatory activity (2). Although the mechanisms involved in the anticancer activities of lactoferrin are not yet understood, there is no doubt regarding its anticancer activity. Therefore, we studied the cytotoxic activities of the peptides derived from human lactoferrin on normal and cancer cells.

Several computational methods are available for predicting the toxicity of anticancer peptides. These methods facilitate the designing of therapeutic peptides with high toxicity against cancer cell lines. They are usually based on machine learning methods (3). Machine learning method can predict anticancer peptides using three different algorithms including artificial neural network, quantitative matrices, and support vector machine (SVM). SVM model is a strong algorithm developed based on the amino acid composition and binary profile features (4, 5). Anticp is a website which determines the toxicity of anticancer peptides through SVM method. In the present study, we used the SVM algorithm to predict peptides with high and low toxicity (6). The cytotoxic activity of two peptides with high toxicity value and one with low toxicity value was studied against MCF-7 and MDA-MB-231 breast cancer cell lines and human embryonic kidney normal cell line (HEK293).

The anticancer activity of all the lactoferrin peptides derived was predicted using the Anticp web server computer program (crdd.osdd.net/raghava/Anticp). The SVM methods were applied to predict and classify the anticancer and non-anticancer peptides.

Two peptides with a high score and one with a low score were purchased, as synthetic peptides, from China Shine gene company, with a purity of > 75% and used without further purification. The peptides were stored at -4°C until they were used.

The cytotoxicity of the peptides P39 and P40 with high and P38 with low cytotoxic activity, isolated from lactoferrin protein, was examined using the MTT assay (7). The peptides were initially dissolved in deionized water and then diluted to prepare working concentrations of 10, 100, and 1000 μg/mL. The cells were grown in 96-well plates at a density of 5 × 104 cells per well. After incubation for 4 hours, the cells were treated with different concentrations of the samples and incubated for 72 hours. Then, 25 μL of MTT solution (5 mg/mL) was added to each well, and the plates were reincubated for 4 hours. Finally, the medium was removed, and 100 μL of DMSO was added to solubilize the formazan crystals. The amount of formazan crystal was determined by measuring the absorbance at 492 nm using a microplate spectrophotometer (Awareness Technology Inc Stat fax 2100). All assays were carried out in triplicate.

The data from the three independent experiments have been presented as mean ± SD. The CC50 value was calculated by Microsoft Excel 2013. One-way ANOVA was used, followed by a post-hoc test (DUNCAN) and repeated measure ANOVA. P value ≤ 0.05 was considered as the measure of statistical significance between samples. The cancer cells treated with CC50 concentrations showed a percentage of the cells detached from the flask and surrounding cells as well as shrinkage and deformation on the surface. Also, apoptotic seeds inside cells were observed with 40X magnification.

In this study, the cytotoxic activity of different peptides derived from the protein lactoferrin was evaluated. Peptides P24, P39, P40, and P66 were identified as anticancer peptides through the Anticp website. According to the findings of this study, these peptides are located in the position 230 to 670 of the protein and are most probably responsible for the anticancer activities of lactoferrin.

Two peptides, P39 and P40, of the four peptides were tested on breast cancer cell lines. The findings showed that these two peptides have high cytotoxic activity against MCF-7 and MDA-MB-231 cells even in in vitro condition. Recent studies have shown that antimicrobial peptides with anticancer activities can be good candidates for anticancer drugs. The anticancer effects of these peptides may, in general, occur either by membranolytic or non-membranolytic mechanisms. The basic mechanism of action of each membranolytic peptide is dependent on these characteristics as well as on the target membrane features, which in turn change the selectivity and toxicity of the peptides (8). Peptides like defensins, BMAP-27, and BMAP-28 show high cytotoxic activity against leukemia cell lines and breast carcinoma cells (9). The proliferation and viability of bladder cancer cells were decreased with cecropin A and B (10). Moreover, studies have shown that MagaininII has a selective anticancer potential and even displays obvious antiproliferative and cytotoxic activity on high-grade as compared with low-grade cancer cell line (11).

Reports show that these peptides can destroy cancer cells through electrostatic interactions between the cell membrane component and the peptide; moreover, peptides could stimulate apoptosis in cancer cells via mitochondrial membrane interference of subsequent uptake of peptides into the cytoplasm (12).

The results of the current study demonstrated that the cytotoxic activity of these peptides against MCF-7 and MDA-MB-231 cells was significantly more than that of the HEK normal cells (P ≤ 0.001).

A previous study done on the protein VSVG has shown that the peptides P27 and P28, derived from this protein, have high cytotoxic activity against breast cancer cells in in vitro condition. Moreover, the morphological changes and ladder pattern of DNA shows that these peptides can induce apoptosis (13).

Studies done on other anticancer peptides like BMAP-28 derived from cathelicidin show that these peptides can cause cellular death through apoptosis, making outlets in the mitochondria membrane and releasing cytochrome C (14). The anticancer activities of lactoferrin and lactoferrin nanoliposomes were demonstrated in Caco-2 cells using apoptosis induction (AO/EB staining), mitochondrial function (MTT assay), and count kit-8 (CCK-8) assays (15). Studies on lactoferricin B show that this peptide causes cellular death through apoptosis via the mitochondrial pathway (16).

The morphological changes seen as a result of the healing of cancer cells by cytotoxic peptides of lactoferrin protein (P39-P40) determines the apoptotic index. Since chemotherapy drugs play an important role in apoptosis induction, conducting more research on the role of such peptides in inducing apoptosis and their cytotoxic activity may perhaps lead to their introduction as cytotoxic agents.

The results indicated that P39 and P40 peptides could be appropriate candidates for in vivo testing as cytotoxic agents.

This research was supported by the department of biology, branch Falavarjan, Islamic Azad University, Isfahan, Iran.

Copyright © 2018, Journal of Kermanshah University of Medical Sciences. This is an open-access article distributed under the terms of the Creative Commons Attribution-NonCommercial 4.0 International License (http://creativecommons.org/licenses/by-nc/4.0/) which permits copy and redistribute the material just in noncommercial usages, provided the original work is properly cited
download pdf 276.10 KB Get Permission (article level) Import into EndNote Import into BibTex
Number of Comments: 0