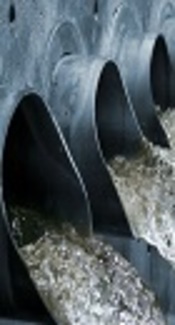 Antibiotics are among the most effective medications used to treat infectious diseases. The present study was conducted over six months on the municipal sewage in Hamadan Sewage Treatment Plant. Tests were carried out on six antibiotics commonly used in medical settings. Antibiotic sensitivity of Escherichia coli found in inlet sewage and outlet residue was assessed using disc diffusion technique and interpreted according to Kirby-Boer chart. According to the results, Escherichia coli was most resistant to AMX (100%) in inlet sewage and E (100%) and AMX (100%) in outlet sewage.

In recent years, people’s access to and use of various medications has increased throughout the world due to the spread of diseases, advances in medical and pharmaceutical sciences, and medical covers. Iran is one of the biggest medication users, and is considered among the first 20 countries in the world, and next to China, ranks second in Asia (1). The World Health Organization (WHO) estimates that 7700 kg of antibiotics are produced in the world every day. In terms of used vials in Iran, antibiotics are the most used medication group in the country, and make up for 15% of the total share of medication use (2). The high level of antibiotic use in medical settings, especially hospitals, leads to much contact between bacteria and antibiotic groups and makes bacteria resistant (3). Therefore, the main cause of the rising bacterial resistance to antibiotics in Iran is the haphazard administration and use of antibiotics (4). The WHO has reported the spread of antibiotic resistance as one of the three big risk factors threatening public health in 21 century. Antibiotic resistance can be transferred in the environment from pathogenic to non-pathogenic bacteria. Transfer of resistant genes occurs through plasmid, integrin, and transposons (5). Escherichia coli is one of the bacteria susceptible to antibiotic resistance, and is regarded as one of the indicators of fecal contamination. This bacterium is part of the natural human intestinal microflora, and one of the key members of Enterobacteriaceae family. Escherichia coli can cause various health problems as a non-pathogenic or a pathogenic bacterium in human and other organisms. Although no antibiotic is required for the treatment of this bacterium, many strains of this bacterium have shown resistance to multiple antibiotics, and this can be regarded as a major health concern (6). Hence, there is a need for careful epidemiological monitoring of this bacterium. Generally, the resistance rate of this bacterium is increasing, and various strains of this bacterium are causing certain diseases throughout the world (7).

Table 1. The Pattern of Antibiotic Resistance of E. coli Isolated from Inlet and Outlet of Hamadan Sewage Treatment Planta

Using the multiple antibiotic resistance (MAR) index can provide a significant potential in differentiating the source of bacteria in terms of medication resistance. In the present study, MAR index for the isolated E. coli was found using Equation 1. MAR values for E. coli isolated from inlet and outlet sewage are presented in Figure 1. 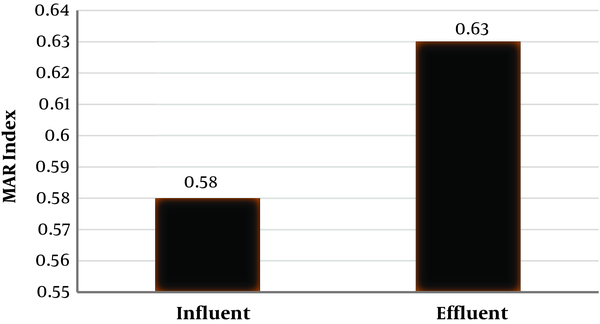 According to the present study results, most cases of E. coli antibiotic resistance in the sewage inlet to Hamadan Sewage Treatment Plant related to AMX with 100% and CFM and E with 82%, and the highest susceptibility related to CP with 73%. Also, most cases of E. coli antibiotic resistance in the sewage outlet to the sewage treatment plant related to AMX and E with 100%, and the highest susceptibility related to CP with 70%, which agrees with the study conducted by Mohammedi et al. (8). In agreement with the present study results, Jha in Japan showed that E. coli has the least resistance to CP (9). In a study conducted by Hadi et al. on antibiotic resistance of the bacteria isolated from municipal and hospital wastewaters in the city of Hamadan, the results showed the percentage of E. coli resistance to the studied antibiotics was between 1.81% and 51.02% (10), which is far less than the resistance found in the present study in 2017. In the present study, E. coli resistance to the antibiotics examined varied from 8% to 100% at inlet to Hamadan Sewage Treatment Plant, and from 30% to 100% at outlet from this plant. The difference could be due to the greater use of various antibiotics in Hamadan hospitals compared to 2010 and transfer of these antibiotics through hospital wastewaters to municipal sewage. MAR index for E. coli was 0.58 at inlet and 0.63 at outlet of Hamadan Sewage Treatment Plant. These values can be compared to those found in a study by Parveen et al. (11), which determined MAR value of 0.13 for E. coli isolated from municipal sewage. In the study by Hadi et al. (10) MAR value for municipal sewage was also found 0.13, which is less than that found in the present study. It can be seen that MAR value for E.coli found in the present study is greater than those found in studies conducted by Parveen et al. and Hadi et al., and this is very likely to be due to higher concentration and diversity of antibiotics in Hamadan municipal wastewaters compared to other studies, which leads to increased transfer of resistance factors in bacteria and accelerates multiplicity of resistance (11). Comparing the present study results to those obtained by Hadi et al. in 2010 shows a significant increase in E. coli antibiotic resistance over the last seven years, where E. coli resistance to common antibiotics such as AMX and E is very high, probably due to uncontrolled use of these antibiotics. Persistence of this trend can increase the likelihood of antibiotics becoming ineffective in bacterial infections, and entails spread of infections in the society. Lack of scientific supervision over self-administered antibiotics and easy access to these medications seem to be the key factors for reducing microbial resistance.

The present article is the result of a research project approved by Hamadan University of Medical Sciences (project No: 9504292440). The researcher wishes to express their gratitude to the university research deputy for funding this project.

Copyright © 2018, Journal of Kermanshah University of Medical Sciences. This is an open-access article distributed under the terms of the Creative Commons Attribution-NonCommercial 4.0 International License (http://creativecommons.org/licenses/by-nc/4.0/) which permits copy and redistribute the material just in noncommercial usages, provided the original work is properly cited
download pdf 142.27 KB Abstract XML Get Permission (article level) Import into EndNote Import into BibTex
Number of Comments: 0