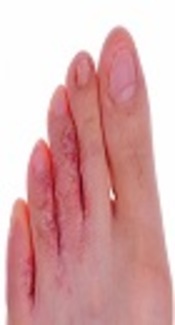 In patients with immunodeficiency, any fungus may be potentially pathogenic. In this study, fungal infections among immune compromised patients presenting to medical mycology lab of special clinic of Kermanshah University of Medical Sciences during 2013 - 2014 were studied.

In this cross-sectional study, data of all patients (personal information, time of visit, underlying diseases, infected site, smear and culture tests) presenting to medical mycology lab were collected. Data were entered into SPSS software and summarized.

The results showed that women and middle-aged people had higher odds of morbidity. Dermatophytosis is an important fungal and skin disease among surface and skin diseases. Opportunistic fungal infections in patients with acquired immunodeficiency are on the rise.

The medical importance of fungi as human pathogens is common knowledge. Nearly 200000 species of fungi have been identified, of which, only 100 are pathogenic to humans. Fungi that were not previously infectious to humans are now among ever increasing opportunist pathogens. Infections caused by fungi are wide-ranging, and depending on the site can be classified into five groups: Superficial, cutaneous, mucosal, subcutaneous, and visceral. Pathogenic fungi affect normal people, but opportunist fungi usually affect only people with underlying conditions (1). Some fungal infections are specific to certain regions. Some are wide spreading, and others are only seen in a specific sex, age group, race, jobs, or physical conditions (2).

Although extensive advances have been made in the treatment and prevention of pathogenic fungal infections, and their incidence has been slightly reduced, the incidence of opportunist infections has equally increased. Moreover, despite advances in the treatment of malignant and autoimmune diseases, and organ transplantation, which have increased the longevity of patients with immunodeficiency, a dramatic increase in opportunist fungal infections that were not much considered in the past is now being observed (1).

Dermatophytosis is a fungal complication of the keratinized epithelium of hair, nail and stratum corneum, resulting from dermatophytes. This disease is associated with varying inflammatory symptoms. Dermatophytosis or tinea is in fact one of the most important and common cutaneous fungal diseases with a worldwide distribution (2).

Dermatophytes are keratinophilic fungi from Gymnoascaceae family and Ascomycota strain, and are divided into three genera: Microsporum, Epidemophyton, and Trichophyton (3). Both physicians and mycologists need knowledge of regional dermatophytes and their prevalence for the diagnosis of tinea. The human and animal tineas are one of the main global issues, and broadly depend on the socioeconomic conditions. The regional variety of tinea depends on the anthropophilic or zoophilic varieties in that region. The anthropophilic dermatophytes such as Microsporum canis , Trichophyton mentagrophytes and Trichophyton verrucosum are today regarded as the main causes of human dermatophyte infections. As the main cause of tinea pedis, Trichophyton mentagrophytes are abundantly isolated from room floors. Sometimes, contact with contaminating epidermal materials in the environment infects susceptible people more than a direct contact with a patient (2).

Treatments include oral and topical treatments such as combined tolnaftate and topical imidazole (clotrimazole, miconazole, and fluconazole) (4). Diagnostic laboratory techniques include morphologic (5), serologic (1) and molecular (6) methods.

Any fungus in the environment can be potentially pathogenic for patients with immunodeficiency. Species of Aspergillus and Candida are main organisms in these patients (7). Underlying factors associated with the poor host defense against fungi include (1) Impaired epithelial protection (using a wide-spectrum or multiple antibiotics, catheters, peritoneal dialysis, burns, wounds, trauma, surgery, increased gastric pH, cytokines, and radiotherapy); (2) Deficiencies or dysfunction in mononuclear phagocytes, neutrophils, or other cells (radiotherapy, chemotherapy, aplastic anemia, chronic granulomatosis, and diabetes mellitus); and (3) Deficiencies or impairment in cell immunity (acquired immunodeficiency syndrome, Hodgkin’s disease, organ transplantation, radiotherapy, chemotherapy, leukemia, and the use of corticosteroids) (8).

The present descriptive cross-sectional study assessed all data relating to personal details, time of attendance, infection site, smear and culture test results, and other complementary diagnostic tests of patients attending the mycology laboratory of the special clinic of Kermanshah University of Medical Sciences between April 2013 and March 2014. All ethical considerations regarding the use of patients’ data were observed. Data from patients with immunodeficiency, diabetes, and other diseases were collected by referring to the laboratory record books. The patients’ examination method included direct microscopic test and culture in specific media. Variables included age (in eight groups; from under 10 year-old to over 70 year-old), gender, occupation, season of patient’s referral to laboratory, place of residence, underlying diseases (endocrine and metabolic diseases, immunologic and allergic diseases, malignancies, organ recipients, and other diseases), isolated fungus species (by direct observation, microscopic, and culture methods), and type of fungal disease (dermatophytosis, candidiasis, pityriasis, onychomycosis (Aspergillus), otomycosis (Aspergillus), actinomycosis, erythrasma, pneumocystosis, and rhodotorulosis).

In the course of the study between 2013 and 2014, a total of 325 patients with underlying diseases attended the mycology/medical laboratory of the university special clinic. The majority of referrals were women (204 patients, 62.8%) in the 40 - 59 years age group (131 patients, 40.3%). Of the 325 referrals with underlying diseases, 52.3% had fungal infections, with dermatophytosis (23.1%) as the most prevalent. Of the 170 patients with fungal infection, 52.4% had positive culture results. The most frequent fungus species according to culture results was Candida albicans (19.4%) (Table 1).

Table 1. Frequency Distribution of Fungal Infections in All Patients and Fungus Species (Culture Results) Isolated from Patients with Immunodeficiency Attending Special Clinic of Kermanshah University of Medical Sciences During 2013 - 2014 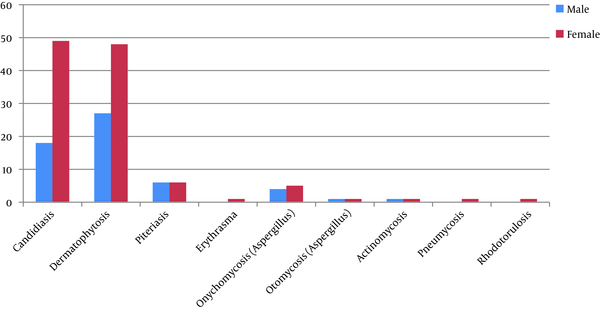 Table 2. Frequency Distribution of Fungal Infections by Occupation in Patients with Immunodeficiency Attending Special Clinic of Kermanshah University of Medical Sciences During 2013 - 2014

The highest frequency of candidiasis happened in summer (26.9%) and the lowest in autumn and winter (23.9% each). Dermatophytosis was most frequent in winter (32%) and least in summer (20%) (Table 3).

Table 3. Frequency Distribution of Fungal Infections by Season in Patients with Immunodeficiency Attending Special Clinic of Kermanshah University of Medical Sciences During 2013 - 2014

Table 4. Frequency Distribution of Fungal Infections by Underlying Diseases in Patients with Immunodeficiency Attending Special Clinic of Kermanshah University of Medical Sciences During 2013 - 2014

The present study included more women (66.5%), probably because women attend clinic more often and they have higher contact with water and humid environment. In a study by Edalatkhah et al. men and women were equally afflicted, and in Flahati et al. study, infection was reported in boys twice that in girls, which disagrees with the present study results (10, 11). These differences may be due to living conditions and the level of access to mycology laboratory and test requests by physicians. Candidiasis (43.4%) and dermatophytosis (42.5%) were the most frequent infections. Onychomycosis is the most common nail disease in adults, but it is rarely seen in children, except in children with fungal infections (tinea capitis). Nail candidiasis among children is mostly seen in younger children because they suck their nails, and in adults because of underlying diseases or constant occupational contact with water. Dermatophytosis (47.4%) and candidiasis (31.6%) were the most common infections in men.

In the present study, 22 patients (29.3%) had tinea corperis, while in the previous study conducted by Mikaeili et al. (2012), Tinea corperis was reported 40.6% (12). This frequency was also reported differently in Flahati study (11). This difference could be due to the difference in the type of contact, contamination location, and attendance season. Since contact with contaminated places is important for dermatophytosis infection, reducing this type of contact helps reduce infection. In a study conducted by Mikaeili et al. isolated dermatophytes species were reported Trichophyton verrucosis (51.6%), Trichophyton mentagrophytes (18.7%) and Epidermophyton flucosum (14.3%) (12), which are similar to their previous study results (2012).

The present study showed that housewives had the highest frequency of fungal infections (52.9%) and medical personnel had the lowest (1.2%), which is likely to be due to the fact that housewives make up the most referrals to mycology clinic of Kermanshah University of Medical Sciences. This high prevalence of housewives could also be due to their frequent contact with water and humid environments. However, being a housewife cannot be considered a risk factor for infection, but their high prevalence is probably due to the fact that most referrals to the mycology clinic are from this group. The low rate of infection among medical personnel clearly shows the role of people’s awareness in reducing infection. The highest frequency of fungal infections among housewives pertained to candidiasis (44.4%) and dermatophytosis (43.3%). In Mikaeili et al. study a significant percentage of the infected participants were housewives (37.4%), followed by students with 25 cases (12), which are similar to the present study results.

In some other studies, including Flahati et al. Microsporum canis was the most common species (11). The difference can be due to the difference in statistical population, living conditions, and type of contact with animals. In an epidemiological study conducted in India by Bhatia and Sharma on dermatophytes, 202 patients were selected for skin, hair, and nail examination. After culture, 74 cases (36.6%) were positive for dermatophytes species, and Trichophyton species with 98.6% of cases found to be the main cause of dermatophytosis, followed by Microsporum gypsum with 1.4%. No Epidermaphyton sample was found. Mentagrophytes (63.5%) was the dominant form of Trichophyton species (higher than that found in the present study), followed by Trichophyton rhuberum (35.1%) (17).

Opportunist fungal infections are almost exclusively seen in people with impaired natural defense mechanisms. Such infections are increasing compared to the past in patients with acquired immunodeficiency, invasive cancers, recipients of bone marrow transplantation, chemotherapy patients, long-term users of antibiotics, cytokines, immunosuppressant factors such as corticosteroids and procedures that reduce the body resistance against pathogens. Fungi are regarded as the main factors for increasing morbidity and mortality in patients with immunodeficiency. These opportunist and invasive infections can be severe or life-threatening for this group of patients. Proper treatment and follow-up reduce the chance of infection and mortality of patients with some degree of immunodeficiency who use immunosuppressive medications, which further predisposes them to opportunist fungal infections. Treatment regimens that boost the immune system and resistance against pathogens in underlying predisposing diseases such as endocrine and metabolic disorders (diabetes and hypothyroidism) can overcome such troublesome factors.

The most important limitation in the present study was the lack of access to rural areas with less diagnostic-medical facilities compared to the center of the province. Such patients outside the center can be identified and treated by proper and early screening. Moreover, more accurate results can be provided from the statistical population with fungal infections in the province.

Copyright © 2018, Journal of Kermanshah University of Medical Sciences. This is an open-access article distributed under the terms of the Creative Commons Attribution-NonCommercial 4.0 International License (http://creativecommons.org/licenses/by-nc/4.0/) which permits copy and redistribute the material just in noncommercial usages, provided the original work is properly cited
download pdf 104.49 KB Abstract XML Get Permission (article level) Import into EndNote Import into BibTex
Number of Comments: 0