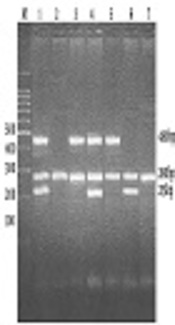 The present study was conducted to examine the relationship between GSTs polymorphisms and type 2 diabetes mellitus (T2DM), and to investigate the presence of GSTM1 and T1 genotypes in 176 T2DM patients and 174 healthy cases as controls.

Multiplex PCR was used to confirm the presence or absence of GSTT1 and M1 genotypes.

The obtained results indicated that the polymorphism of GSTM1 and GSTT1 does not affect the prevalence of T2DM in the study population.

Type 2 diabetes mellitus (T2DM) is the most prevalent type of diabetes that involves nearly 4% of the world population. This disease has a multifactorial origin that includes genetic and environmental agents (1).

This disease is characterized by metabolic irregularities causing long-term negative effects on the eyes, kidneys, nerves, and blood vessels (2).

Increased levels of toxic substances and decreased antioxidant defense have been observed in T2DM (6-8). These situations can lead to oxidative stress with significant effects on diabetes prolongation (9-11).

Different genes are recognized to contribute to reducing the effect of toxic substances produced in oxidative stress (12-14), including one that produces Glutathione S-transferases (GSTs) as a multifunctional detoxification enzyme which defends cells against harmful effects caused by chemicals, metabolites and oxidative stress (15).

Several studies have identified GSTs polymorphisms as a risk factors for T2DM among different populations.

Given that oxidative stress plays a role in developing diabetes, GTS reduces oxidative stress in the body. The present study examined the association between this enzyme polymorphism (GSTT1 and GSTM1) and the prevalence of diabetes in the population of western Iran.

The present case-control study was performed in Kermanshah, Iran. The study participants comprised 176 patients, including 100 females and 76 males, aged 55.2 ± 11.5 years, with T2DM confirmed by clinical tests, and 174 control volunteers, including 102 females and 72 males aged 55.3 ± 11.2 years and proved by their medical history and laboratory tests not to have developed T2DM.

In the present study, the case group included T2DM patients with a fasting blood sugar (FBS) of at least 126 mg/dL and a 2hpp glucose of at least 200 mg/dL. Moreover, patients with type 1 diabetes, alcoholics, smokers and pregnant women were excluded from the study.

All the diabetics and controls were selected from the Regional Reference Laboratory, afﬁliated to Kermanshah University of Medical Sciences. Furthermore, the study was approved by the University Ethics Committee, and the participants submitted their consent forms prior to the commencement of the research.

Five mL of venous blood was taken and transferred to a test tube containing ethylene diamine tetra acetic acid (EDTA). Then leukocytes were isolated form the samples and their DNA was extracted.

The multiplex PCR technique helped detect the presence of GSTM1 and GSTT1 genes in the samples. Dihydrofolate Reductase (DHFR) locus was used as internal control.

PCR amplification was performed when GSTM1 and GSTT1 were found to be present in the DNA genome of the case and control samples. Table 1 presents the demographic characteristics of T2DM patients (n = 176) and the controls (n = 174). According to these results, the cases and controls showed no statistically significant differences in terms of age and gender (P > 0.05).

Table 1. Characteristics of Patients and Controls

Table 2 presents the prevalence of GSTM1 and GSTT1 in the cases and controls.

Table 2. Frequency of GST M and GST T Genotypes in Patients and Controls

The prevalence of GSTM1-null was found to be 45.5% and that of GSTT1-null genotype to be 8.65% in the T2DM patients, whereas in the control group, the frequency of null genotypes of GSTM1 and GSTT1 was calculated as 48.3% and 17.75%, respectively.

All the results obtained indicate that genotype distributions in the controls followed the Hardy-Weinberg equilibrium.

T2DM is a harmful and globally prevalent disease. The disease complications exacerbate by different factors, including aging, prolonged obesity and decreased mobility (16).

Oxidative stress significantly affects the development of this disease (17). Given that β-cells carry a small amount of antioxidant agents, they are very susceptible to reactive oxygen species (ROS) damage. Ascented ROS can therefore play a key role in β-cell failures and the prolongation of insulin resistance and diabetes mellitus (17).

GST is an antioxidant enzyme that is responsible for protecting cells against oxidative stress by catalyzing the conjugation of glutathione to an extensive range of electrophiles (18).

According to the obtained results, no significant relationships were observed between GSTM1-null genotype and T2DM in the study population (45.5% vs. 48.3 %).

No significant relationships were also observed between GSTT1-null genotype and T2DM in the study population (8.65% vs. 17.75 %).

Several studies have been conducted in different populations, and different results have been obtained on the relationship of T2DM with the polymorphisms of GSTM1 and GSTT1.

In contrast to the present research, the study conducted by Moasser et al. (2) in southern Iran indicated that an increase in the GSTM1-null genotype can be associated with the pathogenesis of T2DM. Moreover, the studies conducted in Turkey and North India found GSTM1-null genotype to be a risk factor for developing T2DM (19, 20).

In line with the present findings, Chinese and Egyptian researchers (21, 22) found no significant differences between the GSTM1 genotype of the controls and the patients with T2DM; nevertheless their reports indicated that an increase in GSTT1-null is associated with developing T2DM.

A study by Amer et al. showed that the prevalence of GSTM1 and GSTT1 genotypes notably differs between T2DM patients and the controls in Egypt. Moreover, the combined genotype of GSTM1-null/GSTT1-null was found to increase the risk of developing T2DM (23).

A large body of research suggests that GSTs are essential for protecting DNA against harmful compounds that produce oxidative stress, and that the lack of these enzymes can cause susceptibility to many diseases (24), which has been proved to be associated with different environmental and genetic factors (25). Research suggest that different agents contribute to different levels of susceptibility to diseases in different populations, including physical activity, nutrition, stress, alcohol consumption, ethnic history and environmental conditions.

The present study showed that the frequency of GSTM1 and GSTT1 genotypes does not affect the prevalence of T2DM in the population of western Iran.

The authors would like to express their gratitude to the employees of the Western Regional Reference Laboratory for collaborating with this project.

Copyright © 2018, Journal of Kermanshah University of Medical Sciences. This is an open-access article distributed under the terms of the Creative Commons Attribution-NonCommercial 4.0 International License (http://creativecommons.org/licenses/by-nc/4.0/) which permits copy and redistribute the material just in noncommercial usages, provided the original work is properly cited.
download pdf 366.92 KB Abstract XML Get Permission (article level) Import into EndNote Import into BibTex
Number of Comments: 0