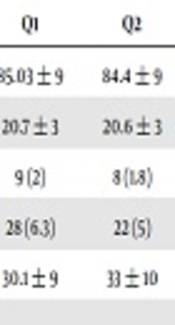 The prevalence of central and general obesity is increasing to epidemic levels and turning to a social health problem. A possible association may exist between nutritional adequacy and obesity.

This study aimed to investigate the relationship of general and central obesity with diet quality in Iranian women by 2010 version of Healthy Eating Index (HEI-2010).

A total of 460 women aged 20 - 50 years old participated in this cross-sectional study. Dietary intake data was collected using a validated food frequency questionnaire. Anthropometric assessment was performed by standard methods and HEI-2010 was used to investigate diet quality. The association between HEI-2010 and general/central obesity was analyzed by logistic regression.

Lower risk of general and abdominal obesity is associated with a higher quality of dietary intake. Furthermore, the nutrition education programs for preventing obesity should be emphasized to promote higher intakes of dairy, fruits and vegetables and preventing high consumption of energy-dense foods and sodium.

Overweight and obesity rates have dramatically increased through the past decades (1). A meta-analysis in 2017 reported the mean prevalence of obesity in > 18-year-old Iranian adults as 15.1% between 2000 and 2013 (1). Excessive body weight is associated with numerous chronic diseases including diabetes, metabolic syndrome, cardiovascular diseases, and cancer (2, 3) and higher mortality rates have been reported among obese people (4, 5). Body mass index (BMI) is generally used in determining general obesity, while waist circumference (WC) reflects the central obesity and is used for evaluating health risk (6).

Abdominal obesity, as one of the components of metabolic syndrome, is introduced as a major risk factor for cardiovascular diseases and the first cause of mortality, particularly in developing countries (6). Recent epidemiological studies of health outcomes including obesity and diet have changed the focus to overall diet quality and dietary pattern rather than individual nutrients due to the antagonist or synergistic effects of various nutrients on developing or preventing diseases (7, 8). Nutritional adequacy is a scale for assessing the overall quality of diet and adherence to dietary guidelines (9-11). Healthy dietary patterns can predict obesity (12) and previous research has reported relationships between HEI and risk biomarkers of diseases. Inverse relationships have been also reported between HEI and some inflammatory indices (13-15).

Total HEI score provides an estimate of overall diet quality, while its component scores help study important components of diet (16). Hence, this study aimed to assess the relationship between HEI and the component scores as well as central and general obesity among adult women living in Tehran, Iran.

According to a study that assessed the relationship between diet quality and metabolic syndrome (9) in women presenting to the Endocrinology Center of Tehran University of Medical Sciences, the study population was calculated using below equation:

The study population was increased to 460 women aged 20 - 50 years from 20 municipal regions in Tehran in order to increase the accuracy of this cross-sectional study. Participants were selected using the stratified random sampling.

Inclusion criteria were age ranging 20 - 50 years and residing in Tehran. Exclusion criteria were neuroendocrine and metabolic disorders, renal and liver diseases, pregnancy and lactation, or on any particular diet at sampling time due to cross-sectional nature of the study, or dissatisfaction with continuing participation in this study.

Written informed consent was obtained from all participants. The study protocol was approved by the Ethics Committee of the National Nutrition and Food Technology Research Institute, Tehran, Iran.

Trained dietitians assessed dietary intake with a valid and reliable semi-quantitative 168-item food frequency questionnaire (FFQ) through face-to-face interview (17, 18). The consumption frequency of each food item was collected on daily, weekly, monthly and yearly basis and then converted to daily intake frequency (19). The portion size of each consumed food item was converted to grams using the United States Department of Agriculture Food Composition Databases (USDA FCT) and the energy and nutrient content of foods were calculated. However, for traditional Iranian food items which were not listed in the USDA database (e.g. traditional breads), the Iranian FCT was used alternatively.

bIncludes all forms except juice.

cIncludes any beans and peas (called legume in HEI-2005) not counted as total protein foods (called Meat and beans in HEI-2005).

dIncludes all milk products such as fluid milk, yogurt and cheese and fortified soy beverages.

eIncludes beans and peas (and not vegetables) when the total protein food (called meat and beans in HEI-2005) standard is otherwise not met.

fIncludes seafood, nuts, seeds, soy products (other than beverages) as well as beans and peas counted as total protein foods.

Weight was measured using a digital scale (Seca, Germany) to the nearest 0.1 kg while participants wore light clothes and no shoes. Height was measured barefoot with a precision of 0.1 cm using tape meter ﬁxed to wall. BMI was defined as weight (kg)/height (m)2 and general obesity was considered as overweight and obesity (BMI ≥ 25) (21). In addition, WC was measured at the level of the umbilicus and by a non-stretch flexible tape line muscle-bound without imposing any pressure to the body while standing at the end of a normal expiration (22).

Data was analyzed via the Statistical Package Software for Social Science, version 21 (SPSS Inc., Chicago, IL, USA). Analysis of variance (ANOVA) and chi-square tests were used for comparing general baseline characteristics according to HEI-2010 total score quartiles. Logistic regression models were used to assess the relationship between HEI-2010 total score and its components as well as central and general obesity (considering samples as overweight/obese and non-obese and with central obesity or normal) in different models. The relationships between WC and BMI variables with adherence to HEI-2010 components and its total score were assessed using linear regression and adjusted for confounding variables (total energy intake, marital status, age, education, smoking and income). P value ≤ 0.05 was considered as statistically significant.

The frequency of general and central obesity was 15.1% and 21.5%, respectively. The majority of participants (approximately 74.8%) had low HEI-2010 total score.

Table 2 shows the major characteristics of study participants and HEI-2010 components according to quartiles of HEI-2010 total score. Age (36.0 ± 9 vs. 30.1 ± 9) was higher in the highest quartiles of HEI compared to the lowest quartile. There were no significant differences regarding tertiles neither for socio-economic variables nor for anthropometric indices. Furthermore, the scores of almost all of HEI-2010 components were higher in the highest quartile (and in the third quartile for green and beans), except for total protein and fatty acid scores which were not significant.

Table 2. Descriptive Characteristics of the Study Participants According to HEI-2010 Quartilesa

cThe amounts are frequency (No.) and % of total measured by Pearson chi-square test.

Table 3. Modified Multivariable Linear Regression for HEI-2010 Total Score and Components According to WC and BMI Among Tehran Adult Womena

eP value is considered significant if ≤ 0.0.

Table 4. Modified Multivariable Logistic Regression for HEI-2010 Total Score and Its Components According to Central Obesitya

dFirst quartile is considered as reference.

Total trend of central obesity was significantly decreasing across the quartiles of total HEI-2010, empty calorie and refined grain scores, and also after summating the scores of total and whole fruits and vegetables (probably due to the total vegetable score, which is not presented in Table 4).

The study findings showed a negative relationship between HEI-2010 diet quality index, and the chance of general and abdominal obesity.

To our knowledge, this is the first study assessing the relationship of the 2010 version of HEI with general and central obesity in a population-based sample of Iranian women.

Overall, higher HEI-2010 total score and lower chance of obesity were consistent with previous studies including Multi-Ethnic Study of Atherosclerosis on 6814 men and women aged 45 - 84 years from 6 US sites (24), the NHANES III (7), and Baltimore Longitudinal Study of Aging on Americans (25).

However, the Iranian cohort of Tehran Lipid and Glucose Study (17), another article from Isfahan province of Iran on 410 young female students aged 18 - 28 years (11) and also the Framingham Offspring/Spouse study3 (FOS3) (26) did not find any significant relationship between diet quality indices and obesity, which may be due to sample size and different scoring patterns.

Since all components of HEI-2010 do not similarly predict the relationship between general and central obesity, each component was separately investigated.

Socio-economic indices were not significantly related to the HEI-2010, but it appears that aging may significantly influence better choices of healthy foods. This finding also agrees with that in the Iranian cohort of Tehran Lipid and Glucose Study (TLGS) 2010 (17).

Investigating the components in detail showed that increased sodium score was negatively related to general obesity. According to available evidence, high sodium consumption is associated with a higher risk for overweight/obesity (27) and an inverse relationship exists between sodium intake and HEI-2010 (21). This association can be attributed to the fact that high levels of sodium are associated with increased adipocyte mass and insulin sensitivity (in rats) and increased insulin resistance and prevalence of metabolic syndrome in humans (28).

Among the adequacy components, dairy score was negatively related to WC and BMI; as a valuable predictor of central and general obesity. The reverse relationship between dairy consumption and obesity may be due to the calcium content and particular fats and bioactive peptides which was proven before (29).

In addition, the score of fatty acid (mono and poly saturated ratio to saturated fats) was negatively related to BMI at the crude model, but not significantly when adjusted for other confounders in this study. One-point increase in saturated fat score (HEI-2005) may be related to 3.1% decrease in abdominal obesity risk (7). This can be explained as a higher HEI component score for this nutrient shows meeting or close to meeting recommendations of 10% or less of energy from saturated fatty acids (7), which has been proven to be associated with obesity (30).

Another finding among the HEI moderation subgroups was negative relationship of refined grains and empty calorie scores with WC and BMI anthropometric indices, when the socio-economic factors and total energy intake were adjusted. As mentioned before, energy intake can seriously affect this scoring system and should be considered.

The trend of central obesity according to the score of total fruit, whole fruit and total vegetables in combination was decreasing especially with regard to total vegetables score (similarly due to fiber and antioxidant content) (25). These findings are consistent with NHANES III study on American males and females (25).

The results of the present observational study should be interpreted cautiously for its self-reporting nature and possible under- and over-estimation of particular food items. Furthermore, according to the HEI scoring system, even those who consumed more than the recommended amount of food groups received full score, which may be considered a limitation because they were not approved according to the cut-offs (21). In addition, the existing criteria for abdominal obesity diagnosis for the Asian adult population is ≥ 88 cm for women, which was not considered in this study. Alternatively, the current study provides novel information regarding the relationship of a diet quality index and its components with obesity. Other strengths of the current study are a high participation rate (89%), population-based sampling and adjusting various confounders especially socio-economic status, which influenced the results.

This study reports new findings about HEI-2010 diet quality index and obesity in an Iranian population. Overall, the results showed a lower risk of general and abdominal obesity with higher quality of diet. In addition, higher intakes of dairy, fruits and vegetables and preventing high consumption of empty calorie foods, sodium, saturated fatty acids and refined grains are recommended to reduce obesity. Therefore, probably the components of a diet quality index can be independently beneficial for weight management. Considering our cross-sectional method, future research is recommended to examine the relationship of adiposity with HEI-2010 and its component scores in larger sample sizes.

This study is related to the project NO. 1395/72856 from Student Research Committee, Shahid Beheshti University of Medical Sciences, Tehran, Iran.

Copyright © 2019, Journal of Kermanshah University of Medical Sciences. This is an open-access article distributed under the terms of the Creative Commons Attribution-NonCommercial 4.0 International License (http://creativecommons.org/licenses/by-nc/4.0/) which permits copy and redistribute the material just in noncommercial usages, provided the original work is properly cited.
download pdf 211.89 KB Get Permission (article level) Import into EndNote Import into BibTex
Number of Comments: 0