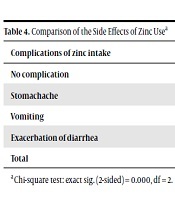 Gastroenteritis is one of the most common infectious diseases among children and is one of the leading causes of infant mortality worldwide. Studies show a relationship between zinc deficiency, malnutrition and diarrhea in children. Zinc is an essential element that plays a key role in the immune system.

The aim of this study was to evaluate the baseline serum zinc level of children with gastroenteritis and compare it in children with other diseases.

This cross-sectional study recruited 160 children aged 1 to 5 years presenting to Dr. Kermanshahi Hospital in autumn 2017. In this study, two groups of children were selected: those with gastroenteritis (n = 80) and those with other diseases (n = 80) and their baseline serum level of zinc was measured using Birex Fars kit and automatic calorimeter, and compared.

Findings showed that 53.8% of the participants had a history of zinc use (more than a month before) and 46.2% had no history of zinc use. There was no statistically significant relationship between serum zinc level and age. In addition, no significant difference was observed in serum zinc level in patients with gastroenteritis and patients with other diseases (P = 0.840). Also, 65% of the samples in the gastroenteritis group and 70% of the samples in the other diseases group had normal zinc level which showed no significant difference (P < 0.05).

Gastroenteritis is one of the most common infectious diseases among children such that it accounts for 10% of hospitalizations for children under 5 in the US. Symptoms of acute gastroenteritis depend on its pathogen but they often include diarrhea, vomiting, abdominal pain, and fever (1). Almost all of its causing agents are viruses, although bacteria and parasites may also be involved (2). Rotavirus is the most common cause of gastroenteritis in children both in developed and developing countries (3). The incidence of infectious diarrhea in children under two years in developing countries is estimated at 3.5 to 7 episodes per year and 2 to 5 episodes in the first 5 years of life (4). Diarrhea is one of the leading causes of child mortality worldwide, with statistics showing that about 4 million children suffer from diarrhea each year, and about 2.2 million children die of diarrhea-induced dehydration annually, of whom over 80% are under 5 years of age (5). According to UNICEF statistics, the current mortality rate for diarrhea in children under 5 years of age in Iran is 4% (6). The Centers for Disease Control developed a guideline for managing diarrhea in children for the first time in 1992, highlighting the importance of zinc in the treatment of diarrhea in children (7). Studies show a close association between zinc deficiency, malnutrition, and diarrhea in children. This micronutrient stabilizes the cell membrane, so its deficiency results in a disorder in the intestinal mucosa and an increase in permeability (transport of water and electrolytes) and loss of water (8). Although ORS powder has long been introduced as a basic and effective treatment for diarrhea in children, since this treatment does not affect the duration of treatment for diarrhea in children, the WHO, UNICEF, and USAID protocols suggested adding this element to the treatment of diarrhea in children, because studies revealed that zinc could reduce the duration and severity of diarrhea, in addition, adding zinc supplements for 10 to 14 days also decrease the episode of diarrhea over the next 2 to 3 months (9). Zinc and its salts are absorbed in small amounts by the gastrointestinal tract (30%) and mainly accumulate in red and white blood cells, muscles, bones, skin, etc. (10). That is why WHO and UNICEF recommend 20 mg zinc supplement daily for 10 to 14 days in children with acute diarrhea, while this dose reduces to 10 mg for infants under 6 months old. One of the side effects of zinc is the interference with the absorption of other elements including iron, magnesium and copper. Other complications include stomachache, heartburn, nausea, and rarely fever and fatigue (11). Normal serum levels of zinc are considered greater than 64 - 110 μg/dL (12).

Given there are numerous articles on the efficacy of zinc in the treatment of acute diarrhea in children, some studies contradict these findings. Therefore, we decided to evaluate the serum level of zinc in 1 - 5-year-old children hospitalized due to gastroenteritis in Dr. Mohammad Kermanshahi Hospital in Kermanshah and compare it with the initial level of zinc among 1 - 5-year-old children hospitalized due to other diseases without gastroenteritis.

We studied children of 1 - 5 years old with gastroenteritis hospitalized in Dr. Mohammad Kermanshahi Hospital. We measured the baseline serum levels of zinc on the first day of admission in both patients with gastroenteritis and those without gastroenteritis, and compared the two groups. If zinc level was normal (64 - 110 µg/dL), no additional zinc was administered. The purpose of this test was to measure the initial level of zinc in the two groups of patients with diarrhea and with other diseases presenting to the hospital, and it was performed in the laboratory of Dr. Mohammad Kermanshahi Hospital. The number of samples was calculated according to the following formula:

Mean ± SD: Zinc level in children with gastroenteritis before admission.

Mean ± SD: Zinc levels in children with other diseases before admission.

The following information was recorded in a form: age, sex, baseline serum level of zinc, length of hospitalization and frequency of defecation, history of zinc use in the past three months, and reasons for zinc use (due to illness or as a supplement).

The kit is ready-made, and can be used until expiry date if kept unopened at 2 - 8°C in a dark place. Blood, urine and serum samples are tested and EDTA (heparin) is not applied as anticoagulant. The specimens are stable at 2 - 8°C for 5 days. The test is performed at a wavelength of 546 nm, at 37°C and 1-cm cuvette, with Plank solution. The data and results after the intervention were entered into and analyzed in SPSS V. 23. Results are reported as frequency and percentage, mean and standard deviation, and significance level of 5% for chi-square and Mann-Whitney tests.

In this study, 160 children presenting to Dr. Mohammad Kermanshahi Hospital in Fall 2017 were selected in two groups: 80 patients with gastroenteritis and 80 patients with other diseases. Among them, 89 subjects were male (55.6%) and 71 female (44.4%). Chi-square test showed no significant difference between the two groups (P = 0.752).

Eighty-six patients reported a history of zinc use in the past (53.8%), 53 of whom were in the gastroenteritis group and 33 in the other group. Chi-square test showed a significant difference between the two groups. (P = 0.02)

Table 1 shows no statistically significant relationship between mean serum zinc level and age of patients. Also, there was no significant difference between mean baseline level of zinc in the two groups of gastroenteritis patients and other patients. (P = 0.84)

Table 1. Comparison of Mean Baseline Zinc Level with Age and Type of Disease

No statistically significant difference was observed in the three groups of low, normal and high zinc level in the two groups of patients with gastroenteritis and other diseases (P = 0.05) (Table 2).

Table 2. Comparison of Three Serum Zinc Levels and the Two Groupsa, b

Table 3 demonstrates a statistically significant relationship between the history of zinc use and high level of zinc.

Table 3. Comparison of History of Zinc Use and Three Levels of Zinca, b

Eighty-six of the samples had a history of zinc use, which was significantly related with zinc complications (P = 0.000) (Table 4).

Table 4. Comparison of the Side Effects of Zinc Usea

Most participants (67.5%) had normal serum zinc level: 65% in the gastroenteritis group vs. 70% in the other group, and there was no statistically significant difference between the two groups.

Taghavi-Ardakani et al. reported a lower mean serum zinc level in children with acute watery diarrhea who stayed in the hospital and had diarrhea for more than three days (15).

Thirty-four percent of the 86 children who reported a history of zinc use in the past experienced complications of abdominal pain, vomiting, and exacerbation of diarrhea. Lucacik et al. reported that oral zinc administration decreased the duration of diarrhea but increased the incidence of vomiting on day 3 in these children (16).

Patel revealed that oral zinc decreased the duration of diarrhea in 19.7% of the participants but had no significant effect on stool frequency; furthermore, it increased vomiting in children (17). These findings are consistent with our study findings that show overdose has side effects.

Other relevant studies, including the study of Parto et al. Showed that oral zinc supplementation in diarrhea (in 11180 patients) significantly reduced the duration of diarrhea but had no effect on stool volume (18).

A study by Taee et al. in Khorramabad reported that supplementation had no effect on severity of diarrhea except on the sixth day (19).

In Ghotbi et al.’s study, diarrhea frequency was not significantly different between the intervention and control groups except for the 7th day during the 10-day follow-up, therefore, they concluded that zinc sulfate had no effect on acute diarrhea (20). The findings in this study confirm the obtained results in our research.

Based on the findings of our study, many children have normal zinc levels and do not need extra zinc except in special cases, and it is best to measure zinc before prescribing it. We also observed patients with diarrhea had normal (67.5%) or higher than normal (19.3%) zinc levels. Therefore, considering the sum of these two results (86.8%), there is no need for the initial administration of zinc because it does not affect recovery. Therefore, before the initial blind administration of zinc, it is necessary to measure the baseline zinc level of the patients (children) and then apply the zinc syrup if needed.

Copyright © 2019, Journal of Kermanshah University of Medical Sciences. This is an open-access article distributed under the terms of the Creative Commons Attribution-NonCommercial 4.0 International License (http://creativecommons.org/licenses/by-nc/4.0/) which permits copy and redistribute the material just in noncommercial usages, provided the original work is properly cited.
download pdf 186.79 KB Get Permission (article level) Import into EndNote Import into BibTex
Number of Comments: 0