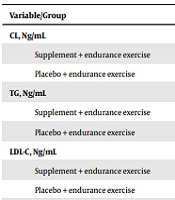 The present study was conducted to determine the effect of endurance training with strawberry extract supplementation on inflammatory markers and the lipid profile in healthy inactive women.

According to the results obtained and the benefits of dried strawberry powder on cardiovascular risk factor control, supplementation following exercise training are recommended for improving the physiological function of inactive people who are prone to dyslipidemia and inflammation.

Cardiovascular diseases are currently one of the major causes of mortality in the world. Considering the relationship of serum lipids and inflammation with heart attack, the regulation of blood lipid and inflammation is a significant factor contributing to health (1).

Physical activity helps reduce body fat and positively affects blood lipids. The absence of a proper diet, especially one rich in natural fruits, can be a factor associated with cardiovascular diseases, lipid disorders and inflammation. Strawberry reduces oxidative and inflammatory markers and blood pressure (2, 3) and increases the HDL content to high potassium content and neutralizes the effect of sodium (4). The anthocyanin, quercetin antioxidant, fiber and vitamins present in fruits, especially in strawberries, can help control and prevent these and any related diseases (5).

Given the positive role of strawberries in the prevention of inflammation and cardiovascular diseases, the growing tendency of people toward herbal food supplements along with physical activity, the association of inflammatory markers and lipid profile with endurance exercise and supplements and the absence of comprehensive studies in this field, conducting more extensive studies on the effect of physical activity and the consumption of strawberries on obesity and its related factors, especially the lipid profile and inflammatory markers, appears essential. The present study was carried out to investigate the effect of endurance exercise along with strawberry extract on inflammatory markers and the lipid profile in overweight and inactive young women.

The study was approved by the Human Subjects Committee of Kurdistan University of Medical Sciences, Sanandaj, Iran, in 2019. After submitting their informed content, 24 untrained young female university students with a mean age of 23.92 ± 2.8 years and BMI of 26.52 ± 0.98 kg/m2 randomly volunteered to participate in the study. The exclusion criteria consisted of the following: Recent fractures, uncontrolled hypertension, cardiovascular diseases, smoking, corticoid therapy, hormone abnormalities, drug history and the lack of regular resistance exercise. The subjects were divided into experimental and control groups using simple random sampling, were homogenized based on certain anthropometric indices and received either strawberry extract supplements or placebo.

On the day of the test, the subjects started warming up by exercise and stretching for 10 minutes. They then performed endurance exercise on a treadmill for 30 minutes within 60% - 70% of the maximum heart rate. They then took 10 minutes to cool down (Table 1) (6).

Ten-mL fasting blood samples were taken from the subjects in three steps (baseline, pre-test and post-test) in the morning. After the baseline anthropometric measurements and blood-sampling, the experimental and control groups were administered either the supplement or the placebo. At the end of the 14-day period, blood samples were taken again similar to the method used at baseline. The next day, both groups performed endurance exercise, and their blood samples were re-taken as the post-test in similar temporal and thermal conditions. The blood samples were centrifuged in EDTA tubes. The plasma clot was removed, poured into a microtube and placed in the freezer at 70°C. The lipid profile was measured by enzymatic staining using Pars Azmoon kits. Fibrinogen was quantified by the Clauss test using ACL kit.

Table 2 presents the descriptive and physiological characteristics of the study subjects in the different stages along with their changes.

Table 2. Mean ± SD of the Physiological Characteristics of the Different Groups

As shown in Table 3, significant changes were observed in the lipid profile (cholesterol, triglyceride and HDL-C) and fibrinogen level of the participants in different stages of the study (baseline, pre-test, and post-test).

Table 3. The Changes in the Lipid Profile and Fibrinogen Level of the Participants in the Different Stages

aSignificant difference between the baseline and pre-test.

bSignificant difference between the pre-test and post-test.

cSignificant difference between the baseline and post-test.

The results showed that fibrinogen concentration reduced in the supplement plus endurance exercise group in the pre-test compared to the baseline and increased non-significantly in the post-test after one session of endurance exercise, which is in line with the results obtained by Habibian and Bakhtiar (8), Hejazi et al. (9) and Ahmadizad and El-Sayed (10) and in contrast with the findings of Yadegari et al. (11) and Marefati and Nabi Pour (12). The present findings also showed an increase in fibrinogen concentration in inactive women immediately after endurance exercise. A great part of this disparity in findings can be attributed to the acute or chronic state of the exercise protocol and the alterations of plasma volume. Since the participants of the present study were controlled for age, gender and health status, the increase in fibrinogen concentration in the experimental group might be due to the physical exercise, increased central temperature, perspiration and hemoconcentration (10).

The results of this study showed a reduction in fibrinogen concentration after the consumption of the supplement, which is in agreement with the findings of Sesso et al. (15). Zunino et al., however, reported that strawberry powder supplementation for three weeks affected the inflammatory markers significantly in their 20 overweight subjects (4). Basu et al. reported no significant changes in serum fibrinogen concentration in their strawberry supplementation group (16). In general, the effects of strawberry supplementation and its byproducts on the reduction of fibrinogen in the present study can potentially be attributed to the increased total antioxidant activity. Strawberry can increase serum total antioxidant capacity by increasing intracellular antioxidants such as glutathione, bilirubin and uric acid and enhancing the expression of intracellular antioxidant enzymes such as superoxide dismutase, catalase, and glutathione peroxidase (17).

As discussed, this mechanism can be a reason for the significant reduction in fibrinogen concentration after strawberry supplementation in the present study. These contradictory results may be associated with participants’ age and sickness, since the sicker and older are them, the less is their antioxidant capacity. Nonetheless, since the participants of the present research were young and overweight (8, 9), its results show the need for more evidence about the anti-inflammatory effects of strawberry.

Based on the review of literature, the present study is the first clinical trial on the effect of strawberry powder obtained by freeze-drying along with endurance activity on the lipid profile of inactive overweight women.

In the present study, the participants were overweight, and since overweight and inactive people may suffer from dyslipidemia due to their disturbed metabolism, metabolic disorders are likely to affect the metabolism of lipids in these people. The reduced activity of lipoprotein lipase in such people is followed by a decline in triglyceride removal and low plasma HDL cholesterol levels. Another potential mechanism could be the high antioxidant content of strawberry, including polyphenols and vitamin C (19).

The present findings regarding physical activity and lipid markers are in agreement with the results obtained in several other studies (20-22). Weight, gender, diet and exercise protocol appear to be important factors in the reaction of HDL to exercise. The exact mechanism of effect of HDL is still unknown, but peripheral tissues and the liver have been suggested to play a role, as an increased HDL may be due to a rise in LPL activity through the hydrolysis of plasma triglyceride and lecithin cholesterol acyltransferase (LCAT) and the reduced activity of hepatic lipase and cholesteryl ester transfer protein (CETP), which is responsible for ester cholesterol transfer to HDL (23, 24).

As for LDL and total cholesterol, aerobic exercise has been shown to be associated with a decline in TC and LDL. As for TG, the results of most studies, including the one by Nash et al. (25), were in line with the present findings, and few studies had disparate results, such as those by Sung et al. (26) and Behall et al. (27). A potentially important mechanism could be the increased activity of LPL, which releases fatty acids degraded from the TG of adipose and muscle tissues, increases the catabolism of TG and lipoproteins rich in triglyceride and facilitates TG removal from the blood stream.

Overall, it can be concluded that strawberry supplementation together with endurance exercise decreases total cholesterol and triglyceride significantly and reduces LDL non-significantly in inactive overweight women. Nonetheless, serum HDL-C increased significantly in the subjects. In this study, strawberry supplementation in inactive overweight women led to a significant decrease in the serum concentration of fibrinogen, although an increase was observed after one session of endurance activity. The findings also showed that short-term supplementation with strawberry extract might prevent unfavorable changes in oxidative and inflammatory markers following aerobic exercise by promoting the serum total antioxidant capacity at baseline.

Copyright © 2019, Journal of Kermanshah University of Medical Sciences. This is an open-access article distributed under the terms of the Creative Commons Attribution-NonCommercial 4.0 International License (http://creativecommons.org/licenses/by-nc/4.0/) which permits copy and redistribute the material just in noncommercial usages, provided the original work is properly cited.
download pdf 120.41 KB Get Permission (article level) Import into EndNote Import into BibTex
Number of Comments: 0