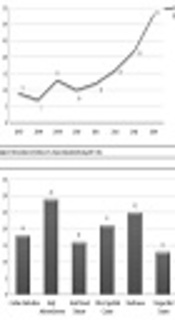 Cerebrovascular accidents are the most prevalent debilitating neurological disease and the third leading cause of death in the world. Although the incidence of stroke increases with age, its prevalence is growing in the young.

In the present study the incidence of ischemic stroke and its associated risk factors was investigated in young adults in the city of Kermanshah, Iran over a seven-year period.

The present study was conducted on 122 patients below the age of 45 years who hospitalized with ischemic stroke in the Department of Neurology of Imam Reza Hospital in Kermanshah between 2007 and 2014. Data, including age, gender, history of hypertension, smoking status, the history of heart disease, taking high-risk medications, the history of internal diseases, hyperlipidemia, diabetes mellitus and causes of stroke were recorded in the designed a checklist.

There is a considerable increase in the incidence of ischemic stroke in young people. Control of the risk factors, raising public awareness, and changing lifestyle are crucial for preventing cerebrovascular accidents and their associated complications and death.

Stroke is the most prevalent life-threatening and most important debilitating neurological disorder. According to WHO estimates, by 2020, strokes will turn into the second leading cause of death after ischemic heart disease in developed and developing countries (1). Moreover, preventing this complication as a major cause of physical and brain disabilities is crucial given the high cost of maintaining and taking care of the patients (2, 3). From a clinical perspective, stroke is caused by the disruption of the blood supply to the brain as a result of the thromboembolism-associated blockage of the main vessels or rupture of the arteries. Approximately 85% of all strokes are ischemic in origin, as they are mainly caused by the thrombotic or embolic blockage of brain arteries (4). The incidence of stroke significantly grows with age. Given the increased human longevity, this incidence has therefore become exceptionally important in different communities. Research suggests that the incidence of this complication nearly doubles with every ten years after the age of 55 (5).

Although strokes are mainly associated with middle and old ages, young adults may also be affected by cerebrovascular incidents. The annual incidence of ischemic stroke has been reported as 5% - 10% of all types of stroke in young adults (6). Clinical evidence and unofficial national statistics also suggest an increase in the incidence of strokes in young Iranian adults, which is particularly important given the potential increase in the number of lost years caused by the disease and the higher costs of maintaining, taking care and rehabilitating this group of patients. According to previously - conducted studies, age, male gender, family history, race and ethnicity are among the uncontrollable factors contributing to the incidence of strokes, and hypertension, heart diseases, diabetes mellitus, hyperlipidemia, non-sclerotic causes, smoking, excessive alcohol drinking, lack of mobility and cerebrovascular ischemic incidents, including traumas, fibromuscular dysplasia and migraine, are the controllable risk factors with the same role (7). Research also attributes different causes to strokes in adults compared to in older adults. Cervical arterial dissection and non-arrhythmic cardiac disorders are the common causes of stroke in young adults, whereas well-known risk factors are more common in older adults (8).

Despite the increasing prevalence of strokes in young adults and numerous consequences of this disorder for this age group, few studies have been conducted to determine stroke - associated risk factors in young Iranian adults. Finding the risk factors associated with cerebrovascular incidents helps to not only determine the likelihood of developing stroke, but also to predict the disease duration, the mortality and disabilities associated with these incidents and their probability of recurrence. Correcting the risk factors early can reduce the incidence and recurrence of strokes (9).

The study population comprised all 15 - 45-year-old patients diagnosed with stroke and hospitalized in Imam Reza Hospital in Kermanshah during 2007 - 2014. Stroke is defined as a focal neurological defect lasting over 24 hours, which is associated with cerebral infarction evidence. Stroke was diagnosed through examinations by a neurologist based on clinical symptoms and brain CT scan or MRI.

The stroke - associated risk factors determined according to previous studies (10) included hypertension, angina, diabetes mellitus, hyperlipidemia, smoking and a history of cardiovascular and cerebrovascular diseases. The reasons for developing stroke were also investigated. The data extracted from the patients’ were documented into checklist. The eligible candidates comprised patients with ischemic stroke, whereas the excluded ones consisted of those with hemorrhagic strokes or a history of head traumas as well as those with neurological defects that had been caused by other reasons, including metabolic diseases, or other lesions, including tumors, or had been relieved within 24 hours. All the data collected were investigated and eventually analyzed in SPSS V. 16 after being entered into the computer.

The results showed age-associated increases in both the risk of stroke and the number of ischemic stroke patients (Table 1).

Table 1. Frequency Distribution of 15 - 45-Year-Old Patients with Ischemic Stroke by Age and Gendera

According to Table 2, the most important clinical risk factors associated with ischemic stroke in the study subjects comprised a history of hypertension, heart diseases, angina and internal and rheumatic diseases, smoking, taking high-risk medications, diabetes mellitus and hyperlipidemia. Table 2 also suggests that “history of hypertension” is the most-frequent risk factor observed in 37 (30.33%) of the patients, and “history of rheumatism” the least - frequent risk factor observed in 11 (9.02%).

Table 2. Frequency Distribution of 15 - 45-Year-Old Patients with Ischemic Stroke by the Risk Factor

Frequency of causes of stroke in 15 - 45-year-old patients

According to Figure 2, the most common causes of ischemic stroke in the study patients were early atherosclerosis (23.8%) and cardiac embolism (14.07%).

According to the present results, the incidence of ischemic stroke had been growing in 15 - 45-year-old patients during 2007 - 2014, especially since 2011. Although raising public awareness, improving the process of emergency deployment and developing the Neurology Department of the study hospital can affect the number of these patients, the significant increase in the incidence of ischemic stroke in young adults, especially during 2011 - 2014, must be addressed by researchers and health policy-makers in this part of Iran.

The present study found the incidence of stroke to increase with age. The highest frequency of ischemic stroke was associated with the 35 - 45-year-old patients, and the mean age of the patients was 37.33 ± 7.05 years. The incidence of stroke increases so sharply with age that aging constitutes the most important risk factor for stroke (4, 10, 11). The present study found the prevalence of stroke to be higher in the men than in the women, which is consistent with the results obtained by Jovanovic et al. (12), Ji et al. (13) and Shahbazi and Zareiy (14). In contrast, a similar study conducted in the city of Ardabil, Iran found 71% of patients with stroke to be female (15). Racial, cultural and lifestyle differences are important factors affecting the incidence of stroke. Given that the race of people in Ardabil is Turk, and that in Kermanshah is Kurd, racial differences can explain the differences in the prevalence of stroke between women and men. Given the physiological differences between men and women, neither gender can be definitely said to be more vulnerable; nevertheless, previous studies have shown that men are generally more vulnerable to hemorrhagic stroke and women to ischemic stroke (16, 17).

The present study found the history of hypertension to be the most common risk factor (30.3%) in the study patients, which is consistent with the majority of studies conducted on the subject (10, 18, 19). A study conducted on five thousand 30 - 60-year-old asymptomatic men and women who were followed-up for 18 years found the likelihood of stroke to be seven times larger in patients with hypertension compared to in those with a normal blood pressure. Moreover, review of 45 prospective cohort studies from around the world showed a significant relationship between diastolic blood pressure and the risk of stroke, in a way that the risk of stroke increased by 80% for every 10 mmHg increase in diastolic blood pressure (20, 21). The present study found smoking with a frequency of 28.7% to be the second leading risk factor in the patients. Research suggests that smoking independently increases the risk of stroke. With cardiovascular risk factors being controlled, the relative risk of developing stroke is 1.7 times larger in smokers (22). Jovanovic et al. also found smoking, hypertension and lipid disorder to be among the risk factors associated with developing stroke, which is consistent with the present study results (12).

Hyperlipidemia is another common risk factor for ischemic stroke in young age. A study conducted in Greece on strokes in young adults found lipid disorders to be a major risk factor (23). A study by Oslen et al. on 652 patients showed that high cholesterol levels are approximately linearly correlated with the severity of strokes, and that the likelihood of strokes increases with cholesterol levels (26). Hypolipidemic medications were also found to reduce the severity of strokes (27). The present study identified hyperlipidemia in 20.5% of the patients. The majorities of studies conducted suggest that diabetes is a risk factor for strokes in young ages (5, 28). The present study also found diabetes to be the sixth major risk factor (18.8%). Ji et al. reported diabetes as a risk factor for developing strokes in young ages in 11% of the cases (13). The incidence of strokes has been reported to be 1.5 - 2 times higher in diabetics compared to in normal populations (19, 29).

According to the present results, the incidence of ischemic stroke has been growing in young adults. Numerous risk factors have been introduced for this problem, including hypertension with the highest frequency in the present study age group. Given the importance of hypertension for the incidence of different types of stroke, especially for hemorrhagic and fatal types, effective measures, including the establishment of hypertension diagnostic and treatment clinics across urban and rural communities, are recommended to be taken to identify the patients and detect and prevent the progression of hypertension, especially the asymptomatic type. Other major risk factors that are also required to be simultaneously considered include smoking, cardiovascular factors, high-risk medications and diabetes.

Copyright © 2019, Journal of Kermanshah University of Medical Sciences. This is an open-access article distributed under the terms of the Creative Commons Attribution-NonCommercial 4.0 International License (http://creativecommons.org/licenses/by-nc/4.0/) which permits copy and redistribute the material just in noncommercial usages, provided the original work is properly cited.
download pdf 168.24 KB Get Permission (article level) Import into EndNote Import into BibTex
Number of Comments: 0