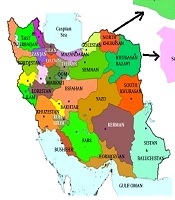 Species Identification of Cutaneous Leishmaniasis in Quchan, Northeast of Iran

Khorasan Province is an endemic region for cutaneous leishmaniasis. The species identification of Leishmania protozoa is useful for the control and prevention of leishmaniasis.

The present study is the first to identify Leishmania species by evaluating their risk factors in Quchan, Northern Khorasan, Northeast of Iran.

A questionnaire and slide smears were collected from 103 individuals suspected of having leishmaniasis. Optimized PCR was performed using specific kDNA primers on all the slides. The data obtained were analyzed in SPSS-20 software.

Among the 103 subjects with skin ulcers suspected of having CL, 77 (74.8%) showed positive results in their direct microscopic smear. Specific Leishmania PCR bands, however, were observed in 86 (83.4%), including 57 subjects with L. tropica and 29 with L. major. The most frequent age range involved was 20 - 30 years and the most common site of the lesions was the hands. From the 57 cases of L. tropica, 43.9% and 56.1% lived in urban and rural districts, respectively. The sensitivity of microscopy for the diagnosis of Leishmania spp. was calculated as 89.5% in this study.

Cutaneous Leishmaniasis (CL) is among the neglected endemic diseases of America, Africa, India, southwest Asia and the Mediterranean (1). Nowadays, 12 million people in the world suffer from this disease. The annual incidence of leishmaniasis in the world is estimated at 1 to 1.5 million. Iran is one of the ten countries in which cutaneous leishmaniasis has constantly been reported to have a high prevalence (2). About 20,000 cases of leishmaniasis are reported annually in this country, but the actual prevalence of the disease appears to be four to five times higher. The prevalence of infection has been reported as 1.8% to 37.9% in different provinces of Iran (3). Cutaneous leishmaniasis has two forms, including Anthroponotic Cutaneous Leishmaniasis (ACL), which is caused by Leishmania tropica (L. tropica), and Zoonotic Cutaneous Leishmaniasis (ZCL), which is caused by Leishmania major (L. major). L. tropica is transmitted to human beings by the bite of infected female Phlebotomus sergenti. Phlebotomus papatasi, the most prevalent species of the Phlebotomus genus, is the only known vector of L. major (4). The identification and characterization of different species of leishmaniasis is one of the main factors involved in the prevention and control of this disease. Determining the dominant strain in each region has applications in the pharmaceutical industry, vaccination and the production of antigens for disease diagnosis (5).

The present study is the first conducted to determine the epidemiological aspects of CL in Quchan, northeastern Iran, and has been carried out in 2017. This study was conducted in collaboration between Mashhad University of Medical Sciences and the health centers of Quchan in 2017. One-hundred three individuals who had at least one skin ulcer and presented to medical centers were included in this study. Scraping was performed for the direct examination of the edge of each skin lesion using a sterile scalpel after obtaining informed consent and completing a questionnaire.

After preparing direct Giemsa stained smears, all the slides were scrapped for DNA extraction (GeNet Bio, Korea). Polymerase chain reaction was performed with specific primers of kDNA pattern as F: 5’-TCGCAGAACGCCCCTACC-3’ and R: 5’-AGGGGTTGGTGTAAAATAGG-3’ (Tuba-Negin, Iran), which produced a 615-bp fragment for L. major and 744-bp fragment for L. tropica (6). PCR was performed as initial denaturation for 5 min at 95ºC, followed by 38 cycles of 94ºC for 30 s, 60ºC for 45 s and 72ºC for 60 s, ending with a final extension at 72ºC for 7 min. In each round of PCR, two standard L. major samples (strain: MRHO/IR/75/ER) and L. tropica (strain: MHOM/01/IR/YAZA) were used as a positive control and distilled water as the negative control. Data were analyzed in SPSS-20 (SPSS Inc., Chicago, IL, USA) using the chi-square test.

Out of the 103 suspected individuals, 77 (74.8%) and 86 (83.4%) patients were diagnosed with CL by microscopic examination and PCR, respectively. Figure 2 presents the PCR results. The sensitivity of the microscopic method was measured as 89.5%. No significant correlations were observed between habitat (rural and urban) and the Leishmania species (Table 1). Table 1. The Frequency Distribution of Patients with Cutaneous Leishmaniasis by Type of Living Place in Quchan in 2017

The most common lesion site was observed on the patients’ hand (Table 2). Papule was the most commonly-observed clinical feature (Table 3). There were no statistically significant differences between the type of clinical presentation and Leishmania species (P = 0.2). Also, most of the patients had one lesion (Table 4). Most lesion measurements (n = 55, 64.7%) were under ten millimeters (Table 5). There were no correlations between the size of the ulcer and the species of Leishmania (P = 0.5).

Table 6. The Relationship Between Season and Disease Incidence in Patients with Cutaneous Leishmaniasis in Quchan in 2017

To date, no research has been conducted in Quchan as an endemic focus of CL. According to the present findings, there is a predominant species of L. tropica in Quchan, a city neighboring Mashhad, Sabzevar, Bojnord, Esfarayen and Neyshabur.

L. major is responsible for leishmaniasis in Esfarayen (based on an unpublished study) and Sabzevar (7), as ZCL was reported in all the 153 patients in the latter city. Mashhad and most of the cities in Khorasan-e Razavi are an endemic region for ACL (7, 8). In Iran, ZCL is endemic in the rural regions of the west, the northeast, the center and the southwest, especially in Khuzestan Province. ACL mostly occurs in large urban areas, such as Yazd, Tehran, Shiraz, Mashhad and Kerman (9).

The most common number of ulcers in CL patients is one and usually occurs in the hands and face, which are un-woven. Among all the risk factors evaluated in the present study, including age, gender, clinical features, living place, lesion size, lesion number, engaged organ, travel history and season, only the relationship between season and leishmaniasis prevalence was statistically significant. All the studies reported a high infection rate in autumn (7). Due to the activity of sand flies in late spring and summer, the incidence of CL is highest in autumn and winter, which had the most recorded number of leishmaniasis patients in Iran (10).

The articles that reported a significant relationship between gender, age and cutaneous leishmaniasis were the same number as the articles that reported the opposite. Despite the many studies conducted in endemic areas of CL, the issue remains unclear. All age groups were affected in the different reports; that is, age ranges 21 - 30 years, 10 - 15 years and 0 - 9 years, all of which fall under the age of 40 years (11-13).

Nine false negative cases were reported by microscopic examination in this study. KDNA-PCR has a higher sensitivity than the microscopic method with a 75% - 98% rate for the detection of Leishmania species, even in the patients’ urine (14).

The boundaries of leishmaniasis incidence have changed in recent years, as new foci of L. tropica were detected in rural regions (15, 16). In this study, 56.1% of the patients with L. tropica lived in rural districts. Humans are thought to be the reservoir of L. tropica. In rural areas, it is not important to determine the contaminated rodents, but infected patients should be treated.

According to the present condition, L. tropica is responsible for cutaneous leishmaniasis in either rural or urban areas of Quchan. In rural areas, better vector/reservoir detection, training and control programs should be set in place.

The authors wish to express their gratitude to the health centers of Quchan for their help in collecting the samples.

Copyright © 2019, Journal of Kermanshah University of Medical Sciences. This is an open-access article distributed under the terms of the Creative Commons Attribution-NonCommercial 4.0 International License (http://creativecommons.org/licenses/by-nc/4.0/) which permits copy and redistribute the material just in noncommercial usages, provided the original work is properly cited.
download pdf 1.74 MB Get Permission (article level) Import into EndNote Import into BibTex
Number of Comments: 0