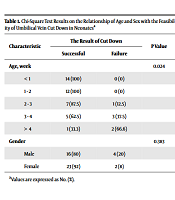 Umbilical vein cutdown in neonates as an important method of accessing vascular is very important in cases in which peripheral vein is not available and it is not possible to cut down another vein. The umbilical vein is believed to become thrombotic and lumen is closed and unusable one week postpartum.

In this cross-sectional study, all neonates who were admitted to the surgical ward of Mohammad Kermanshahi Hospital in Kermanshah, who needed emergency vein access and who were unable to have vein cutdown elsewhere during 2012 - 2014 were enrolled. The participants were divided to four age groups (one week to four weeks) and the possibility of umbilical vein cutdown was assessed in each group.

Of all participants, 25 infants were girls and 20 were boys. The umbilical vein cutdown was successful in 39 patients (86.7%), and failed in 6 patients (13.3%). The procedure was successful in all infants younger than 3 weeks old except for one case, while the success rate rapidly decreased after 3 weeks old.

Access to blood vessels, especially the central venous system, through surgical excision (cut down) is vital in emergency situations when it is not possible to access peripheral vessels in a conventional or percutaneous route in ill infants, and can save the infant’s life. Since access to central vessels may be high risk, peripheral vessels can be accessed through cutdown. That is, the skin is incised and a vein is found in the deep tissues of the body in the lower or upper limbs, the head, face and neck, and even in the chest or the abdomen. Catheterizing umbilical vein as well as peripheral and central vessels in preterm low birth weight infants and even term neonates in the intensive care units is a common practice (1). However, performing cutdown for peripheral or central vessels is both time-consuming and high risk. In some cases, cutdown is not possible in peripheral veins such as saphenous, basilic, cephalic and facial veins because they have been used before or are very small. Sometimes it is not feasible because of the high risk and major complications of using central veins such as internal jugular, subclavian or femoral veins. Therefore, the umbilical vein can be used as a substitute in infants. The umbilical vein is an accessible vein with sufficient diameter and easy access to central arteries, which make it an appropriate alternative in terms of time and risk (2). Its biggest limitation is time because umbilical vein can be closed and unusable one week after birth. Some of its rare complications are as follows: thrombus formation in the catheter, portal and hepatic vein thrombosis, injuries to other organs such as pericardial hematoma due to perforation of the right or left atrium wall or hepatic hematoma due to puncture of the hepatic artery wall and displacement, umbilical cord infection and sepsis. The only absolute contraindications to umbilical catheterization include omphalites, peritonitis and necrotizing enterocolitis. Therefore, it appears necessary to examine how long this vein is really usable, whether it is true that catheterization is possible only one week postpartum, and whether the umbilical vein can be catheterized and cannulated for much longer period.

Venous cannulation which had regularly been used in neonates since 1940 was initially performed through the umbilical vein. However, its complications led to its alternatives of peripheral and central veins. Currently, peripheral venous access is preferred (except for high-volume fluid resuscitation, infusion of stimulants, and long-term vascular nutrition). Also, central venous routes are also selected in critically ill neonates when peripheral vascular use is restricted (3).

Thin silicone catheters can be inserted through a peripheral vein and used for intravenous feeding. Broviac or Hickman catheters are implanted subcutaneously and are used when central vein cannulation is required for more than 6 weeks (4). These catheters should be carefully inserted and monitored to prevent complications. Infection is one of the most common and serious complications of access to vascular routes. Other complications of central venous infusion caused by improper insertion, are bleeding and thrombosis. Distal hypoperfusion may also occur following wrong arterial cannulation (5).

This study aims to investigate the use of the umbilical vein as a valuable way of accessing the vein during emergencies in view of this time limit. Is the umbilical vein usable or open only during the first week of birth or longer? Answer to this question can then allow surgeons to use this vein in emergencies as a valuable method for venous access.

In this non-randomized, interventional study, an intervention is performed in a group of patients and its feasibility is evaluated (feasibility of umbilical vein catheterization) in Mohammad Kermanshahi Hospital in the city of Kermanshah, Iran from 2012 to 2014.The statistical population of the study included infants who needed emergency intravenous access, but access to peripheral veins or cut down elsewhere was not possible. The study included all eligible infants in the study. Inclusion criteria were all neonates hospitalized in Mohammad Kermanshahi Hospital, with no access to a peripheral vein for emergency treatments such as fluid therapy, administering medications, transfusing blood etc., emergency consultation was performed and because peripheral access to other veins such as saphenous vein, basil and cephalic was not possible for various reasons such as previous cuts or very small vein size, they were candidate for umbilical vein cut down. Exclusion criteria included cases who were contraindicated for umbilical vein catheterization and cut down due to omphalitis, peritonitis, and NEC. University Ethics Committee approved the study on September 2nd, 2014 (code of ethics: 23309). Informed consent was obtained from the parents of these infants. All infants were subjected to an umbilical vein cut down by a pediatric surgeon and in the operating room under general anesthesia. A full-thickness skin was incised one centimeter above the umbilicus, slightly to the right, and then the abdominal fascia was incised but the peritoneum was left intact to prevent extrusion of viscera. The umbilical cord is under the fascia and above the peritoneum and an experienced individual can easily find it because of its relatively large diameter. The two umbilical arteries, located below and on the sides of the umbilicus, become fibrous immediately after birth and stretches toward lower abdomen a medial umbilical ligament. The umbilical vein is located at the 11 o’clock position and runs upward. Therefore, they are not confused with each other and are easy to differentiate. After distal and proximal ligation of the vein, the lateral surface of the vein is partially opened. After flushing normal saline through the cut down catheter, it is inserted into the umbilical vein, preferably from the anterior and upper abdomen by the injectable serum.

Umbilical vein cut down can be performed with conventional catheters which are made of plastic and with normal sizes, in addition to central venous catheters, which are hollow polymer pipes suitable for transferring fluids such as blood and urine in and out of the body. Catheters have different types for treating a variety of diseases, including cardiovascular, urological, gastrointestinal, and neurovascular disorders. Intravenous catheterization or cannulation is the method in which a cannula is inserted into a vein to provide an intravenous access. The umbilical vein catheter usually passes directly through the umbilical cord, umbilical vein, left portal vein, venous ductus, middle or left hepatic vein, and eventually into the inferior vena cava, and even passes through the atrium or ventricle of the heart.

Successful umbilical vein catheterization is ensured with aspiration and blood flow into the lumen of the catheter through injecting fluids, which indicate the catheter is open. In contrast, if blood does not return and fluid needs excessive pressure to be injected into the vein, it shows that the umbilical cord is thrombotic and the lumen is closed; hence, it is not possible to use vein cut down. In other words, as time passes after birth, the vein is gradually obliterated by clots. In fact, the umbilical vein gradually becomes a rigid ligament without lumen and cannot be used for infusing fluids. In adults, its remains are called falciform ligament. After umbilical vein cut down and catheterization, the fascial layers, subcutaneous tissue and skin are sutured and repaired. Then, the catheter is fixed and the procedure is terminated. Postoperative radiography can detect the correct placement of the catheter into the vein and its location.

In this study, variables of neonatal age, sex, neonatal weight, reason for hospitalization, and possibility of catheterization in all eligible neonates were assessed and recorded in the research questionnaire.

Data were analyzed in SPSS software version 22 and Excel software, after data collection and classification based on age, sex and weight of neonates. Mann-Whitney U and chi-square tests were used to examine the relationship of age, sex and weight with cutdown.

In this study, we enrolled 45 ill neonates in need of resuscitation admitted to Mohammad Kermanshahi Hospital, whose peripheral veins were not accessible or fit for cut down and were candidate for umbilical vein cut down. The mean age of neonates was 2 - 120 days with a mean and standard deviation of 22.61 ± 22.61 days. Twenty (44.4%) of the infants were male and 25 (55.6%) were female. Neonatal weight was 1 - 6 kg with a mean and standard deviation of 2.74 ± 1.28 kg.

The results of chi-square test revealed a significant relationship between neonatal age and the feasibility of umbilical vein cut down (P < 0.05). The outcome of cut down was successful in infants of younger than 3 weeks (26 cases, 66.7%) (Table 1).

Table 1. Chi-Square Test Results on the Relationship of Age and Sex with the Feasibility of Umbilical Vein Cut Down in Neonatesa

Also, the results of chi-square test revealed no significant relationship between the sex of neonates and the feasibility of umbilical vein cut down (P > 0.05) (Table 1).

Also, the results of Mann-Whitney U-test on the relationship between neonatal weight and feasibilty of umbilical vein cut down revealed no significant relationship (P > 0.05) (Table 2).

Table 2. Mann-Whitney Test Results on the Relationship Between the Weight of Neonates and the Feasibility of Umbilical Vein Cut Downa

Given that using umbilical vein is inevitable in some cases and the only effective way to access vein in some infants, it appears that umbilical vein cut down can be effective and ultimately successful within 3 weeks of age. More studies, especially controlled randomized studies, are required for definitive conclusions in this regard.

Copyright © 2019, Journal of Kermanshah University of Medical Sciences. This is an open-access article distributed under the terms of the Creative Commons Attribution-NonCommercial 4.0 International License (http://creativecommons.org/licenses/by-nc/4.0/) which permits copy and redistribute the material just in noncommercial usages, provided the original work is properly cited.
download pdf 112.36 KB Get Permission (article level) Import into EndNote Import into BibTex
Number of Comments: 0