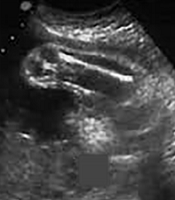 Determining the exact gestational age can prevent many complications and unpleasant consequences of pregnancy such as fetal growth retardation, premature birth and prenatal mortality.

This study aimed to measure fetal anterior-posterior thigh diameter, as a new method for determining gestational age, and to compare it with routine ultrasound parameters (biparietal diameter, femur length).

In this study, 105 pregnant women with gestational age 18 - 28 weeks who presented to Kermanshah Imam Reza Hospital were recruited. Gestational age was determined based on last menstrual period (LMP). Then, ultrasound was performed to measure gestational age with anterior-posterior thigh diameter and other routine parameters (biparietal diameter, femur length). Finally, the results were evaluated with KS and Spearman’s correlation coefficient in SPSS version 22. Significance level was set as 0.05.

A significant correlation existed between estimation of gestational age based on ultrasound parameters and LMP, and between anterior-posterior thigh diameter and routine ultrasound parameters (P < 0.05). Hence, anterior-posterior thigh diameter is as good as biparietal diameter and femur length for estimation of gestational age.

According to the results, using anterior-posterior thigh diameter can be a reliable method in estimation of gestational age in the second trimester in addition to routine parameters.

Ultrasound is currently used to determine gestational age by measuring different values such as gestational sac diameter, fetal crown-rump length (CRL), fetal biparietal diameter (BPD), femoral length (FL), abdominal circumference (AC), length of other fetal long bones such as the arm, fetal transverse cerebellar diameter (TCD) and fetal foot length (1-3). The exact estimation of gestational age depends on the correct measurement of the above diameters (2, 3). Also, variations in fetal measurement results by different individuals will increase with gestational age, and earlier measurements determine gestational age more accurately (2, 3). Many studies have been conducted in this field in different countries, and various measurements and tables have been developed to determine fetal age based on measuring different diameters (4, 5). Textbooks emphasize that fetal growth is influenced by genetic factors, which in turn are affected by ethnic and geographic differences, and this is more significant in the third trimester (3, 6).

Since no study in Iran and only one study in the world (9) has investigated the gestational age determination through measurement of anterior-posterior thigh diameters (APTD), this study aimed to determine gestational age by measuring APTD and investigate the relationship between this parameter and other routine ultrasound parameters in determining gestational age.

In this cross-sectional correlation analysis, 105 pregnant mothers with a gestational age of 18 to 28 weeks presenting to Imam Reza Hospital in Kermanshah, Iran for performing an ultrasound were selected through convenience sampling if they were willing to participate in the study. The inclusion criteria were having regular menstrual cycles and knowing the exact date of the first day of the last menstrual period (LMP); not having diabetes, hypertension, or a history of medication use; singleton pregnancy, no fetal anomaly, and no history of intrauterine growth retardation. Gestational age was determined using the first day of the last menstrual period by the project assistant. The project executor who was blinded to subjects’ LMP determined gestational age by measuring APTD at the widest part of the thigh from anterior to posterior skin along with routine ultrasound parameters (BPD and FL) using a Siemens G40 ultrasound device and Canucks 5 - 5.3 MHz probe. In estimating gestational age based on APTD, each millimeter of APTD size was considered as one week of gestation (Figure 1). Collected data were analyzed using SPSS-22 software. The KS test was used to determine the normality of measurements. Spearman correlation coefficient was then used for correlation analysis based on KS test. The significance level of the tests was considered 0.05.

Table 2. Correlation Coefficient and Determination of the Relationship Between Gestational Age Estimation Based on Routine Ultrasound Parameters and LMP

Table 3 . Correlation Coefficient and Determination of the Relationship Between Gestational Age Estimation Based on BPD and FL Routine Ultrasound Parameters and APTD

One of the limitations of gestational age determination with APTD measurement is that it is less accurate in the third trimester of pregnancy due to increased fetal size and position of fetal lower limbs (which are bent) as well as a decrease in amniotic fluid volume, which is why current studies are performed in the second trimester.

According to the results of this study, APTD appears to have a significant direct relationship with other routine parameters such as BPD and FL in estimating gestational age in normal pregnancies. Therefore, APTD is reliable and can be used along with other routine ultrasound parameters.

Colleagues are recommended to conduct a similar study with a larger sample size.

This paper was extracted from a registered thesis (93235) by Mohammadreza Asrari. Authors sincerely thank Imam Reza Clinical Research Development Unit in Kermanshah for their support.

Copyright © 2019, Journal of Kermanshah University of Medical Sciences. This is an open-access article distributed under the terms of the Creative Commons Attribution-NonCommercial 4.0 International License (http://creativecommons.org/licenses/by-nc/4.0/) which permits copy and redistribute the material just in noncommercial usages, provided the original work is properly cited.
download pdf 1.11 MB Get Permission (article level) Import into EndNote Import into BibTex
Number of Comments: 0