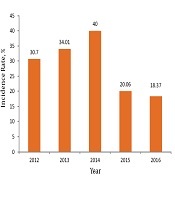 Brucellosis is a major problem in many parts of the world, including Iran, where livestock are an important source of income and employment.

This cross-sectional (descriptive-correlational) study enrolled individuals diagnosed with brucellosis from 2012 to 2016 and their information was available in the health center of Kermanshah province. Data were analyzed in SPSS software (version 21).

From all the patients with brucellosis (2714), 55.3% were male and 44.7% were female. Most of them were living in Kermanshah province, their mean age was 35.05 ± 17.35 years and the most common age group was 21 - 30 years. The most common route of transmission was consumption of contaminated dairy products (99.1%) and contact with livestock (99.71%). Musculoskeletal and back pain were the most commonly observed clinical signs (89.8%). There was a statistically significant difference between years of incidence and livestock vaccination history (P < 0.001). The highest number of patients wright test was in titer 1:160 (33.1%) and 2 ME test 1:80 (36.8%). Regarding the use of medication for treatment, most patients were prescribed combination of rifampin and co-trimoxazole (12.97%).

Timely diagnosis, livestock vaccination, training and refraining from unpasteurized dairy products can be effective in preventing outbreaks of brucellosis.

Brucellosis is the most common zoonotic disease in developing countries transmitted through direct or indirect exposure to infected livestock (1). Although food hygiene has improved, brucellosis continues to exist in many parts of the world, especially in developing countries (2, 3). The disease is endemic in the Middle East (including Iran), India, Mexico, South and Central America (4). Brucellosis is found in all provinces of Iran, but recently, the highest incidence rate was reported in Azarbaijan, Hamedan, Lorestan, Markazi and Kermanshah provinces (5).

In industrialized countries, brucellosis is the most common occupational disease among middle-aged men exposed to livestock or men using unpasteurized animal products (6). Due to the widespread clinical manifestations of brucellosis, the diagnosis is based on clinical findings, epidemiological features, and serum tests (1). According to data from the Ministry of Health between 2010 and 2014, about 12248 and 20117 cases of brucellosis were reported, which indicates an increase of 70% (7). The reason for the increased incidence was the lack of funding for vaccine production at Razi Institute and purchase of the vaccine from abroad. Once necessary funds were allocated for vaccine production, vaccine import, vaccination was resumed for brucellosis in 2015, and human brucellosis incidence decreased in 2016 (8).

Brucellosis is a common zoonotic disease with severe consequences for humans. The disease has a wide range of clinical sings and can lead to severe complications in musculoskeletal, digestive, genital, blood, cardiovascular, respiratory and central nervous systems. Control of brucellosis in humans depends on reducing the rate of infection in livestock and eradicating the infection in infected livestock through general animal vaccination and care (9-11).

Brucellosis is a major problem in several parts of the world and in some regions of Iran, including Kermanshah province, where livestock is a source of employment and income for many people (12, 13).

Investigating and controlling brucellosis in a region or country require improvement of policies and decisions, also access to accurate epidemiological and clinical information (14).

Based on studies, diagnosis may be delayed due to the lack of a clinically relevant factor in patient’s condition. This may sometimes cause a delay in diagnosis by the physician. In this situation, it is better to use laboratory diagnostic methods to confirm the disease (15).

Lack of knowledge about brucellosis is one of the main factors in controlling the disease, especially among rural and nomadic populations of Kermanshah and Iran. Farmers who do not have enough information about the disease are most affected by pathogens and the number of patients in rural areas is significantly higher than that of in urban areas (16).

Lack of personal protective gear and unprotected contact with animals as well as use of unpasteurized dairy products are the most important causes of the incidence of this disease in Iran, including in Kermanshah province (17). This study was conducted due to the increasing incidence of brucellosis, especially among people who are in contact with livestock and consume unpasteurized dairy products as well as residents of rural areas of Kermanshah province.

The aim of this study was to evaluate the epidemiology and clinical status of patients with brucellosis recorded in Kermanshah Health Center.

Due to the increased incidence and also clinical complications of brucellosis in recent years, this study was performed to evaluate the epidemiology and clinical analysis of brucellosis in a 5-year period from 2012 to 2016. This study is based on a questionnaire containing demographic information (age at diagnosis, gender, occupation, ...), epidemiologic, clinical and paraclinical features including history of contact with livestock, history of suspicious dairy consumption, family history of disease, and history of livestock vaccination, diagnostic measures (time of onset and presentation of clinical symptoms, type of symptoms, time of diagnosis). We evaluated the results of patients’ diagnostic tests according to different criteria from their records.

In this study, all patients with brucellosis whose data were recorded over a five-year period at Kermanshah Health Center were enrolled. The data included clinical signs and laboratory results (Wright test at least 1:80, and ME 2 at least 1:40) indicating brucellosis according to ‘national guidelines for brucellosis’. Demographic information (age at diagnosis, gender, occupation, ...), epidemiologic, clinical and paraclinical characteristics including exposure to livestock, history of suspicious dairy consumption, family history of diseases, and history of livestock vaccination, diagnostic measures (time of onset and presentation of clinical symptoms, type of symptoms, time of diagnosis), and the results of the diagnostic tests of the patients were evaluated according to different titer and kind of medications used after the diagnosis within the specific period of time.

All ethical principles including avoidance of potential harm to participants, confidentiality of information obtained at the beginning or during the study, the three principles of respect for the individual, beneficence and justice, as well as ethics in writing and publication of the findings were observed.

Table 1. Residence of Patients with Brucellosis in Kermanshah Province (2012 - 2016)

There was a statistically significant difference between years of incidence and livestock vaccination history (P < 0.001).

The highest incidence rate of brucellosis was observed in Dalahoo as 59.18% (Table 4).

The incidence and prevalence rates of brucellosis in Kermanshah province increased from 2012 to 2014, and declined since the implementation of the SHEEP project in subsequent years (2015 and 2016) (Table 5, Figure 1). Countries with the highest incidence of human brucellosis in the Middle East include Saudi Arabia, Iran, Palestine, Syria, Jordan and Oman (21). Of the 2714 patients studied, 55.3% were male, which is similar to most studies in the country (22, 23) as well as other countries (Turkey (24), Saudi (25)). Contrary to the present study, in some studies conducted in Iran and in other countries, more than half of those infected are women (10, 13, 26). The mean age of the patients was 35.05 ± 17.35 years, similar to most national and international studies (13, 23, 27) (unlike one national study and one international study with a higher mean (8, 10) and some other studies in and out of the country with a lower mean (9, 24, 25). Brucellosis was more prevalent between the ages of 31 and 40 years. In one study conducted in Iran, the most reported cases were in the age group of 15 to 44 years (28), 15 to 20 years in another (29), 10 to 19 years in another (30), and 40 to 49 in another one (31). We observed brucellosis, similar to other studies, more prevalent among housewives, ranchers, and farmers (22, 29). Furthermore, it was more common in summer in Kermanshah province (32.20%) than in other seasons. Although it is prevalent in all seasons, it is more common in spring and summer, the season of breeding and lactation. Similar results have been noted in most articles in and out of the country. One study out of Iran showed the disease was most prevalent in summer, autumn, and winter (7, 13, 23, 29, 31-33).

According to two reports from other countries, climate may have affect breeding and lactation. Climate changes due to the environmental and global warming, have had many effects on mammal’s health, production and reproduction, which has the consequences as slow growth, reduced reproduction, increased potential risk for disease, and ultimately delayed onset of lactation (34, 35).

The most common route of transmission is consumption of suspicious dairy products and simultaneously contact with livestock, which is in agreement with most studies in and out of the country (13, 17, 23, 36-38). In terms of clinical signs, most studies in and out of the country have reported similar findings including fever, anorexia, weight loss, low back pain, and musculoskeletal pain (13, 25, 39). Some studies in and out of the country have also found other signs such as anemia and night sweats, headaches, hepatomegaly and splenomegaly (12, 39). In the present study, the majority of patients (33%) had a titer of 1/160 in Wright test, and 1/80 in 2ME test. In studies out of Iran, Wright test was positive in 33 cases (41%). In a study in Fars province in Iran, 2ME test was positive in 30 cases (5.5%) (10, 26). In the present study, the majority of patients were from rural and nomadic areas. Findings from other studies in many cases confirm this result, however, one study in Iran reported the majority of patients live in the city (23, 26). The family history of patients in this study was 18.5% (34), which is almost in agreement with some other studies with 15% and 13%, and also consistent with another study (31) with 20%. Meanwhile, it was more in other studies even more than 40%. These indicate infection transmission through animals rather than human-to-human transmission (38). However, in a study in Turkey, genetics have been evaluated as an environmental factor in potential risk for brucellosis in children (12, 33, 36, 40). Studies show that delayed diagnosis may be an important clinical feature affecting patients with brucellosis, which indicates that both patients and physicians may have a significant delay in diagnosis. It has been suggested that diagnostic procedures need to be improved prior to the onset of symptoms. Also, physicians should be aware of the source of the infection and disease because it is difficult to diagnose during mild stages. Despite difficult diagnosis, screening for at-risk people and pregnant women can be helpful in detecting the disease (34, 41). Lack of awareness about the disease is one of the main reasons for failure to control the disease, particularly among the children and teenagers of nomads and rural areas, who are more likely to be exposed to livestock and brucellosis. They still do not have sufficient basic information about the disease. Various studies in the country indicate that the general public has little information about the disease (12, 42).

Due to the prevalence of the disease in the rural areas of Kermanshah province, timely and early detection of the disease is necessary for residents in these areas. In addition to vaccinating livestock, it can also be helpful to educate the community about the impact of contaminated livestock, refraining from unpasteurized dairy products, and production and consumption of healthy dairy products.

We would like to appreciate the experts in Deputy of Health Department of Kermanshah University of Medical Sciences for their assistance in collecting the data. This study was derived from an MPH thesis and was not funded by any organization.