The Prevalence of Vitamin D Deficiency Among One to Six Year Old Children of Tehran, Iran 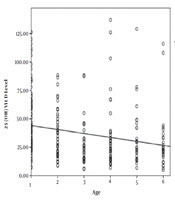 Vitamin D has an essential role in bone growth and metabolism. Currently, its role has been investigated in different diseases. It is high prevalence of vitamin D deficiency in the world, particularly in developing countries.

The aim of this study is to investigate the prevalence of vitamin D deficiency in children of 1 - 6 years old and its relation with their age, sex and body mass index.

This study was conducted in pediatric clinic of Javaheri Hospital in Tehran, from 2016 to 2017. The study population was children of 1 - 6 years old presenting to the pediatric clinic for routine examination or treatment. The collected data included age, gender, height, weight, and serum 25-hydroxy vitamin D level.

The prevalence of vitamin D deficiency is increasing with increasing age. Therefore, adoption of preventive and therapeutic measures is necessary to reduce its prevalence and side effects.

In recent years, vitamin D (calciferol) has attracted a lot of attention in field of children’s healthcare. The presence of vitamin D receptors on various cells has extended its effects in the body. Vitamin D can play an important role in bone mineralization by increasing absorption of calcium from the small intestine, balancing the function of osteoblasts and osteoclasts and increasing kidney reabsorption of calcium. It is also involved in reducing inflammatory cytokines and increasing anti-infective molecules (1-6).

Sunlight is known as a major source of vitamin D by providing nearly 90% of vitamin D in human body. It can supply our body’s required vitamin D by exposing daily to sunlight with uncovered skin of face, arms, back and legs for at least 5 to 30 minutes between 10 am and 3 pm. Currently, food sources and vitamin D supplements are very important for us due to lifestyle changes, air pollution and decreases in duration of sunlight exposure (2, 7-11).

The main problem with vitamin D deficiency is its obscure and nonspecific symptoms which fails early diagnosis. Children presenting with delays in walking and teeth growing, irritability, seizure and frequent infections are common. These problems can lead to bone diseases such as rickets, autoimmune diseases such as multiple sclerosis, chronic urticaria, cardiovascular and respiratory diseases such as cardiomyopathies and asthma and also mental disorders such as schizophrenia, depression, autism and sleep disorders (1, 2, 7-9, 12-16).

Since Iran has adopted the policy to prevent vitamin D deficiency in children under one year old by administering vitamin A + D drop and that vitamin D requirement increases with growth and ossification, it appears children older than one year need to be addressed (2, 21).

The purpose of this study is to evaluate the level of vitamin D among children of 1 - 6 years old in Tehran from 2016 to 2017 and to investigate the relation between prevalence of vitamin D deficiency and variables of age, sex and body mass index (BMI).

This cross-sectional analytical study was conducted among children of 1 - 6 years old presenting to pediatric clinic of Javaheri Hospital affiliated to Islamic Azad University of Medical Sciences in Tehran, Iran from 2016 to 2017.

The implementation protocol was approved by the ethics committee of Islamic Azad University of Medical Sciences (ethics code: IR.IAU.TMU.REC.1395.87). The participants entered the study after obtaining informed consent from their parents. Data and information obtained were considered confidential and used without mentioning children’s name.

All children between one and six years old presenting to the clinic for routine examination or treatment and without having any past medical history of liver or renal diseases, malabsorption and cancer or using any medicine affecting vitamin D metabolism like anticonvulsants entered the study.

Different studies have reported different values for the prevalence of vitamin D deficiency across the globe. Based on the study of Motlaghzadeh et al. (23), the prevalence of vitamin D deficiency was considered 81.1% in this study. The sample size was determined using a 95% confidence interval (Z = 1.96 for 95% confidence interval) and margins of error of 5% (d = 0.05). The calculated sample size was a minimum of 235 whereas 288 children were selected by convenience sampling method.

BMI was calculated by the standard method of division of weight on squared height in kg/m2, and rounded to the nearest 0.01 kg/m2. BMI Z-score was calculated using the international growth standard distribution charts of the World Health Organization (WHO) (www.who.int/childgrowth/standard). BMI over 97th%ile was classified as obese, between 85th to 97th%ile as overweight, between 15th to 85th%ile as normal, between 3rd to 15th as thin and below 3rd%ile as severely thin.

A venous blood sample (5 - 10 mL) was taken from all children at laboratory of Javaheri Hospital. All samples were centrifuged, and serum and plasma were separated and stored at -20ºC until analysis. Afterward, 25(OH) vitamin D levels were measured using radioimmunoassay (RIA) method by same ELISA kit used for all samples.

The conventional number for vitamin D levels was specified based on the level determined by WHO in 2015 as follow:

bP value, refers to the comparison of each variable between sexes.

There was no significant relation between their BMI and vitamin D deficiency (P value = 0.74) (Table 4).

Table 4. Mean Levels of BMI Among Two Groups of Normal and Deficient in Vitamin D

Only the children’s age had a significant relation with serum vitamin D level (P value = 0.00) and by linear regression analysis with B = -3.47 this relation had a descending order which means with every one year of age increase, serum level of 25(OH) vitamin D reduces by 3.47 ng/mL (Figure 1). Figure 1. Linear regression analysis of the relation between age and vitamin D level

Studies of Saki et al. (1) in southern Iran and Rajebi et al. (7) on vitamin D deficiency among female nurses of children’s medical center hospital claimed that the prevalence of vitamin D deficiency was increasing due to modern lifestyle like a decrease in tendency toward outdoor physical activities and a reduction in parental control on children’s diet in higher ages.

On the other hand, some studies showed higher prevalence rates for vitamin D deficiency in children compared with the present study; however, they have overlooked the effective health factor of the major organs in vitamin D production cycle. Sobouti et al. (24) studied 118 children with a mean age of 4.04 years old with different degrees of burns in Tehran for two years. The prevalence of vitamin D deficiency (level lower than 30 ng/mL) was reported 96.61%.

In a study in North Khorasan Province among 361 children of 7 - 18 years old, the prevalence of vitamin D insufficiency was 41.3%. Lower prevalence rates of deficiency could be attributed to lower pollution of the study region compared with Tehran (25).

Differences in the results of different studies can be attributed to differences in the studied age range, seasons and geographical regions with different levels of humidity, different methods of measurement (RIA ʋ HPLC) of serum level of 25(OH) vitamin D, different cut-off points for vitamin D deficiency and some diseases. However, all studies showed a critical need for more research and planning at national level to eliminate the high prevalence of vitamin D deficiency (8, 19, 26-29).

Hovsepian et al. (32) studied 1111 individuals of 20 - 80 years old from Isfahan, and reported the prevalence of vitamin D deficiency 70.4%, which indicated that the prevalence rate was significantly higher in young women (32).

Some studies have shown that prevalence of vitamin D deficiency increases with an increasing release of leptin from the body fat in people with higher weight and with controlling of vitamin D from kidneys and the relation between obesity and the reduction of sunlight exposure and physical activities (1, 33).

The present study was conducted in Tehran with a high genetic diversity and a high migrant population. Future research should focus on indigenous habitant with less genetic diversity to provide a more accurate estimate of vitamin D deficiency prevalence. Furthermore, studying different provinces will give us its prevalence in the country. To reduce the effect of body cover in girls and duration of sunlight exposure on the results, it is better to investigate a given season. To emphasize the importance of the prevalence of vitamin D deficiency and its impact on physical and mental health of children, some studies claimed the significant relation between the prevalence of vitamin D deficiency and cancers, infections, autoimmune diseases, and mental problems. Considering the urban lifestyle and absence of sufficient sunlight exposure, it is necessary to maintain the serum level of vitamin D in normal range (higher than 30 ng/mL) through taking at least 800 - 1000 UI supplements or through enriched processed foods on a daily basis. Currently, physicians and media emphasize the importance of vitamin D deficiency in the country in an attempt to raise the level of parental awareness. Therefore, it is recommended that some studies be conducted on the exact amount of enriched food consumption in Iran, the degree of body’s response to these nutrients through public invitation. Screening healthy children for estimating the amount of required vitamin D through medication in addition to sufficient consumption of the nutrients. Finally, countrywide planning for dairy and juice enrichment, and consuming biscuits containing 50000 IU cholecalciferol could also have significant impacts on increasing vitamin D level especially in children (12, 36-41). A study conducted by Mostafai et al. (42) revealed that daily consumption of yogurt fortified with 1000 IU vitamin D for three months could significantly increase serum level of 25(OH) vitamin D by 12.6 ng/dL.

It is also important to reduce the selection bias in the study population, as most of participants had come to the hospital for treatment, by selecting the study population from different centers related to healthy children such as schools and kindergartens.

This study was performed in Javaheri Hospital affiliated to Islamic Azad University of Medical Sciences, Tehran. All lab tests were financially supported by children’s parents themselves. We are grateful to the laboratory department of Javaheri Hospital for performing all the lab tests. We also thank the children and their parents for participating in the study and Dr. Faramarz Alinia for his contribution in writing and proofreading the manuscript.