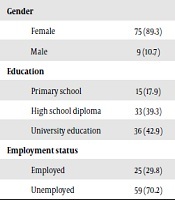 Restless Legs Syndrome (RLS) is a type of sensory-motor disorder characterized by pain, discomfort, numbness and tingling. This study was conducted to compare the prevalence of RLS in Multiple Sclerosis (MS) patients and healthy controls. Eighty-four patients with MS were selected as the case group and 84 healthy volunteers with no underlying diseases as the controls. The data collection tools included a demographic questionnaire, a scale about the disease details and a diagnostic questionnaire for RLS. A total of 45.8% of the MS patients and 22.9% of the healthy subjects had restless legs syndrome and a significant difference was observed between the two groups in this regard. In the study of RLS among MS patients, age correlated significantly with the incidence of this syndrome, and although the difference in the duration of disease was not significant, the mean duration of MS was higher in the patients with RLS. Among the MS patients with RLS, 26.31% had a family history of RLS. Also, the MS patients suffered from RLS approximately three times more than the healthy group.

Restless Legs Syndrome (RLS) is a type of sensory-motor disorder characterized by pain, discomfort, numbness and tingling that initiates or intensifies during rest, especially when sitting and lying down, and is improved by movement and activity (1). RLS is one of the most prevalent diseases in patients with Multiple Sclerosis (MS) and the chance of developing RLS and presenting its symptoms is 2.7 and 4 times higher in these patients than healthy subjects (2). The International RLS Study Group has presented four criteria for identifying this syndrome, including strong desire to move the legs, relief of symptoms by moving the legs, the initiation or exacerbation of symptoms with periods of inactivity and sitting down, and the initiation or exacerbation of symptoms at night (3).

RLS exists in two forms, namely primary and secondary forms. In the idiopathic or primary form, the first symptoms usually appear before the age of 50, and 40% to 90% of patients have a positive family history, which strongly suggests a genetic effect. In the secondary form, symptoms develop later and are triggered by risk factors (4). RLS-related risk factors include increased age, obesity, hypertension, obstructive sleep apnea syndrome, smoking more than 20 cigarettes a day, heart disease, iron deficiency, uremia, pregnancy, musculoskeletal disorders, endocrine and metabolic disorders such as diabetes mellitus and hypothyroidism, and medication use (5).

Previous studies (6, 7) have reported a higher prevalence for RLS in patients with MS than in the general public. The prevalence of RLS in the general public has been reported as 3% to 15% (8, 9). Meanwhile, in MS patients, the incidence of RLS has been reported as 27% to 65% according to different articles (10, 11). MS is still not considered a secondary cause for RLS (12) and the relationship between RLS and MS is unknown.

The aim of this study was to compare the incidence of RLS in MS patients and healthy subjects and examine its related factors.

This case-control study was conducted at Kermanshah University of Medical Sciences from October 2016 to February 2017. The first group consisted of patients with MS presenting to Imam Reza Hospital Clinic who were diagnosed with this disease by a neurologist based on their clinical findings and images. The subjects in the second group were selected from healthy volunteers without any underlying diseases in Kermanshah. The inclusion criteria consisted of willingness to cooperate, based on which 219 people entered the study, including 96 patients with MS and 123 healthy volunteers.

The exclusion criteria consisted of any underlying diseases associated with RLS, such as diabetes, hypothyroidism, iron deficiency anemia, kidney disease, rheumatoid arthritis, psychologic disorders, pregnancy, underlying neurological diseases other than MS or a recent history of using antidepressant, antipsychotic, anti-seizure and sedative drugs and opium, alcohol, dopaminergic or antidopaminergic drugs or the administration of high doses of steroids four weeks before the interview. After assessing the subjects’ eligibility based on the exclusion criteria, 86 MS patients and 110 healthy volunteers remained to be studied. For each patient in the first group, one person was matched in the second group with respect to age and gender, and eventually 84 patients with MS and 84 healthy volunteers remained to be studied.

The items used for the diagnosis of RLS were asked from both groups in the form of an interview questionnaire. An RLS diagnosis was suspected if they met the defined criteria. If the patient had all four symptoms, they were considered a case of RLS. Then, the demographic questionnaire and the IRLS Rating Scale developed by the International Restless Legs Syndrome Study Group (IRLSSG) were administered to collect the data (3). Data about MS-related variables, such as duration of disease, age at onset of symptoms and pattern of MS, were collected based on the patients’ information and the neurologist's opinion. MS was also assessed for each patient using the Expanded Disability Status Scale (EDSS); (13). This scale determines the severity of disability based on the clinical examination of the patient’s central nervous system. Family history of RLS was also recorded for the patients based on their self-reports.

After the diagnosis of RLS, the frequency of this syndrome was compared in the four groups of participants (MS/RLS+, MS/RLS-, healthy RLS-, and healthy RLS+). Data were analyzed in SPSS-20 using the chi-square test, Fisher’s test, t-test and relative risk analysis with 95% confidence interval.

Regarding the duration of MS, although the difference between the two groups (MS/RLS + and MS/RLS-) was not significant, the mean duration of MS was higher in the patients with RLS. In a study by Moreira et al. in 2007 in Brazil, there was no difference between the two groups in terms of the duration of MS, which is consistent with the results of the present study (18). In addition, in the study by Liu et al. (19) in 2014 in China, the mean age of MS patients with RLS+ was higher than the RLS- group, which is in line with the results of the present study, and concerning the disease duration, this study also reported a longer duration of MS in the RLS+ patients.

According to Table 2, in the MS/RLS+ group, 52.6% had daytime dysfunction, which is significantly higher than the rate observed in the healthy RLS+ group (26.66%). This finding is in line with the results reported by Manconi et al. (15) and Moreira et al. (18), who revealed that patients with RLS + had higher disability, poorer quality of sleep and higher levels of fatigue. It is also consistent with the results of some other studies (7, 19), which reported the severity of RLS to be higher in MS patients than in healthy subjects. Meanwhile, in Shaygannejad et al.’s study (14), the severity of RLS was expressed to be higher in the control group. MS itself causes fatigue, which may partly explain the functional disorder in patients with underlying diseases.

One of the limitations of this study was the non-assessment of sleep disorder, which is one of the complications of RLS whose assessment could lead to more accurate results. Consequently, no inferences can be made based on the findings of this study regarding sleep disorder and its complications in the study subjects. We recommend the assessment of the symptoms of RLS in MS patients as part of their routine examination and evaluation.

Copyright © 2019, Journal of Kermanshah University of Medical Sciences. This is an open-access article distributed under the terms of the Creative Commons Attribution-NonCommercial 4.0 International License (http://creativecommons.org/licenses/by-nc/4.0/) which permits copy and redistribute the material just in noncommercial usages, provided the original work is properly cited.
download pdf 97.31 KB Get Permission (article level) Import into EndNote Import into BibTex
Number of Comments: 0