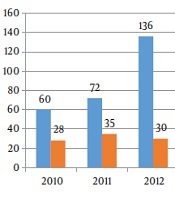 Medical malpractice is a major cause of patient complaints and dissatisfaction, which is an alarming event for healthcare professional and medical practitioners.

Despite the significant advancement in medical affairs, the rate of patient complaints and medical malpractices has increased noticeably.

The protection of patient safety is one of the most important duties of physicians (1). Medical practitioners must perform all diagnostic procedures, including full biographies or accurate physical examinations, using clinical and paraclinical tests, and consulting with the other colleagues in visiting patients if needed. Furthermore, they should initiate treatment after accurate diagnosis. Physicians may commit medical malpractice if they fail to follow diagnostic and treatment steps (e.g., accurate examination, timely diagnosis, correct treatment and surgery, follow-up, consultation, and necessary guidance) in accordance with the medical scientific and technical standards (2), which could lead to severe health consequences in patients.

Medical malpractice is of various types, such as imprudence, carelessness, lack of skills, and lack of respect to the governmental system. Imprudence is considered to be the most common medical malpractice, which is defined as the abandonment of action due to negligence, delinquency, and absent-mindedness (3). In fact, imprudence occurs when the physician takes an action that should not be taken (4).

Carelessness refers to the cases where the physician does not pay proper attention to the treatment and makes mistake, which in turn leads to physical and psychological damages in the patient. Occasionally, the lack of necessary skills may prevent physicians from showing a specific ability due to inexperience or the lack of the necessary medical knowledge. For instance, some surgeons may fail to repair artery rupture, which is likely to occur during surgeries.

Lack of respect to the governmental system is another classification of medical malpractice. The governmental system encompasses specific regulations regarding medical professionals and the associated disciplines. These rules and regulations are set by the Medical Council in accordance with the instructions of the Ministry of Health and Medical Education, circulars of educational therapy centers, and other laws, regulations, circulars, and instructions legislated by legislators or qualified medical authorities (5).

The basis of the medical malpractice claim is the occurrence of injuries in patients due to negligent actions or omission. Negligence might result from the errors in diagnosis, treatment, aftercare, and health management. If the patient proves the negligence, the physician must compensate financially (6).

If patients are not warned about treatment conditions prior to therapeutic practices, they will eventually complain of their unfulfilled expectations and demands. Complaints regarding physicians are among the most challenging issues in the medical profession; such stressful conditions could lead to distrust in the medical community, wasting of the time and energy of physicians and judicial authorities, and high costs imposed on the individuals and organizations. Overall, they pose significant risks on the healthcare system (7, 8).

According to the literature, the rate of patient complaints has been on the rise across the world despite the significant advancement of medical practices and use of modern facilities in medical centers (9, 10). According to the statistics in the United States, the rate of patient complaints has increased recently (11, 12). The results of a study in this regard showed that per 25 hospitalized cases, one patient may be injured due to medical malpractice. Each year, 48,000 - 98,000 hospitalized patients die due to medical errors (11). The increased rate of patient complaints has diverse causes, some of which include the increased knowledge and awareness of patients regarding their health conditions and individual rights, their unrealistic expectations of the treatment outcomes, use of more sophisticated diagnostic and therapeutic devices, increased number of physicians, population growth and frequent visits to physicians, insufficient knowledge of physicians regarding the legal issues, improper relations between physicians and patients, and failure to observe medical ethics (2, 13, 14).

Unfortunately, patient complaints against physicians have been on the rise in Iran. According to the statistics of the Legal Medicine Organization, complaints about medical malpractices have increased significantly in recent years (15).

The investigation of medical malpractice cases could provide valuable data regarding the number of complaints, high-risk groups for complaints, and management of such claims by the relevant authorities. In addition, the assessment of the rate of medical errors at hospitals and therapy centers demonstrates the strengths and weaknesses of physicians. As such, medical staff (especially physicians) could avoid medical malpractices by recognizing the most common complaint cases and medical malpractices and paying more attention to these cases. Furthermore, this is an effective step toward maintaining the occupational safety of physicians and health of patients by planning to reduce patient complaints. Finding a solution to this problem not only reduces the costs at the public sector and hospitals, but it also strengthens the relations between physicians and patients, which plays a pivotal role in improving the performance and efficiency of physicians.

The present study aimed to investigate the frequency of the medical complaints reported in Kerman Medical Council and Kerman Legal Medicine Organization and the confirmed cases of medical malpractice in Kerman province, Iran.

This cross-sectional, retrospective study was conducted to investigate the complaint cases reported in Kerman Medical Council and Kerman Legal Medicine Organization during 2010 - 2014. The inclusion criterion was the physicians who had been complained against. The records of the physicians were reviewed after obtaining the required permit to access the files and after providing the research commitment to maintain the confidentiality of their information. Data were recorded in a data collection form, and all the information about the physicians and patients remained completely confidential and anonymous. The data of the physicians were collected on their age, gender, academic degree, specialty, work experience, place of failure, and type of medical malpractice. Data analysis was performed in SPSS.

Among 167 cases of medical malpractice, the minimum and maximum number of the cases belonged to the years 2010 (n = 28) and 2014 (n = 41), respectively (Figure 1). The academic degree of most of the physicians who had been complained against was the specialty degree (74.04%). In addition, most of the cases that had been convicted of medical malpractice in the treatment in the final judgment were the physicians with the specialty degree (73.65%) (Table 1). The highest rate of complaints was reported in the specialties of gynecology (17.2%), orthopedics (16.3%), and general surgery (15.7%). The highest number of the medical malpractice cases was also observed in the specialty field of ophthalmology (20.95%) (Table 2).

Among 167 investigated medical malpractice cases, the status of the plaintiff after the medical malpractice was 79 cases of maim (47.30%), 52 cases of death (31.13%), and 36 cases without maim (21.55%). The frequency distribution of the complaints based on the status of the plaintiff was observed in the governmental hospitals (teaching/non-teaching; 67.31%), private hospitals (12.88%), treatment centers (governmental/private; 12.34%), and private clinics of the physicians (7.44%). In most of the cases, medical malpractices had occurred in governmental hospitals (64.07%), followed by treatment centers (19.16%), private hospitals (11.37%), and private clinics of the physicians (5.38%).

According to the results of the present study, the highest frequency of the complaints was observed in specialized physicians in gynecology and orthopedics. This is in line with the findings of Siabani et al. and Raeissi et al. (17, 22). Even the slightest deviation from the scientific standards in gynecology could lead to severe and fatal complications since gynecology and midwifery directly affect maternal, embryonic, and neonatal health (14).

Every activity requires proper skills and adequate experience. Physicians should accept the duties in which they have sufficient expertise and experience. Furthermore, they should perform all therapeutic procedures meticulously and accurately. In the present study, the physicians were guilty in 31% of the complaint cases, which is consistent with the study by Pakis et al. (23). According to the findings of Raeissi et al., approximately 36% of the total number of the complaints was confirmed as medical malpractice, and physicians were acquitted in 2,542 cases (64%) (22). In another research, Hwang et al. reported that among 946 medical malpractice claims, only 14.1% of the verdicts were against clinicians (24).

According to the current research, most of the medical malpractice cases by the physicians occurred due to imprudence and carelessness, and 85% of the physicians injured the patients due to the negligence of the essential medical procedures and inattention to the treatment. Consistent with our findings, Haghshenas et al. stated that most of the medical malpractices of physicians involved imprudence and carelessness (25); this could be due to the inappropriate organization of healthcare systems. Some effective solutions in this regard include the better organization of healthcare systems, increasing the level of treatment insurance coverage, determining and intensifying penalties, and more careful observation of medical ethics. In contrast with our findings, Raeissi et al. reported that most of the failures in medical practice occurred due to the lack of skills (30.4%), followed by negligence (29.2%) (22).

In the current research, the academic degree of more than 70% of the guilty physicians was specialty, and most of the medical malpractice cases were observed in ophthalmology. According to a study conducted in Iran, 1,869 complaints were filed against physicians, 155 of which were in ophthalmologists (26). This is because ophthalmology is an invasive field, and the therapeutic processes in this field involve higher risk levels. In other words, the patients who require surgery tend to have more unstable conditions, which in turn lead to the higher frequency of medical malpractices in this field.

According to the results of the present study, half of the complaints were recorded after the death and maim of the patients, and the remaining were registered without damage. This is consistent with the study by Haghshenas et al., which indicated that maim was the most frequent cause of patient complaints (25). In the research by Hwang et al., 46.3% of patients named in the claims had either died or been gravely injured (24). It is possible to reduce patient complaints by offering the necessary scientific and reasonable comments to the patient regarding the possible injuries and complications of any procedures, efficacy rate of the conducted therapeutic procedures, and inevitable complications of therapeutic interventions through honesty, commitment, and modesty. Furthermore, the abilities of physicians must improve in relation to patients through implementing training workshops and emphasis on the provision of significant information about the treatment procedure. The number of patient complaints could also be reduced by considering moral and religious standards without the involvement of physicians in the cases where they lack the required expertise (25).

In the current research, approximately 50% of the medical malpractices caused maim, and 31.13% resulted in the death of the patients. This finding is inconsistent with the results obtained by Bastani et al. (2), which demonstrated that 82.86% of malpractice cases led to death, while impairment occurred in 17.14% of the cases. Therefore, physicians should be careful about the treatment procedure and consider all the aspects of care meticulously.

The present study indicated that more than half of the patient complaints and most of the medical malpractices (64.07%) occurred in governmental hospitals. According to Rafiezade et al., most of the medical malpractices occurred in the private clinics and treatment centers of physicians (27). In the research by Özdemir et al., 36.8% of the claims were placed in private clinics and hospitals (21). These findings are inconsistent with the present study, which could be due to the higher rate of medical errors in the governmental hospitals providing educational activities. Furthermore, patients refer to governmental centers more commonly due to the high costs of treatment in private healthcare centers. The rate of patient complaints and medical malpractices increases with the higher number of clients in healthcare centers.

Hereby, we extend our gratitude to Kerman Medical Council and Kerman Legal Medicine Organization for assisting us in this research project.