The Nasal Carriage of Staphylococcus aureus and Its Antimicrobial Susceptibility Pattern in Secondary School Students in Kurdistan Region, Iraq 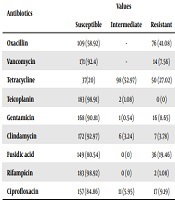 Staphylococcus aureus is a common commensal bacterium of the human body and a potential pathogen, causing public health hazards. Due to various virulent factors and growing antibiotic resistance, bacteria could cause various infections, ranging from minor skin infections to life-threating sepsis.

The present study aimed to evaluate the prevalence rate of S. aureus and determine its antimicrobial sensitivity profile in the secondary school students in Duhok City, Iraq.

Samples were collected from the anterior nares of 492 volunteers aged more than 16 years in different cities, including Akre, Amedye, Bardarash, and Duhok. Conventional laboratory tests were performed for the identification of the bacterial isolates. In addition, the antimicrobial sensitivity test was carried out in accordance with the Clinical and Laboratory Standards Institute (CLSI).

According to the results, the prevalence rate of S. aureus was high, and the species were more common in females. Therefore, further investigations are required to monitor the S. aureus antimicrobial profile and implement proper plans to manage the associated issues.

Staphylococcus aureus is a commensal bacterium, which colonies in the nostrils in approximately 25% - 35% of healthy individuals (1), as well as the other regions in the body (e.g., inguinal region) (2). The colonization is influenced by various environmental risk factors, such as age, seasonal variations, and specific diseases (3, 4). S. aureus is considered to be an opportunistic microorganism, which could cause various diseases in humans through possessing several virulence factors (e.g., toxins and enzymes) or invasion to the tissues (1, 5). Furthermore, the microorganism causes various infections in the community and hospitals, including skin and soft tissue infections, pneumonia, septicemia, and urinary tract infection (1, 6, 7).

Another notable aspect of S. aureus isolates is the development of resistance patterns to antibiotics such as methicillin and vancomycin. Antibiotic resistance increases the potency of bacteria and severity of infections, thereby leading to high mortality (8). Recently, community-acquired methicillin-resistant S. aureus has raised notable concerns regarding public health in different communities (9). Several studies have been focused on the prevalence of S. aureus in the community in Iraq (2, 4, 10, 11), as well as among health worker (12). Therefore, the continuous monitoring of resistance patterns is required to accurately determine the prevalence status of S. aureus colonization in this region, followed by the provision of the antibiogram profile of the bacterium.

The present study aimed to determine the prevalence rate of S. aureus nasal carriage in secondary school students in various districts in Duhok City, located in the Kurdistan Region of Iraq. In addition, we evaluated the antibiotic susceptibility of S. aureus isolates against a wide range of antibiotics of different classes.

This cross-sectional, community-based study was conducted on subject aged ≥ 16 years during January-August 2018. The participants were collected from the secondary schools in the cities of Akre, Bardarash, Amedye, and Duhok, located in the Kurdistan Region, Iraq. All the secondary schools in the covered region were introduced into a computer-based program, and the software randomly selected the schools and classes within each school. On the day of the experiment, all the students in the selected classes were recruited.

The exclusion criteria of the study were as follows: (1) history of hospitalization and surgery; (2) recent antibiotic consumption; (3) dialysis visits; (4) prolonged stay in a health care unit within one year before the nasal swab taking; (5) having a cannula/catheter during the sampling; (6) MRSA diagnosis and (7) presence of soft tissue and skin infections (2, 8, 10). The criteria were tested using questionnaires via face-to-face interviews with the participants simultaneous with the collection of their demographic data.

Samples were collected from the anterior nares of the subjects using sterile swabs wetted by sterile distilled water, and smears were also collected by rolling in the nares. The brain-heart infusion (BHI) media (Neogen Company, UK) was used for the transportation of the samples to the microbiology laboratory for further experimentation.

3.4.1. Isolation and Identification of Staphylococcus aureus from the Swabs

S. aureus isolates were identified and isolated using several conventional tests. The swabs were inoculated into the BHI and incubated overnight. Following that, the bacterial isolates in the BHI were cultured on Mannitol salt agar (Neogen Company, UK) for the identification of S. aureus based on specific phenotypic characteristics, such as golden colonies and the yellow color of the culture media as an indicator of mannitol fermentation by S. aureus. Furthermore, catalase test and gram staining were performed to distinguish S. aureus from other Gram-positive cocci, and tube coagulase test was carried out to differentiate the species from other Staphylococcus spp. (13).

Antibiotic sensitivity test was performed on the isolates using the Kirby-Bauer disk-diffusion method and agar dilution assay for oxacillin and vancomycin. Various antibiotics of different classes were used, and the Mueller Hinton agar (Neogen Company, UK) was applied as the standard media for the test. The examined antibiotics included oxacillin (6 µg/mL), vancomycin (8 - 30 µg/mL), tetracycline (30 µg), teicoplanin (30 µg), gentamicin (10 µg), clindamycin (2 µg), rifampicin (5 µg), ciprofloxacin (5 µg), and fusidic acid (10 µg). The antibiotic sensitivity tests for these antibiotics were performed in accordance with the Clinical and Laboratory Standards Institute (CLSI), and the results were also interpreted correspondingly (14).

Written informed consent was obtained from the participants for sample collection and using their demographic data for research purposes. Furthermore, the study protocol was approved by the Scientific Committee of the College of Medicine at the University of Duhok in Kurdistan Region, Iraq.

In total, 590 subjects were interviewed in the present study, and 98 participants (16.6%) were excluded based on the exclusion criteria. Finally, 492 subjects were recruited, including 204 males and 288 females aged 16 - 21 years.

Among 492 subjects, 185 cases (37.6%) had S. aureus isolates, including 57 males (30.8%). At the next stage, 185 isolates were assessed in terms of antibiotic sensitivity. To this end, the isolates were initially examined for methicillin resistance using oxacillin as the surrogate marker. Among the studied strains, 76 cases (41.08%) were resistant to oxacillin.

The isolates were also tested in terms of vancomycin sensitivity, and 14 of the tested samples (7.56%) were resistant to this antibiotic. The highest susceptibility was observed against rifampicin in 183 (98.92%) of the samples. The results of the antibiotics sensitivity test are presented in Table 1.

Staphylococcus aureus is a predominant normal flora of the nasal passage and the most virulent species of Staphylococci, which leads to thousands of deaths each year (3, 7). In the present study, the prevalence of S. aureus was estimated at 37.6%, which is higher compared to the previous findings in the same region (17.5% - 30%) (2, 4, 10, 15). In addition, the prevalence in our region was higher compared to the reported rate in the southern region of Iraq (20%) (11), Iran (28%) (9), Thailand (29.7%) (16), and Malaysia (31%) (17). In contrast, the estimated prevalence rate was lower compared to the rates in the healthy individuals employed in the cafeterias in Iraq (45.6%) (18). This discrepancy between our findings and the other studies in Iraq may be due to geographical diversity and variable environments in sample collections, which might be a risk factor for S. aureus colonization in the body (3, 4), as well as the differences in the sample populations.

According to the current research, 41.08% of the bacterial isolates were resistant to oxacillin, the rate of which is higher compared to the previous studies performed in Syria (9.4%) (19) and the Duhok community in Iraq, with the values reported to be 2.04% (4), 4.2% (15), 21.95% (2), and 4% in this region (10). The significantly high resistance rate of S. aureus against oxacillin is alarming regarding antibiotic stewardships to control this rising trend. However, the reported rate was comparatively lower in a study carried out in Nigeria (47.15%) (20).

In the current research, 7.56 % of the bacterial strains were resistant to vancomycin, and the rate was higher compared to China (4.4%) (21) and Syria (2%) (19). The high resistance rate to vancomycin in our research may highlight the misuse of antibiotics, and urgent multidisciplinary planning is required to overcome the issue of vancomycin resistance. Additionally, the resistance of the S. aureus isolates to tetracycline was estimated at 27.02% in the current research, which is higher than the values reported in Nepal (20%) (22) and Malaysia (17.3%) (17) and close to the other findings in the Kurdistan Region (25%) (18), while lower than the reported rate in Thailand (34.2%) (16).

According to the results, the prevalence rate of S. aureus was relatively high, and this bacterial species was predominant in females. The estimated prevalence rate was higher than the previous studies conducted in Duhok City (Iraq), indicating the rising trend of antibiotic resistance pattern. Therefore, it is recommended that infection control practices be implemented and antibiotics stewardship be promoted in the form of awareness programs in order to minimize the spread of S. aureus infections in the community, especially in large populations (e.g., schools, dormitories, and sports gyms).