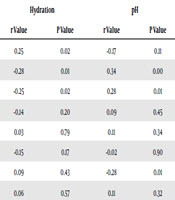 Local cutaneous change is one of the factors involved in the pathophysiology of skin manifestations in chronic kidney disease (CKD).

To determine the skin’s biophysical parameters in different CKD stages and the relationship with biochemical and hematological parameter, pruritus severity, and body water content.

The aetiology of uraemic pruritus is multifactorial. Xerosis is a common association (5). Parathormone, histamine, tryptase, uraemic toxins, upregulation of Th1, and interleukin-6 are thought to cause neuropathy and inflammation within the skin that lead to pruritus (6, 7). Central nervous system opiod imbalance is another aetiological factor recently targeted in the management of uraemic pruritus (7). Uraemic pruritus causes multiple morbidities including excoriations and ulcerations that predispose to infection, nodular prurigo, and lichenification (6). Moderate to severe pruritus leads to feeling drained, poor sleep quality, depression, and higher risk of mortality (8).

Local cutaneous changes along with systemic responses contribute to the clinical manifestations in patients with CKD. The interactions between multiple factors in the pathophysiology of both xerosis and pruritus are still unclear. The effect of patients’ fluid volume status on xerosis and pruritus has been poorly investigated. Excessive accumulation of fluid in the interstitial spaces may cause proprioceptive nerve fiber dysfunction due to edema. Is xerosis a marker for increased cutaneous insensible water loss? An objective description of cutaneous biophysical parameters and total body water in CKD patients will contribute to further understand the pathophysiology of pruritus.

The objectives of this study were to determine the biophysical parameters (transepidermal water loss, hydration, and pH) of the skin in different stages of kidney impairment. We examined the relationship between these cutaneous parameters with biochemical and haematological parameters, severity of uraemic pruritus, and body water content.

Sample size calculation was performed using the Power and Sample Size Calculation software (11) based on the results of a previous study that examined TEWL in haemodialysis patients (12). The result was normally distributed with a standard deviation of four, and the difference in mean TEWL of dialysis patients and control was 2.6 (12). The calculated sample size was 90, considering a 20% drop out rate to be able to reject the null hypothesis that the population means of the experimental and control groups are equal with probability (power) of 0.8. The type I error probability was 0.05. Statistical analyses were performed with IBM®SPSS statistical software. Majority of continuous variables were normally distributed; thus, results are expressed in means with standard deviation and parametric tests were used. CKD severity was grouped into mild (stages 1 and 2), moderate (stage 3) and severe (stages 4 and 5). One way ANOVA tested differences in biophysical parameters between the CKD severity groups. Pearson correlation test was used to determine correlations between continuous variables. Multinomial logistic regression was performed to determine independent predictors for severity of pruritus. Age, gender, ethnicity, body mass index, duration of CKD, CKD severity, cutaneous biophysical parameters, haematological, and biochemical parameters were included in the regression analyses. Ethical approval was obtained from the Research Ethics Committee, the National University of Malaysia project code FF-2019-192.

Table 1. Characteristics of the Study Populationa

Table 2. Relationship Between Cutaneous Biophysical Parameters and Water Content with Severity of CKDa

Cutaneous and systemic factors contribute to development of cutaneous manifestations of CKD. Changes within the epidermis, which affect the skin’s barrier function, play a role, especially in development of pruritus and xerosis. Both symptom and sign are essential features of endogenous eczema where disruption of the epidermal barrier is a fundamental aspect in its pathophysiology. Impairment of stratum corneum integrity reflected by increased TEWL (13), higher skin surface pH (13, 14), reduced glycerol content (13), and lower hydration (13-15) has been demonstrated in case control studies involving CKD patients on dialysis. One study did not demonstrate significant differences in TEWL (12). Skin hydration was lower in peritoneal dialysis patients compared to controls, however, there were no differences in the skin hydration of patients who were on haemodialysis (16). All case control studies were performed on patients who were on dialysis (12-16).

Changes in TEWL, hydration, and pH are expected to worsen with increased severity of CKD in non-dialysis patients based on the findings of these case control studies (12-16). However, these were not demonstrated in our cohort of patients with CKD stage 1 - 5. A trend towards increased pH and reduced hydration was observed, however, there were no significant differences in the values of pH and hydration at multiple sites. The trend in TEWL values differed according to site, the mean of all sites showed non-significant reduction in TEWL with more severe CKD. Xerosis and pruritus commonly affect the extremities (1), we measured all biophysical parameters at both upper and lower limbs but did not see significant differences. Results from correlation analyses suggested impairment in hydration and pH with CKD severity. Higher total body water was associated with impaired TEWL. TEWL, hydration, and pH are affected by age and gender (17-19). TEWL is higher in females until the age of around 50 years. Skin pH is higher in females and with older age. Hydration increases to a peak at 30 to 40 years and then declines with older age (17-19). Our study included patients aged ≥ 50 years to minimize the effect of age and there were equal number of males and females. Epidermal barrier dysfunction most likely worsens with chronicity of severe CKD as seen in dialysis patients rather than related to severity of CKD. Alternatively, the changes in the epidermal barrier could be enhanced by dialysis. Rapid and frequent dynamic changes in total body water during maintenance haemodialysis could contribute to the state of water loss of the skin.

Our data demonstrated correlations between increasing CKD severity with lower skin hydration and higher skin pH. Reduced skin hydration, increased pH and increased TEWL are well established characteristics of eczematous skin. Xerosis and eczematous skin are common in dialysis patients and patients with CKD (1, 2). To the best of our knowledge, the relationship between total body water with cutaneous biophysical parameters has not been investigated before. In our patients, increased body water was associated with reduced TEWL. Stratum corneum hydration has been demonstrated to improved post-dialysis compared to pre-dialysis but its effect on TEWL was not documented (15). These finding suggest intra and extra-vascular fluid status inversely affect skin hydration and TEWL.

Pruritus is more prevalent in patients who had been on haemodialysis for longer compared to those newly started on haemodialysis and non-dialysis CKD (1, 2, 8). Severity of pruritus in haemodialysis patients is related to the male gender, co-existing lung disease, heart failure, neurological disease, hepatitis C, liver disease with ascites, higher serum calcium or phosphorus, lower serum albumin, and increased white blood cell count (8). More recent developments on CKD related pruritus focused on peripheral neuropathy and upregulation of central µ-opioid receptors (6, 20). However, use of emollients to relieve pruritus and xerosis has been shown to be beneficial and is recommended in the management of uremic pruritus with or without xerosis (5, 6, 20). The frequency of pruritus is higher when xerosis is present (1, 5). Xerosis maybe one of the stimuli that drive altered responses from cutaneous nerve endings resulting in itch. The most likely reason we did not find any relationship between pruritus with epidermal biophysical parameters between CKD stages was due to the small number of patients with xerosis. We did not properly document the presence of xerosis, which is a limitation in this study. However, clinically apparent xerosis was reflected objectively by biophysical measurements.

There were no differences in cutaneous biophysical parameters in non-dialysis CKD stage 1 - 5 patients. Eczematous changes of the skin occur with increasing severity of CKD as demonstrated by correlations between higher urea and creatinine with lower hydration and higher pH. However, we did not observe an increase in TEWL values, which is an essential feature of eczematous skin. Pruritus was not related to CKD stage, cutaneous biophysical, haematological, and biochemical parameters. We found increased total body water associated with lower TEWL, which suggested that insensible water loss through cutaneous evaporation was not influenced by patients’ volume status. Our results need confirmation by further studies involving larger number of patients in each CKD stage. We recommend routine skin examination in moderate to severe CKD patients and regular use of moisturizer should be advised if these changes are observed.

Copyright © 2020, Journal of Skin and Stem Cell. This is an open-access article distributed under the terms of the Creative Commons Attribution-NonCommercial 4.0 International License (http://creativecommons.org/licenses/by-nc/4.0/) which permits copy and redistribute the material just in noncommercial usages, provided the original work is properly cited.
download pdf 130.18 KB Peer Review Comments ( 154.42 KB) Get Permission (article level) Import into EndNote Import into BibTex
Number of Comments: 0