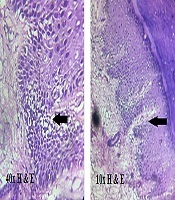 Acral Lentiginous Melanoma on the Palm: Unusual Site with a Fatal Outcome

Melanoma is more common in the western countries than among darker pigmented individuals, but acral lentiginous is the most frequently encountered subtype among Indians.

An Indian male presented with a progressively increasing blackish ulcerated nodule on left palm overlying a heterogeneously hyperpigmented macule present since 6 months. A diagnosis of acral lentiginous melanoma was made and a wide local excision with left axillary dissection was done. The patient missed the initial sessions of chemotherapy and succumbed three months later due to metastatic complications.

Melanoma may present with varied morphologies which may resemble benign dermatoses at initial presentation causing a delay in diagnosis. Occurrence of acral lentiginous melanoma on the palm is unusual and may go unnoticed due to its innocuous appearance. The survival rates drop drastically as the tumor metastasizes. Thus, a high index of suspicion is warranted to make a timely diagnosis in an attempt to improve patient outcome.

Melanoma accounts for approximately 75% of all cancer related deaths, albeit comprising only 3% of all skin cancers diagnosed each year globally (1). The annual incidence proportion of melanoma in the world is 0.35 (2) while that in India is only 0.03 (3). Subtypes of melanoma are nodular, superficial spreading, lentigo maligna and acral lentiginous. Superficial spreading type prevails in the Western population while acral lentiginous is the most common variant in darker pigmented individuals (4). Clinical course, prognosis and management protocols might differ with specific sub-types, which underlines the importance of early accurate identification to improve outcomes. Herein, we present a case of an Indian male with acral lentiginous melanoma (ALM) on the palm, an unusual site of involvement, which rapidly progressed to metastatic stage.

A 50 years old male, farmer by occupation, presented with a single, painless dark-colored lesion over the left palm, noticed since 6 months ago, progressively increasing in size with spontaneous ulceration since 7 days ago. According to the patient, the lesion occurred after a thorn prick while working in the farm. No significant family history could be elicited. Examination revealed a single hyperpigmented nodule over the medial side of the left palm with a rough surface and irregular margins overlying an irregular hyperpigmented patch with few fissures at the borders (Figure 1). A single ulcer was noted on the inferior aspect of the nodule which bled on manipulation. The left central group of axillary lymph nodes were palpable, non-tender and firm, approximately 1cm in size. General, systemic and the rest of the cutaneous examination (including mucosae and nails) was unremarkable. Dermoscopy of the surrounding hyperpigmented patch showed irregular dark brown pigmentation with multiple erosive areas over a background of brown unstructured pigment. Differentials considered were infected hematoma, deep fungal infection, post-traumatic tache noir/talon noir and melanoma. Histopathological examination of the nodule showed multiple round to oval cells with hyperchromatic nuclei and scant cytoplasm arranged around the rete ridges (Figure 2). A biopsy from the underlying hyperpigmented patch showed no tumor cells or junctional activity. Immunohistochemistry could not be done due to financial constraints. Sonography of the left axilla was suggestive of nodal metastasis. An MRI of left hand demonstrated a lesion with dimensions 20 × 24 × 34 mm (AP × ML × SI) located in the subcutaneous plane with no involvement of deeper structures or spread in the surrounding area. Radiological screening and hematological investigations were normal. Thus, a final diagnosis of acral lentiginous melanoma Stage IIIc (T4bN1bM0) (4), (Clark’s level 5) was made. The patient underwent surgical excision with intraoperative frozen sections to ensure free margins. Axillary dissection was performed and one lymph node from each of the five groups was excised. The histopathology of the excised surgical specimen confirmed the diagnosis. One of the five lymph nodes was found to be involved. The patient was advised follow up for chemotherapy. However, he missed three consecutive chemotherapy cycles and returned 3 months later with hepatic and pulmonary metastases. He could be offered only palliative treatment and unfortunately succumbed to the tumor two weeks later. Acral lentiginous melanoma (ALM) occurs on non-hair-bearing sites like palms, soles, subungual area and mucosae. In the early stage, it appears as a pigmented macule (as in our case). The ALMs exhibit a biphasic growth pattern (5). The radial growth is characterized by a macular pigmented lesion with variegate pigmentation (5). A clinically apparent vertical growth phase in the form of a nodule or ulcer occurs later (5). Ulceration is more often seen in ALM as compared to other types (5).

In our case, the tumor showed a similar pattern as it started as a variegate-colored macule with irregular borders progressing into an ulcerated nodule overlying the macule. Most of the cases documented in India have reported lesions on sole of foot but our case is unique to have the tumor arising from the palm. The previous two Indian cases reported (5, 6) with palmar lesions may probably have had a better outcome as they presented early and did not metastasize, thus highlighting the importance of identifying these lesions in the radial growth phase itself, before they progress to the aggressive, invasive form. Melanomas usually occur over sun-exposed areas. Acral lentiginous melanomas peculiarly occur over the photo-spared areas, a feature that possibly contributes to a delay in diagnosis. Moreover, the innocuous appearance of the lesions can be misleading to both patient and health care provider, thereby amplifying the time lag between onset and correct diagnosis, which as a corollary, would further prolong the time-to-treatment initiation. Other factors known to impede timely and appropriate management are elderly age, hidden site and occasionally, lack of pigmentation. The ALM lesions are frequently treated or followed for considerable time under the clinical diagnosis of wart, callus, fungal infections, subungual hematoma, keratoacanthoma, non-healing ulcer, foreign body, nevus, ingrown toenail, etc. depending upon the appearance of the lesion (7).

Histopathologically, ALM may have spindled or epithelioid cellular morphology and must be distinguished from benign acral lentiginous nevi, which can display site-related atypia. In the early stages, it may show subtle changes with scattered atypical melanocytes located close to the basal layer (8). In the radial growth phase, lesions are characterized by marked acanthosis, elongation of rete ridges and lentiginous proliferation of atypical melanocytes along the basal epidermis (8). Atypical melanocytes can extend along the sweat ducts into the deep dermis. In the vertical growth phase, tumor nodules often contain predominantly spindle shaped cells and are associated with a desmoplastic reaction (9). The junctional component of thicker tumors shows nesting of tumor cells and upward migration to the cornified layer. Immunohistochemical staining (positivity for HMB 45, S-100, Melan-A, vimentin) provides vital clues. Though S-100 is most sensitive amongst all markers, S-100 negative ALM has been reported (10) (intensity of melanin content correlates well with HMB45 rather than S-100). Few studies suggest that acral melanomas undergo a more aggressive course independent of tumor thickness (9, 11). Despite this, it is unclear whether the poorer prognosis in (ALM) compared to other variants is due to a delayed diagnosis or by virtue of it being a biologically distinct entity, or (as seems most likely) a combination of both (9). If detected early, ALM may have a similar cure rate as the other types of superficial spreading melanoma but survival rates drop drastically as the tumor metastasizes (12). Our patient had an extremely fulminating course which eventually culminated in death barely 6 months within diagnosis.

Our case of acral lentiginous melanoma emphasizes that early diagnosis is imperative for a better prognosis. Therefore it is recommended that all suspicious-appearing hyperpigmented lesions be vigorously and thoroughly investigated to facilitate timely interventions with a better chance for favorable outcomes.

Copyright © 2019, Journal of Skin and Stem Cell. This is an open-access article distributed under the terms of the Creative Commons Attribution-NonCommercial 4.0 International License (http://creativecommons.org/licenses/by-nc/4.0/) which permits copy and redistribute the material just in noncommercial usages, provided the original work is properly cited.
download pdf 4.38 MB Peer Review Comments ( 118.80 KB) Get Permission (article level) Import into EndNote Import into BibTex
Number of Comments: 0