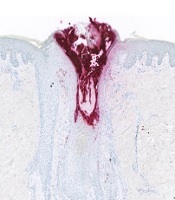 The etiology and different inflammatory steps associated with the development of an acne nodule remain unsolved.

This study aimed to investigate the main biological processes involved in acne nodules and compare them to those of papules.

Nodules, papules, and non-involved skin of the back (control) were biopsied to perform proteomic analysis using mass spectrometry, Luminex assay, and elastase staining on skin sections.

Many factors involved in the migration and function of immune cells, particularly those impacting leukocytes and neutrophils, were strongly and significantly higher in nodules than in papules and non-involved skin, while several enzymes involved in lipid metabolism were lower. Elastase staining confirmed strong neutrophil infiltration within and around the nodules.

Our results highlight the role of neutrophils during nodule formation in severe nodular acne of the back.

Acne is a chronic inflammatory disease of the pilosebaceous unit. It commonly occurs at puberty but is also observed in adults. Its pathophysiology involves different factors including hyperseborrhoea, abnormal follicular keratinization, hormonal changes, and Cutibacterium acnes proliferation in the pilosebaceous unit. As a result of their interactions, the cutaneous microenvironment changes and leads to inflammatory reactions through the activation of innate immunity of the host that ultimately fosters acne lesion progression (1). Severe nodular acne, graded as 4 or 5 on the Investigator’s Global Assessment Scale, is characterized by inflammatory nodules, and regularly associated with scarring (2). Acne nodules are defined as a solid skin mass with an induration of at least 5 mm or more in diameter (3). Severe nodular acne frequently remains refractory to local therapy (4). Thus, isotretinoin has become the standard therapy in severe acne (5). Even though effective in treating severe acne, safety issues are associated with oral isotretinoin, including teratogenicity, metabolic abnormalities, and depression (6).

To date, the etiology and different inflammatory steps associated with the development of an acne nodule remain unclear. Using proteomic techniques, this study aimed to investigate the main biological processes involved in nodules compared to papules.

This study enrolled 12 subjects aged between 16 and 35 years with severe nodular acne of the back (3). The study was approved by health authorities and the local ethics committee, and registered under number ID-RCB: 2015-A01139-40. Good Clinical Practices were followed (see Supplementary File). To be enrolled in the study, subjects had to be aged between 16 and 35 years and to present with severe nodular acne on the back according to ECLA (Echelle de Cotation des Lesions d’Acne) grading, defined by the presence of at least two nodules of 5 mm (3). Lesions were clinically characterized by an experienced dermatologist (more information available in (7)). Biopsies of a new nodule, a papule, and non-lesional skin were taken. Proteins were extracted from the frozen sections of the biopsies as described in the material and methods section in the supporting information. The resulting protein extracts were used for label-free mass spectrometry analysis and for the quantification of a selected panel of cytokines, chemokines, and growth factors using Luminex technology (see material and methods in Supplementary File). Data analysis was performed using Genedata software. Gene ontology (GO) category enrichment analysis was performed using DAVID 6.7 (http://david.abcc.ncifcrf.gov/), as shown in supporting information.

Using quantitative mass spectrometry (MS), untargeted proteomic analysis was performed to identify the main biological processes that were modulated in acne lesions. More than 1,100 proteins (including isoforms) were quantified with at least two peptides found in both nodules and papules (Appendix 1 and 2 in Supplementary File). Limited but significant modulations were detected in papules compared to non-lesional skin, while substantial changes were observed in nodules. Thus, we focused the analysis on the nodules. Proteins showing a fold modulation in nodules superior to 1.2 or inferior to 0.8 and a significant BHQ-value (358 proteins) were analyzed for enriched biological processes based on gene ontology in gene ontology (GO) software and results are summarized in Table 1. As expected, inflammation was highlighted as a relevant event in nodules. However, less expected biological processes such as extracellular matrix organization, adhesion, synthesis, and metabolism of proteins were also identified. Table 2 provides a focus on the biological processes known to be involved in papule lesions (1, 2): inflammation and sebaceous gland shrinking. As an example, azurocidin and cathepsin G were both strongly increased in nodules. These proteins are secreted in active forms during neutrophil activation at inflammatory sites, which contribute to the regulation of inflammatory and immune responses (8-10). They also actively participate in the earliest line of defense against invading microorganisms as do neutrophil defensin 1 and 2 microbicidal peptides, which were also found to be induced in nodules. Azurocidin, in combination with Myeloperoxidase, is involved in the digestion of phagocytized microorganisms (10). Some of those proteases are also implicated in the organization and remodeling of extracellular matrix (ECM), such as Myeloblastin (neutrophil proteinase-4 or proteinase-3) that degrades elastin, fibronectin, laminin, vitronectin, and collagen types I, III, and IV (9, 11, 12). Altogether, these neutrophil’s secreted proteins might contribute to the spread of inflammation and the formation of the nodule. In contrast to psoriasis where recent experiments suggest a role for beta-1 integrin (CD29) in epidermal hyperproliferation and inflammation (13)., only beta-2 interin was strongly induced in acne nodules (Appendix 1 and 2 in Supplementary File). Beta-2 integrins are leukocyte-specific membrane receptors that are crucial for host defense (14, 15). Modulation in the expression of this integrin was reported, especially in patients with acute infection (14, 16). and was proposed as an important integrin, which is essential for promoting neutrophil recruitment into inflamed tissue and pathogen phagocytosis (15). Several enzymes involved in lipid metabolism were notably decreased in nodules compared to non-lesional skin following analysis by mass spectrometry (Table 2 and Appendix 1 in Supplementary File). Many of them (e.g., AWAT2) are usually strongly expressed in the sebaceous gland, which suggests the destruction of sebaceous glands as proposed by Plewig and Kligman (17). The MS analysis allowed the detection of many additional proteins that were modulated in nodules (Appendix 1 in Supplementary File) and despite not being statistically significant, these findings are in line with our results.

bProteins showing a fold modulation in Nodules superior to 1.2 and a significant Q-value were analyzed for enriched biological processes based on gene ontology in Gene Ontology (GO) software. As expected, inflammation was highlighted as a relevant event in nodules. However, less expected biological processes like extracellular matrix organization, adhesion, synthesis, and metabolism of proteins were identified and are summarized in Table 1. Table 2 summarizes significantly modulated proteins in the MS analysis.

Table 2. A Focus on Biological Processes Known to be Involved in Papule Lesionsa, b

To refine the inflammatory events occurring in nodular acne, the quantification of a selection of cytokines, chemokines, and growth factors was performed using Luminex assays. Twenty-one proteins were detected at a level higher than the LOQ in a range of 0.1 pg/mg to 2,300 pg/mg after normalization using the total content of proteins (Appendix 3 in Supplementary File). Table 3 summarizes the modulation of those 21 proteins in papules versus non-lesional skin and nodules versus non-lesional skin. A statistically significant increase in cytokines and chemokines related to Th17 cells (IL17A, IL17F, and CCL20) and neutrophil recruitment (CXCL8 and CCL3) were observed in nodules. In comparison, those proteins were also induced in papules but at a lower level and not found to be statistically significant. Additionally, a statistically significant decrease in IL7 was observed in nodules but not in papules, which is in line with our previous data using early papules (18). Interestingly, CXCL8 was significantly increased in nodules and moderately increased in papules. This chemokine is a well-known powerful effector of neutrophil chemotactism. In addition, CXCL8 is involved in not only innate but also adaptive immunity including the activation and regulation of Th17, Treg, and γδ T cells (19). Moreover, IL17 is known to participate in neutrophil infiltration at the site of inflammation. Besides, CD4+IL-17+ T cells accumulate around the pilosebaceous unit and are in close contact with sebocytes in acne lesions. In papules, the increase in inflammatory mediators was of lower intensity compared to nodules. Finally, the immuno-detection of the elastase protein was performed to confirm the strong infiltration of neutrophils within nodules, using skin sections of non-lesional skin, papules, and nodules (Figure 1). Any stained cells were detected in non-lesional skin. In papules, localized staining was observed within the pilosebaceous unit while strong staining was visible in nodule sections in and around the pilosebaceous unit. This is related to the destruction of the pilosebaceous unit in the nodule and has been previously observed (17). Our proteomic results suggested that in the nodule, inflammation is driven by neutrophils and leads to the destruction of the sebaceous gland associated with a strong modification of the cellular matrix. Interestingly, in the same subjects, 77.3% of baseline nodules had evolved into atrophic scars within four weeks (7). In addition, a correlation was observed between the alteration of sebaceous glands and long-lasting immune response versus atrophic scar formation in patients prone to scar acne (20). This suggests that it could be possible to prevent scar formation by limiting neutrophil recruitment during nodule formation. 5-µm sections were prepared from paraffin-embedded biopsies, elastase staining (in red), and nuclei were counterstained with hematoxylin (in blue).

In a prospective study on the nodule evolution, Khammari et al. observed that the majority of nodules evolved into an atrophic scar although lesion duration was short (7). However, the risk of a papule to evolve into an atrophic scar is less frequent and depends on the resolution of the inflammatory process (20, 21). A very similar immune response, characterized by elevated numbers of T cells, neutrophils, and macrophages, was observed by gene expression analyses of papules in patients prone and non-prone to scars (20). Here, using a large-scale gene expression profile, we also observed a similar inflammatory profile between papules and nodules (unpublished results). Therefore, the occurrence of scar seems to be more linked to the severity of inflammation rather than a different type of inflammatory actors.

In the present study, using large-scale and targeted analysis of proteins, we could highlight differences between papules and nodules, including several biological processes as remodeling of extracellular matrix, protease activities and recruitment of inflammatory cells including neutrophils.

First, we analyzed the protein content of non-lesional skin, papules, and nodules in biopsies taken from 12 subjects with severe nodular acne of the back. Using mass spectrometry, the nodule was found to display many proteins that were significantly modulated compared to non-lesional skin. In contrast, the modulation of proteins in papules was not statistically significantly different from that of non-lesional skin. In nodules, the observed increase in protein levels was related to the following biological functions: antimicrobial activities, remodeling of the extracellular matrix, protease activities, and recruitment of inflammatory cells including neutrophils. In contrast, enzymes involved in lipid metabolism were decreased in nodules compared to non-involved skin, suggesting an alteration of the pilosebaceous unit resulting in the destruction of sebaceous glands that may participate in scar formation. Then, using the Luminex assay, a much higher content of CXCL8, CXCL11, CCL3, CCL4, CCL20, IL6, IL17A, IL17F, IL27, TNF, and IL1B was observed in nodules than in non-lesional skin and papules. Finally, using immune staining, we confirmed a strong neutrophil infiltration in and around nodules, which was restricted to the pilosebaceous unit in papules.

Altogether, our results highlight the role of neutrophils during acne nodule formation and suggest that impaired neutrophil migration might limit the occurrence of new nodules and the risk of scarring in severe nodular acne of the back. These findings could inform future therapeutic approaches for the treatment of acne.

The authors thank Marie Ange Dagnelie and Amir Khammari for their participation in the clinical part of the study.

Copyright © 2020, Journal of Skin and Stem Cell. This is an open-access article distributed under the terms of the Creative Commons Attribution-NonCommercial 4.0 International License (http://creativecommons.org/licenses/by-nc/4.0/) which permits copy and redistribute the material just in noncommercial usages, provided the original work is properly cited.
download pdf 2.41 MB Peer Review Comments ( 134.60 KB) Get Permission (article level) Import into EndNote Import into BibTex
Number of Comments: 0