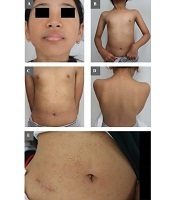 Primary Anetoderma in an Infant: A Case Report From Southeast Asia

Anetoderma is an elastolytic disorder, categorized by singular or multiple areas of macules or papules, which can lead to the herniation of subcutaneous tissue. Anetoderma is rare, and its incidence is unknown. Primary anetoderma or idiopathic anetoderma occurs when there is no underlying associated skin disease with unknown pathogenesis. It can be classified into two major forms: (A) the Jadassohn-Pellizzari type and (B) the Schweninger-Buzzi type. Little is known about the specific pathophysiologic processes underlying anetoderma, although the phagocytic destruction of the elastic fibers has been postulated as a major role-player in the lesions. Our case highlights the incidence of primary anetoderma in a Southeast Asian adolescent girl with the onset during infancy that spread throughout the child’s development, without a family history of the disease.

The term “anetoderma” is derived from anetos, the Greek word for slack, and derma for the skin. Anetoderma is an elastolytic disorder characterized by macular or papular localized areas of the flaccid skin, which may be depressed. It can be followed by the herniation of the subcutaneous tissue (1). The condition has been reported under various names, including macular atrophy, anetoderma maculosa, anetoderma maculosa cutis, and atrophia maculosa cutis (1, 2). Anetoderma is rare, and its incidence is unknown. Several hundred cases have been reported (1, 3). Primary anetoderma generally occurs in young adults between 15 and 25 years of age and more frequently in women than in men (1).

Primary anetoderma or idiopathic anetoderma occurs when there is no underlying associated skin disease with unknown pathogenesis (2, 3). Commonly, it is categorized into two groups: (A) mainly erythema, with preceding inflammatory lesions (Jadassohn-Pellizzari type), and (B) skin lesions without preceding inflammatory lesions (Schweninger-Buzzi type). This classification is only of historical interest because these lesions can coexist in the same patient; the prognosis and histopathology are also the same (1, 3-5). In the secondary anetoderma, the lesion occurs on the same site as another lesion, with various causes from other conditions such as infections, drugs, tumors (benign and malignant), inflammatory or autoimmune diseases (6, 7). Secondary anetoderma is probably more common than the primary form (2).

We herein report an anetoderma case in an adolescent girl with the onset around the age of seven months, with lesions starting from the face and spreading to the lower abdomen. No family history of anetoderma or other related diseases was reported.

A nine-year-old female, with Southeast Asian race and yellow-brown skin, was reported by her mother to have yellowish-white, round, and oval spots, indented or depressed on the same parts and protruding on other parts, located at the chin, neck, front chest, front and back left/right shoulder, and lower abdomen, with no itchiness or ache. The mother reported that the lesions started with small concave spots on the right cheek when the patient was seven-months-old. As the patient grew, the initial spots disappeared, but new and bigger lesions appeared starting from the chin to the lower body. Several medical interventions resulted in no improvement.

The patient was delivered at term (weight 2.8 kg; height 49 cm) as the second child. The mother was 26-years-old when delivering the patient and had no history of infection during pregnancy, with no tick bites reported. The mother had bleeding during the fourth month, but medical exams showed normal. The first child had died a few days after birth, two years before the patient's birth. The mother had another child at two-years-old with no lesion reported.

On clinical examination, the patient's general physical condition and mental health condition were normal. Skin lesions consisted of scattered, yellowish-white to skin-colored spots. The lesions varied from indented to protruding, with the smallest ones having few-millimeter diameters to the biggest ones having 30 mm-diameters. The lesions spread from the chin to the lower abdomen (Figure 1A-E). No sensory changes were associated with the lesions. Her medical history was unremarkable. The mother denied any previous infection, vaccination, or trauma before the development of skin lesions. No family history of lesions was reported either. 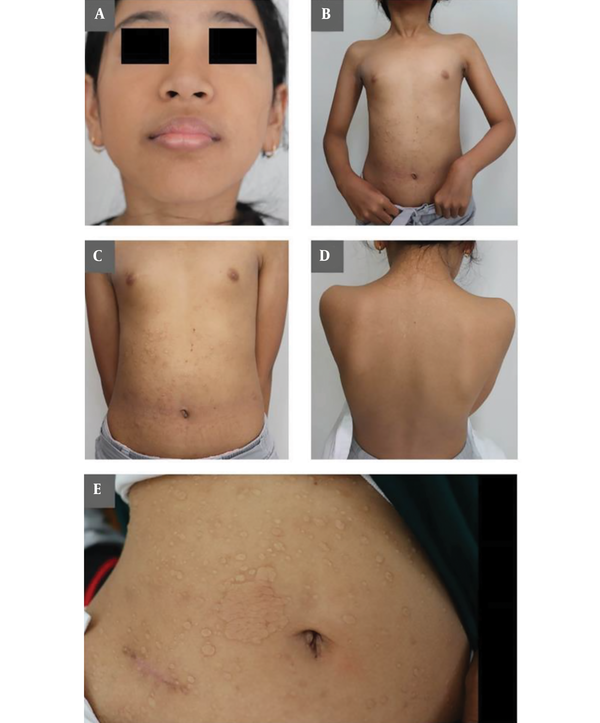 The results of laboratory tests, consisting of complete blood count, urinalysis, blood chemistry, including the erythrocyte sedimentation rate, and liver function tests were within the normal range. On the skin biopsy, hematoxylin and eosin staining showed normal epidermis tissue. On the dermis layer, thick, multiple inconsistent breaks of collagen structure with wide gap/spaces were observed (Figure 2A).

The Verhoeff-van Gieson stained sections showed a dermis layer with loss/diminished elastic fibers. Based on the clinical and pathological findings, the patient was diagnosed with Schweninger-Buzzi type primary anetoderma (Figure 2B).

Schweninger and Buzzi coined the term “anetoderma” in 1891, which was then followed by Jadasson in 1892, besides many other different terms (1, 8). One of the terms, “macular atrophy”, could be confusing due to the possibility of a mix-up with other conditions showing dermal atrophies (8).

The most common sites for these asymptomatic lesions are the chest, back, neck, and upper extremities (3). Less commonly, the lesions are distributed in the face (2, 5, 8). The scalp, palms, soles, and mucous membranes are usually spared (2). Little is known about the specific pathophysiologic processes underlying anetoderma (10). There has not been a conclusive theory on how anetoderma develops and why similar histopathologic yet different clinical characteristics exist (5).

Elastin is the main component of elastic fibers, with a high content of hydrophobic amino acids and strong cross-links, causing elastin as one of the most resistant and durable proteins in the human body. Transmission electron microscopy examination and scanning electron microscopy can evidence the fragmentation, granular degeneration, and reduction of elastic fibers (11). Currently, the phagocytosis of elastic fibers has been hypothesized as a major role-player in the pathogenesis of lesions in primary anetoderma. This is due to the presence of fragmented elastic fibers, broken by macrophages in the lesion border. A study by Ghomrasseni et al. (12) reported changes in the expression levels of several metalloproteinases (MMP2 and MMP9) and tissue inhibitors of metalloproteinases (TIMP in favor of elastolysis). Immunologic mechanisms may also play a role, as it can be associated with various systemic conditions, primarily antiphospholipid antibodies.

Anetoderma in preterm infants has been reported but not investigated as a primary focus. It has been suggested that the low level of elastic fibers in the dermis is related to prematurity while the pathogenesis for familial anetoderma is still unclear (2, 3, 5, 7). Rarely, anetoderma can be acquired genetically (10).

Kim et al. (5) examined the clinical and histopathological correlations of different types of anetoderma. The patterns of loss and the fragmentation of elastin in the dermis can change depending on the stage and severity of the disease. Elastic fibers, which consist of elastin and microfibril, could be the targets of antibodies in immunohistochemistry tests. In a test, the indented lesions showed decreased elastic tissue only in the upper dermis. The pattern of elastin destruction did not differ between the protruding types, but the destruction of the protruding type was greater than that of the indented type and could be due to the extended period of the disease; thus, it is speculated that the protruding type is a more advanced stage of anetoderma.

In routinely stained sections with Hematoxylin and Eosin and Verhoeff-van Gieson, no epidermal change from the lesion was detected, and the collagen within the dermis of the affected skin appeared normal and was similar to that of the control. The predominant abnormality (as revealed by elastic tissue stains) is a localized and roughly complete loss of elastic tissue in the papilary, and/or in the reticular dermis (1, 5). Fitz et al. (3) proposed to differentiate anetoderma from other disorders of elastic tissue by categorizing elevated lesions (secondary anetoderma, acne scars, keloids, nevus lipomatosus superficialis, papular elastorrhexis, and connective tissue nevi) and depressed lesions (secondary anetoderma, glucocorticoid-induced atrophy, and acne scars).

No effective treatment is available for anetoderma. Treatment should be focused on the underlying disease or infections (2, 4). Appropriate treatment of inflammatory underlying conditions, such as topical medication with epsilon-aminocaproic acid (an antifibrinolytic) and/or systemic administration (aspirin, dapsone, phenytoin, penicillin G, vitamin E, vitamin C, inositol niacinate, and oral colchicine) might prevent new lesions (2, 13). Surgical excision may be useful for limited lesions that are cosmetically objectionable. Ablative and non-ablative fractionated lasers have shown some improvement in limited cases (1, 3). From observations, anetoderma remains consistent throughout life, and new lesions often continue to progress for years (2, 4). The presence or absence of clinical inflammation at the onset of the disease is not related to prognosis (1).

In summary, we presented the first reported case of primary anetoderma in a southeast Asian female with the onset during infancy but with no family history of the disease. The location of rare facial lesions later disappeared and re-appeared on the lower body as the patient grew. Future studies may include the follow-up of the patient for further disease progression, as well as further investigation of the prevalence of this disease in this population.

Copyright © 2020, Journal of Skin and Stem Cell. This is an open-access article distributed under the terms of the Creative Commons Attribution-NonCommercial 4.0 International License (http://creativecommons.org/licenses/by-nc/4.0/) which permits copy and redistribute the material just in noncommercial usages, provided the original work is properly cited.
download pdf 6.75 MB Peer Review Comments ( 421.69 KB) Get Permission (article level) Import into EndNote Import into BibTex
Number of Comments: 0