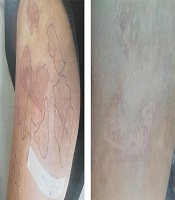 Becker’s Nevus in a 24-Year-Old Female Patient with Rheumatoid Arthritis: A Case Report of a Laser Therapy Without Recurrence

Becker’s nevus is a type of cutaneous hamartoma that occurs as a brown hyperpigmented patch with irregular borders. The exact pathogenesis of Becker’s nevus is not clear, but hormonal disturbances might play a triggering role. Q-switched lasers have demonstrated favorable effects on improving hyperpigmentation lesions; however, following using a Q-switched laser, the nevus usually reoccurs.

In this study, we described a 24-year-old female patient with Becker’s nevus treated with Q-switched ruby laser (694 nm) whose lesion recovered without any complications or recurrence. The patient had rheumatoid arthritis and has been taking oral methotrexate, hydroxychloroquine, and prednisolone for ten years.

Although hyperpigmentation has reported following laser therapy, our patient did not develop any pigmentation, and the lesion did not recur, which can be due to her concurrent drugs, suggesting the role of the immune system in recurrence of Backer’s nevus.

Becker’s nevus is a kind of cutaneous hamartoma that appears as a brown hyperpigmented patch with irregular borders (1). The exact etiology of Becker’s nevus has not yet fully understood. However, due to its higher prevalence in the male gender and the presence of hypertrichosis and acneiform lesions, androgenic disturbances might play a triggering role. Besides, a post-zygomatic autosomal mutation may also be another cause of Becker’s nevus, which is still debatable. Lasers, along with other methods, such as electrolysis and drug therapy (e.g., Flutamide or Malassezin), have been regarded as treatment modalities for these lesions (2). Q-switched lasers have demonstrated promising effects in improving hyperpigmentation lesions. However, usually following the use of a Q-switched laser, the nevus reoccurs, causing the patient to feel anxious and stressed (3). In this study, we described a 24-year-old patient treated for rheumatoid arthritis (RA) presented with Becker’s nevus, followed by treating with Q-switched ruby laser (694 nm). Ultimately, her lesion recovered without any complications or recurrence. Although Becker’s nevus, similar to several other skin lesions and disorders, has been known for many years, limited information is available about it, which can be due to its low incidence. The only study on Becker’s nevus In Iran was conducted by Rasi et al. (3), in which they examined 22,600 patients in the outpatient dermatology department in Hazrat-e Rasool Hospital, Tehran, Iran, from July 2003 to July 2010, and reported a prevalence of 0.2% among studied cases. Due to the rare nature of this lesion and its simultaneous occurrence with RA and immunosuppressive treatment (in relevance with our case) and also various reports of the lesion’s characteristics and outcomes following different treatments for patients, our report may help for a new combination treatment for this lesion.

The patient was a 24-year-old woman referring to the dermatology clinic of Al-Zahra Hospital, Isfahan, Iran, in January 2018 with the complaint of an irregular color change on her buttock area. The lesion developed when she was 13 years old on her right buttock and had enlarged over time so that at the time of her referral, its size was approximately 10 × 10 cm. (Figure 1). She had not received any diagnostic or therapeutic actions for her lesion. Also, there was no sign of itching, bleeding, and scaling. Moreover, the patient had been diagnosed with RA at the age of 14 and has been taking oral methotrexate 7.5 mg/week, oral hydroxychloroquine 200 mg/day, and oral prednisolone 5 mg/day. After obtaining the patient’s history and performing a complete physical examination, she was diagnosed with Becker’s nevus by a dermatologist. This diagnosis was re-confirmed after a re-evaluation by another dermatologist. Further evaluations revealed no favorable findings to support the diagnosis of other diseases. Next, Q-switched ruby laser therapy (694 nm, 25 - 40 nsec, energy: 5 J, spot size: 3 mm × 3 mm) was used to treat the nevus. The lesion improved but not entirely disappeared after four sessions of laser therapy. (Figure 2) Also, during the 18-month follow-up of the patient, the nevus did not recur, and sustained relative recovery of the nevus was achieved. A few studies have reported abnormalities along with Becker’s nevus in some patients. There are cases of breast hypoplasia, pectoralis major aplasia, hypoplasia of right leg, defects in the maxilla, and adipose tissue simultaneously with the presence of Becker’s nevus. The observation of these abnormalities, together with Becker’s nevus (which can have an ectodermal origin), suggest that the lesion be a part of an epidermal nevus syndrome called Becker’s nevus syndrome (4). These cases indicate the importance of the clinical and laboratory investigations and precise follow-up in identifying associated abnormalities in each patient with this lesion. After examining the patient for the presence of the mentioned abnormalities, we found no suspicious findings. Previous studies have not reported an association between RA and this lesion. Besides, although RA and the lesion co-existed in this patient, the development of RA was apparently after the development of the lesion; therefore, it is unlikely that this presentation can be interpreted as Becker’s nevus syndrome. Another remarkable factor is that the patient had been treating with prednisolone, methotrexate, and hydroxychloroquine for a long period for RA. Various reports have described the effects of these drugs on skin pigmentation. A study in 2016 reported that although topical corticosteroids might result in hypopigmentation due to potential melanocyte dysfunction, topical or oral use of corticosteroids, such as prednisolone, was effective in improving the pigmentation of patients with vitiligo (5). Another study revealed the development of hyperpigmentation in the skin of some patients taking methotrexate (6). Also, Chloroquine has a high affinity for melanin and potentially could increase the photosensitivity and phototoxicity; therefore, it could impair melanogenesis (7). A case-control study in 2013 reported the prevalence of hydroxychloroquine-induced hyperpigmentation up to 7% (8). On the other hand, previous studies have suggested intermittent maintenance laser therapy, due to a high chance of recurrence, especially in the sun-exposed areas (9). Moreover, transient hyperpigmentation following laser was reported in another study (10). Notably, the compelling point about this case was that not only she did not develop hyperpigmentation, but also after laser therapy, recovery was evident in the nevus, and recurrence did not occur.

The significant role of these drugs in the effectiveness of treatment cannot be verified by the previous pieces of evidence presented in this report. Nevertheless, given that immune cells, such as dermal melanophage may be present in the lesion, a correlation between the immune system alteration and the exacerbation of this lesion may exist (11); therefore, the immune deficiency caused by these immunosuppressive drugs can contribute to the healing of the lesion and the favorable response to laser therapy (without any recurrence). Iyidal et al. (12) described a patient who had both vitiligo and Becker’s nevus at the same time; however, Becker’s nevus had developed ten years after the onset of vitiligo. Although it cannot be justified scientifically, the effects of cytokines released by CD8+ T lymphocytes may have been a possible cause of this observation. According to these observations, as well as considering our patient’s status, it can be concluded that immune system involvement may be useful in the occurrence of such a lesion. If such a connection exists, it may be effective to suppress the immune system for the treatment of these patients. However, this justification for choosing treatment is not yet decisive, and extensive studies with large sample sizes are needed to prove these theories.

The authors are thankful to the staff of the Department of Dermatology, Isfahan University of Medical Sciences, for their cooperation.

Copyright © 2019, Journal of Skin and Stem Cell. This is an open-access article distributed under the terms of the Creative Commons Attribution-NonCommercial 4.0 International License (http://creativecommons.org/licenses/by-nc/4.0/) which permits copy and redistribute the material just in noncommercial usages, provided the original work is properly cited.
2020-11-19 01:23:12
i have been diagnosed via biopsy with beckers nevus on left thigh-large light brown hairy spot with irregular borders.dermatologist told me there is no cure but i do not believe him completely.laser may work to at least lighten area.