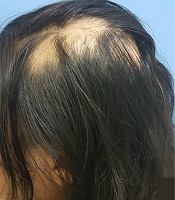 Alopecia areata (AA) is a chronic, recurrent, and non-scarring condition resulting in hair loss, which may affect all hair-bearing areas. There are three clinical patterns: patch AA, alopecia totalis, and alopecia universalis. Patients may show spontaneous recovery or respond well to treatment, but the disease may follow a course of relapse.

We report a case of recurrent alopecia totalis following successful treatment six years prior to the current visit. A 19-year-old female of Asian descent was admitted to our clinic due to recurrent hair loss in the last three months. Six years prior, she was diagnosed with alopecia totalis. After four years in remission, she started to have patchy hair loss. Dermatological examination revealed six nummular well-defined alopecia patches all over her parietal, temporal, and occipital scalp. She was treated with triamcinolone injection and light-emitting diode (LED). Additionally, topical minoxidil and hydrocortisone butyrate scalp solution were applied daily. Oral Inosine pranobex was administered twice a week. One year after the first re-administration of the therapy, complete remission was achieved.

Relapse in AA is common. Patients should be informed during education and counseling. Long term follow-up is essential in managing patients with AA.

Alopecia areata (AA) is a common type of alopecia and the second most frequent non-scarring alopecia following male and female pattern alopecia (1). Alopecia areata is chronic, recurrent and non-scarring hair loss that may affect all hair-bearing areas (2, 3). There are three clinical patterns of AA, which falls on a clinical spectrum: a small patchy bald lesion (patchy AA) that can progress to a total loss of scalp hair (alopecia totalis) and total loss of body hair (alopecia Universalis) (1, 3).

Numerous hypotheses on the etiology of alopecia areata have been proposed, including infection, trophoneurotic hypothesis (emotional/physical stress and/or trauma), intoxication, thyroid disease, and hormonal changes (1). In 2001, Madani et al. emphasized that genetic and immunological factors are the main factors as the peribulbar lymphocytic infiltration were proven; however, emotional and physical stress, as well as infection might precipitate AA (2). Essentially, AA is an autoimmune disease with an unpredictable onset and progression. Spontaneous hair regrowth is estimated to occur in 80% of patients within a year after the incidence of alopecia, but relapse can occur at any stage (4).

Unfortunately, alopecia areata is not easily managed medically (5). To date, there is no FDA-approved treatment for AA. There are a range of topical, intralesional, and oral therapeutic options; but they neither are curative nor preventive. Patients may show spontaneous recovery or respond well to treatment, but the disease may follow a course of relapse (6). Below, we report a case of recurrent alopecia totalis following a successful treatment six years prior to the patient’s current visit.

A healthy 19-year-old Indonesian female visited our dermatology clinic with a chief complaint of patchy hair loss in the last three months. Six years prior, she was diagnosed with alopecia totalis in our clinic (Figure 1A and 1C). Laboratory findings revealed a high titer of anti-cytomegalovirus and anti-rubella IgG. Six years ago, a 4-mm punch skin biopsy was performed on the scalp and showed notable perifollicular and perivascular lymphohistiocytic infiltrate.

Prior to attending our clinic, the patient had visited several additional doctors. In the course of her treatment at our clinic, we administered topical minoxidil, with the addition of triamcinolone acetonide injection once in a two weeks, oral valacyclovir, oral inosine pranobex, and light-emitting diode (LED) therapy. None of which were previously prescribed to the patient. After four months, the patient began to show a satisfying regrowth response. In a two-year follow-up appointment, the treatment response was satisfying with complete hair regrowth (Figure 1B and 1D). Unfortunately, after four years in remission, she started to have patchy hair loss. In the past three months, she reported that the amount of hair loss was becoming worse.

The patient was re-treated with triamcinolone injection, oral inosine pranobex, topical minoxidil, hydrocortisone butyrate scalp solution and LED. Triamcinolone injection and LED were administered once every two weeks period. Topical minoxidil and hydrocortisone butyrate scalp solution were applied daily. Oral Inosine pranobex was administered twice per week. After one month of treatment, the patient showed marked improvement in the number of daily hair shedding and the size of alopecia patches. The bald lesions completely regressed after seven months of therapy, although the hair density in the previously bald area was still less compared to the normal area (Figure 3A - 3C). One year after the first re-administration of the therapy, complete remission was achieved. 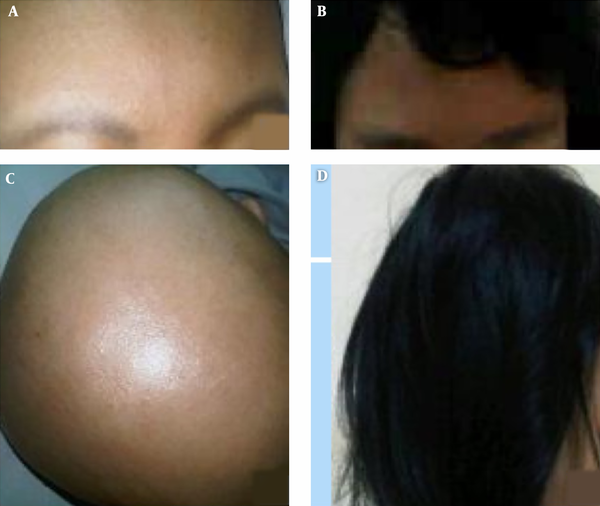 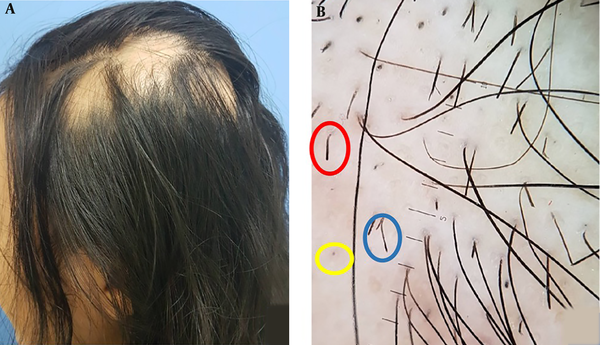 Diagnosis of AA is established through the nature of the disease, clinical and trichoscopic findings. Trichoscopy is a useful diagnostic tool for diagnosing and monitoring both hair and scalp diseases. The trichoscopic features in alopecia areata include: yellow dots, black dots, exclamation mark hairs, tapered hairs, broken hairs, short vellus hair, and upright re-growing hair (2). In this current case study, we found black dots, exclamation mark hairs, and upright re-growing hairs, which have a mean prevalence of 53%, 39%, and 23%, respectively. The patient experienced recurrent patchy hair loss after a four-year period of remission. Intralesional triamcinolone and topical minoxidil were chosen as first-line therapies (1). Light emitting diode therapy was also administered every two weeks, as the efficacy of this therapy has been proven. Two studies from Lanzafame et al. found that LED treatment significantly improved hair regrowth in both men and women with alopecia (7, 8). The usage of LED therapy is deemed safe and is FDA-approved (9).

The patient in this case presented 6 years prior with alopecia totalis. She had several attributes for poor prognosis including extensive hair loss (alopecia totalis), early onset, onset duration was more than 1 year, and resistance to standard therapy for alopecia (10). In the course of treatment we added inosine pranobex, since the etiopathogenesis of AA is immune-related (3, 11). Inosine pranobex, commonly known as isoprinosine or methisoprinol, is an immunomodulatory agent that has been studied as a potentiator of T-cell lymphocytes and phagocytic cell function. Several studies have found it beneficial in alopecia areata treatment; since defective cell mediated immunity is suggested to play a critical role in alopecia areata (12). In a double-blind, randomized controlled trial investigating the single treatment of inosine pranobex in recalcitrant alopecia androgenetic, conducted by Georgala et al., showed that in the treatment group 5 (33.3%) patients had full remission, 8 (53.3%) responded partially and 2 (13.3%) did not respond at all; meanwhile, in the control group 4 (28.5%) patients responded partially and 10 (71.4%) did not respond. This study found that the therapeutic effect was statistically significant (χ2 = 7.82, P < 0.01) (10). Another study by Galbraith et al. followed patients with AA for a period of 1 year, in which 17 patients received inosine pranobex therapy, and only 8 were responsive. The patients who responded to the treatment also showed significant T-cell enhancement in their skin biopsy results (13). Lowy et al. studied 20 patients with AA, including alopecia totalis, 14 of whom were treated with inosine pranobex. In total, nine patients responded to the treatment. Of those, seven patients were reported to have previously had autoantibodies, which then lessened after treatment (14). Although the second occurrence of AA also responded well to therapy, in this disorder, relapse is unpredictable (2, 3, 6). In addition to other symptoms, the rapid onset of hair loss and disfigurement associated with AA may cause anxiety and psychological stress for patients. Therefore, education and counseling play an important role in managing AA (4). Since the course of relapse is unpredictable, it is essential to conduct long-term follow-up to manage and evaluate the progression of AA.

Given that we administered multiple treatments in this case study, it is impossible to single out the performance of each individually. However, we believe that the addition of inosine pranobex, intralesional steroid injection, and valacyclovir were what chiefly led to the patient’s clinical improvement despite the poor prognostic factors.

Copyright © 2020, Journal of Skin and Stem Cell. This is an open-access article distributed under the terms of the Creative Commons Attribution-NonCommercial 4.0 International License (http://creativecommons.org/licenses/by-nc/4.0/) which permits copy and redistribute the material just in noncommercial usages, provided the original work is properly cited.
2020-12-25 19:19:13
I had alopecia areata when I was a kid but got treated via steroid injections but 2017 October it came back and now its so worse since I have Alopecia universal.It has been so hard for me and any help or advise from you will be very much appreciated.