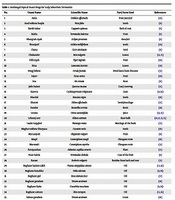 Seborrheic dermatitis (SD) is a common disorder of the skin, which is dermatologically manifested by erythematous patches covered by yellow-grey scales. It mostly appears on the face, scalp, upper chest, and back. Half of the adult population is estimated to be affected by seborrheic dermatitis of the scalp. Although its prevalence is very high, the etiology has not been very well known. Numerous intrinsic and external environmental factors such as excessive sebum secretions, fungal colonization of the surface of the skin, genetic susceptibility, and dynamics, among others, can result in the development of the disease. Unani medicine is familiar with this disease under the entity named ‘Tasherul Raas/Huzaz’. Various herbal and mineral-origin drugs have been declared in the Unani classical literature for the treatment of SD. In the present paper, topical Unani drugs particularly beneficial for scalp seborrheic dermatitis are discussed.

Seborrheic dermatitis (SD) is a frequent dermatological complaint that affects the body's seborrheic areas. The disease has an impact on the scalp, forehead, neck, face, retro-auricular region, and upper chest, causing peeling, flaking, scaling, swelling, itchiness, and peripheral erythema. Scalp flaking in SD is normally white to yellowish and can be sticky, greasy, or dry (1).

It is approximated that 50 to 70% of the population is affected by SD. Although the prevalence of SD is high, the actual cause of the skin condition is still not fully understood (2). The symptoms are partially managed by available treatments, but they cannot cure the disease. The SD pathogenesis is generally caused by a combination of three main factors: Function of the sebaceous gland, presence, and proliferation of Malassezia furfur yeast (Pityrosporum ovale) on the skin, and personal immunological reaction to the yeast. Reducing the counts of Malassezia with antifungal drugs is successful in eradicating SDSD (3).

Scalp SD control treatments are classified into three main groups according to their mode of action: Antifungal drugs, flake-removing drugs, and anti-inflammatory drugs. Many of the commercially available medicines contain antifungal drugs that are active compounds and can be utilized for the treatment of Malassezia furfur yeasts. Zinc pyrithione and selenium sulfide are over-the-counter (OTC) products that reduce the proliferation of Malassezia furfur. Salicylic acid may cause keratolysis, and may help improve SD flaking (4-6). These OTC antifungal drugs, prescriptions based on topical steroids, and immunomodulators act as anti-inflammatory agents and improve the manifestations of SD (7).

Unani medicine is one of the oldest traditional medicines been used to treat various diseases and ailments under the concept of the theory of humor and temperament laid down by the Father of medicine “Hippocrates/Buqrat” (8). In Unani medicine, SD is mentioned under the entity of ‘Tasherul Raas/huzaz/bafa’. According to Samrqandi (12th century) and Jalinoos (Galen), ‘huzaz’ can affect the whole body, but it usually affects the scalp. Huzaz is an Arabic word for scales and flakes of the scalp that may manifest with lesions and papules (9). Prominent Unani scholars such as Ismail Jurjani and Abu Sehal Masihi have outlined balgham maleh or fiery sauda (sauda with hiddat) as aetiological factors. Anaemia, constipation, and general weakness have been also stated to predispose the condition (9).

Unani medicine has immense potentials in treating various scalp conditions. Various topical and oral formulations are available for treatment and cosmetic purposes. The prime benefit of using Unani medicine in SD is the multiple pharmacological actions of a single drug such as antifungal, anti-inflammatory, scalp cleansing, etc., which are most suitable for SD.

However, no sufficient high-quality evidence is available regarding the use of plant-based formulations for the management of SD. Few traditional and plant-based oils, shampoos, and powders that contain antifungal compounds have been substantiated to be beneficial and effective in the management of SD. Table 1 presents a list of topical Unani drugs used for centuries for seborrheic dermatitis of the scalp.

Seborrheic dermatitis is a dermatological manifestation of the development of flakes and scales, which are greasy and easily detachable, and erythematous patches along with pruritis. Although it can be found in various anatomical sites, it appears to occur in areas containing multiple sebaceous glands, such as the scalp, neck, forehead, face, upper chest, and back. Scalp seborrheic dermatitis usually occurs as a milder eruption in the form of dandruff that is distinguished by smaller rough flakes. Various modes of treatment have been utilized and found effective in seborrheic dermatitis. The mode of action of most treatments involves the inhibition of colonization of skin yeast, mitigation of itching and erythema, softening of crusts and scales, and relief of erythema and inflammation. Such drugs are made of antifungal drugs, topical corticosteroids, keratolytics, and immunomodulators. Some of these medicines, however, benefit from multiple properties, such as the intrinsic anti-inflammatory properties of many antifungal drugs and keratolytic properties of zinc, selenium, and tar preparations.

Topical corticosteroid and antifungal agents are utilized as first-line medical therapies in many patients but the lesion can be worsened by an allergic reaction to the ointment. In addition, the use of topical corticosteroids (including mid-potency and low-power agents) for SD may be restricted by the prolonged treatment side effects and the frequent finding of early recurrence after discontinuation. However, due to the side effects of the medications and the chronicity and relapse of seborrheic dermatitis, alternative methods such as Unani medicine can be utilized for therapeutic and preventive aspects. Single Unani drugs such as amla, baekh kabar, balela, bhangrah siyah, hina, irsa, jufte baloot, khatmi, leemu, lehsun/seer, marzanjosh, parsiyaoshan, roghane badam talkh, roghane gundum, roghane zaitoon, sibr/aelwa, sirka, hulba, tukhme soosan, turmus, ushq, zarawand mudaharij, etc. are used more or less in combination forms for the treatment of seborrheic dermatitis. Many of these Unani drugs have substantiated their antifungal, anti-inflammatory, and antidandruff properties in various studies, which make them more suitable to be used for seborrheic dermatitis. However, many of them are left to be studied to gain evidence on their efficacy.

Copyright © 2020, Journal of Skin and Stem Cell. This is an open-access article distributed under the terms of the Creative Commons Attribution-NonCommercial 4.0 International License (http://creativecommons.org/licenses/by-nc/4.0/) which permits copy and redistribute the material just in noncommercial usages, provided the original work is properly cited.
download pdf 88.09 KB Peer Review Comments ( 85.81 KB) Get Permission (article level) Import into EndNote Import into BibTex
Number of Comments: 0