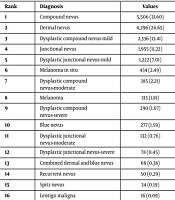 Analysis of the Most Commonly Encountered Diagnoses in Academic Dermatopathology

The number of skin biopsies has increased over the last three decades, but benchmarks based on the number of biopsies required to capture skin cancers are lacking. To determine the most common dermatopathology diagnoses, reports of all 85,785 dermatopathology specimens examined in the Department of Dermatology at the University of Florida from January 2017 to December 2017 were reviewed. 78,353 non-excisional specimens were evaluated for diagnosis. 7,432 excisional specimens consisting of basal cell carcinoma (BCC), squamous cell carcinoma (SCC), melanoma, and dysplastic nevi were evaluated for residual tumor and marginal status. The fifteen most common diagnoses accounted for 84% of all biopsies, and an additional 30 entities accounted for 12% of all biopsies. The remaining 4% of cases were composed of only 206 diagnoses. This pattern reflects current dermatology practice in the United States, wherein the 20 most commonly encountered diseases account for 85.4% of all diagnoses made by dermatologists. Among the total number of biopsies, 90.7% of specimens were neoplasms and 9.3% were inflammatory or infectious disorders. Uncommon (4%) and inflammatory or infectious (9.3%) disorders comprise a small minority of academic dermatopathology, with implications for resident and fellowship training.

Cutaneous biopsies are performed for a variety of reasons, most commonly to assist dermatologists in establishing or verifying a diagnosis. The number of skin biopsies performed in the last decade has increased rapidly (1, 2). It is unclear whether this reflects an increase in incidence of clinically atypical neoplasms, patient awareness and detection, or changes in practice habits.

Academic institutions frequently serve as referral centers for complex and rare entities in dermatopathology, as consultation in this subspecialty is supported by niche expertise, access to obscure immunohistochemical stains and molecular tools, consensus, and additional medicolegal protection. However, analysis of the most common diagnoses and variety of diagnoses encountered in academic dermatopathology overall are lacking in the literature.

Dermatopathology represents a significant portion of dermatology residency training, with specific guidelines for instruction set forth by the Accreditation Council for Graduate Medical Education (ACGME), including board certification for instructors and Milestones® evaluations for learners (3). In clinical dermatology, optimal training is achieved with a combination of didactic and clinical instruction; the latter includes evaluation and management of patients with a wide variety of common and uncommon cutaneous diagnoses. In current models of academic dermatology, high-volume clinics form the basis for clinical instruction. Learners in dermatopathology similarly benefit high-volume caseloads which support both heuristic and analytic diagnosis. However, dermatopathology caseloads in many academic institutions have progressively diminished over the last decade, in part due to a shift in volume to large private and corporate laboratories (4-7).

It remains unclear how many biopsy specimens residents in dermatology and fellows in dermatopathology should evaluate for sufficient clinical exposure to a wide range of common and rare diagnoses prior to independent practice.

Representing 85,785 specimens, all consecutive dermatopathology reports from the Department of Dermatology at the University of Florida College of Medicine, over a period of 12 months (January 1, 2017 to December 31, 2017, inclusive), were individually reviewed. Diagnoses for non-excisional cases were counted and reported as percentages of the overall caseload and ranked in order of frequency (Table 1). From this data, all melanocytic neoplasms reported were separately stratified and ranked in order of frequency (Table 2).

In the 2017 calendar year, 56,713 dermatopathology cases were reported by three coauthors of this manuscript. The total number of specimens was 85,785, averaging 1.51 specimens per case. Approximately 14% of these cases represented intradepartmental or institutional referrals. In contrast, 86% of cases were referrals from board-certified dermatologists and mid-level physician extenders employed in a variety of practice settings in the state of Florida: private group or solo practice, corporate practice, and hospital-based practice. Non-excisional biopsy specimens for initial review totaled 77,570 specimens (90.4%). Of all biopsies, 7,432 (8.7%) represented excisional specimens of previously biopsied melanomas, BCCs, cSCCs or dysplastic nevi. The remaining 783 (0.9%) specimens were consultations of previously reviewed biopsies referred for a second opinion. Of these specimens, 92% were melanocytic lesions, 6% represented non melanocytic tumors, and lastly 2% were inflammatory processes.

The 15 most frequently reported diagnoses accounted for 65,195 (84 percent) of all biopsies referred for initial review, and an additional 30 diagnoses (Table 1) accounted for 9,343 (12%) of this subset. The remaining 210 diagnoses accounted for only 2,592 (4%) of this group and reflected 440 neoplastic and 2,192 inflammatory or infectious entities. The three most common diagnoses overall were seborrheic keratosis (14.3%) followed by basal cell carcinoma (12.6%) and squamous cell carcinoma (10.5%). However, if combined into a single diagnostic grouping, benign melanocytic nevi (junctional, compound, and dermal nevi) would represent the most common entity, accounting for 15.1% all specimens. Among the total number of biopsy specimens referred for initial review, 90.7% represented neoplastic diagnoses, and 9.3% represented inflammatory or infectious entities.

The number of skin biopsies performed has progressively increased over the last thirty years. Based on the data reflecting Medicare beneficiaries from 1986 to 2001, the number of skin biopsies increased by approximately 10% per year (8). While this trend is ongoing, this rate has slowed slightly in the first decade of this century to approximately 6% per year (1, 2).

Dermatopathology, unlike any other subspecialty of pathology, encompasses over 500 different diagnostic entities (11, 12). Despite this wide variety, several diagnostic entities are frequently encountered, while many others are rarely seen. In this study, 45 diagnoses accounted for an astounding 96% of all biopsies, and 15 of these diagnoses accounted for 84% of all biopsies. The remaining 4% of cases were composed of 206 diagnoses, and 250 established diagnoses were not encountered in the calendar year of study. This pattern reflects current dermatology practice in the United States, wherein the 20 most commonly encountered diseases account for 85.4% of all diagnoses made by dermatologists (9).

Although instant recognition of “bread and butter” cases is a necessity that dermatopathology fellows must train to identify when signing out a large volume of cases, ensuring that a systematic approach to diagnosis and recognition of tissue reaction patterns during training may be lost or over-looked due to the repetitive nature of the majority of cases. Additionally, for Dermatology trained dermatopathology fellows, prior familiarity and experience with molecular pathology testing and its relevance to fellowship training is lacking with reportedly about half of dermatopathology fellows not receiving adequate instruction per their fellowship directors (16).

A limited number of dermatopathology diagnoses, with a heavy predominance of neoplasms, is seen in practice, with 45 diagnoses accounting for 96% of biopsy specimens examined, consistent with current dermatology practice in the United States. As a diagnostic group, melanocytic nevi (including dysplastic nevi) represent the most common reason for biopsy, followed by seborrheic keratosis, basal cell carcinoma, and squamous cell carcinoma. The required minimum number of reviewed specimens in ACGME-accredited dermatopathology fellowships may be reconsidered, given that a large number of established but uncommon, inflammatory, and infectious disorders comprise less than 4% of a large academic dermatopathology sample. Consideration of a national digital slide share program between ACGME accredited dermatopathology departments can serve to distribute unusual cases between institutions and facilitate educating fellows in recognition of an uncommon diagnosis. Additionally, preservation of high volume within academic institutions is essential for education of dermatopathology fellows and dermatology residents. Limitations of this study include its single institution-based sample, which may limit is generalizability.

Copyright © 2020, Journal of Skin and Stem Cell. This is an open-access article distributed under the terms of the Creative Commons Attribution-NonCommercial 4.0 International License (http://creativecommons.org/licenses/by-nc/4.0/) which permits copy and redistribute the material just in noncommercial usages, provided the original work is properly cited.
download pdf 105.71 KB Peer Review Comments ( 111.37 KB) Get Permission (article level) Import into EndNote Import into BibTex
Number of Comments: 0