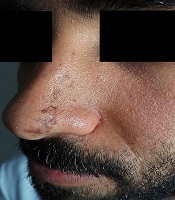 Linear atrophoderma of Moulin (LAM) is a rare dermatologic disorder characterized by hyperpigmented atrophic plaques following the Blaschko lines (BL). The trunk and limbs are the usual sites affected. Isolated facial involvement is an exceedingly rare entity. Despite a comprehensive medical literature search, the author could find only two cases of LAM where the lesions are exclusively localized to the face. In this article, the author presents the third case of LAM localized to face only.

A 26-year-old male complained of multiple linear non-pruritic pigmented lesions over the left side of the nose and glabellar area of six months’ duration. There was no history of erythema, thickening/hardening of skin, or violaceous border surrounding the lesions. On clinical examination, there were multiple hyperpigmented brownish lesions, the majority of which were depressed, involving the left ala and bridge of nose laterally and glabellar area in a Blaschkoid pattern. Diagnosis of LAM was established based on suggestive history and clinical examination.

LAM is a rare disorder, and the facial localization makes it exceedingly rare. It should be kept in the differential diagnosis when hyperpigmented depressed lesions are present in a Blaschkoid pattern on the face.

Linear atrophoderma of Moulin (LAM) is a rare dermatologic condition in which hyperpigmented depressed plaques are present following the Blaschko lines (BL) (1, 2). The lesions are usually present over the trunk and limbs without any tendency for long-term progression. These depressed plaques are not associated with preceding inflammation, induration, or sclerosis. Sites of predilection involve the trunk (most common) followed by limbs. Face and neck involvement has rarely been reported in the literature (3, 4). Isolated facial involvement in LAM is an exceedingly rare presentation (5). The author could find only two cases of LAM, where the lesions are restricted to the face (5). In this article, the author is presenting the third case of LAM exclusive to face.

A 26 year-old-male complained of a band of multiple linear non-pruritic pigmented lesions over the left side of the nose and glabellar area for the last six months. The lesions started near the tip of the nose on the left side and progressed upwards along the bridge of the nose laterally and reaching upwards to the level of the root of the nose (Figure 1). There was no history of erythema, thickening/hardening of skin, or a violaceous border surrounding the lesions. There was neither history of trauma to the affected side nor skin lesions prior to the complaints. The patient denied any history of similar lesions in his family members. On clinical examination, there were multiple hyperpigmented brownish macules and atrophic plaques of variable size present in a band like pattern in a Blaschkoid distribution. Lesions extended from the tip of the nose on the left side up to the level of the root of the nose involving the left ala and bridge of the nose laterally. Similar lesions were present above the glabellar area on the left side, just superior to the medial part of the left eyebrows. At several places, lesions were depressed, revealing clinical atrophy. There were no signs of inflammation and induration. The rest of the dermatological and systemic examination was unremarkable. Skin biopsy was not done, as the patient did not give consent for aesthetic reasons. Based on history and suggestive clinical examination, a diagnosis of LAM was made. 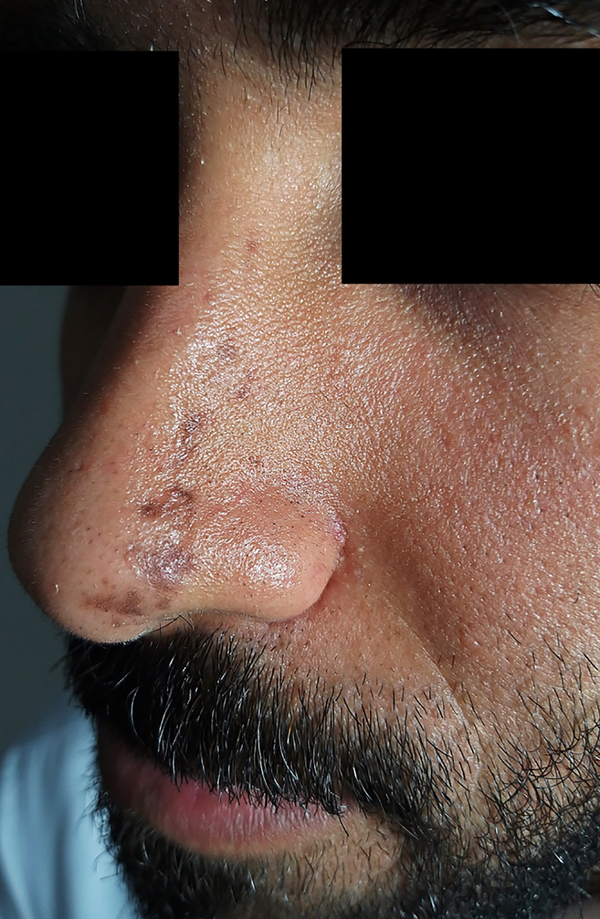 Multiple hyperpigmented atrophic lesions present in a band like pattern over left side of nose following Blaschko lines.

LAM is a rare dermatological disorder first described by Moulin et al. (6). They reported five healthy patients who complained of unilateral hyperpigmented atrophic lesions along BL on the trunk and limbs without any evidence of long term progression. These plaques had no inflammation, induration, or sclerosis associated with them (3, 6). The lesions on histopathology revealed hyperpigmentation of the basal layer, while other epidermal layers and the dermis, including collagen and elastin, were unremarkable (3, 6). The clinical atrophy was attributed to the loss of subcutaneous tissue; however, a deep skin biopsy from both the affected skin and contralateral sides was originally not performed to assess the thickness of subcutaneous tissue. Bauman et al. (7) reported a patient with a similar disease and coined the term linear atrophoderma of Moulin. However, in the last decade, the clinical and histopathological features of LAM have been widened, and several authors have described cases of LAM with varying clinical and histopathological findings not complying with the original description, as stated by Moulin et al. (1, 2).

The etiopathogenesis of LAM is not clear to date. All the reported cases of LAM have been sporadic so far. Dermatoses where the lesions are present along BL are believed to be caused by a somatic mutation taking place early in embryogenesis resulting in genotypic and phenotypic mosaicism. Some researchers have proposed that LAM could be the result of the action of an autosomal lethal gene surviving by mosaicism. The presence of two or more genetically distinct cell populations in an individual derived from a single zygote is called mosaicism. Loss of the corresponding allele (wild type) at the locus of atrophoderma can occur due to a postzygotic mutation. This causes a homozygous cell clone, which becomes clinically manifested later along Blaschko lines (8). However, no gene involvement in LAM has been reported to date.

LAM is characterized by hyperpigmented depressed plaques in a band-like distribution following the lines of Blaschko. The lesions usually affect the trunk and extremities. These plaques are not associated with preceding inflammation, induration, or sclerosis. The trunk is the most commonly affected site, followed by upper and lower limbs (3, 4). Rarely, involvement of the face/neck has been reported. There are only a few cases of LAM where facial involvement has been reported. However, in most of these, facial involvement is seen in association with the involvement of other body parts like the neck, trunk, and limbs (9-12). Despite an extensive review of medical literature, the author could find only two cases of LAM localized to the face alone (Table 1). Darung et al. (5) have reported a case of a 16-year-old girl having asymptomatic hyperpigmented depressed plaques over the left chin of six months’ duration. Similarly, Ozkur et al. (12) have described two cases of LAM from Turkey having facial lesions. However, only one of the two cases had lesions restricted to the face. In the present case, the lesions were present in a Blaschkoid distribution involving the upper face, adding more novelty to the case. Thus, the author believes that the present case represents only the third case of LAM exclusive to the face. The exceedingly rare nature of this case prompted the author to report it.

The histopathological features of LAM have been widened. In the original report by Moulin et al. (6), the characteristic finding was only basal layer hyperpigmentation of the epidermis while the rest of the epidermal layers and dermis was unremarkable. However, in the last few years, various researchers have reported new histopathological findings in LAM, which include perivascular lymphocytic infiltrates, decreased elastic tissue, epidermal atrophy, altered dermal collagen, acanthosis, dilated dermal blood vessels, dermal atrophy, and plasma cell infiltrates (13). However, histopathology was not done in the present case.

The differential diagnoses include those disorders where the hyperpigmented atrophic lesions are present along BL. Linear morphea usually has a preceding inflammatory phase, and the plaques have lilac colored rings. Induration on clinical examination and sclerosis on histopathology is the hallmark of morphea. The prognosis of morphea is less favorable and can lead to complications in contrast to LAM (4, 14). However, in the present case, there was no induration, and linear morphea involving face, i.e., linear morphea en coup de sabre is usually present above the plane of the eyebrows and rarely extends downwards and resembles typically a sabre cut (linear scar due to cut from a sword). In contrast, the progression in the present case was from nose towards forehead (in an upward direction), which is not the case with linear morphea en coup de sabre (15). Blaschkoid lichen planus can also be considered as a differential when the clinical atrophy is not appreciated. However, in this case, several lesions were having well-defined atrophy, which differentiated it from the former (16). In linear and whorled nevoid hypermelanosis, lesions appear early at birth or soon after birth, and they lack atrophy. Since the patient denied any history of preceding dermatoses, linear post-inflammatory hyperpigmentation was ruled out. Another possibility could have been idiopathic atrophoderma of Pasini and Pierini (IAPP). IAPP involving the face has rarely been reported. The lesions in IAPP are characterized by sharply defined plaques that are depressed and have abrupt borders giving a typical “cliff-drop” appearance. In addition, IAPP is rarely seen to follow Blaschko lines (17, 18).

LAM is a self-limiting disease with a better prognosis in comparison to linear morphea. No definitive treatment has been established for LAM. Progression of the lesions usually halts within a few months without involving internal organ systems (19). Several treatments have been tried for LAM with variable results. Such treatments include topical corticosteroids and heparin, intravenous penicillin, weekly methotrexate (20 mg/week), oral potassium aminobenzoate, high-dose vitamin E (400 IU/day) in collaboration with topical clobetasol propionate, phototherapy, and a combination of penicillin and PUVA. Since, the problem is mainly aesthetic, self-tanning cream leading to homogenization of the skin pigmentation has been tried by some researchers (20, 21).

Copyright © 2020, Journal of Skin and Stem Cell. This is an open-access article distributed under the terms of the Creative Commons Attribution-NonCommercial 4.0 International License (http://creativecommons.org/licenses/by-nc/4.0/) which permits copy and redistribute the material just in noncommercial usages, provided the original work is properly cited.
download pdf 2.70 MB Peer Review Comments ( 127.68 KB) Get Permission (article level) Import into EndNote Import into BibTex
Number of Comments: 0