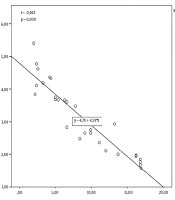 Correlation Between Erythrocyte Glutathione Levels and Severity of Melasma

Melasma is a common acquired disorder of hyperpigmentation, characterized classically by the presence of symmetrical, light-to-dark, muddy-brown macules with borders on the face, especially the forehead, cheeks, upper lip, chin, and nose. Knowledge of an increase in free radicals and decreased antioxidants in patients with melasma led to the belief that oxidative stress is involved in the pathogenesis of melasma. Glutathione (GSH) is an antioxidant that can be used as a parameter to assess the antioxidant-free radical activity in the pathogenesis of melasma.

The study aimed to determine the correlation between erythrocyte glutathione levels and the severity of melasma.

A case series study was done from May to July 2018 in the Outpatient Clinic of Dermatology and Venereology Department, Dr. Mohammad Hoesin General Hospital Palembang. Thirty female patients met the inclusion criteria. The independent variable was the erythrocyte glutathione level, and the dependent variable was the melasma severity. The diagnosis was established based on clinical examinations, and the severity was determined by the modified Melasma Area Severity Index (mMASI) score. The correlation between variables was analyzed using Spearman Rho’s test (P < 0.05). The data analysis was done with SPSS version 20.0 (SPSS, Inc Chicago, Illinois).

There was a very strong negative correlation between erythrocyte glutathione levels and melasma severity.

Melasma is a skin hypermelanosis disorder caused by melanogenesis dysfunction (1, 2). The lesions are circumscribed, symmetrical brownish macules, or patches with irregular edges. It typically occurs on sun-exposed areas, especially the face (1-4). In the Southeast Asia regions, melasma accounts for 2.5% - 4% of patients seen in dermatology clinics (5).

Melasma is more commonly observed in women of reproductive age (2, 3). The severity of melasma can be assessed using the modified Melasma Area Severity Index (mMASI) (6). The mMASI scoring system was validated in 2017 and is a reliable tool to assess the severity of melasma (7). Melasma more frequently affects women. Although generally not harmful, melasma can cause significant emotional impacts on patients, such as feeling bothered, frustrated, embarrassed, and depressed about their skin appearance. The disease also causes them to feel unattractive. Therefore, it is important to properly diagnose and treat the disease to minimize the burden on the quality of life (8).

Ultraviolet radiation is generally believed to be the main precipitating factor for melasma, which is indicated by the location of the lesions that are most common in sun-exposed areas (9). Chronic exposure to UV radiation increases the production of Reactive Oxygen Species (ROS) and oxidative stress (10, 11). The amount of oxidative stress can be assessed through the measurement of molecular biomarkers, one of which is blood glutathione levels (12).

Glutathione also has anti-melanogenic effects through the inhibition of the tyrosine enzyme and convert of the eumelanin to pheomelanin (13). The predominant form of glutathione in the blood is GSH, and it is mostly found inside erythrocytes (14). The erythrocyte GSH level can be used as a valid oxidative stress biomarker (15).

This study aimed to determine the correlation between erythrocyte glutathione levels and the severity of melasma.

A case series study was done from May to July 2018 in the Outpatient Clinic of Dermatology and Venereology Department, Dr. Mohammad Hoesin General Hospital Palembang. During the study period, 30 female patients met the inclusion criteria. The study protocol was approved by the Ethics Committee, Faculty of Medicine, Sriwijaya University.

The study used a consecutive sampling method, with a sample of melasma patients visiting the outpatient clinic during the study period. The severity of melasma was assessed based on the mMASI score. The assessment was done by researchers and supervised by board-certified dermato-venereologists.

The frequency and distribution of data were analyzed with univariate analysis and presented in the form of tables and graphs. The correlation between erythrocyte glutathione levels and the severity of melasma was tested using Spearman Rho’s test. The data analysis was performed using SPSS version 22.0.

This study included 30 female patients with melasma who visited the Dermatology and Venereology DV clinic during the study period from May to July 2018.

The mean mMASI score was 8.72 ± 5.14, with a range of 2.0 to 16.9. The distribution of melasma severity was mild (46.7%), moderate (33.3%), and severe (20%). The most frequently encountered melasma pattern was centrofacial (56.7%), mostly distributed in the epidermal type (40%). All study participants did not report sunscreen use, and 60% of respondents had a family history of melasma. Data on the distribution of clinical characteristics are shown in Table 2.

There was a negative correlation between GSH levels and age (r = -0.331; P = 0.074; n = 30). However, the correlation did not reach statistical significance. The analysis showed that older participants were found to have lower GSH levels, but the difference was not statistically significant. The R2 value of 0.099 indicated that age explained 9.9% of the variance in the GSH levels (Figure 1). 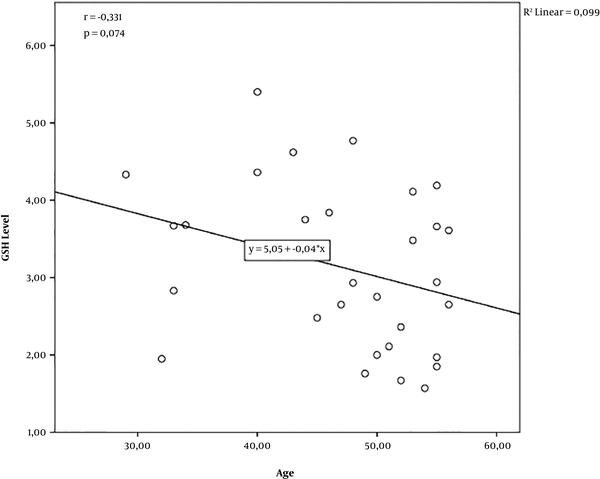 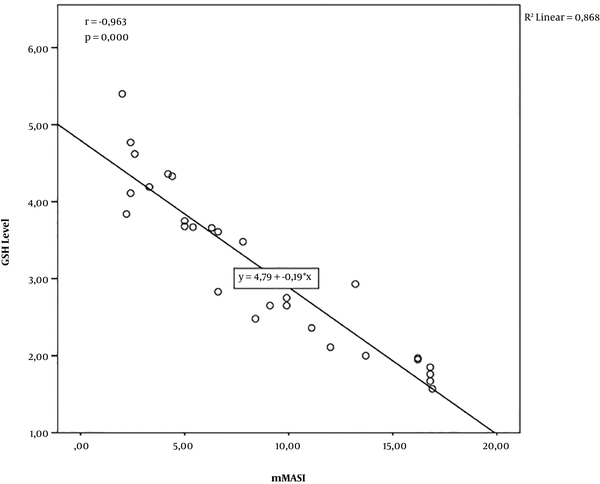 The greater female ratio in melasma patients is explained by the influence of female sex hormones (estrogen and/or progesterone) in the pathogenesis of melasma. Several studies report that estrogen increases the expression of Trp-1, Trp-2, and tyrosinase activity in human melanocyte culture. Estrogen has shown to increase melanin synthesis in healthy human melanocytes by activating the cAMP protein kinase (PKA) pathway and upregulation of tyrosinase expression and Microopthalmiaassociated Transcription Factor (MITF) (19).

In this study, the type of melasma was assessed with a Wood lamp examination (UV light wavelength 340 - 400 nm) and dermoscopic examination. The Wood lamp determines the type of melasma by assessing the depth of melanin deposits in the skin (24). The most frequent type of melasma was the epidermal type (43.3%), which was in line with Zainuddin et al.’s study (78.6%) (21). A cross-sectional study in 2016 by Jagannathan et al. on 100 melasma patients in India also found the same results (47%) (24). On theory, during a dermoscopic examination, the epidermal type shows an image of regular brown pigment tissue. The dermal type shows irregular color pigments and blue-gray color. In mixed-type melasma, there are both features of the epidermal and dermal types (24).

From this study, it can be concluded that there is an inverse relationship between erythrocyte glutathione levels and the severity of melasma in melasma patients. The lower the erythrocyte glutathione level, the more the patient’s melasma severity. Since the decrease in glutathione levels can be caused by oxidative stress, it can also be concluded that an increase in oxidative stress would aggravate the severity of melasma. This is also supported by a study by Seckin et al., which found that oxidative stress, which was proven by the disrupted balance between oxidants and antioxidants, was significantly correlated with the incidence of melasma (10) However, the study did not compare the degrees of the disease.

A decrease in glutathione can cause increased hydroxylation of tyrosinase to dopaquinone, decreased speed of reaction of dopaquinone with thiol, and decreased level of thiol-dopa conjugates. These reactions cause dopaquinone to release and increase the synthesis of eumelanin in the process of melanogenesis. A reduction in glutathione also results in the accumulation of H2O2, which causes lipid peroxidation, increases tyrosinase activity, and further stimulates the melanin synthesis process (13). On the other hand, glutathione, as a strong antioxidant, is used for the treatment of melasma because of its antimelanogenic properties. The most popular routes of administration are oral, topical, and intravenous, which may be initiated for 10 weeks. Some adverse effects of glutathione administration are cutaneous rash (from a mild rash to fatal Steven-Johnson syndrome or toxic epidermal necrolysis), severe abdominal pain, thyroid, liver, or kidney dysfunction, or some lethal complications such as air embolism, blood-borne infections, and potentially fatal sepsis (25). Therefore, although promising, its usage is to be done with caution for the patient’s safety.

Copyright © 2020, Journal of Skin and Stem Cell. This is an open-access article distributed under the terms of the Creative Commons Attribution-NonCommercial 4.0 International License (http://creativecommons.org/licenses/by-nc/4.0/) which permits copy and redistribute the material just in noncommercial usages, provided the original work is properly cited.
download pdf 259.72 KB Peer Review Comments ( 93.10 KB) Get Permission (article level) Import into EndNote Import into BibTex
Number of Comments: 0