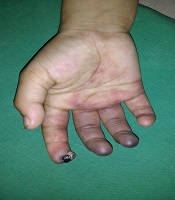 Nicolau syndrome is an iatrogenic dreaded adverse skin reaction leading to ischemic necrosis of skin and underlying tissue after parenteral drug injection. The etiopathogenesis is poorly understood. However, inflammation, reflex vasospasm, and thrombo-embolic occlusion of blood vessels, including arterioles and arteries, are suggested as the cause of ischemia.

We report a 12-year-old girl who developed Nicolau syndrome after a simple office procedure of intralesional sclera therapy with sodium tetradecyl sulfate for a apyogenic granuloma on her right index finger. Three days later, she reported complaints of excruciatingly painful swelling with bluish discoloration of the right hand involving the palm, entire index, middle, and ring fingers, and distal part of the little finger. Nicolau syndrome was documented after intramuscular injections of drugs. Nevertheless, there are very few reports of Nicolau syndrome following post intralesional sclerotherapy.

Nicolau syndrome is an iatrogenic dreaded complication caused by parenteral drug injection, which leads to variable degrees of skin and underlying tissue necrosis (1, 2). Immediate intolerable pain associated with purplish suffusion with or without reticulate purpura is the hallmark (1, 2). As per the available literature, intramuscular, subcutaneous, intravenous, and intra-arterial injections may lead to Nicolau syndrome. However, limited evidence are available regarding its occurrence following sclerotherapy. Sclerotherapy is a widely used procedure for varicose veins, spider veins, hemorrhoids, hydroceles, and vascular malformations (3). Off label utility of sclerotherapy in pyogenic granuloma is also documented in the literature with impressive results (4-6). In the present study, we reported a case of Nicolau syndrome occurring after intralesional injection of sodium tetradecyl sulfate (intralesional sclerotherapy) for pyogenic granuloma.

A sessile pyogenic granuloma (size 1 × 1 cm) on the right index finger-tip of a 12-year-old girl was injected with 0.2 mL sodium tetradecyl sulfate (STS) (3%, 30 mg/mL in 1:10 dilution with distilled water) using an insulin syringe until lesional blanching (without local anesthesia and under all aseptic precautions). Compression was performed using a cotton gauge for one minute after providing the procedure. Then, she was sent home after few hours of uneventful observation. She returned three days later with excruciating pain and purplish discoloration on the right hand. The physical examination revealed tenderness with diffuse purple-colored suffusion over the index, middle, ring, and distal part of the little finger of the right hand with retiform purpura over the proximal part of the right palm. A necrotic eschar was noted over the site of pyogenic granuloma (Figure 1). Local temperature was lower than surrounding normal skin. Peripheral pulses (radial, ulnar, and median arteries) at the right wrist were feeble. Brachial pulse was the normal volume and revealed tachycardia. Left-hand pulses were normal. Blood pressure was 110/70 mmHg. 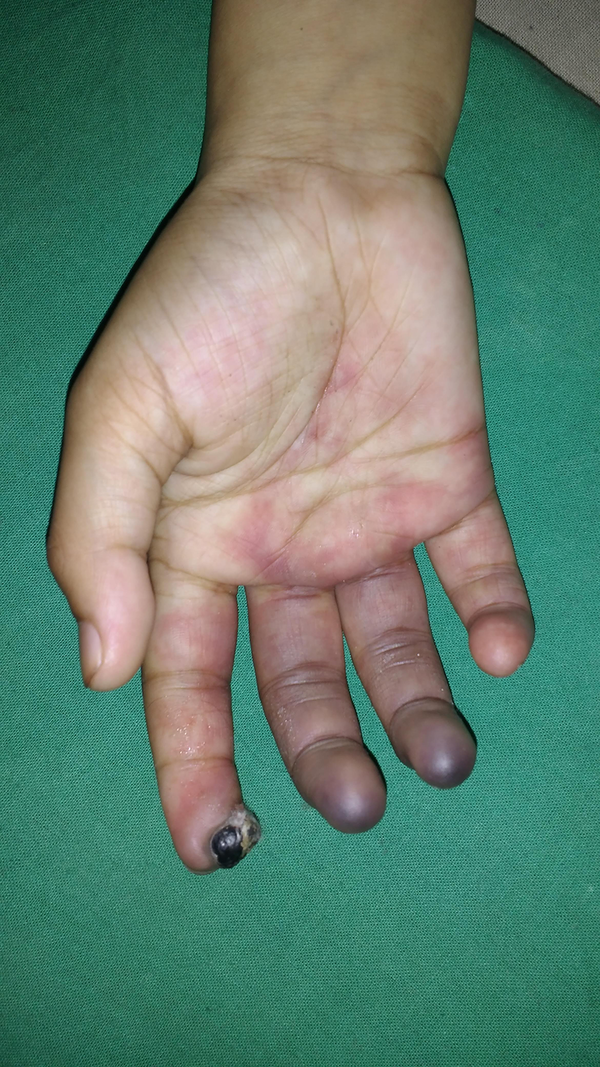 Colour Doppler investigation (right upper extremity) demonstrated declined velocities and biphasic flow in distal parts of the right radial and ulnar arteries due to vasospasm of distal portions without evidence of thrombus or stenosis. Proximal branches of the radial and ulnar arteries showed monophasic flow with reduced velocity. Nicolau syndrome following intralesional sclerotherapy was diagnosed, based on her clinical and radiological features.

She was admitted and intravenous antibiotics (inj ceftriaxone 500 mg i.v BD × 7 days) and ringer lactate, tab nifedipine 5 mg bd, tab pentoxifylline 400 mg (1/2 tablet tds), tab xanthinol nicotinate 150 mg (1/2 tab bd), subcutaneous heparin 20 mg od, and local nitroglycerine patches daily with tab tramadol 25 mg od and paracetamol were administered. In addition, warm gloves and local hygiene were advised. Doppler ultrasound was performed every third day, which indicated gradual improvement with normalization in flow and velocities in peripheral arteries of the right hand. Clinically, edema, pain, and suffusion over the proximal part of the right palm and digits were reduced. However, distal parts of the middle and ring fingers developed dry gangrene with a clear line of demarcation (Figure 2). Eventually, the gangrenous portions underwent spontaneous amputation leaving a residual deformity of digits (Figure 3). The entire course of this episode was managed in collaboration with departments of pediatric surgery and plastic surgery. 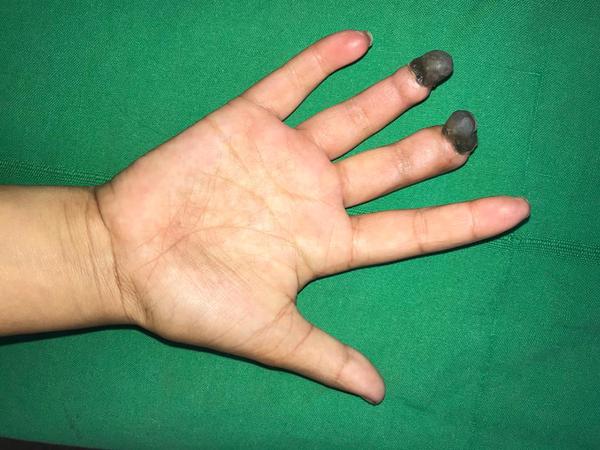 After 5 weeks of treatment-showing a reduction in edema, purpura but gangrene of distal part of digits 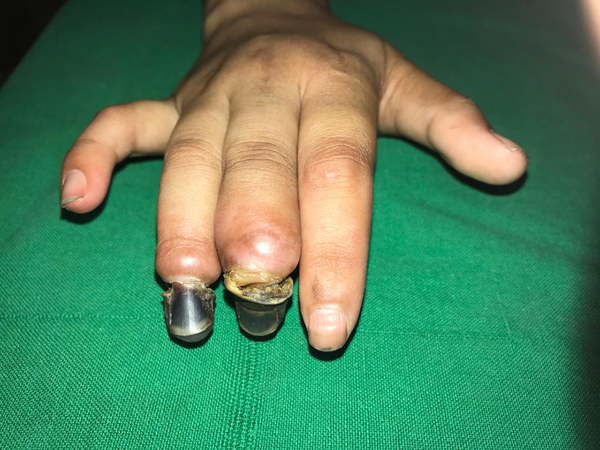 Nicolau syndrome (Embolia cutis medicamentosa) is an extremely rare but calamitous adverse effect of parenteral drug injection. The etiopathogenesis is unclear, but some suggested that necrosis occurs due to ischemia caused by reflex vasospasm secondary to needle prick, embolization of injected material, or pressure due to material placed around the vessel (1, 2).

It is characterized by intense pain at the injection site followed by the development of bluish discoloration of overlying skin. The livedoid suffusion is well-defined with sharp, angulated margins; sometimes, it assumes a reticulate pattern and has been referred to as non-inflammatory retiform purpura, livedo-like dermatitis, and livedoid dermatitis with severe necrosis. Skin discoloration may result in necrosis and ulceration involving the subcutis and muscular layer, leading to permanent tissue damage with deformities and disfiguring scars (1, 2). It is rarely life-threatening if associated with extensive skin necrosis and involvement of vital organs.

STS is a long-chain fatty acid that causes vascular intimal irritation leading to thrombus formation with vasospasm and eventual occlusion. It has been used successfully and safely for treating pyogenic granuloma (3-6). The inadvertent extravasation of sclerosant in the surrounding tissue can be prevented by techniques such as clamping of the stalk of pedunculated lesions, compression along the lesional periphery with a ring of an artery forceps, tourniquet, cyanoacrylate embolization before sclerotherapy or balloon embolization. Its management includes the early institution of anticoagulant therapy (heparin), drugs improving vascular flow (pentoxifylline, topical nitroglycerine), systemic steroids, and NSAIDS in order to reduce inflammation and local care. In our case, there were clinical and radiological evidence of severe arterial vasospasm and reduced perfusion with minimal signs of inflammation. Steroids were not administered in view of their limited benefit at this advanced stage and potential to aggravate the secondary infection, which had already set in due to ischemia and impending gangrene. Instead, after considering the risk-benefit ratio, we decided to use non-steroidal anti-inflammatory and vasodilator/rheological agents in an attempt to minimize the damage. Debridement may be required to remove the necrotic tissue. Maintaining peripheral perfusion with intravenous fluids and vasodilators is imperative. As early and accurate reporting of symptoms is mandatory to ensure favorable outcomes, our experience with the current case suggests that this procedure is better avoided in illiterate patients, vascular lesions on digits, ear lobules, nose tip, penile tip (end arteries), and children below the age of 18 (3-5).

Currently, only a single case report is published, which reported that Nicolau syndrome was encountered following sclerotherapy with sodium tetradecyl sulfate for pyogenic granuloma (7). While their patient experienced exaggerated pain immediately after injection of the sclerosant (considered a warning sign), our case presented the advanced symptoms three days after providing the procedure. This is probably why the lesions resolved completely in the afore-mentioned case without sequelae except for slight cutaneous atrophy. As a corollary, timely intervention within six hours would have allowed us to manage this adverse event more effectively, with a better chance of salvaging her digits. Unfortunately, although we tried to revive the rest of the hand, her distal digits were lost due to gangrene attributable to Nicolau syndrome.

Nicolau syndrome is a rare severe adverse event that occurs after a generally safe office procedure like intralesional sclerotherapy for pyogenic granuloma. In addition to necessary precautions during the procedure, prompt recognition and vigorous management of this complication are crucial to avert unfavorable sequelae. Further, prudent patient selection and detailed counseling with explicit informed consent (including specific mention of Nicolau syndrome) are recommended to avoid litigation against health care professionals.

Copyright © 2020, Journal of Skin and Stem Cell. This is an open-access article distributed under the terms of the Creative Commons Attribution-NonCommercial 4.0 International License (http://creativecommons.org/licenses/by-nc/4.0/) which permits copy and redistribute the material just in noncommercial usages, provided the original work is properly cited.
download pdf 6.24 MB Peer Review Comments ( 107.46 KB) Get Permission (article level) Import into EndNote Import into BibTex
Number of Comments: 0