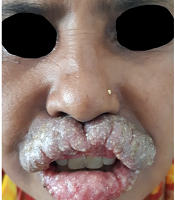 Pemphigus Vegetans of Neumann Type on Lip: A Case Report

Pemphigus is a chronic autoimmune vesiculobullous disease caused by autoantibodies directed against desmogleins (Dsgs). Pemphigus vegetans is a rare variant of pemphigus vulgaris, characterized by vegetative plaques, primarily occurring in flexures. It is a less common disease and involves the skin and mucosa due to disintegration of cellular adherence (acantholysis), resulting in intradermal split. We report this case of pemphigus vegetans of Neumann type for its rare presentation. We report a case of pemphigus vegetans, involving lips in a middle-aged female and sparing flexural areas. This patient was diagnosed on the basis of histopathology and treated successfully with intralesional steroids, resulting in the resolution of her plaques.

The term ‘pemphigus’ is derived from the Greek word pemphix, meaning blister or bubble. The incidence of the disease is 0.09 to 1.8% (1), usually seen in between the fourth and sixth decade of life; however, it may occur in any age group (2). It seems to affect men and women equally though some studies have suggested a slight female dominance (3, 4). Desmogleins 1 and 3 are desmosomal glycoproteins that belong to the cadherin family of calcium-dependent cell-cell adhesion molecules that contribute to the structure of the desmosomes, expressed on the epithelial cells of the skin and mucosa. Pemphigus is caused by autoantibodies directed against desmogleins (Dsgs), resulting in acantholysis.

Pemphigus vegetans is a less common variant of pemphigus vulgaris that comprises only 1% to 2% (5, 6). Pemphigus vegetans clinically manifests as heaped-up, cauliflower-like vegetating plaques commonly in flexures. This disorder affects chiefly middle-aged adults. It is caused by autoantibodies directed transmembrane glycoproteins and results in loss of intercellular adhesion between intact keratinocytes, which results in acantholysis. This disease occurs mainly on intertriginous areas, scalp, and face but may occur anywhere on the skin surface (7-9). The oral, gastrointestinal, respiratory, genital, and conjunctival mucosa can also be affected. According to the clinical manifestations, there are two subtypes: (1) the Neumann, and (2) Hallopeau subtypes. The Neumann type is characterized by bullae that extend and coalesce; later progressing to vegetating masses or plaques, which become dry, hyperkeratotic, and fissured (10).

Cerebriform tongue, a morphology with a typical pattern of sulci and gyri over dorsum of the tongue, is common in pemphigus vegetans. Approximately 50% of the cases of the Neumann type show cerebriform tongue. The Hallopeau type is characterized by a polycyclic eruption of pustules that form firm pink papillomas, which progressively flatten and change to dark brown plaques. The present case had vegetative plaques limited to lips, and the common sites like flexural and intertriginous areas were spared, making it a rare presentation.

A preliminary diagnosis of pemphigus vegetans was made based on the Tzanck smear test, which revealed multiple acantholytic cells (Tzanck cells). Skin biopsy was sent for histopathological examination for confirmation. A full-thickness biopsy was taken from the vermillion border of the upper lip. Under the microscope, using hematoxylin and eosin (H&E) staining, epidermis showed hyperkeratosis with pointed rete ridges, at places showed verrucous hyperplasia. Also, a collection of polymorphonuclear (PMN) cells along with eosinophils in stratum corneum were seen and two incomplete intraepidermal suprabasal clefts filled with PMNs, eosinophils, and few acantholytic epidermal cells. Papillary dermis showed dense infiltration by PMNs along with eosinophils, and few eosinophilic round structures were noted. These histopathological features confirm the diagnosis of pemphigus vegetans (Figure 2).

Since it was a localized plaque, a decision for intralesional immunosuppressive therapy was made by the authors in order to avoid any systemic side effects of immunosuppressants in the COVID-19 pandemic period. The patient was evaluated for intralesional steroid (ILS) therapy. Her laboratory parameters, chest X-ray, USG (abdomen and pelvis) were all within normal range. Intralesional steroids (injection of triamcinolone acetonide 10 mg/mL every three weeks) were started for the patient. She responded to therapy within three injections with complete resolution of lesions and was followed up to six months with no recurrence.

Pemphigus vegetans occurs mainly on intertriginous areas, scalp, and face. The present patient had vegetative plaques limited to lips, and the common sites like flexural and intertriginous areas were spared, which makes it a rare presentation. Drugs such as antihypertensives and chelating agents trigger the onset of pemphigus in some cases. This type of disease resolves after the stoppage of medication. In the present case, the patient had no history of intake of a triggering drug. A preliminary diagnosis of pemphigus vegetans was established in this case on the basis of presenting clinical features and a Tzanck smear test, which revealed multiple acantholytic cells (Tzanck cells), and then the diagnosis was confirmed by histopathology. Intertriginous areas, flexural areas, scalp face, and oral lesions are common. Other areas are very uncommonly involved; however, cases with lesions limited to foot, oral mucosa, lips, or toes have been reported rarely (11). Similar to the case reported by Dhamija, Ashish et al. (12), our case is unusual in its presentation of lesions that are limited only to the lips. The tongue, in the present case, does not show typical cerebriform pattern, which is seen in almost 50% of Neumann type cases.

The goal of the treatment is to induce complete remission while minimizing treatment-related adverse effects. Although dexamethasone cyclophosphamide pulse (DCP) therapy remains the mainstay treatment to reduce mortality and morbidity in pemphigus vegetans, (13) intralesional steroids in case of isolated lip lesions may help to reduce the morbidity of disease as well as the side effects of DCP therapy.

In patients presenting with vegetative plaques over lips, even though the usual sites of the disease are not involved, pemphigus vegetans as one of the differential diagnosis should be taken into consideration. Careful history taking and a high index of suspicion are helpful in reaching the correct diagnosis of a rare disease such as pemphigus vegetans, which may present in an unusual form. A simple tool such as biopsy can confirm the diagnosis in puzzling cases when a rare disease like pemphigus vegetans has a rare presentation. In a case with pemphigus vegetans limited to only one site, it may be advisable to use ILS as a conservative treatment modality to avoid systemic adverse effects of aggressive immunosuppressive therapy.

Copyright © 2021, Journal of Skin and Stem Cell. This is an open-access article distributed under the terms of the Creative Commons Attribution-NonCommercial 4.0 International License (http://creativecommons.org/licenses/by-nc/4.0/) which permits copy and redistribute the material just in noncommercial usages, provided the original work is properly cited.
download pdf 5.98 MB Peer Review Comments ( 94.63 KB) Get Permission (article level) Import into EndNote Import into BibTex
Number of Comments: 0