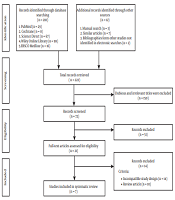 Elderlies are more prone to neurodegenerative diseases. One of the most common neurodegenerative diseases with limited effective treatments available is Alzheimer’s disease (AD). Adipose-derived stem cells (ADSCs) with neuroregenerative and neuroprotective capabilities have shown great potential to serve as a potential cellular therapy for AD. Adipose-derived stem cells’ efficacy in the treatment of AD is evaluated in this systematic review.

Elderlies are more susceptible to degenerative diseases including neurodegenerative diseases. The most common neurodegenerative disease among elderlies is Alzheimer’s disease (AD) (1). Alzheimer’s disease has always been a challenge in healthcare since it is the main cause of dementia, with 60 - 80% of AD patients suffering from dementia (2, 3). The incidence of AD is high and keeps rising every year (4). According to the World Alzheimer Report, there were about 40 million cases of AD in 2015. About US$ 818 billion is annually spent for research on AD, and every three seconds one new case of AS is diagnosed. The situation is further deteriorated with the 325% increase in the incidence of the disease by 2040 (5, 6).

Clinical manifestations of AD also affect the well-being of elderlies. Alzheimer’s disease may manifest with a progressive decrease in cognitive skills, language, visuospatial skills, personality, and behaviors, which may lead to the complete loss of basic daily life activities (7). These clinical manifestations are due to the pathogenesis of AD causing neurotoxicity (2, 8-11).

The pathology of AD roots in the formation of senile plaque (SP), and the accumulation of amyloid beta (Aβ) and neurofibrillary tangles (NFT) is the most common cause of SP. The formation of SP is through various cascades initiated when Aβ is present due to the mutation of the PS1/2 gene of the amyloid precursor protein (APP). This cascade involves the formation of Aβ oligomer, which causes synaptic dysfunction and neurohormonal instability. The presence of Aβ also induces the activation of inflammatory microglia and astrocytes, which play a role in local inflammation and increased oxidative stress. This leads to the alteration of kinase and phosphatase and hyperphosphorylation of tau protein (P-tau) creating NFT. Like Aβ oligomer, NFT also disturbs synaptic communication (2, 8-11).

A potential therapy for AD is utilizing adipose-derived stem cells (ADSCs), which are extracted through liposuction, a minimally invasive procedure. Besides being minimally invasive to extract, ADSCs are abundant in source because fat tissue can be found almost everywhere in the body. Another rationale for utilizing ADSCs as cellular therapy is their multipotency and autologous usage, which allows to avoid immunological rejection and tumorigenesis (15-17).

This systematic review was performed to review the outcomes of treatment with adipose-derived stem cells in Alzheimer’s disease starting from in-vitro, in-vivo, and clinical trials.

The preferred reporting items for systematic reviews and meta-analysis (PRISMA) was used to create this systematic review. Relevant studies were retrieved from PubMed, Cochrane Library, ScienceDirect, Wiley Online Library, and EBSCOhost from inception to 6 August 2020, with search terms as following: (“adipose tissue-derived stem cells” [All Fields] OR “stromal vascular fraction” [All Fields]) AND (“Alzheimer” [All Fields]). The search included preclinical studies and randomized controlled trials with no language restrictions applied. However, studies included in this review were restricted to English and Bahasa Indonesia, which were the only languages readable by the reviewers. Figure 1 shows the details of the literature search strategy. 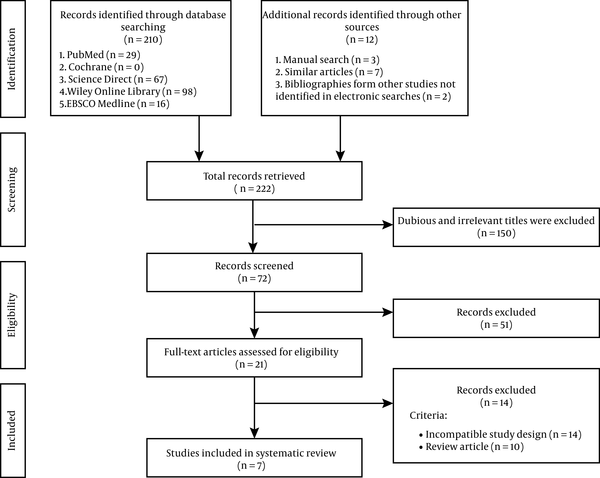 The two reviewers (GK and RMS) assessed the included studies’ quality. For the evaluation of the perceived risk of bias within the preclinical studies on animal model, the Systematic Review Centre for laboratory animal experimentation (SYRCLE) Risk of Bias tool was used (18), while the non-randomized phase 1 clinical study without control group was evaluated using the methodological item for non-randomized studies (MINORS) tool (19). No pre-determined guidelines were available to assess the bias risk for in-vitro studies.

4.1. Characteristics of the Articles

4.2. Risk of Bias within Studies

Table 2. Risk of Bias Assessment for In-vivo Studies a

Assessment of the perceived risk of bias in the non-randomized phase 1 clinical study was performed using the MINORS Risk of Bias tool. The study did not apply a control group and was non-randomized; thus, there was no comparison or blinding. This explains the 0 score for items 8 - 11 (Table 3). It raises concern regarding the potential bias of the outcome report. Lastly, the study reported adequate statistical analysis to support the outcome documented in the study. The summary of risk of bias for the non-randomized phase 1 clinical study is shown in Table 3.

Table 4. Reported Outcomes Related to the Efficacy of ADSCs in AD

Overall, in-vitro and in-vivo studies showed a significant reduction in Aβ concentration, APP-CT concentration, number of amyloid plaques, oxidative stress, neuron apoptosis when exposed to Aβ, and mRNA expression of TNF-α and IL-1β. A fa fall in P-tau was observed in three patients in the non-randomized phase 1 clinical trial. On the other hand, in-vitro and in-vivo studies exhibited a significant increase in IL-4 mRNA expression, IL-10, vascular endothelial growth factors (VEGF), and NEP production, neurogenesis, synaptogenesis, synaptic and dendritic stability, cognitive skills, and spatial skills. The non-randomized phase 1 clinical trial also showed an improvement in cognitive skills in five patients and an increase in hippocampal volume in two patients. An intriguing finding was the ability of ADSCs to penetrate the BBB of AD patients and activate the alternative phenotype microglia.

The regenerative potential of ADSCs has been studied and used for osteochondral tissue engineering and cell therapies, such as wound healing and calvarial defects (27). Based on the systematic review, we found that ADSCs also have a potential to be used in cellular therapy for AD.

The potential of ADSCs to be used as a regenerative cellular therapy for AD lies in their multipotency and autologous usage. This enables ADSCs to create any tissue in the body, except placenta, and avoid immunologic rejection. The differentiation of ADSCs is usually induced when they receive certain signals from damaged tissue that make them acquire tissue-specific phenotypes. Aside from pluripotency, the regenerative effects of ADSCs lie mainly in their autocrine production of various bioactive factors, such as growth factors, cytokines, chemokines, antiapoptotic factors, and immunomodulators in the form of gene products such as mRNA and miRNA species (17). These bioactive factors are often secreted in the form of exosomes and may affect the behavior of affected cells. Furthermore, bioactive factors which have immunomodulatory effects result in positive effects on AD, which is worsened through neuroinflammation in the CNS (17, 28).

The reviewed studies showed that ADSCs increased neurogenesis, synaptogenesis, and the stability of synapses and dendrites. The rationale behind this finding mostly lies in the multipotency of ADSCs, exosomes produced, and their ability to penetrate the BBB. Differentiation ADSCs can be induced by reactive oxygen species (ROS). In AD, excessive ROS induced by elevated levels of Aβ peptide leads to oxidative stress and inappropriate microenvironment for neurogenesis. Although ROS can induce differentiation of neural stem cells (NSC) or ADSCs, oxidative stress results in toxicity and cell death of the newly differentiated neurons. Interestingly, ADSCs have the ability to reduce ROS and increase the self-renewal capacity of the CNS that leads to neurogenesis through NADPH oxidase and PI3K/Akt pathway (23, 29). The possible mechanism behind ADSCs reducing ROS is through the exosomes produced, which may decrease ROS generation, enhance ROS’ scavenging capability, or repair oxidized molecules (23). Furthermore, reduced ROS also explains that increased neurogenesis promotes synaptogenesis and prevents neuronal membrane damage, which leads to the enhanced stability of both synapses and dendrites (30).

Aside from ROS reduction, exosomes of ADSCs (ADSC-Exo) have been found to induce remyelination in damaged neurons, which also explains the neuroregenerative capability of ADSCs (31). Moreover, ADSC-Exo have been reported to upregulate VEGF.26 It has been reported that VEGF plays a role in neuronal wiring of the CNS by regulating neuronal cell migration and neuroregeneration, which explains the increased neurogenesis, synaptogenesis, and stability of synapses and dendrites (32).

The ability of ADSCs to reduce ROS in AD also explains the reduced neuron apoptosis and increased neuron viability observed (24). Reports on the upregulation of VEGF by ADSC-Exo also explain the decrease in neuron apoptosis and increase in neuron viability. Vascular endothelial growth factors are reported to be able to inhibit Aβ-induced cytotoxicity in neurons. In AD, amyloid plaques co-aggregate with the VEGF produced. This causes VEGF depletion and neurodegeneration due to reduced neuroprotective effects (32). This phenomenon is further explained by the ability of ADSC-Exo to exert their neuroprotective effects against glutamate excitotoxicity, which causes neurodegeneration in AD. The mechanism through which ADSC-Exo exert their neuroprotective effects is the amelioration of neural recovery marker. The neural recovery marker ameliorated is the growth-associated protein 43 (GAP-43) and the number of GAP-43 positive neurites, which leads to neural development and regeneration. Another mechanism of ADSC-Exo is through increasing the levels of ATP, NAD, and NADH, which rescues neurons from glutamate-induced neuronal energy depletion in AD (33-35).

Furthermore, the degradation of Aβ is not only by phagocytosis through microglia, but ADSC-Exo also play a role in the degradation of Aβ. It has been found that ADSC-Exo stimulate increased production of Aβ degradative enzymes. These enzymes include insulin-degrading enzyme (IDE) and NEP (40, 41). Although the two of them are able to degrade Aβ both intracellularly and extracellularly, the degradative mechanisms differ between the two of them. Neprilysin degrades Aβ by cleaving peptides on the N-terminal of hydrophobic residues and has broad substrate specificity (42, 43). On the contrary, IDE is only proteolytic towards β-structure-forming substrates, which makes them the major protease responsible for Aβ clearance (41). Moreover, an increase in matrix metalloproteinase-9 (MMP-9) was also reported and may also explain the reduction of Aβ. Studies have found that MMP-9 exerts neuroprotective effects through the cleavage of APP by enhancing α-secretase activity. With the enhanced cleavage of APP, the production of Aβ will be diminished (43). Undoubtedly, the decrease in Aβ will cause reduce ROS and will also stop the formation of both P-tau and NFT, which explains a reported finding in this review (11).

In light of all the evidence presented in this systematic review, ADSCs have an excellent potential as a novel therapy for AD. Preclinical studies found that ADSCs have neuroregenerative and neuroprotective capabilities and reduce the concentration of Aβ, which plays a main role in various pathological processes in the progression of AD. These findings were further proven in another preclinical study and a non-randomized phase 1 clinical trial, which showed that ADSCs could alleviate cognitive and spatial skills impairment.

Copyright © 2020, Journal of Skin and Stem Cell. This is an open-access article distributed under the terms of the Creative Commons Attribution-NonCommercial 4.0 International License (http://creativecommons.org/licenses/by-nc/4.0/) which permits copy and redistribute the material just in noncommercial usages, provided the original work is properly cited.
download pdf 161.80 KB Peer Review Comments ( 105.90 KB) Get Permission (article level) Import into EndNote Import into BibTex
Number of Comments: 0