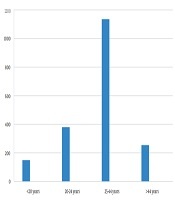 Sexually transmitted infections (STIs) constitute a major public health problem in both developed and developing countries. Human immunodeficiency virus (HIV) and STIs are linked in their similar mode of transmission, with STIs facilitating the acquisition and transmission of HIV. The prevalence pattern of individual STIs may evolve over time necessitating a corresponding change in management strategies.

The study was conducted to determine the burden and any change in the etiological trend among attendees of an STIs clinic at a tertiary care hospital.

A definite change in the profile of STIs was observed with ulcerative STIs (particularly herpes genitalis) constituting the major burden against a discernible back drop of decreasing non-herpetic STIs. A systematic, regional, periodic synopsis would not only help to follow and document the dynamic trends, but also can help to assess the effectiveness of control programs.

Sexually transmitted diseases/infections (STIs) are highly common in dermatologic clinical practice and research. Certain groups of individuals are considered to be at the highest risk for acquiring STIs, comprising of sexually-active youth and persons indulging in promiscuous behaviors. Globally, while most of the attention seems to be focused on human immunodeficiency virus (HIV) infection, there has been a perceptible escalation in the burden of other STIs. Their potentially catastrophic impact on the quality of life of affected persons, particularly women, renders STIs an important global health priority. Another significant aspect is the relationship between STIs and HIV, with both infections affecting the same population and linked by biological interactions. Infection with certain STIs can increase the risk of acquisition and transmission of HIV and alter the way the disease progresses (1). Additionally, STIs can cause long-term adverse effects on reproductive health in both males and females. Despite this, there are limited published data documenting the burden and profile of STIs in our region.

The present study aims to understand the patterns of STIs and the HIV prevalence among patients attending an urban-based tertiary care hospital in India over a period of two years.

A retrospective analysis of data retrieved from the clinical records of patients attending the STI clinic over a period of two years (July 2018 to July 2020) was carried out at Sassoon General Hospital, Pune, Maharashtra, India.

All individuals above the age of 18 years presenting at the STI clinic were considered eligible, and their data was compiled for this analysis. A syndromic case management approach based on the National Aids Control Organization (NACO) guidelines was used for the classification and treatment of the patients. According to the institutional protocol, all patients presenting with genital ulcer disease are subjected to thorough clinical examination followed by investigations like dark ground illumination, Tzanck smear, Gram staining, culture, venereal disease research laboratory (VDRL) test, and enzyme-linked immunosorbent assay (ELISA) for HIV. In cases where an etiological diagnosis cannot be reached, syndromic management is offered. Partner tracing and counseling is routinely performed for all patients as part of the NACO protocol. Parameters noted are age, gender, marital status, type of STI syndrome, and HIV sero-status. Institutional Ethics Committee approval was obtained (ND-Dept-0621190-190), and strict confidentiality regarding patient identity was maintained. 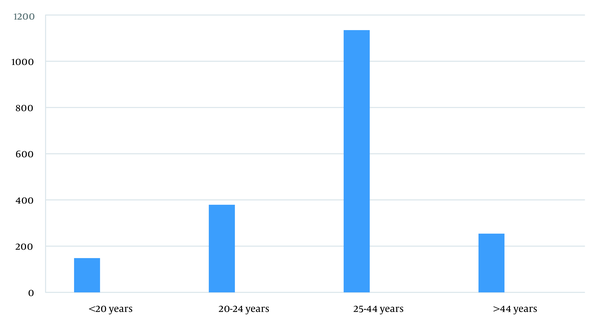 Prevalence pattern of various STI syndromes in this study

Comparative prevalence of various STI syndromes in the two years

Figures 5 and 6 depict the comparative prevalence of various STI syndromes in men and women, respectively, during the two-year study period.

The present study was carried out to understand the current status of STIs in an urban-based tertiary health care center, with respect to their prevention and management. The burden of STIs differs with region and gender and is probably greatest in resource-poor countries. Sexually transmitted infections are an essential public health problem in India. A community-based prevalence study conducted by the Indian Council of Medical Research (ICMR) reported that over 6% of the adult population suffer from an episode of STI every year. According to the World Health Organization (WHO), more than 1 million STIs are acquired every day worldwide (2, 3).

Syndromic management pertains to the approach of identification and treatment of STIs based on the organisms most commonly responsible for each syndrome and sign observed by the health care provider.

The management of seven major STI syndromes (i.e., Genital ulcer disease, vaginal discharge, urethritis, lower abdominal pain, inguinal bubo, scrotal swelling, neonatal eye discharge) is incorporated in the NACO guidelines. They describe the clinical syndrome, the specific STI under the syndrome, and the causative organisms of the STI syndrome. The recommended treatments (called ‘kits”) are designed to be effective for all the pathogens likely to cause the identified syndrome. The approach to the client with specific points to be considered during history taking and examination has been highlighted. If facilities and skills are available, the requisite laboratory tests are also mentioned (3). For example, patients presenting with genital ulcers are further categorized into herpetic and non-herpetic depending upon clinical examinations alone wherever possible. In situations where clinical conviction is difficult, diagnosis is based on investigations like Gram staining, Tzanck smear, dark ground illumination (DGI), VDRL, etc.

Herpetic genital ulcers were treated with Acyclovir 400 mg tablet thrice daily (TDS) for seven days according to the NACO guidelines. The group with non-herpetic genital ulcer were treated with benzathine penicillin 2.4 MU intramuscular (IM) injection and azithromycin tablet 1-gram single dose, and if allergic to penicillin, doxycycline 100 mg (twice daily/BID for 15 days) and 1-gm azithromycin tablet (single dose). In the current analysis, herpes genitalis was the most common ulcerative STI observed. Higher incidence of herpes genitalis has been reported by previous Indian studies (Ray et al. (4), Devi et al. (5), Vora et al. (6), and Jain et al. (7)). A low prevalence of herpes genitalis has been reported by Manas and Ramadasan (8) In our study, genital ulcer was the most common presenting syndrome followed by vaginal discharge, lower abdominal pain, and urethritis. During both years, STIs were more prevalent among the age group of 25 - 44 years, and males out-numbered females. These observations are comparable to those of Devi et al. (5). This signifies the target population for health care programs for the control of STIs. According to the WHO, more than 500 million people are estimated to have genital infection with herpes simplex virus (9).

A large proportion of females attending our STI center presented with vaginal discharge and were treated with single doses of secnidazole tablet 2 gm and fluconazole tablet 150 mg.

Sexually-transmitted causes of vaginal discharge are trichomoniasis, bacterial vaginosis, candidiasis (for vaginitis), chlamydia, and gonorrhoea (for cervicitis). The initial assessment of such patients requires a thorough history, including sexual history, clinical examination, and laboratory investigations for etiological identification. We noted that approximately a third of the females complained of chronic lower abdominal pain, a manifestation of pelvic inflammatory disease (PID) (treated with single dose cefixime tablet 400 mg along with twice daily doses of metronidazole tablet 400 mg and doxycycline capsule 100 mg for 14 days). This is a notorious complication of long-standing untreated gonococcal or chlamydial cervicitis carrying a high risk of primary and secondary infertility and reproductive morbidity. This observation and the higher prevalence of STLs among married individuals points towards the significant quantum of neglected STIs in the community and emphasizes the urgent need for creating greater awareness among the target population with intensified case finding and proactive counseling.

Pelvic inflammatory disease is generally associated with un-diagnosed urethritis in the male partner. As a corollary, this underlines the importance of partner notification and sexual-contact tracing with timely, appropriate, and simultaneous management of both partners. We found a relatively low prevalence of urethritis among the male attendees of our STI clinic over the past two years compared to Vora et al. (6), which either indicates a true fall in prevalence or more likely suggests missed or delayed diagnosis, at least in some cases. This may be attributable to the subclinical or insidious presentation, especially in non-gonococcal or non-specific urethritis. Patients with urethral discharge were treated with single doses of azithromycin tablet 1 gm and cefixime tablet 400 mg.

Sexually transmitted infections such as herpes simplex virus (HSV) type 2 and syphilis can increase the risk of HIV acquisition (10). Analysis of our data showed that the HIV seropositivity rate amongst ulcerative STIs was 1.8 times that observed amongst non-ulcerative STIs. The predominant STI associated with HIV was herpes genitalis over both years, consistent with Devi et al. (5)

This study was based on syndromic management, which is a standardized approach to STIs endorsed by the Government guidelines in India, and hence the results and observations can be extrapolated practically to the implementation of the existing control programs, especially at the field level. Despite the thorough search through the literature using search engines (Google Scholar, PUBMED, Medline), we were unable to find a similar study to compare our findings. The major limitation was the retrospective study design, due to which some key parameters like proportion of pregnant females, sexual orientation of the cases, and the composition of STIs in this group of attendees could not be analyzed owing to missing data. We found major lacunae in the maintenance of records, with no format to keep track of the follow-up of treated patients, specifically with respect to response to the treatment administered. This possibly divests the NACO of data that is essential for reporting an extremely important indicator of STIs control. Moreover, as it was based on syndromic management, the exact pathogen responsible for the disease could not be identified in many cases. Non-syndromic STIs like genital warts (condyloma acuminata) and genital molluscum was not included in the data entry. Hence, larger prospective studies are warranted to address all these issues. The present analysis paves the way for further in-depth exploration of the status of various aspects of STIs.

This study documents the overall and syndrome-wise burden of STIs at a tertiary care hospital. The trend over the past two years indicates a rise in the prevalence of viral STIs, particularly herpes genitalis, accompanied by a perceptible decline in the prevalence of non-viral STIs. A decline in attendees was noted during the second year, which included six months of the COVID-19 pandemic. There was also considerable variation in the prevalence of STIs between different studies based on the region and time period of data collection, indicating that STIs are dynamic and there is a need for customized prevention programs. This information serves as a guide to assess the effectiveness of contemporary STIs control programs and to prioritize future strategies for the prevention and management of STIs in the community.

Copyright © 2021, Journal of Skin and Stem Cell. This is an open-access article distributed under the terms of the Creative Commons Attribution-NonCommercial 4.0 International License (http://creativecommons.org/licenses/by-nc/4.0/) which permits copy and redistribute the material just in noncommercial usages, provided the original work is properly cited.
download pdf 161.80 KB Peer Review Comments ( 110.25 KB) Get Permission (article level) Import into EndNote Import into BibTex
Number of Comments: 0