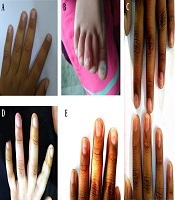 Hand-foot-mouth disease (HFMD) is common, but nail changes have not been well described. We described nail changes in HFMD. Nail changes following (HFMD) in two outpatient clinics were assessed over two years. Out of 524 cases of HFMD, 40 patients (7.6%) presented with nail problems, 29 cases had onychomadesis, and 11 cases had Beau’s lines. The median age of the subjects was 36 (15 - 126) months, and slight male preponderance (23:17) was seen. HFMD is a common disease having delayed nail changes also. So identification of and preventive strategies are required to limit complications.

Here, we reported cases referring to two outpatient clinics over a period of 2 years. Out of 524 clinically diagnosed cases of HFMD, 40 children (7.6%) had nail changes following HFMD, 29 cases had onychomadesis, and 11 patients had beau’s lines (Figure 1 and Table 1). The median age of the subjects was 36 (15 - 126) months, and a male preponderance was observed (23:17). Out of 40 cases, 18 cases were identified retrospectively by their records and history, and the rest 22 cases were identified in the follow-up for HFMD. The onset of nail changes was 32.7 ± 52 days (range 22 - 42 days) after the onset of fever, according to the reports by caregivers and most cases recovered completely after 3 - 4 months. The number of patients showed a decrease compared to the previous year. Most cases were given symptomatic treatment and assurance while few of them required antibiotics and antifungal treatment due to the suspicion of secondary infection. 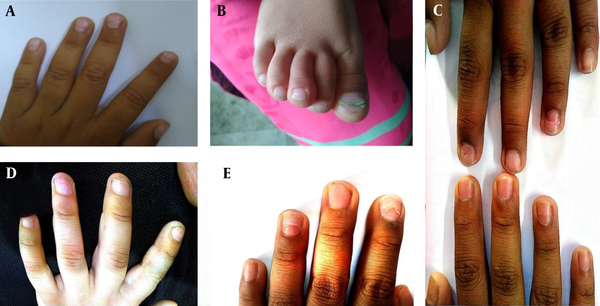 Most children with HFMD had self-limiting clinical signs with a short incubation period of 3 - 6 days (1). The main clinical features were erythematous, papulovesicular rash over palms, soles, buttocks, knees, elbows, oral mucosa with or without pruritus, and pain (2). The disease began with a fever, sore throat, cough, malaise, and a decrease in appetite. After these symptoms, the rash was developed in the mouth, palms, soles, sometimes on buttocks and genitals as a papule, blisters, and later progressed to an ulcer.

Nail and cutaneous changes appear after healing HFMD. Onychomadesis is a condition without any inflammation (3). It causes separation of the nail plate from nail matrix with or without further falling of nails. The exact etiology for this occurrence is not known; however, it may be due to viral infections that affect the nail growth temporarily, and as a child is recovered from the illness, he may be recovered completely without residual changes. Nail changes are also seen in other conditions, like Kawasaki disease, measles, periungual dermatitis, traumatic nails, epidermolysis bullosa, and also after the use of certain drugs. Chiu et al. (4) reported that the major cause of onychomadesis is the damage of nail matrix by certain novel and virulent viruses, mostly coxsackievirus (CV) A6, and direct injury by HFMD to nail matrix was rated as a minor cause. Osterback et al. (cited in Chiu et al.) found CVA6 in nails of a case with onychomadesis after HFMD. They concluded that onychomadesis was caused due to damage of the nail matrix by the replication of CVA6 (4). In this study, we observed nail changes in 7.6% of children of outpatient clinics diagnosed clinically as cases of HFMD. Nag et al. (5) followed up patients with HFMD and found nail changes in one-third of cases. Clementz and Mancini (6) noticed temporal association of nail changes following HFMD. In 2020, fewer cases were observed than the previous year, which may be due to the closure of schools; thus, parents were more engaged about the hygiene of their children. Moreover, in spite of a large number of HFMD cases and related complications, currently, neither treatment nor vaccination is available. During the COVID-19 pandemic, the number of RT-PCR apparatus increased; thus, the exact etiological diagnosis can be made. Also, it is necessary to develop preventive strategies, including the development of vaccines for the HFMD to avoid dreaded complications in children. Our study had some limitations. We assessed outpatient cases only, and the diagnosis was based on clinical findings, and the etiological agent was not isolated.

Conclusion: It can be concluded that physicians should be familiarized with HFMD and related complications to avoid unnecessary treatment of this condition as fungal or bacterial infections, and parents can be counseled accordingly.

Copyright © 2020, Journal of Skin and Stem Cell. This is an open-access article distributed under the terms of the Creative Commons Attribution-NonCommercial 4.0 International License (http://creativecommons.org/licenses/by-nc/4.0/) which permits copy and redistribute the material just in noncommercial usages, provided the original work is properly cited.
download pdf 3.52 MB Peer Review Comments ( 111.54 KB) Get Permission (article level) Import into EndNote Import into BibTex
Number of Comments: 0