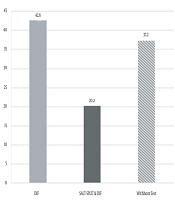 Skin diseases are the fourth most common cause of human illness, and blisters with different clinical manifestations make a diagnostic challenge.

This study aimed to evaluate the frequency and causes of subepidermal gaps or blisters, as well as the compliance rate between the initial and final clinical diagnoses based on pathology reports.

In this cross-sectional study, pathology reports of subepidermal blisters or gaps were evaluated in the patients referred to the Razi Laboratory of Rasht from 2015 to 2019. The samples were examined by a pathologist after hematoxylin and eosin staining. The reports included demographic information, clinical differential diagnoses, final diagnosis, direct immunofluorescence findings, and salt split results. Finally, the compliance rate of clinical diagnosis with pathology reports was determined.

A total of 183 pathology reports were evaluated, 170 of which contained the final diagnosis. Females were more frequently affected by the disease, and pemphigoid bolus and lichen planus were the most prevalent final diagnoses. The compliance rate between the initial and final diagnoses was 94%. About 37.2% of the reports lacked direct immunofluorescence (DIF) and salt split, and only 42.6% of the samples had undergone DIF examination, while 20.2% had both DIF and salt split. There was no significant association between the compliance rate of the final diagnosis with age, sex, and undergoing diagnostic tests.

A high incidence of subepidermal gaps or blisters was seen in middle-aged individuals and females. The compliance rate of the initial clinical diagnosis with the final diagnosis based on pathological reports was high. Our findings emphasize the importance of histopathological examination and the complementary role of direct immunofluorescence and salt split in diagnosis.

Skin diseases are the fourth most common cause of human illnesses and are responsible for an enormous non-fatal burden. These diseases increase with age, are more frequent in men than in women (1), and impose significant physical and psychological impacts. The importance of skin diseases is often underestimated because of their low mortality rate and chronic nature. However, their prevalence is high, so that they affect between 21 and 87% of the general population (2, 3).

Autoimmune immunobullous disorders are a group of disorders characterized by the involvement of epidermal cells and basic membranes (4). These disorders usually manifest by blisters on the skin and mucous membranes and are divided into two groups: (1) intra-epidermal; and (2) subepidermal, regarding the pathological type of blister involvement (5, 6). The annual incidence of autoimmune blister diseases has been estimated as 10.4 cases per million (7).

Autoimmune subepidermal blistering diseases of the skin and mucosa constitute a large group of sometimes devastating diseases, encompassing bullous pemphigoid, gestational pemphigoid, mucous membrane pemphigoid, epidermolysis bullosa acquisita (EBA), and anti-p200 pemphigoid. These diseases, which include a wide range of blistering diseases, have polymorphic and misleading manifestations, show significant clinical and immunopathological overlap, and usually occur between the ages of 60 and 70 years and, in rare cases, during pregnancy and childhood (8). The management of affected patients is often challenging, and classification and management are based on clinical, histological, and direct and indirect immunofluorescence findings. However, there is significant clinical and histological overlap between these diseases, and clinical heterogeneity in each disease is even remarkable (9).

In recent years, a few studies have evaluated the clinical differential diagnoses of skin blisters. There are often overlapping and misleading features in the clinical diagnostic reports of subepidermal autoimmune blister disease. On the other hand, the impacts of this condition on patients’ quality of lives are significant. Regarding the need for pathological examination to reach a definite diagnosis, we decided to investigate the frequency and causes of subepidermal gaps or blisters. We also determined the compliance rate between the initial and final clinical diagnoses based on pathological findings.

This cross-sectional study was performed on patients with subepidermal blisters or gaps, based on their pathological reports, referred to the Razi Laboratory in Rasht, the north of Iran, from 2015 to 2019. The inclusion criterion was the observation of blisters or subepidermal gaps in pathological examination, and the exclusion criterion was uncertain final diagnosis.

Patients’ data, including age, sex, and clinical diagnosis, were extracted from medical documents and pathology reports available in our laboratory. All reports were reviewed by one researcher. The samples of patients with subepidermal blisters or gaps for pathological examination are routinely obtained in our laboratory according to standard diagnostic and sampling methods and stained with hematoxylin and eosin. In the cases suspected of having autoimmune subepidermal diseases, both direct immunofluorescence (DIF) and the Salt Split test are performed based on the discretion of the physician.

This study was approved by the Ethics Committee of Guilan University of Medical Sciences (ID: IR.GUMS.REC.1399.291).

Table 1. The Frequency of Initial and Final Clinical Diagnosis in Patients with Subepidermal Blisters/Gaps

To establish the final clinical diagnosis, direct immunofluorescence (DIF) was performed for 78 cases (42,6%), and the results of both DIF and the Salt Split test were available for 37 patients (20.2%). The diagnostic test had not been reported for 68 cases (37.2 %) (Figure 1). 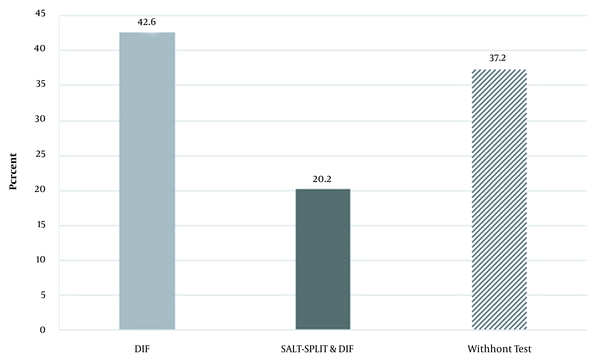 The frequency of performing direct immunofluorescence (DIF) and the Salt Split test for establishing the final clinical diagnosis.

Regarding the final clinical diagnosis, bolus pemphigoid (59.1%) and lichen planus (68%) were more prevalent in females, while lichen planopilaris (66.7%) and erythema multiform (57.1%) were more common in males. The prevalence of these diseases was also higher in the age range of 41 - 60 years (37.1%, 63 cases).

Table 2. The Compliance Rate Between the Initial and Final Clinical Diagnoses Regarding Age, Gender, and the Diagnostic Test

There is considerable variability in the concordance between histopathological and clinical diagnoses in patients with skin diseases. Regarding a recent study in 2019, the full concordance between the clinical and pathological diagnosis was low, reflecting the fact that biopsies were generally obtained only in cases where the clinical diagnosis was a dilemma (10). In the present cross-sectional study, the pathology reports of the blisters or gaps forming underneath epidermis were evaluated in the patients referring to Razi Laboratory in Rasht from 2015 to 2019. The results of this study showed a high compliance between the initial and final clinical diagnoses based on pathological reports. Pemphigoid bolus and lichen planus (classic) were the most common initial and final diagnoses. The compliance rate was not significantly associated with age, sex, and the diagnostic test performed. Al-Saif et al. reported 76% clinicopathological concordance in a wide range of skin diseases diagnosed by dermatologists at a tertiary care hospital over more than 15 years (10). The estimated compliance rate in our study was higher than that reported by the previous studies assessing the accuracy of the clinical diagnosis made by dermatologists based on biopsy confirmation. The clinicopathological concordance in these studies ranged between 67% and 87% (11, 12). The results of our study were in line with those of Kudligi et al. (13) and Karattuthazhathu et al. in 2018 (14). In the study of Kudligi et al., pemphigus vulgaris (62%) constituted the most common vesiculobullous disorder regarding the initial and final clinical diagnosis. In 96% of the patients, a correlation was seen between clinical and histopathological findings, while this rate was reported 89% between histopathological and DIF findings (13). In a study by Karattuthazhathu et al., pemphigus vulgaris also headed the list among all lesions, followed by bullous pemphigoid. Among all, the concordance was reported in 87% of the cases between the histopathological and clinical diagnoses and in 77.8% between histopathological and immunofluorescence, highlighting the comparable diagnostic efficiency of morphological-histopathological examination and the immunofluorescence technique (14). Daniel et al. (2020) demonstrated that the most frequent clinical diagnoses in their study were pemphigus vulgaris (38%) and bullous pemphigoid (31%), and histopathologic findings revealed subepidermal blister (52.3%) as the most common finding, indicating a good positive correlation of 0.546 between the two methods (15). Differences in the rate of diagnostic compliance in various studies can be related to variabilities in the skill and experience of physicians and the sample size.

According to studies, immunofluorescence techniques are essential to supplement clinical and histopathologic findings to establish the diagnosis of autoimmune vesiculobullous disorders. Among these techniques, DIF is the best method for the detection of immunocomplex deposition that can be seen in most autoimmune lesions, especially in subepidermal blistering diseases (16, 17). Mysorekar et al. (2015) reported a very good concordance between clinical, histological, and DIF results (agreement = 93.4%, κ = 0.90) (18). Concordance between clinical, histopathological, and direct immunofluorescence findings varies considerably among various skin diseases (81% for pemphigus vulgaris, 60% for pemphigus foliaceus, and 50% for bullous pemphigoid) (19). The results of the present study showed that in 37.2% of our patients, no diagnostic test had been mentioned in the pathological examination. The DIF test was performed in 42.6% of the patients, and both DIF and the Salt Split test had been conducted for 20.2% of the patients. However, there was no significant relationship between the initial and final clinical diagnoses regardless of undergoing complementary tests or not. This finding emphasizes the efficacy of histopathological examination and complementary tests, which is in line with the observation of Kudligi et al. (13), confirming the efficacy of histopathological examination in cases with strong clinical suspicion. They also stated that in the places where DIF was not economical, histopathological examination could deliver acceptable outcomes. Our results were also in line with the findings of Karattuthazhathu et al. (14), who also confirmed the role of DIF as a complementary, and not an alternative, test for histopathological examinations. Also, these findings were in line with the observations of De et al. (20), who regarded a complementary and not alternative role for the Salt Split technique for histopathological studies.

Based on the results of the present study, subepidermal blisters or gaps were more prevalent in the age range of 41 - 60 years. In our study, 62.1% of patients with pemphigoid bolus were between 40 and 80 years old, and 31.8% of them were over 80 years old. About 68% of patients with lichen planus were in the age range of 40 - 80 years. These results were in parallel with the observations of Ben Mordehai et al., who reported that the age of disease onset in patients with pemphigoid bolus was 76 years (21).

The results of this study showed a high compliance rate between the initial and final clinical diagnoses based on pathological reports. Middle-aged individuals and females were more involved. Common causes of subepidermal gaps and blisters were pemphigoid bolus, lichen planus, lichen planopilaris, and multiform erythema. Our findings highlighted the importance of histopathological examination and the complementary role of the direct immunofluorescence and Salt Split techniques in establishing a diagnosis. The findings of this study can assist in the differential diagnosis of pathologic subepidermal gaps and blisters.

Copyright © 2021, Journal of Skin and Stem Cell. This is an open-access article distributed under the terms of the Creative Commons Attribution-NonCommercial 4.0 International License (http://creativecommons.org/licenses/by-nc/4.0/) which permits copy and redistribute the material just in noncommercial usages, provided the original work is properly cited.
download pdf 420.34 KB Peer Review Comments ( 97.88 KB) Get Permission (article level) Import into EndNote Import into BibTex
Number of Comments: 0