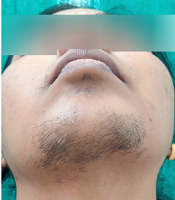 Impact of Hirsutism on the Quality of Life: A Cross-Sectional Pilot Study from Dermatology Life Quality Index Western India

Hirsutism is defined as excess terminal hair growth over androgen-dependent areas in women. It may cause significant social and psychological stigma with a negative impact on the quality of life. However, there is a dearth of data regarding this important parameter from the Indian sub-continent.

A cross-sectional study was performed to elucidate the quality of life of women with hirsutism using the dermatology life quality index (DLQI).

The severity of hirsutism was graded by modified Ferriman-Gallwey Score (F-G score) and correlated with quality of life by employing self-administered questionnaires of DLQI.

Of 40 women with hirsutism (mean DLQI score 5.55 ± 1.501), 3% demonstrated no effect, 52% small effect, and 45% moderate effect. Among domains, “symptoms and feelings” had the highest mean DLQI. Moreover, F-G score and DLQI had a weak positive but insignificant correlation. There was no significant correlation between DLQI and variables like age, marital status, occupation, and polycystic ovarian syndrome (PCOS).

Hirsutism had a small to moderate impact on the quality of life, with symptoms and feelings as the most affected domain.

The word ‘hirsutism’ originates from the Latin word ‘hirsutus’ meaning ‘hairy (1). It pertains to excessive growth of thick, long, dark, and terminal hair in women at androgen-dependent sites of body, namely mustache, beard area, upper chest, buttocks, pubic region, and abdomen (2). Up to 10% of women are reported to be affected by hirsutism during their reproductive age (3). Ferriman and Gallwey Score is a tool used to assess the severity of hirsutism (4). World Health Organization (WHO) defines quality of life (QoL) as “an individual’s perception of their position in life in the context of the culture and value systems in which they live and in relation to their goals, expectations, standards, and concerns” (5). This subjective measure of well-being is assessed by a ten-item dermatology life quality index (DLQI), which is a simple, practical, and validated questionnaire designed to elucidate the extent of disability associated with various dermatological disorders (6). Hirsutism is cosmetically disfiguring and it can adversely affect social and psychological domains of a woman’s life. Currently, there is a dearth of information regarding this important aspect of women with hirsutism in our setting. The measurement of QoL can indicate the need for supportive or psychological intervention. Overall, it has implications for treatment design with the potential to enhance patient care and outcomes in myriad ways.

W aimed to evaluate the effect of hirsutism on QoL by applying DLQI, and to identify any correlation between DLQI and various patients’ and hirsutism-related parameters.

The present observational, cross-sectional study was conducted in the Dermatology Department of Sassoon General Hospital, Pune, Maharashtra, India, from December 2020 to February 2021. This study was approved by Institutional Ethics Committee. Forty voluntary female subjects above 16 years of age with clinical diagnosis of hirsutism (based on modified Ferriman Gallwey scoring system), candidates for laser hair reduction after complete evaluation (but without any prior history of epilation or depilation), were enrolled. Those with hypertrichosis (due to systemic or local disease or drugs) or other facial dermatoses like acne, pigmentary, or photosensitivity disorders were excluded.

A detailed history [age, marital status, occupation, drug intake, and polycystic ovarian syndrome (PCOS)] and examination [modified Ferriman-Gallwey Score (F-G score) for severity of hirsutism] were carried out with written informed consent while maintaining strict confidentiality (Figure 1A and B). For each of nine potentially involved sites, a score on a scale of zero (absence of hair) to four (extensive terminal hair growth) was noted. A total mF-G score was calculated as a sum of all sites (ranging from zero to 36). Clinical evidence of hirsutism was depicted by a total score > 8. The patients were categorized into mild (8 to 15), moderate (16 to 25), and severe hirsutism (26 to 36) groups. According to our institutional protocol, all of these women were already evaluated for PCOS before initiating any medical or cosmetic treatment. They were instructed to fill out a DLQI questionnaire (in the language understood by them) that includes ten questions encompassing six different domains of QoL, e.g., feelings and symptoms (Q1, 2), activities of daily living (Q3, 4), activities of leisure (Q5, 6), schooling and work (Q7), personal relationships (Q8, 9) and treatment of disease (Q10). They were instructed to mark on a scale from 0-3 for each of the 10 questions, how they felt their lives were affected by the disease over the preceding week. Possible responses for each question were 0 = not at all, 1 = a little, 2 = a lot, and 3 = very much. Total score ranged from 0 - 30. A higher score indicates poorer quality of life and vice versa. The data were analyzed after compiling the results. 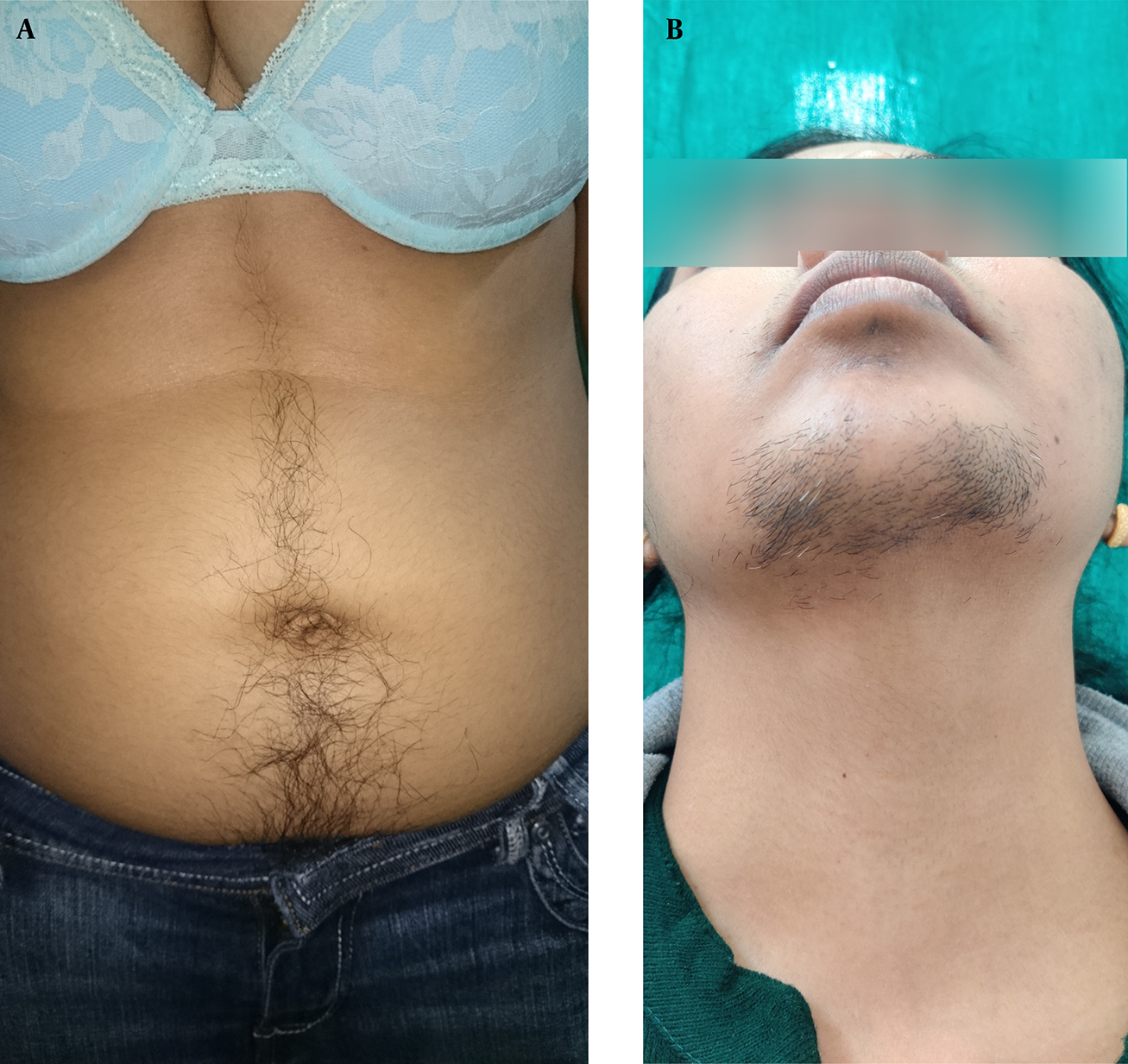 Correlation between severity of hirsutism (F-G score) and DLQI.

Correlation between severity of hirsutism (F-G) score and age.

Correlation between DLQI and age in hirsutism.

Table 1. Correlation of Modified F-G score and DLQI with Demographic Variables and PCOS

Hirsutism is excess terminal hair in a male pattern affecting 5 - 10% of women aged from 18 to 45 years (7). Although this is generally associated with hyperandrogenemia, one-half of women with mild symptoms have normal androgen levels. While the most common cause is PCOS, many medications can also cause hirsutism. In patients whose hirsutism is not related to medication use, evaluation is focused on testing for endocrinopathies and neoplasms, such as PCOS, adrenal hyperplasia, thyroid dysfunction, Cushing syndrome, and androgen-secreting tumors (8).

Hirsutism is often classified in terms of the distribution and degree of hair growth. We used the Ferriman-Gallwey scale, which is the most widely recognized scoring method that evaluates hair growth in nine androgen-dependent body areas (upper lip, chin, chest, upper and lower back, upper and lower abdomen, thighs, and upper arms). Although it is fairly user-friendly, this scale is limited by its subjective nature and its failure to take into consideration all androgenic areas (e.g., sideburns and buttocks), focal hirsutism, ongoing use of cosmetic measures, and above all, the effect on the patients’ quality of life. To obviate these shortcomings, some experts recommend the term “patient-important hirsutism” to indicate symptoms significant enough to cause distress, irrespective of the severity of clinical findings. We found few similar studies regarding quality of life in Asian women with variable results. The mean age (37.10 ± 9.02 years) in our study was higher compared to a study by Baig et al. (9) in 200 women with hirsutism (26.12 ± 5.83 years) and Kiran et al. (10) in 100 women with hirsutism (24.41 years). The proportion of unmarried women in our study was larger than both of the studies, including Baig et al. (51.5%) and Kiran et al. (65%) (9, 10).

Hirsutism is cosmetically disconcerting and is frequently associated with embarrassment, depression, anxiety, and social withdrawal. Moreover, it may be a cutaneous clue to underlying diseases like metabolic syndrome and PCOS. It has been linked with decreased quality of life as an outcome, including (but not limited to) undermined perception of the feminine identity, by self as well as society (11). In our study, all of the 40 patients had mild hirsutism i.e., F-G score >8 but <15. However, Kiran KC et al. and Hodeeb et al. (12) reported mild hirsutism at 21% and 29%, respectively. The definitions of F-G grading used were different in both of these studies. Thirty percent of our subjects had PCOS, which was higher than in Kiran et al.’s study (23%), whereas lower than in Sharma et al.’s study (8) (38%), which was a study of clinico-investigative profiles of 50 patients with hirsutism. These differences in the severity of hirsutism can be attributed to regional variations among Indian women, as most of the previous studies have been from Northern and Southern India, while ours was set in Western India.

We found an insignificant weak positive correlation between F-G score and DLQI, indicating that hirsutism itself had a negative impact on the quality of life irrespective of severity. On the other hand, this lack of correlation between DLQI and F-G scores may be attributed to the fact that all our patients had mild hirsutism with a narrow interval between minimum and maximum F-G scores. Baig et al. also found that DLQI scores were very close in moderate and severe groups through different criteria used for grading. These results suggest that hirsutism is emotionally disturbing regardless of the degree, and effect on the quality of life is almost equivalent in women with moderate and severe hirsutism. Most of our subjects perceived hirsutism as an impediment to multiple routine activities related to occupation, leisure, and personal relationships. There was no significant correlation between DLQI and variables like age, marital status, occupation, and presence of PCOS, which might be due to small sample size in our study.

Some interesting findings in our study were that F-G score decreased with increasing age, which may be due to the waning hormonal effects. On the other hand, DLQI increased (indicating poorer quality of life), which is contrary to the belief that younger subjects are more cosmetically conscious. We also found higher F-G scores and DLQI in unmarried subjects, which might be due to effect of negative body image as well as social stigma. We observed lower F-G scores and DLQI in housewives compared to working women, but marital status could be a confounding factor here. According to the Rotterdam criteria, PCOS is a constellation of two out of three symptoms and signs, chiefly clinical and/or biochemical signs of androgen excess, oligo/anovulation, and radiological evidence of PCOS (12 or more antral follicles per ovary and/or ovarian volume greater than 10 mL). In our study, PCOS did not influence DLQI, which could be the limitation of a small sample size. Similarly, in the study by Kiran et al. (10), the quality of life was not affected by marital status, religious background, education, and socio-economic status. However, they observed that quality of life of hirsute women with PCOS was poorer when compared to those without this endocrine disorder.

Previous studies have demonstrated a discordance between perception of hirsutism between patients and clinicians, with patients considering their hirsutism as more severe than clinicians. Since it is likely that self-ratings may be more consistently associated with poor quality of life than clinician ratings, it has been recommended that treatment goals take into account patient distress and subjective perceptions of unwanted hair growth (14).

The strength and novelty of our study was the attempt to analyze the contribution of a host of subject-related (age, occupation, and marital status) and disease-related (severity) factors on the effect of hirsutism on the quality of life. A thorough search through published English literature did not yield any similar studies from our part of India. However, it was limited by a small sample size. Hence, we can conclude that hirsutism had a small to moderate effect on the quality of life of our study subjects, affecting both young and old, married and unmarried, working women and housewives equally and independent of severity. The domain of “symptoms and feelings” of our subjects was affected the most. Therefore, compassionate counseling deserves to be an integral part of a holistic management strategy for all women with hirsutism. Moreover, these women should be treated with courtesy and civility during professional and social interactions. Most importantly, it would be useful to conduct multi-centric studies from various parts of the world to gain deeper insight into the impact of hirsutism (addressing both patient and health care provider perspectives) on multiple ethnic and cultural groups residing in diverse regions.

Copyright © 2022, Journal of Skin and Stem Cell. This is an open-access article distributed under the terms of the Creative Commons Attribution-NonCommercial 4.0 International License (http://creativecommons.org/licenses/by-nc/4.0/) which permits copy and redistribute the material just in noncommercial usages, provided the original work is properly cited.
download pdf 3.31 MB Get Permission (article level) Import into EndNote Import into BibTex
Number of Comments: 0