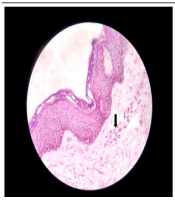 Sunitinib is an inhibitor of tumor angiogenesis and has been used as the first-line drug in metastatic renal cell carcinoma (RCC). Sunitinib attracts attention due to its cutaneous toxicities, which are unusual but can range from benign self-resolving skin rash to severe systemic involvement. Herein, we report a 51-year-old male case with metastatic RCC, clear cell type.

Due to multifocal metastatic disease, the patient was started on tablet sunitinib 50 mg once daily (2 weeks on and 1 week off protocol) with palliative intent. On the 4th day of the second cycle, the case developed multiple reticulate palpable purpuric lesions over bilateral shins without any other constitutional or systemic symptoms, such as fever, joint pain, or abdominal pain. Skin histopathology was consistent with clinical suspicion of cutaneous small-vessel vasculitis. The potential involvement of other organs was ruled out. The lesions resolved completely within 2 weeks through symptomatic treatment with topical fluocinolone acetonide 0.01% cream and emollients.

Sunitinib was continued uninterrupted without other organ involvement or the reappearance of lesions. Therefore, oncology care providers should always be vigilant and thoroughly evaluate any cutaneous toxicities associated with sunitinib, although it is a rare manifestation.

Cutaneous small-vessel vasculitis (CSVV) is a heterogeneous group of disorders that presents with palpable purpuric lesions predominantly over the lower extremities. The etiological differentials include infections, internal malignancies, underlying systemic diseases, and drugs. The list of potential drugs is extensive and comprises antibiotics, nonsteroidal anti-inflammatory agents, antiepileptic drugs, insulin, propylthiouracil, omeprazole, oral contraceptives, and, very recently, tyrosine kinase inhibitors (1). Sunitinib is an inhibitor of tumor angiogenesis and has been used as the first-line drug in metastatic renal cell carcinoma (RCC). It attracts attention due to its cutaneous toxicities, which, although infrequent, can range from benign self-resolving skin rash to severe multisystemic involvement. Sunitinib induced-CSVV is unusual, with only anecdotal case reports available in the literature as the exact incidence is unknown (2). The aim of reporting this case is to highlight a very rare cutaneous adverse effect occurring after the completion of the first cycle of targeted therapy with oral sunitinib in metastatic RCC.

A 51-year-old married male presented with chronic coughs since 4 - 5 months ago. He had already received treatment for pulmonary Kochs for 2 months with no clinical improvement before presenting. Pleural tapping for cytology and biochemistry, pleural biopsy, and contrast-enhanced computed tomographic scan (chest and abdomen) led to a diagnosis of metastatic RCC, clear cell type. After a thorough assessment, the patient was started on tablet sunitinib 50 mg once a day with 2 weeks on and 1 week off protocol. The patient had partial symptomatic relief with the first cycle. On the 4th day of the second cycle, the case developed sudden-onset asymptomatic reddish lesions over both legs, not preceded by any prodromal symptoms or trauma. The patient denied a history of fever, hematuria, or joint or abdominal pain. There was no antecedent drug history other than sunitinib. Dermatological examination revealed multiple erythematous to purple-colored partially blanchable tender, barely palpable papules and plaques coalescing in the reticulate configuration on a background of ichthyotic skin over bilateral shins (Figure 1). The general and rest of the dermatological examinations were normal. A provisional diagnosis of sunitinib-induced CSVV was made. Laboratory investigations, including complete blood count, antistreptolysin O titer, erythrocyte sedimentation rate (ESR), and C-reactive protein (CRP), were within normal limits except hemoglobin (10.5 mg/dL). Hepatic and renal function tests and urine routine analysis were unremarkable. Human immunodeficiency virus enzyme-linked immunosorbent assay, hepatitis B surface antigen, and hepatitis C viral marker were nonreactive. Skin biopsy revealed dermal perivascular lymphocytic infiltrate, vessel wall thickening, and extravasation of red blood cells (RBCs) (Figure 2). A final diagnosis of sunitinib-induced CSVV was reached based on a clinicopathological correlation. The case was successfully treated with topical fluocinolone acetonide 0.01% cream and emollients with complete resolution of all lesions within 2 weeks. Sunitinib was continued uneventfully without any recurrence of skin lesions. 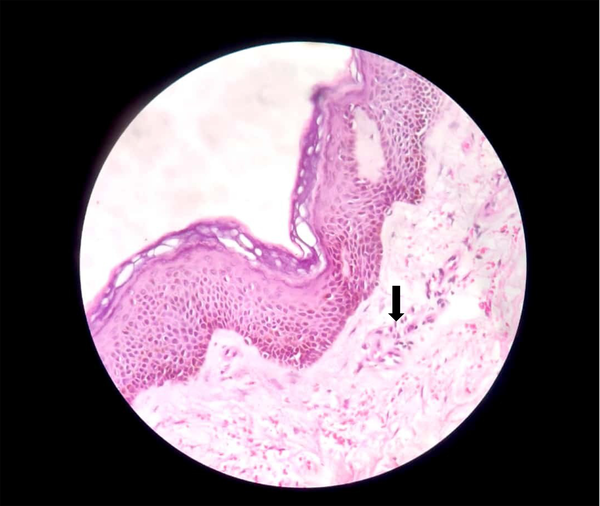 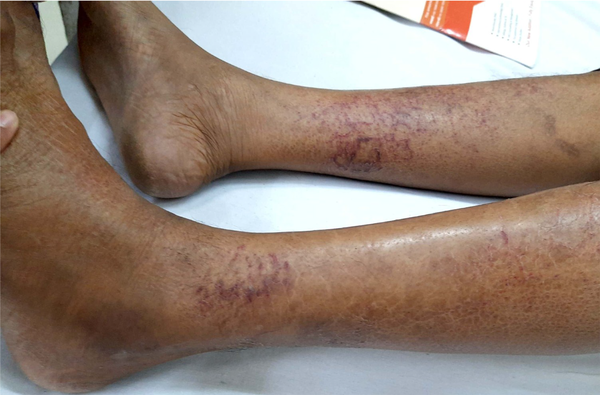 The RCC is the third most common malignancy of the urinary tract and accounts for 3% of all adult malignancies. In a metastatic setting, targeted therapy (recognizing vascular endothelial growth factor (VEGF) as the target) is initiated after assessment for fitness. Several inhibitors of the tyrosine kinase receptors are established in the management of metastatic RCC. Sunitinib was approved by the European Union in July 2006 for advanced or metastatic RCC as the first-line treatment after proving its superiority in randomized phase III trials in comparison to interferon-alpha (2) and gastrointestinal stromal tumors (as the second-line drug after unsuccessful imatinib therapy) (3).

Sunitinib (formerly SU11248) (4) is an oral multitargeted tyrosine kinase inhibitor, which has antiangiogenic and antitumor activities through the selective inhibition of vascular endothelial growth factor receptor 1, vascular endothelial growth factor receptor 2, vascular endothelial growth factor receptor 3, platelet-derived growth factor-alpha, platelet-derived growth factor-beta (PDGFRβ), and tyrosine kinase 3. It prevents neoangiogenesis and tumor metastasis through the VEGF pathway and PDGFRβ expression in pericytes (2). The half-life of sunitinib is approximately 40 hours, and sufficient oral absorption has been noted with a dose of 50 mg once a day for 4 weeks followed by a gap of 2 weeks. The cutaneous adverse effects of protein kinase inhibitors, such as maculopapular rash, hand-foot syndrome, pruritus, bullous dermatitis, purpura, xerosis, and vasculitis, are reported in the literature (5-7). Cutaneous toxicities are attributed to the higher circulating concentration of the drug and a longer half-life in the skin (72 hours) in comparison to 20 - 36 hours in other organs (7). The aforementioned adverse effects are predominantly observed after the 3rd to 4th week of treatment. The aforementioned adverse events are usually reversible and do not require the interruption of therapy unless very severe (4).

Fekete and Fekete and Faye et al. reported vasculitis associated with new anticancer targeted therapies, such as gefitinib, sorafenib, sunitinib, bortezomib, and everolimus (8, 9). The incidence of sunitinib-induced cutaneous adverse effects, such as hand-foot skin reaction (36%) (7), skin rash (13%) (8), xerosis (16%) (10), and yellow discoloration of the skin (28%) (10), is relatively high. Other cutaneous adverse effects, such as hair depigmentation, periorbital edema, skin discoloration, and subungual splinter hemorrhages (5, 7), are not uncommon, although exact incidence is not documented in the literature. Cardiovascular, renal, endocrine, central nervous system, and hematological systems are affected by the long-term use of sunitinib. Cardiotoxicity manifesting as left ventricular dysfunction and hypertension have been reported in 11 - 16% of (9) patients. Hypothyroidism (4 - 16%) (10) is usually observed within the first 2 weeks of therapy, and its incidence increases with therapy duration. Neutropenia and thrombocytopenia are the well-known hematological adverse effects of sunitinib. Gastrointestinal perforations, rheumatoid arthritis, and posterior reversible encephalopathy syndrome (11) are a few rare but serious known systemic adverse effects.

Sunitinib-induced vasculitis ranges from benign self-limiting cutaneous involvement to life-threatening multisystemic involvement. Very few cases of tyrosine kinase inhibitor-associated systemic vasculitis have been reported in the literature to date (12, 13). Massucci et al. reported a case of encephalic leukocytoclastic vasculitis during the treatment of RCC with sunitinib (5). Sunitinib-associated renal vasculitis is rare but of great importance in patients with a single kidney or pre-existing renal dysfunction (2). Screening of renal vasculitis requires the assessment of hematuria and proteinuria by urine routine microscopy, serum creatinine levels, complete blood counts, ESR, CRP, and ultrasound (abdomen and pelvis). Magnetic resonance imaging (with or without contrast) for the screening of encephalic vasculitis reveals a combination of ischemic and hemorrhagic lesions.

Cutaneous vasculitis as a paraneoplastic phenomenon is observed in less than 5% of hematological and solid organ advanced malignancies (5). However, in the present patient, vasculitis did not occur as a presenting feature of metastatic disease but manifested after starting treatment with sunitinib. According to the adverse drug reaction probability scale of Naranjo et al. cited in Rehan et al. (14), the case of this study had a score of +5, indicating a possible association between sunitinib and vasculitis.

Conventional histologic criteria for small-vessel vasculitis include angiocentric infiltrate, destruction of the vessel wall by the infiltrate, and fibrin deposition in the wall/lumen (15). Two out of three criteria are essential for diagnosis. Extravasated RBCs are observed in the dermis in varying numbers, contributing to the purpuric appearance. Leukocytoclastic vasculitis, the most common type of CSVV, is characterized by neutrophils and neutrophilic dust or debris as the predominant feature (5). The infiltrate might include other immune cells, such as lymphocytes (as observed in the present case) and granulomas, which can be induced by bacterial and viral infections, drugs, and malignancy. The most common finding is palpable purpura. No other clinical signs or symptoms and laboratory findings possibly related to infections or inflammatory diseases were observed in the present case (16).

The management of sunitinib-induced CSVV comprises topical and systemic corticosteroids. Generally, lesions completely resolve in 6 - 12 weeks. The interruption of therapy is rarely indicated, particularly in the event of internal organ involvement or extensive recalcitrant cutaneous lesions.

With the growing use of protein kinase inhibitors, such as sunitinib, rare dermatological adverse effects, such as CSVV, might be encountered more frequently. These manifestations should be promptly diagnosed and addressed vigilantly, accompanied by meticulous screening for internal organ involvement, which, although infrequent, might unfavorably affect the management strategy and prognosis.

Copyright © 2022, Journal of Skin and Stem Cell. This is an open-access article distributed under the terms of the Creative Commons Attribution-NonCommercial 4.0 International License (http://creativecommons.org/licenses/by-nc/4.0/) which permits copy and redistribute the material just in noncommercial usages, provided the original work is properly cited.
download pdf 7.04 MB Get Permission (article level) Import into EndNote Import into BibTex
Number of Comments: 0