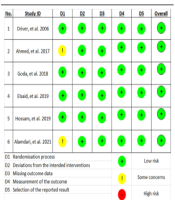 Diabetic foot ulcer (DFU) remains a devastating and prevalent complication of diabetes, which leads to significant morbidity, mortality, and economic implications. Outcomes of DFU management are still unsatisfactory, warranting innovations to improve them. One accessible and promising potential for treating DFU is autologous platelet-rich plasma (PRP), a blood product abundant in bioactive molecules. Platelet-rich plasma has been used in other fields of medicine to treat various conditions.

While there is substantial research studying the use of PRP for DFU, these studies are regarded as having flaws in methodology. Hence, this systematic review aims to bridge the knowledge gap by only including randomized controlled trials (RCT).

After sifting through various databases, six studies were included. This review focused on specific outcomes, namely percentage of patients with healed wounds, wound size, and time to closure.

The authors found that PRP has performed well with regards to healing DFU wounds with a high rate of healing, which leads to a shorter time to wound closure.

Currently, diabetic foot ulcer (DFU) is still a devastating complication of diabetes, affecting up to half of all type 1 and 2 diabetes patients. Ultimately, this condition leads to a significant contribution to patient morbidity and mortality (1). In the United States alone, an immense amount of US $176 billion is estimated to be directed for treating DFU. This is approximately one-third of the total cost of diabetic care in 2012. Despite these high costs, outcomes in DFU care are still unsatisfactory (2). Recurrence is a formidable challenge in DFU management, as an estimated of 40% of patients experience recurrence within one year of healing, 60% within three years, and 65% within five years. As such, innovations are warranted further to improve outcomes in DFU management.

One accessible and promising potential for treating DFU is autologous platelet-rich plasma (PRP), which is a blood product abundant in bioactive molecules, each with various functions. Among the proteins present in PRP are platelet-derived growth factor, vascular endothelial growth factor, and interleukin-1 receptor antagonist. These proteins are responsible for cellular proliferation, angiogenesis, anti-inflammatory properties, and others. Furthermore, PRP is especially promising for treating DFU as diabetic PRP has been shown to contain increased growth factor concentration (3). Aside from treating DFU, it has also been utilized for rotator cuff tears (4), corneal regeneration (5), alopecia (6), skin ageing,6 diabetes mellitus (7), and even Coronavirus disease 2019 (8, 9).

While there is substantial research studying the use of PRP for DFU, these studies are regarded as having flaws in methodology. Hence, this systematic review aims to bridge the knowledge gap by only including randomized controlled trials (RCT).

The authors identified records from databases, namely PubMed, Scopus, and ScienceDirect. The keywords used in all databases are (Platelet-rich plasma) AND (Diabetic foot ulcer). Automation tools were also used to sift through other types of records such as review articles, books, etc.

The authors included randomized controlled trials studying autologous PRP for the treatment of DFU. Studies were excluded if fulfilling any of the following criteria: (1) Animal studies; (2) inaccessible full-text articles; and (3) articles not in English. Subsequently, all the obtained articles were filtered in the screening process.

All articles were independently reviewed based on the PRISMA guideline. The screening process was done starting from the title, abstract, and continued with full text screening of selected studies to exclude studies that met any of the exclusion criteria. All selected studies were finally validated to ensure eligibility for the next step.

All authors extracted the available data from included studies. The following data extracted from each study are shown in Table 1. The outcomes obtained are ratio of participants with healed wounds at endpoint, wound size, and time to wound closure.

The course of study inclusion for the systematic review is described in Figure 1. Each study was further assessed for its methodological quality by using the Risk of Bias 2 (RoB 2) tool by Cochrane, which appraised for five quality parameters: Randomization processes, deviations from intended interventions, missing outcome data, measurement of outcome, and selection of reported results (17). The result of the quality assessment is described in Figure 2. 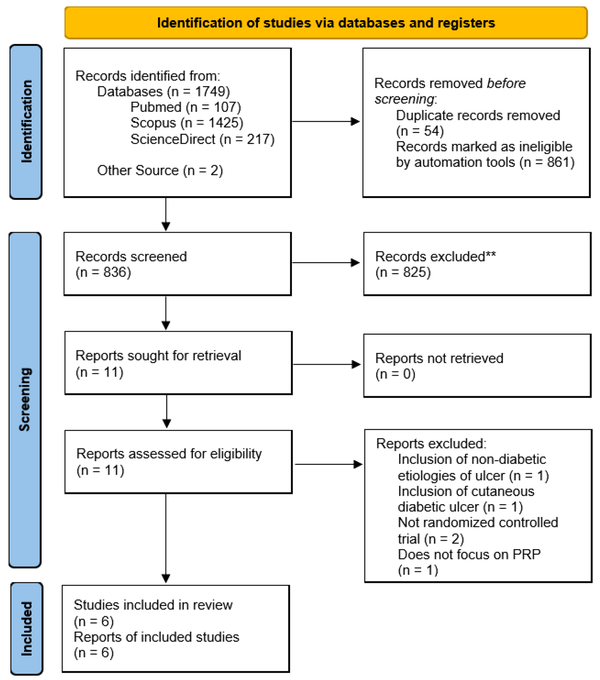 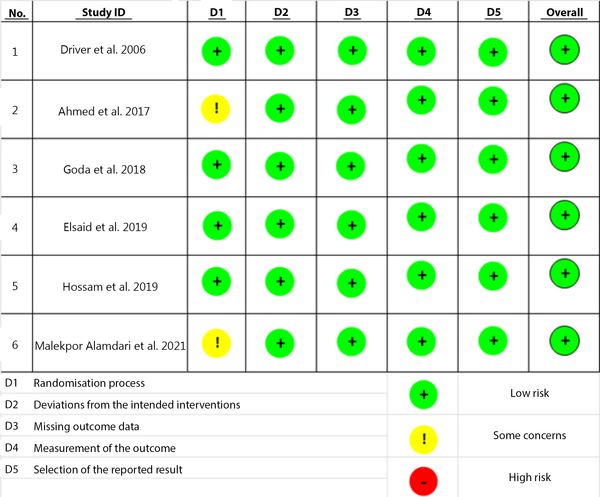 Risk of bias (RoB) 2 tool. Out of all the studies, two studies indicated some concerns with regard to its randomization process. The other four studies reported a low risk of methodological bias.

Baseline characteristics of the study population comprising sex, age, hemoglobin A1c (HbA1c), and wound size were collected. Furthermore, specifications regarding tot the intervention on control treatment administered were also obtained. Relevant outcomes of the incorporated studies, which are percentage of patients with healed wounds, wound size, and time to closure, are summarized in Table 1.

The authors noticed that not all the included studies collected patient HbA1c levels. Although blood work parameters, such as hemoglobin, albumin, platelet, and HbA1C, in most studies do not find a statistically significant change after PRP administration (13), the authors believe that it is still important to obtain baseline patients’ HbA1c as a predictive biomarker to wound healing, which may give a better picture as to the patient’s wound healing rate (18).

In most studies, the administered PRP is in gel form, while one study administered PRP as an intralesional injection. The mentioned study also administered platelet-poor plasma (PPP) gel to patients in the treatment arm. This resourceful strategy to improve outcomes is interesting, as PPP is a plentiful byproduct of PRP processing with its own set of benefits and uses (19). Studies in the future should consider experimenting with PRP-PPP in the management of DFU to avoid wasting precious resources.

Currently, optimal activator concentration is still unknown. However, careful selection of activator is important. As shown by Cavallo et al. (20), the choice of PRP activator is crucial as it affects the bioactive molecules released during platelet degranulation. Calcium salts, bovine/autologous thrombin, or a combination of both is usually the choice activator in PRP studies. Different activators and concentrations may be needed for different purposes, and the most advantageous activator and concentrations for each need should be addressed in future studies.

Regarding DFU wound healing, the included studies have consistently found a larger proportion of patients treated with PRP to experience complete wound healing. For example, the study by Hossam et al. (15) demonstrated significant healing, with 95% of patients in the PRP group already at wound closure by the sixth week of the study. This contrasts with the results of the control group, in which only 77.8% of patients achieved wound closure in the ninth week. According to our findings, the study with the seemingly least satisfactory result of complete wound healing was the one done by Elsaid et al. (14), in which only 25% of the patients in the treatment group completely healed at the end of the study, while no ulcer in the control group healed. However, it is important to note that mentioned results were statistically significant, and the other 67% of participants in the PRP group were in partial healing, as opposed to the 58.3% in the control group. Possibly, if followed up at a later time, more patients from the PRP group would achieve complete healing. Nevertheless, this result still demonstrates a faster wound closure in the PRP group for a given time.

From the included studies, ulcers treated with PRP are significantly at smaller sizes at the end of the observation period except for one study. While Hossam et al. (15) found that wounds treated with PRP end up smaller than control, the result was not statistically significant. This is interesting as it appears that PRP does not improve wound healing size, but it achieves wound closure at a faster rate (although the control group did eventually “catch-up”). Maybe, a combination of PRP and PPP in appropriate ratios may improve both wound healing rate and wound size in the future. In the study by Goda et al. (13), one can also infer similar results, with the PRP group having a head start in wound healing rate. Ahmed et al. (12) also found that the healing rate/week in cm2 of the PRP group was significantly superior up to eight weeks into the study, where the healing rate remained higher but no longer statistically significant.

The two studies that accounted for time to wound closure reported similar outcomes. Both studies reported a time to wound closure in about 55 days in the PRP group compared to the control group, which achieved wound closure in about 80 days (11, 16). In a similar parameter, Elsaid et al. (14) found that the time required to reach maximum healing was significantly shorter in the PRP arm of their study (6.3 ± 2.1 vs. 10.4 ± 1.7 weeks, P < 0.0001). In a single-arm trial by Mohammadi et al. (21), the mean time needed to attain > 90% wound area healing was 8.7 ± 3.9 weeks. Similar to Ahmed et al. (12), they found the healing rate of the wound treated with PRP was 0.7 cm2/week.

Another outcome that the authors did not assess, a study in France also demonstrated the cost-effectiveness of PRP treatment compared to standard treatment in patients with chronic-high risk DFU (22). Similar results in Spain have also been demonstrated (23). This makes PRP an attractive and economic alternative to current DFU care, which carries a hefty price tag.

From this systematic review of RCTs, the authors found that PRP has performed well with regard to healing DFU wounds with a high rate of healing, which leads to a shorter time to wound closure. Future research should be done to assess cost-effectiveness of PRP treatment for DFU in other countries as well as in other continents. Additionally, the authors also recommend that the effect of different activators and concurrent usage of PPP gel with PRP to treat DFU should be studied further. With the accumulation of evidence over time, the authors also encourage a meta-analysis to be conducted in the future.

Copyright © 2022, Journal of Skin and Stem Cell. This is an open-access article distributed under the terms of the Creative Commons Attribution-NonCommercial 4.0 International License (http://creativecommons.org/licenses/by-nc/4.0/) which permits copy and redistribute the material just in noncommercial usages, provided the original work is properly cited.
download pdf 1.01 MB Get Permission (article level) Import into EndNote Import into BibTex
Number of Comments: 0