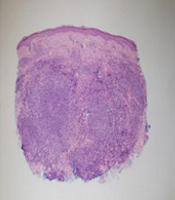 Scalp Erythema and Nodules: Would You Think of Primary Cutaneous Follicle Center B-Cell Lymphoma if a Biopsy is Inconclusive?

The incidence of primary cutaneous B-cell lymphomas (CBCL) is about 3 new cases per year per million (1). As a result, we would consider it as rare skin cancer that we should contemplate in any skin lesions that are not responding to primary therapies. We discuss a case of primary cutaneous B-cell lymphoma with a negative primary pathology report and two recurrences following a diagnosis and primary treatment.

A 71-year-old gentleman with a history of melanoma presented with nodular lesions on his scalp. The nodules were biopsied, and pathology demonstrated an atypical lymphoid infiltrate. Initially, the lesions resolved with no therapy. However, they progressed 11 months later. Lesions were pruritic but itchiness improved after two weeks of topical hydrocortisone treatment. He denied fever, anorexia, weight loss, or night sweats. On examination, 3 bigger nodular lesions were measuring 1 cm and 4 smaller lesions on the forehead (Figure 1). The lesions were hard in texture on an erythematous base, with no tenderness. There were no hepatosplenomegaly or lymphadenopathy. Two punch biopsies were taken. Both samples had similar histologic features. There was a dense dermal inflammatory infiltrate, which was compromised of a mixture of small mature-appearing lymphocytes, larger transformed appearing lymphocytes, and histiocytes. They were arranged in a vaguely nodular pattern. No involvement of the epidermis was seen (Figure 1). Numerous immunohistochemical stains are prepared, along with appropriately reactive control tissues. There was a notable population of B cells, as highlighted with CD20, arranged into small aggregates. The cells also coexpressed CD10, BCL-6, LMO2, HGAL, and CD23. By in situ hybridization stains, there was a predominance of kappa light chains over lambda, with monoclonal immunoglobulin heavy chain, consistent with primary cutaneous follicular center lymphoma. The histologic and immunohistochemical results support the diagnosis of CBCL. Considering all information, a primary cutaneous disease was favored over a systemic disease with secondary skin involvement. A complete workup did not detect any systemic involvement. He obtained electron beam radiation treatment with satisfactory results.

Afterward, 2 new small nodules seemed to have developed on his forehead. A punch biopsy was taken. The report was consistent with a cutaneous lymphoma similarly. Since the new lesions were very small, they were excised as opposed to more radiation. Despite receiving the mentioned treatments, he continued to have recurrences. Therefore, the patient started on rituximab including induction, consolidation, and maintenance therapies. The patient responded quickly during induction therapy and has remained in remission with this treatment.

Copyright © 2022, Journal of Skin and Stem Cell. This is an open-access article distributed under the terms of the Creative Commons Attribution-NonCommercial 4.0 International License (http://creativecommons.org/licenses/by-nc/4.0/) which permits copy and redistribute the material just in noncommercial usages, provided the original work is properly cited.
download pdf 2.92 MB Get Permission (article level) Import into EndNote Import into BibTex
Number of Comments: 0