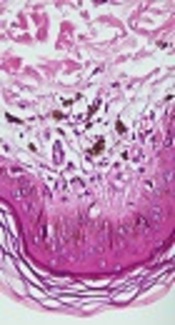 Lichen Planus Distributed Along the Lines of Blaschko: A Case Report

This study presents a fairly uncommon form of lichen planus following the lines of Blaschko. The lesions were in a whorled pattern on the right side of the trunk with extension to infra-mammary fold and discrete red-to-violaceous lichenoid papules without linear distribution on the left side of the trunk.

A healthy 31-year-old female attended the clinic of the current study with a dermatosis of 3 years duration. She had no significant personal or family history. Physical examination revealed confluent dark-brown macules creating linear streaks in a whorled pattern that followed the lines of Blaschko on the right side of the trunk with extension to the infra-mammary fold (Figure 1). The lesions were not confined to the right side and the other side was also involved, yet the pattern of involvement was different. With closer inspection, discrete red-to-violaceous lichenoid papules, primarily follicular with minimal scaling without linear distribution were obvious on the left side of the trunk (Figure 2). Itching was not a major complaint because the patient had previously used potent topical corticosteroids for several months. Treated areas, especially on the right side, had become flat with residual hyperpigmentation. Typical white plaques with a lacy surface pattern were seen on both sides of the buccal mucosa. Scalp, nails, and genital mucosa were not affected. Lab results for HBS Antigen and HCV Antibody were negative. Histologic examination of the lesions on the trunk revealed moderate melanin incontinence and some evidence of a late lichenoid reaction, such as focal hydropic change of basal epithelial cells and aggregation of cytoid bodies in the papillary dermis (Figure 3). Moderate Melanin Incontinence and Some Evidence of a Late Lichenoid Reaction, Such as Focal Hydropic Change of Basal Epithelial Cells and Aggregation of Cytoid Bodies in the Papillary Dermis.

Lichen planus is a benign acquired inflammatory dermatosis that affects skin, mucous membranes, hair, and nails. The pathogenesis of this disorder is not exactly understood, however several etiologies have been proposed, including viruses, drugs, vaccines, bacteria, and contact with allergens autoantigens. The main effector cells in the pathogenesis are T-lymphocytes (1).

In the English literature, linear LP and blaschkoid LP have been used either as synonyms or the later as a subgroup of the former; in any case, such lesions follow the lines of Blaschko. Alfred Blaschko, a German Dermatologist, in 1901 was first to describe a pattern of skin disease in unusual lines, based on various congenital and acquired dermatoses. Blaschko’s lines are not justifiable and could have any cutaneous pattern, such as dermatomes, Langer's lines, Voight’s lines, embryonic clefts, pigmentary demarcation lines, or any nervous, vascular or lymphatic structures (2). These lines are imperceptible and may become obvious in certain conditions, such as pigmentary disorders (nevic lesions), X-linked genetic skin disease (Incontinentia pigmenti), acquired inflammatory skin disorders (LP, lichen striatus), and chimerism (3). It seems that during early embryonic development, cells migrate to certain areas of the skin, and if a post zygotic mutation occurs, Blaschko’s lines represent boundaries between normal and mutant cells. This mutation makes a clone of cells susceptible to certain dermatosis, genetic or acquired like LP (4).

There have been some reports of blaschkoid LP in the English literature. The five most recent case reports after 2007 include, a 77-year-old male with linear and whorled pattern of LP on the right side of his body that ended abruptly at the midline (5), a 22-year-old female with a unilateral blaschkoid LP that involved her left shoulder, arm and forearm recurring in 3 successive

Although cutaneous LP occurs in up to 1% of the general population, blaschkolinear LP is much less common and its estimated prevalence is approximately 0.24% to 0.62% of all patients with LP (2, 9). Differential diagnosis of LP with a blaschko linear pattern consists of epidermal nevi, lichen striatus, linear psoriasis, inflammatory linear verrucous epidermal nevus, Blaschkitis, linear lichen nitidus, linear graft-versus- host disease and linear lichenoid drug eruption that can be differentiated based on history and clinical or pathological evaluation (2, 4, 6).

The clinical appearance of the skin lesions in the patient suggested the possible diagnosis of lichen planus, so to confirm the diagnosis a biopsy was performed. As cited above, histological examination revealed melanin incontinence and hydropic change of basal layer that are compatible with a late stage or partially-treated LP. Primary microscopic findings in LP consist of a band-like lymphohistiocytic infiltrate at the dermo epidermal junction, liquefactive degeneration of the basal cell layer, the presence of civatte bodies, irregular acanthosis, and hyperorthokeratosis . Histologic findings in blaschko linear LP and ordinary LP are identical (1, 2, 7). Although these changes were not observed in the current patient, considering the fact that the patient referred after 3 years, the typical appearance of the lesions along with a lichenoid reaction pattern and pigment deposition in superficial dermis could support the diagnosis of LP. The major complication of blaschko linear LP was pigmentary changes as in the current case. Here, the study reports an uncommon form of lichen planus that is rather rare and every dermatologist should keep in mind observing a dermatosis with a blaschko linear pattern of distribution. Another interesting feature of the patient was that the lesions of lichen planus followed the lines of Blaschko on one side of the body, yet didn’t have linear or Blaschkoid pattern on the other side.

To the best of our knowledge, this is the first case report of the lesions of Blaschkoid lichen planus on one side of the body and scattered lesions of lichens planus on the other side simultaneously.

Copyright © 2016, Journal of Skin and Stem Cell. This is an open-access article distributed under the terms of the Creative Commons Attribution-NonCommercial 4.0 International License (http://creativecommons.org/licenses/by-nc/4.0/) which permits copy and redistribute the material just in noncommercial usages, provided the original work is properly cited.
download pdf 4.55 MB Get Permission (article level) Import into EndNote Import into BibTex
Number of Comments: 0