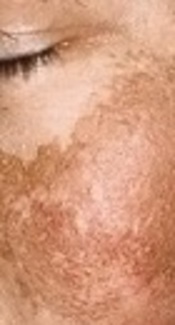 The Relationship Between Herbal Anticoagulants and Melasma

Melasma is a common pigmentary disorder with the incidence of 1.5% - 33.3% worldwide. Targeting the vascular component in melasma lesions may decrease the melanocytic stimulation. Herbal anticoagulants can serve as effective candidates for melasma treatment.

The evidence was gathered in this study by evaluating vascularization as an etiology of melasma and considering the role of herbal anticoagulants in natural vascular treatment. Databases such as PubMed and Scopus were screened and the following keywords were searched: melasma, vascularization, pigmentation, and herbal anticoagulant. These subjects were further investigated in traditional textbooks such as the canon of medicine by Avicenna and Alhavi by Razi. At the end, the results were discussed.

The use of anticoagulants can reduce the clot formation and lower the VEGF release. In this way, vascularization will be reduced, consequently leading to a decrease in melasma occurrence. The researchers of the present study went over the herbal components that were effective for treatment of melasma and found that most of them consisted of anticoagulants such as coumarin.

The effect of herbal anticoagulants (administered orally) on melasma should be evaluated clinically and their combination with topical treatments is suggested.

Melasma is a common pigmentary disorder. Its treatment often results in unsatisfactory outcomes and hence it remains a challenge. Melasma affects about 1.5% - 33.3% of people. The main pathogenesis of melasma is not completely known, though vascularization is considered as a source of development. The treatments for this disease include topical agents, laser, and chemical peels. These treatments are expensive and come with various side effects. Targeting the vascular component in melasma lesions may decrease the melanocytic stimulation. Unfortunately, topical treatment has received greater attention in the medical community, which has negatively affected the attention given to systemic therapy, such as the role of herbal anticoagulants in melasma treatment. Hence, studies on the treatment of melasma demonstrated a necessity for conducting further research on the topic of systemic therapy. The researchers suggested producing some anticoagulant herbs in the form of standard drugs.

Melasma is a common pigmentary disorder. Its treatment often results in unsatisfactory outcomes and hence it remains a challenge (1). Melasma affects about 1.5% to 33.3% of people (2). The main pathogenesis of melasma is not completely known (3) although vascularization is considered a source of development (4). In other words, in the region inside the melasma lesion, vascularization of around 46% is found, which is higher than the vascularization on normal skin (5). Vascularization is caused by angiogenesis (creation of new vessels) as a consequence of regulators such as vascular endothelial growth factor (VGEF). High vascular endothelial growth factor could be a possible reason for the increase of vascularization in melasma lesions (2).

Avicenna and Razi were the first scientists to determine the role of vascularization in melasma (6). The treatments for this disease include topical agents, laser, and chemical peels (1). These treatments are expensive and have various side effects (7). Melasma poses extra challenges as it remains resistant to treatment (8). Targeting the vascular components in melasma lesions may decrease the melanocytic stimulation (9).

There is a lack of attention paid to systemic therapies such as the treatment of melasma through the consideration of vascularization as the unknown pathogenesis causing this disease. The researchers of the present study have tried to find the role of anticoagulants in vascularization treatment in melasma according to the ancient perspectives on the topic as well as in terms of new scientific findings.

Elevated vascular endothelial growth factor (VEGF) in keratinocytes has been imagined to play a role in increasing vascularization of melasma. On the other hand, biopsies from melasma area have shown increases in VEGF expression. Stimulation of the angiogenesis leads to the release of mediators such as VEGF causing melanocyte activation and melanin production. Treatment of vascular melasma is so difficult and lasers can worse melanogenesis due to dermal inflammation (1). VEGF is released from platelets during clot formation (10). The clot releases VEGF and VEGF increases the vascularization, which elevates the production of melanin and, as a result, melasma.

Targeting the vascular component of melasma lesions may decrease melanocytic stimulation (9). Ginseng (11) and salicylic acid (12, 13) are useful in treating melasma although care should be taken to ensure that Ginseng is not accompanied by anticoagulants (14).

It was observed that Pinus pinaster extract decreases blood clotting and it is effective in melasma treatment (15).

According to the study by Mokabberi nejad, consuming certain herbs, such as aftimun (Cuscuta epithymum), celery (Apium graveolens), fig (Ficus carica), cardamom (Elettaria cardamomu), parsley (Petroselinum crispum), and black myrobalan (Terminaliachebula), is effective in treatment of melasma (16). Based on the database findings, all of these herbs include coumarin (17-21) Coumarin is a parent compound from which warfarin, a vitamin K antagonist, is derived. Coumarin is clinically used as an anticoagulant and it is administered orally (22).

In addition, in traditional textbooks, Avicenna and Razi had prescribed some herbs to be administrated orally for the treatment of melasma, such as Cicer arietinum, Ferula persica, Cucumis melo (23), and Artemisia absinthinum (24). Once again, the effective ingredient in all of these herbs was coumarin (25-28).

Applying herbal anticoagulants in the treatment of melasma was discovered many centuries ago. It had been considered a subject of interest by Iranian scientists over one thousand years ago. In addition, comprehensive evaluation of ancient textbooks is necessary to comprehend the interest shown by Razi and Avicenna toward prescribing herbs that decrease blood clotting.

Another important point to be noted is that more attention is directed towards the various topical treatments of melasma resulting in the ignorance of systemic therapy, including oral herbal anticoagulants.

The aforementioned hypothesis assumed the effectiveness of systemic therapy (which included oral herbal anticoagulants) in addition to topical treatment for the treatment of melasma. The confirming evidence is as follows:

Recent studies on patients with melasma showed a relationship between the disease and vascularization. The main pathogenesis of vascularization, however, is not well understood (29).

Evaluating ancient textbooks on Persian medicine showed that the scientists had prescribed herbs, including anticoagulants, for melasma treatment in the past (23, 24).

Research on the aforementioned prescribed herbs in ancient Persian textbooks demonstrated the symptom of decreased blood clotting (anticoagulant) because of their consumption, which will lead to less VEGF secretion and attenuated vascularization.

In melasma treatment today, focus on systemic therapy has decreased; topical treatment is frequently used due to its excessive advertisements. In spite of melasma relapses following the cessation of topical treatment, it does not easily recur after removing the main cause of the disease.

Considering the high prevalence of melasma (1.5% - 33.3%), vascularization as a source of development in the pathogenesis of the disease (46%), and the high cost of its topical treatment, researchers are considering systemic therapy, including the use of oral herbal anticoagulants, in addition to topical medicines for the treatment of melasma.

Considering the aforementioned points and with regard to the hypothesis, the researchers make the following suggestions:

Extensive clinical trials need to be conducted to determine the effect of herbal anticoagulants (administered orally) on melasma.

Systemic therapies should be conducted alongside topical treatment for the treatment of melasma in order to prevent its recurrence.

Hence, the researchers suggest producing the anticoagulant herbs mentioned above in the form of standard drugs.

Copyright © 2016, Journal of Skin and Stem Cell. This is an open-access article distributed under the terms of the Creative Commons Attribution-NonCommercial 4.0 International License (http://creativecommons.org/licenses/by-nc/4.0/) which permits copy and redistribute the material just in noncommercial usages, provided the original work is properly cited.
2019-10-10 12:52:46
very useful article and informative about herbal product.