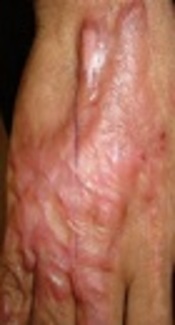 This quasi-experimental study was performed among 33 patients visiting dermatology clinics of two referral teaching hospitals during 2013 - 2014.A lesion of these patients was divided in to two equal parts, one half was injected with triamcinolone acetonide at a dose of 10 - 20 mg/mL, and in the combination treatment, we administered ablative fractional CO2 laser treatment (level: 15, point of shot: 5, PW: 5, pitch: 0.5; Unixel, Korea) with topical triamcinolone acetonide in the other half. The settings of the laser device for each session were set according to the thickness of the scar. Immediately after laser treatment (in the first two seconds) and up to one week later, the triamcinolone acetonide 0.1% cream was applied twice a day. Each patient underwent 3 - 5 treatment sessions of laser treatment at 4-week intervals for one lesion. One hour before each session, the local anesthetic, lidocaine-p gel, was administered around the lesion.

Despite the advancements in wound treatment and modern surgical modalities, hypertrophic and keloid scars are common after trauma and burns (1). Hypertrophic and keloid scars are some abnormal wound healing forms resulting from fibroblasts proliferation and excess collagen synthesis (2). Both lesions are seen in under-tension regions, whereas keloids may also develop in tension-free regions (3).

Cosmetic problems, physical immobility, deformity, movement restrictions, pain, and itching are bothersome issues for patients with hypertrophic and keloid scars (4). As of yet, there is no consensus regarding the appropriate treatment for these lesions, but different modalities with various transient outcomes are available leading to a challenge for physicians. Although prevention is the best option, in developed cases, multimodal treatments may be effective.

Corticosteroids are usually used to control inflammation and reduce the bulk of hypertrophic scars. One of the common treatments for these scars is intralesional steroid injection leading to the inhibition of alpha-2-Macroglobulin and subsequent collagen destruction (5). This method would result in decreased recurrence of keloid and hypertrophic scars (6). On the other hand, the use of lasers, especially the ablational ones, and recent technological advances may be another good solution for the treatment of these scars.

Laser treatment results in deep destructions, leading to cascade induction of heat shock proteins, and subsequently, accelerated healing process, delayed collagen synthesis, and regeneration (1). Also, lasers result in better penetration of drugs and other medications (7, 8). Since combination therapy may result in synergistic effects and regarding the lack of studies on this issue, the current investigation was performed to determine the comparative effects of ablative fractional CO2 laser plus triamcinolone acetonide cream versus intralesional injection of triamcinolone acetonide in the treatment of hypertrophic and keloid scars.

This quasi-experimental study was conducted to compare the effects of ablative fractional CO2 laser plus triamcinolone acetonide cream 0.1% versus intralesional injection of 10 - 20 mg/mL of triamcinolone acetonide (larger amounts for thicker and larger lesions and the lower amounts for smaller and thinner scars) in the treatment of hypertrophic and keloid scars in patients visiting dermatology clinics of two referral teaching hospitals during 2013 - 2014. Thirty three patients were recruited for the study. The exclusion criteria were consumption of oral retinoids during the past six months, active infection, and suspicious lesions for malignancy. There was no randomization, and each one of the 33 patients was considered as control for her/himself.

Each patient received combination therapy (intralesional steroids with laser) for one lesion. Laser therapy was administered in 3 - 5 treatment sessions at 4-week intervals. Before each session, the local anesthetic, lidocaine-p gel, was applied around the lesion. In another lesion of these patients, triamcinolone acetonide was injected at a dose of 10 - 20 mg/mL. Ablative fractional CO2 laser (level: 15, point of shot: 5, PW: 5, pitch: 0.5; Unixel, Korea) settings were for each session were set according to scar thickness in the combination group. Then, immediately after laser treatment (in first two seconds) and up to one week later, triamcinolone acetonide 0.1% cream was used twice a day. After the procedure, the region was cooled with an ice bag for 10 minutes and left without dressing. Also, a moisturizing cream was used three times a day for several days up to healing of the lesion. During this time interval, physical sunscreen and zinc oxide cream were used and sun exposure was inhibited. Also, washing was performed with dry skin pan.

The patients were followed up for one month. Photographs (baseline and one month after the completion of the treatments) of the lesions were assessed by two blinded observers and the patient (Figure 1). Initially, the baseline and final photographs were distinguished by each observer and then improvement in the general appearance of the scars, dyschromia, hypertrophy, and texture was evaluated according to modified Manchester quartile score (1), including 0 for less than 25% improvement, 1 for 25 - 50% improvement, 2 for 50 - 75%, and 3 for more than 75%. The mean score of each parameter was determined to calculate the final score.

To analyze the data, independent-samples t-test was run in SPSS, version 18. P value less than 0.05 was considered statistically significant. 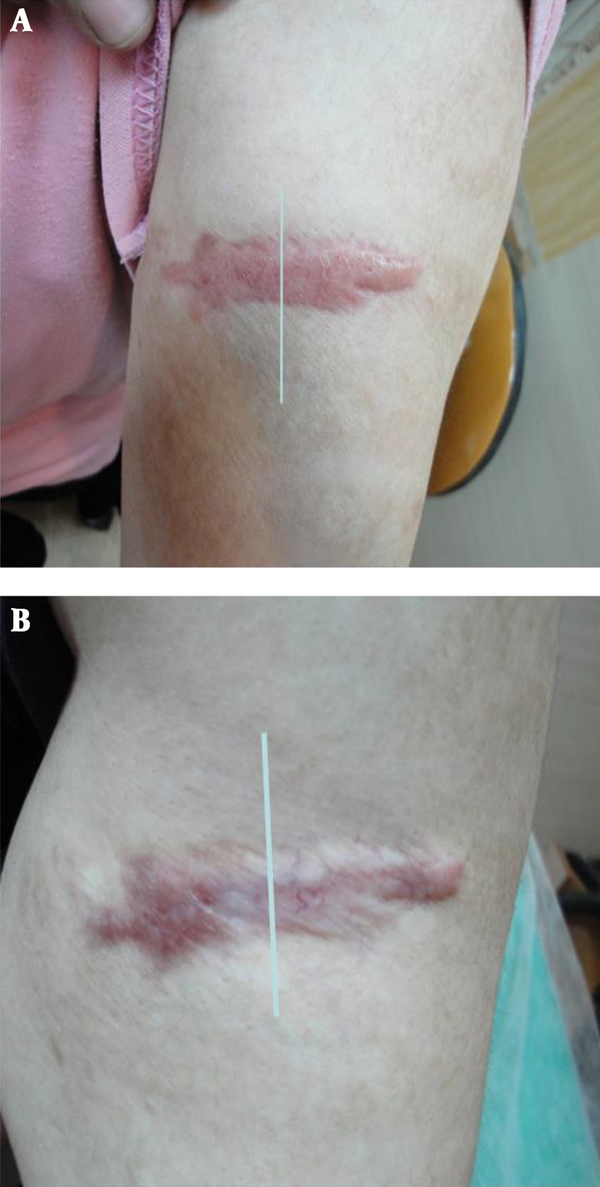 A, before treatment; B, after treatment.

The treatment of scars is challenging and needs multimodal therapies (1). The use of topical corticosteroids after laser therapy results in homogenous penetration of the drug into the skin lesion without pain. However, intralesional corticosteroids injection is painful with not-homogenous drug level in the lesion. Our study was performed to determine the comparative effects of ablative fractional CO2 laser plus triamcinolone acetonide cream versus intralesional injection of triamcinolone acetonide in the treatment of hypertrophic and keloid scars.

In this study, we found that texture and dyschromia showed more improvement as a result of local triamcinolone plus laser therapy, but intralesional injection of triamcinolone was more effective on hypertrophy and general appearance of the scars. Laser was first used by Alster in 1993 for the treatment of keloid (7), and it was noted that erythema, thickness, and texture showed good response to pulse dye laser (PDL), which is line with our findings. Also Waibel et al. (1) demonstrated good response of texture in patients under treatment with laser plus triamcinolone, but in their study, dyschromia did not show good response to this treatment. However, they had no comparison groups such as the intralesional injection of triamcinolone group in our study. The total improvement score in their study was 2.73 versus 1.53 in our study.

Issa et al. (9) reported relatively complete response after radiofrequency laser therapy with low rate of local atrophy and irregular appearance. Laser plus triamcinolone treatment was more effective on texture and homogenous status in our study. Additionally, they performed another study (10) and found that the combination of retinoids and laser was also effective, which is in congruence with our findings. Alster et al. (11) reported good efficacy of PDL in the treatment of hypertrophic scars. They reported that intralesional corticosteroid injection plus laser had no additional effects, which is not in congruence with our results.

Asilian et al. (4) reported that the combination of triamcinolone, 5-Fluorouracil, and PDL in the treatment of keloid and hypertrophic scars is a good therapeutic option. It was accompanied with high satisfaction rate among patients and good appearance. Manuskiatti et al. (6) revealed that PDL results in good texture compared with intralesional corticosteroids. However, low power of their study resulted in lack of significant differences. Hypertrophy and general appearance showed similar results as our study. They reported phagocytosis inhibition by corticosteroids, less migration of cells, vasoconstriction leading to less nutritional and oxygen supply, and anti-mitotic effects on fibroblasts and keratinocytes. The mechanism of action of laser therapy is micro-injury of the vessels in wound. An important advantage of fractional lasers is the ability to be modified for skin canals with various depths and densities.

Previous studies (3, 12-14) demonstrated a 48-hour interval for re-epithelialization and occlusion of the openings of laser treatment. However, physicians usually use topical treatments at the first two minutes to achieve the desired inflammatory cascade and better drug-delivery by the laser system. Stephanides et al. (15) reported that the rotational use of PDL laser along with corticosteroids had good response after failure of intralesional triamcinolone injection, which indicates the synergistic effects of these treatments.

In sum, local corticosteroids plus fractional laser therapy is more effective than intralesional injection of corticosteroids for the improvement of dyschromia and texture of hypertrophic and keloid scars. However, intralesional injection of triamcinolone was more effective on general appearance and hypertrophy. Thus, in non-homogenous lesions with dyschromia the use of local corticosteroids plus fractional laser is recommended. However, further studies should be performed with various designs such as clinical trials and rotational investigations to achieve more definitive results.

Copyright © 2018, Journal of Skin and Stem Cell. This is an open-access article distributed under the terms of the Creative Commons Attribution-NonCommercial 4.0 International License (http://creativecommons.org/licenses/by-nc/4.0/) which permits copy and redistribute the material just in noncommercial usages, provided the original work is properly cited.
download pdf 2.25 MB Abstract XML Get Permission (article level) Import into EndNote Import into BibTex
Number of Comments: 0