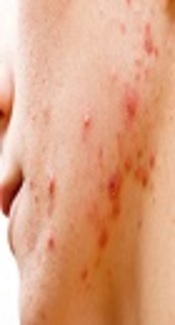 Role of insulin-like growth factor 1 (IGF1) and contributing cancer risk has been shown in many studies. Hence, this study was performed to determine the serum level of IGF-1 in patients with acne vulgaris in comparison with healthy subjects.

The current study was a case-control assessment performed on a sample of 102 subjects, including 51 known cases of acne and 51 healthy subjects (without acne as controls). Serum IGF-1 level was assessed and compared across the two groups.

Overall, according to the obtained results in this study, it may be concluded that rate of metabolism is increased in patients with acne. This finding suggests that nutrition-related lifestyle factors play a role in acne pathogenesis. Hence, modifications in these styles are recommended to control acne formation. Also, use of IGF-1-reducing drugs, such as metformin, may be useful for treatment of acne. However, this matter may be confirmed by future studies.

Acne vulgaris is a chronic disease with numerous cosmetic, psychological, and spiritual problems leading to decreased quality of life among affected individuals (1-3).

In spite of many therapeutic options, the disease is considered as a challenging burden. Worldwide distribution of acne is different due to geographic and ethnic factors and frequency of known risk factors for acne in each region (3).

The most important etiology of acne is related to sex hormone increase in circulation and subsequently target organs (2). One of the other pathophysiological signs of acne is excess metabolic rate and basal metabolism (4, 5). Some of the most important etiologic foods in these categories are those with higher carbohydrate and fatty contents. Therefore, it has been proposed that consumption of foods with lower carbohydrate and fatty contents would reduce acne (6, 7).

In previous reports, evaluating the association between metabolism status and acne was performed without a definite conclusion and there are some controversies in this regard (8-13). One of the metabolic indicators is insulin-like growth factor 1 (IGF1). This mediator is especially integrated in the carbohydrate pathway. If the serum level of this mediator is increased, it would be an indicator of high metabolic rate. Regarding the bi-dimensional role of IGF-1 as a risk factor for some cancers, such as prostate cancer, and acne, the control of this substance may be more important to reduce the risk of cancers and it may be an indicator of tumors in patients with persistent acne with high serum IGF-1 levels (14). Use of insulin-sensitizing agents, such as metformin, may be useful in reduction of cancer risk (14-16). Hence, this study was performed to determine the serum level of IGF-1 in patients with acne vulgaris in comparison with healthy subjects.

The current study was a case-control assessment performed on a sample of 102 subjects, including 51 known cases of acne and 51 healthy subjects (without acne as controls), during years 2013 and 2014. The obtained data included age, gender, acne severity, acne location, and serum IGF1 level. Informed consent was obtained from the ethics committee of Iran University.

Patients with established acne according to existing medical documents and physical examinations in dermatology clinic of an academic hospital were included as the case group. Also, 51 healthy subjects among a larger population attending a training hospital in Tehran, Iran, participated in this study. Also, subjects, who were using insulin and/or oral glucose-lowering agents were excluded. The serum IGF-1 level was measured in both groups by sampling 2 mL of patients' serum. The used technique was the enzyme linked immunosorbent assay (ELISA) and all laboratory assessments were performed in a single lab center of the hospital. 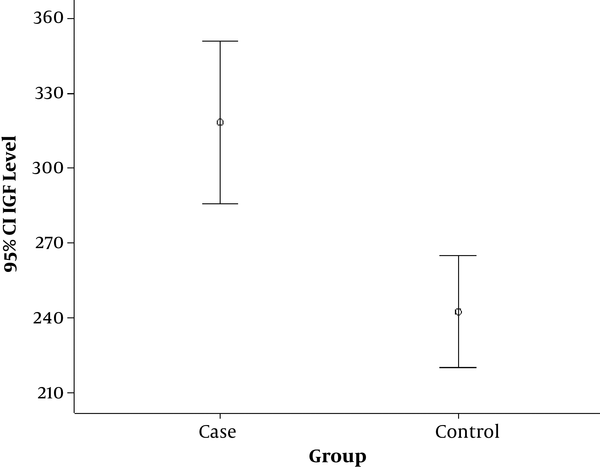 In the current survey, two groups of acne and healthy control groups were compared for serum IGF-1 level. The findings showed that serum IGF1 levels were significantly different between the two groups and serum level of IGF-1 was higher in the case group. However there was no association between acne severity and location and serum IGF1 level; male gender and younger age were significantly associated with higher serum IGF-1 level.

The obtained results were similar to those reported by Vora et al. (9) in the United Kingdom, demonstrating a significant relationship between acne and sebum secretion with serum IGF-1 level. Also, Smith et al. (10) in Australia showed a similar association between acne and serum IGF1 level. However, Kaymak et al. (11) reported no significant difference between serum IGF1 levels in the two groups of patients with and without acne. Their results were not in congruence with the current findings. This difference may be due to cultural and dietary differences and calories intake between countries.

In some previous molecular studies, it was proposed that IGF1 would act in two ways for increasing acne formation; firstly, by increasing lipid peroxidation in sebaceous cells (resulting in more sebum secretion) and secondly increasing the sex hormone level. According to these pathophysiological theories, the current results are logical (6). Some authors recommend diets that reduce the production of sex hormones and also IGF1. On the other hand, some studies have shown that DHEA restores low circulating androgens in females into the normal range and increases IGF-1 levels. This theory suggests a negative feedback leading to an increased acne formation (12, 13).

Since there was a statistically significant association between acne and serum IGF1 level, it may be concluded that patients with acne have higher metabolism rate in comparison with the control group. This finding suggests that nutrition-related lifestyle factors play a role in acne pathogenesis. Hence, performing some modifications in these styles are recommended to control acne formation. Also, use of IGF-1-reducing drugs, such as metformin, may be useful in treatment of acne. However, this matter may be confirmed by future studies. In case of high IGF-1, focus on factors that inhibit IGF-1 may be suggested, such as fasting, Carbs (especial carbohydrates), protein restriction, calorie restriction, intense walking, legumes, royal jelly, glucosamine, bilberry, luteolin, curcumin, resveratrol, lycopene, green tea, boron, genistein (17-20). Restriction in use of materials, such as blueberry, vitamin C, calcium, red meat, fat, magnesium, zinc, carnitine, selenium, cinnamon, is also suggested (21).

Copyright © 2018, Journal of Skin and Stem Cell. This is an open-access article distributed under the terms of the Creative Commons Attribution-NonCommercial 4.0 International License (http://creativecommons.org/licenses/by-nc/4.0/) which permits copy and redistribute the material just in noncommercial usages, provided the original work is properly cited.
download pdf 94.89 KB Abstract XML Get Permission (article level) Import into EndNote Import into BibTex
Number of Comments: 0