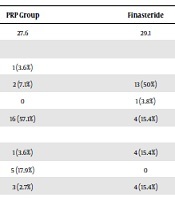 Androgenetic Alopecia is a chronic form of hair loss affecting both male and female; 20% of Caucasian men and 40% of women, respectively. Plasma Rich Platelet (PRP) is a blood plasma with higher platelet concentration. It seems that in androgenetic alopecia, growth factors have an important role in transformation and development of terminal hair to vellus hair. The growth factors in PRP can affect this process.

This was a case control study that was performed on 120 patients with grade II and III androgenetic alopecia, based on the Hamilton-Norwood classification system and grade 1 to 5 female pattern alopecia. Participants were randomly divided into two groups of 30 patients. The first group was treated with Finastride and the second underwent PRP treatment; with a group of 60 participants who received placebo. Follow-up was performed using macroscopic photography and Pull test base line, monthly for three months, and finally three months after PRP-treatment for patients who received PRP.

A total number of 120 participants enrolled in this study; 28 patients in the PRP group, 26 patients in the Finastride group and 60 patients in the control group. The results of one month follow up showed that hair growth and hair loss reduction were not significantly improved in the PRP group compared to the Finastride and control groups (P ≥ 0.05). Significant differences were observed in results of progression of hair growth and reduction of hair loss between groups after three and six months (P value: 00.)

PRP-treatment is a novel therapeutic approach. The effective results of PRP-treatment might be due to this eagerness. Furthermore, the time duration of this procedure is short, which is an important factor for the patients since most of the participants are young men who do not tend to undergo long-time treatments, such as Finastride consumption and Minoxidil application.

Androgenetic Alopecia (AGA) is a chronic hair loss affecting both male and female, 20% of Caucasian men and 40% of women, respectively (1, 2). There are only two FDA approved products available for AGA treatment, Minoxidil and Finastride. Unfortunately, these products are not compliant and satisfactory for the patients.

Plasma-Rich Platelet (PRP), as a new treatment approach, has been recently attracting more attention. PRP is blood plasma with higher concentration of the platelet (1). The therapeutic application of PRP, which has been shown to be mediated by growth factors, was first proposed in the wound healing process (3). Thereafter, PRP was suggested to be used as a pre-treatment technique in hair transplantation procedure (1). Recent studies have proposed PRP as a worthy treatment in androgenetic alopecia (1, 4-6).

This study was approved by the Ethics Committee of Iran University. This was a case control study, which was conducted during January 2015 to June 2017 on 120 male patients with a male pattern grade of II and III androgenetic alopecia, based on the Hamilton-Norwood classification system and female pattern (the Sinclair scale for female pattern hair loss, stage 1-5) (2).

Participants were randomly divided into two groups of 30 patients; the first group was treated with Finastride and the second group underwent PRP treatment. Furthermore, 60 participants received placebo as a control group. All the patients were informed formally and signed a consent form prior to enrollment in the study (IRCT2014062918210N2R1/18210).

Placebo consisting of normal saline was applied every night. The exclusion criteria included any application of topical materials on the scalp for treatment of hair loss or other diseases at least six months before the initiation of this study, any medical conditions, including malignancy, hematologic disease, and rheumatologic disease. The age range of the participants was 20 to 40 years, all of them being male. Patients who smoked were asked to stop smoking one week prior to their PRP procedure.

PRP was performed in three sessions every month. First, 20 cc blood was drawn from each patient using a standard kit. Blood samples were centrifuged at 3400 rpm twice for three minutes. Approximately, 3 - 5 cc PRP was extracted from each sample.

Activation process was induced using Calcium Gluconate in a 1.9 ratio. Finally, PRP was injected in six distinctive areas of the affected scalp after frontal block anesthesia, by a 30-gauge needle, which was used for Mesotherapy. The success rate of the procedure was graded according to the patient’s satisfaction, Pull test examination, and blinded physician assessment by photography to 3 scores (no improvement, minimal, significant improvement). Follow-up was performed using the macroscopic photography of Vetex and occipital region and Pull test along this study at the base line, monthly for 3 months, and finally 3 months after PRP-treatment for patients who received PRP.

Images of the treated area were acquired at each session using the same camera and two independent physicians evaluated the images (Figure 1). Statistical analyses were performed using SPSS version 21. Chi-square, t-test, and Mann-Whitney U test were used for statistical analyses. P value of less than 0.05 was considered significant.

The results of one month follow up showed that hair growth and hair loss reduction were not significantly improved in the PRP group compared to the Finastride and control groups (P ≥ 0.05) (Table 2).

Interestingly, the progression of hair growth and hair loss reduction had no correlation with age, grade, and type of alopecia; results were similar in patients with androgenetic alopecia and female pattern hair loss (P value > 0.05).

Significant differences were observed in results of progression of hair growth and reduction of hair loss between groups after three and six months (P value: 0.0) (Tables 3 and 4, and Figure 1).

Findings of this study are comparable to other studies. These results were consistent to those presented by Lee et al. (7), and Gkini et al. (1). They showed that PRP can reduce hair loss and increase hair volume.

In another study, Khatu et al., performed PRP-treatment four times every two weeks and have shown patients’ satisfaction between the first and fourth sessions. This result was unlike our finding where no improvement was observed in our study one month after the last treatment session; only three months after the last treatment session significant hair loss reduction and hair growth were observed (4).

Most of the patients who participated in this study experienced hair loss along the procedure, which can be considered as a telogen effluvium effect of injection procedure. These findings are not consistent with Utter’s study that mentioned no side effect in patients undergoing PRP procedure (8).

The present study is less valid compared to the double-blind study conducted by Gentile et al., that investigated the efficacy of PRP on hair loss. This is due to the fact that the participants in the current study were concerned about the modality of their treatment, which could encourage them to continue PRP procedure more than consuming Finastride due to their concept of PRP as a more efficient treatment (9).

This study investigated both androgenetic alopecia and female pattern hair loss in male patients, which is a prominent point of the present study because a few studies have examined the effect of PRP on female pattern alopecia in males. Furthermore, findings of this study are consistent with those presented by Lee et al., who found that PRP treatment has a positive effect on this type of Alopecia (7).

This study showed that PRP has a beneficial effect not only on hair loss reduction but also on hair re-growth process. Therefore, PRP-treatment is a new therapeutic approach that has received highly favorable reviews by patients. The treatment sessions were not discontinued by the patients. The positive results of PRP-treatment may be due to the patients’ eagerness. Moreover, the duration of this procedure is short, which is an important factor for the patients since most of the participants were young men who do not tend to undergo long-time treatments, such as Finastride consumption and Minoxidil application. Further in-depth studies are required in this field, for instance Trichoscopy to reach precise PRP findings.

Copyright © 2019, Journal of Skin and Stem Cell. This is an open-access article distributed under the terms of the Creative Commons Attribution-NonCommercial 4.0 International License (http://creativecommons.org/licenses/by-nc/4.0/) which permits copy and redistribute the material just in noncommercial usages, provided the original work is properly cited.
download pdf 3.38 MB Get Permission (article level) Import into EndNote Import into BibTex
Number of Comments: 0