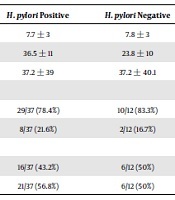 Helicobacter pylori (H. pylori) infection is associated with gastric and extra-gastric manifestations such as idiopathic urticaria.

The aim of this report was to investigate the relationship between H. pylori positivity and chronic urticaria.

This case control study was carried out between June 2018 and March 2019. The study was conducted at the Dermatology Consultation Unit, Azadi Teaching Hospital, Duhok, Iraq. A total of 49 patients with chronic urticaria were recruited in the study. During the study period, 95 subjects were recruited as a control.

The prevalence of H. pylori infections was high in the region. No association was found between H. pylori positivity and chronic urticaria. Further study is needed to explore the effect of H. pylori eradication on urticaria treatment outcome.

Helicobacter pylori (H. pylori) is a Gram-negative bacillus that causes gastritis and ulceration (1). H. pylori predisposes to gastric cancer, which is the second most common cause of death due to cancers (1). The pathogenesis of this microorganism thought to have multifactorial etiology (2). Bacterial virulence factors, host genotypes, immune response, and environmental factors are thought to play a role in the pathogenesis of this microorganism (2). Several reports have linked H. pylori to a variety of extra-gastric diseases (3). These include ischemic heart disease, skin diseases such as idiopathic urticaria, autoimmune thyroiditis, thrombocytopenic purpura, iron deficiency anemia in pediatrics, Raynaud’s phenomenon, scleroderma, migraine, and Guillain-Barre’ syndrome (3). The exact mechanism behind this is not fully understood. However, activation of the cascade of coagulation, stimulation of atherosclerosis formation, and antigenic mimicry between the microorganism and host epitopes have been proposed as hypothetical mechanisms explaining the relationship between H. pylori and extra-gastric disorders (3).

Chronic urticaria is a dermatological disorder that is characterized by widespread, temporary wheals that occur on a daily basis for at least six weeks (4). Several causes have been proposed to explain chronic urticarial; this includes infections including bacteria, viral, fungal, or protozoan infection. Additionally, auto-immune antibodies are detected in about 50% of the cases suggesting inflammatory mechanisms as an etiology of this disorder (4). Several studies showed a possible relationship between H. pylori infection and chronic urticarial; however, such a relationship remains controversial. H. pylori infection was studied thoroughly in our locality (5-7).

This case control study was carried out between June 2018 and March 2019. The study was conducted at the Dermatology Consultation Unit, Azadi Teaching Hospital, Duhok, Iraq. During the survey, enrolled subjects were interviewed using a standardized questionnaire information that included age, gender, and address. The questionnaire composed of questions regarding demographical data about patients including age, gender, place of residency, and family members number (Appendix 1 in Supplementary File).

During the study period, all subjects who were presented to the dermatology unit with chronic urticaria were enrolled in the study. The inclusion criteria included patients with chronic urticaria, as defined as temporary wheals that occur on a daily base for at least six weeks, and agreed to be involved in the study by signing informed consent. Patients with acute urticaria, inducible (physical) urticaria, who received antibiotics in the prior two weeks, and who did not agree to sign the consent were excluded.

A 5cc syringe and needle were used to obtain 5 mL of blood from each subject. Then, the blood samples were centrifuged at 1500 rpm for 3 min to obtain the serum. The HCV AB (fourth generation) with 100% sensitivity and specificity and the hepatitis B-specific HBsAg with a 100% sensitivity and 97.5% specificity were studied by commercial DIA.PRO diagnostic Bioprobes ELISA kit (Italy), following the manufacturer’s instruction. Anti-H. pylori IgG ELISA (EUROIMMUN Germany) was utilized for the detection of the presence of H. pylori-specific IgG, according to the manufacturer’s instructions. The recommended cut-off values were used.

Linear regression was used to explore such a relationship between variables and outcomes when the variables were continuous while chi-square test was used for categorical data. P value of < 0.05 value was considered as significant.

This project and the consent were approved by the Ethics Committee of the College of Medicine, University of Duhok. Informed consent was obtained from all recruited subjects.

During the study period, 49 patients with chronic urticaria were recruited in the study. Among the recruited samples, 10/49 (20.4%) were male. The average age of participants was 36.5 ± 11 years. All patients were examined for HBsAg and HCV-AB. All patients were negative for these two viral infections. Complete blood count was normal in 47/49 (95.9%) of the recruited samples. Thyroid function was normal in all patients. Additionally, during the study period, 95 subjects were recruited as a control. Among them, 30/95 (31.6%) were male and the average age of the control group was 32.6 ± 11.4 years.

Table 1. The Association Between H. pylori Positivity and Different Variables

Table 2. The Association Between H. pylori Positivity and Different Variables in Patients with Urticaria

The association between H. pylori infection in chronic urticaria has been studied with controversial results. Several studies showed that H. pylori eradication led to a better treatment outcome with a better remission of urticaria symptoms (16, 17), suggesting a possible role for H. pylori in the pathogenesis of urticaria. On the other hand, the prevalence of H. pylori positivity in subjects with chronic urticaria was not significantly higher than that in the control group (17). However, the severity of urticarial was higher in patients with the H. pylori infection. Additionally, after the eradication of H. pylori therapy, more than eighty percent of the H. pylori-positive urticaria group experienced complete remission after receiving eradication therapy for H. pylori (17). One project from Germany showed a better outcome and remission of symptoms after H. pylori eradication (18). On the other hand, another study showed that the symptoms of urticaria was triggered by H. pylori eradication (19). Large, randomized, double-blinded, controlled studies are required to study the therapeutic effect of H. pylori eradication in subjects with chronic urticaria. In our study, no significant difference in H. pylori positivity was found between the patients’ group and control group. In a study conducted in Basrah, Southern Iraq, the prevalence of H. pylori was significantly higher in patients with urticaria than the control group (20). The discrepancy between the two studies could not be explained precisely. However, the discrepancy might be due to a small sample size used in our study, patient’s genetic makeup, and the virulence of the microorganism.

Copyright © 2019, Journal of Skin and Stem Cell. This is an open-access article distributed under the terms of the Creative Commons Attribution-NonCommercial 4.0 International License (http://creativecommons.org/licenses/by-nc/4.0/) which permits copy and redistribute the material just in noncommercial usages, provided the original work is properly cited.
download pdf 121.29 KB Get Permission (article level) Import into EndNote Import into BibTex
Number of Comments: 0