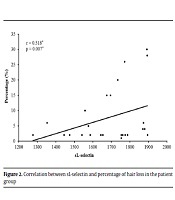 Alopecia Areata (AA) is an immune system disease that invades anagen Hair Follicles (HFs) and shows multifactorial etiology. One of the essential histopathological features of AA is a lymphocytic intrusion that envelops HFs. Soluble forms of Endothelial (E), Lymphocytic (L), and Platelets (P)-selectins are known markers of persistent bothering. There are limited examinations for the assessment of serum levels of soluble E-selectin, L-selectin, and P-selectin in patients with AA.

We assessed serum levels of soluble E-selectin and L-selectin in patients with in association with the control group to determine their role in the pathogenesis of the disease.

The study included 30 patients with AA and 10 healthy subjects who served as controls. Blood samples were taken from all patients and controls. The serum levels of soluble E-selectin and L-selectin were determined with the Enzyme-linked Immunosorbent Assay (ELISA) method.

This study showed that sE-selectin and sL-selectin may play a significant role in the pathogenesis of AA and might open a way to future treatments for this disease.

Alopecia Areata (AA) is a reversible, immunologically intervened disease, causing the demolition of Hair Follicles (HFs) and immediate hair loss. The disease has typical long term endless course. It essentially diminishes the patient’s personal satisfaction. The etiology and pathogenesis of the disease have not been completely explained. It has been proposed that damage to HFs happens regarding the encompassing lymphocytic penetration, which is seen in histopathologic assessment (1, 2). Another pathogenetic factor relates to blocked angiogenesis with the critical role of selectins (1, 3). Endothelial (E)-selectin is considered one of the genuine markers of endothelial cell damage, while soluble forms of E-selectin, lymphocytic (L)-selectin, and platelets (P)-selectin are considered as pointers of advancing inflammation (2). Concentration of selectins is generally assessed in psoriasis, systemic lupus erythematosus, urticaria, dermatitis, lichen planus, bullous pemphigoid, pemphigus vulgaris, scleroderma and other autoimmune diseases (4, 5). There are limited assays for the evaluation of serum concentration of soluble E-selectin, L-selectin, and P-selectin in patients with AA (6, 7).

Selectins are carbohydrate- binding particles that dilemma to fucosylated and sialylated glycoprotein ligands, and are detected on endothelial cells, leucocytes, and platelets. They has a role in attraction of cells of the innate immune system, T-lymphocytes and platelets. A nonappearance of selectins or selectin ligands has serious outcomes in mice or humans, leading to recurrent bacterial infections and persistent disease. Selectins are associated with constitutive lymphocyte homing and in the acute and chronic inflammation processes, including post-ischemic inflammation in muscles, kidneys and heart, skin inflammation, atherosclerosis, glomerulonephritis, and lupus erythematosus (8).

After endorsement of the research ethics committee (approval code 30807/03/16), this study was conducted as a case-control study on 30 patients with AA at different sites with no history of previous treatment. They were enrolled from April 2016 to January 2017 in an outpatient clinic. Patients with old AA lesions, on topical or systemic treatment, treated with antihistamines or vascular drugs in the last six months, pregnant and lactating women, and patients with autoimmune disease were excluded from the study.

In addition, 30 healthy volunteers were included as controls. Written informed consent was taken from all participants in this study. All studied subjects underwent history taking, general and dermatological examination, routine laboratory investigations, clinical assessment of AA severity by SALT score, and estimation of the serum level of sE-selectin and sL-selectin by ELISA.

The clinical assessment of AA severity by the SALT Score (9) in the scalp was done by partitioning the scalp into four quadrants and by outwardly deciding the level of scalp male pattern baldness in each quadrant and including the numbers together with a maximum score of 100%. The sores were divided as follows:

We collected 5 mL of venous blood from all participants under complete aseptic conditions in plain tubes. They were centrifuged and the obtained sera were isolated and stored in aliquots at -70°C until use for the estimation of serum sE-selectin and sL-selectin levels using human sE-selectin ELISA kit (Sun Red, catalog No. 201-12-0263) and human sL-selectin ELISA kit (Sun Red, catalog No. 201-12-7316).

Data were imported to a PC and analyzed using IBM SPSS programming group variation V. 20.0. (Armonk, NY: IBM Corp) (10). Subjective data were presented as numbers and percentages. The Kolmogorov-Smirnov test was used to check the distribution of data. Quantitative data were presented as ranges (minimum and maximum), mean, standard deviation, and median. Significance of the obtained results was judged at the 5% level.

bP value for Monte Carlo for chi-square test to compare the two groups.

ct and P values for Paired t-test to compare the two groups.

Table 2. Distribution of Studied Patients According to Size of Lesion, Changes with Time, Body Hair Loss, and SALT Scorea There was no significant relationship between the serum level of sL-selectin and sex, age, special habits, presence of stress, past history, family history, or nail involvement in the patient group. No significant relationship was detected between the serum level of sL-selectin and the number of patches, the site of hair loss, the size of patches, changes in the size of the lesions with time, and the SALT score in the patient group. Alopecia areata is a typical, clinically heterogenous, insusceptible intervened, non-scarring hair loss (11, 12). It is a chronic disease mediated by T lymphocytes with a multifactorial pathogenesis. The histological assessment of AA injury uncovers cell penetration around HFs with a large number of T-cells and other provocative cells (13). Cormia and Ernyey in 1961 (14) reported bald skin the presence of inflammatory infiltrate around blood vessels with a thickening of their walls. Endothelial-selectin plays a significant role in managing T-lymphocytes to the inflammation sites (15-17). It is additionally a ligand of antigens found on the outside of fiery cells, including Cutaneous Lymphocyte-related Antigen (CLA). Patients with severe AA demonstrate significantly higher CLA-positivity in peripheral blood lymphocytes, CD4+, and CD8+ lymphocytes than normal controls. Also, the penetration of CLA-positive lymphocytes around HFs of patients with AA was shown by immunohistochemistry. These outcomes propose that most lymphocytes penetrating around HFs of AA patients are CLA-positive T-lymphocytes (16).

Lymphocytic-selectin is found on the outside of lymphocytes, granulocytes, and monocytes (18). Its appearance decreases after cell activation. The inflammatory mediators peel of L-selectin from leucocyte cell surface which leads to the increase its soluble forms (19). Soluble forms of this molecule are probably capable of inhibiting the adhesion processes (19).

The present study showed significantly higher serum levels of sE-selectin and sL-selectin in AA patients than in controls. The results of the study were supported by a recent study in which Sudnik et al. (6) reported significantly higher E-selectin serum levels in patients with AA than in healthy controls. They explained that the raised levels were due to the scaling of E-selectin from the outside of endothelial cells. This may indicate a progressing fiery procedure in the vessels (6).

The present study demonstrated a statistically significant increase in the concentration of serum sE-selectin with multiple patches of AA. There was a positive correlation between the serum level of sE-selectin and the percentage of the area of hair loss. This result was in agreement with Sudnik et al. (6) who identified an elevated normal concentration of sE-selectin in patients with progressively severe AA, which might be related to the severity of lymphocytic penetration in different types of AA.

Leeuwenberg et al. (20) demonstrated sE-selectin secreted by activated endothelial cells identified with sandwich ELISA. According to the increase of E-selectin expression in the scalp, it may lead to the increased release of sE-selectin from activated endothelial cells because E-selectin gene transcription is strongly downregulated within 6 to 9 hours after induction (21). E-selectin mRNA has a short half-life and E-selectin is quickly disguised and degraded in lysosomes (21). Previous studies showed that a little part of the total E-selectin expressed on endothelial cell surface is released (20, 22). The mechanisms controlling its release have not been clarified. Soluble E-selectin has been in use for well over 10 years as a marker of endothelial cell activation or irritation that may associates with the seriousness of illness or outcome (23, 24). Another study showed a high expression of E-selectin in a patient with 14 years’ history of AA in contrast with psoriatic skin (25).

The current study also demonstrated a positive correlation between the serum level of sL-selectin and the percentage of the area of hair loss and the size of lesion. The expression of L-selectin identified on the surface of lymphocytes, granulocytes, and monocytes is diminished after cell activation (18). The inflammatory mediators peel of L-selectin from leucocyte cell surface that leads to increase its soluble form (19, 26). Soluble forms of L-selectin are most likely fit for repressing the adhesion processes (27).

In agreement with Sudnik et al. (6), there was no huge difference in the convergence of sL-selectin depending on the movement of the illness. However, the participation of adhesion molecules in inflammation is a self-limiting process. It is known that interaction of selectins, both soluble and associated with the cell membrane forms, can affect the activity of the inflammatory process. It is acknowledged that the serum type of L-selectin is apparently a fragment of the cradle framework, which confines the path toward moving leucocytes and henceforth their migration to destinations of irritation (28). Elevated levels of sL-selectins in patients with AA, as reported in the present study, can likewise restrain the relocation of leucocytes to destinations of aggravation. It appears that the evaluation of articulation of these selectins in the skin of AA patients would be gainful.

Copyright © 2019, Journal of Skin and Stem Cell. This is an open-access article distributed under the terms of the Creative Commons Attribution-NonCommercial 4.0 International License (http://creativecommons.org/licenses/by-nc/4.0/) which permits copy and redistribute the material just in noncommercial usages, provided the original work is properly cited.
download pdf 154.02 KB Get Permission (article level) Import into EndNote Import into BibTex
Number of Comments: 0