Expression of Fas Receptor and Fas Ligand in Eczematous Dermatitis 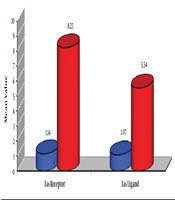 The principal role of epidermal keratinocytes (KCs) in inducing and maintaining eczematous dermatitis has been rather neglected.

The study aimed to assess the expression of Fas receptor (FasR) and Fas ligand (FasL) in the skin of eczematous dermatitis patients to examine T-cell mediated KC apoptosis.

The study concluded that the upregulation of FasR and FasL may be involved in the pathogenesis of eczema through induction of KC apoptosis. This might help in the future use of anti-apoptotic therapy for prevention and treatment of eczematous dermatitis.

The pathogenesis of spongiosis is not fully understood, and many hypotheses have been suggested in this regard. The process of spongiosis entails two events: detachment of keratinocytes (KCs) from each other and fluid influx between the detached cells because of the osmotic pressure gradient. However, no one can explain which of these two events begins first (6).

Fas receptor [apoptosis antigen 1 (Apo-1) (APT 1)/cluster of differentiation 95 (CD95)/tumor necrosis factor superfamily 6 (TNFRSF6)] is a transmembrane receptor (7) that belongs to the death receptor family. It is a subgroup of the tumor necrosis factor (TNF)/nerve growth factor (NGF) receptor superfamily (8) and acts as the target of cell death-inducing antibodies (9). In addition to its apoptotic function, Fas receptor (FasR) has other cellular responses including migration, invasion, inflammation, and proliferation (10).

We aimed in this study to assess the expression of FasR and Fas ligand (FasL) in the lesional skin of eczematous dermatitis [including eczema, atopic dermatitis (AD), and contact dermatitis (CD)] to allow the study of T-cell mediated KC apoptosis.

The study was conducted in a dermatology outpatient clinic after approval of the Dermatology Research Ethical Committee (Protocol number: 20/2014). The population included 35 patients with eczematous dermatitis, as well as 15 sex- and age-matched healthy controls, during the time interval from December 2014 to April 2015. Written informed consents were obtained from all the participants.

Written informed consents along with detailed information on medical history were collected from all the patients. Further, they underwent full clinical examination and skin biopsy. Clinical assessment was performed to determine the extent of eczema and the disease severity using the eczema area and severity index (EASI) (11).

Fifteen age- and sex-matched healthy volunteers were included as a control group. All the recruits were with no history of acute or chronic dermatological or systemic diseases including renal and liver diseases or malnutrition. All the control group participants submitted written informed consents and underwent skin biopsy.

Four millimeter punch biopsies were taken from the lesional skin of the studied patients and the normal controls. Local anesthesia was injected around the biopsy site. The skin biopsies were stored in an empty test tube at -70°C for quantitative real time-polymerase chain reaction (qRT-PCR).

Ribonucleic acid (RNA) extraction from skin tissue biopsies: sample preparation and cell lysis: A volume of 20 to 50 mg of fresh skin biopsy was collected in a micro-centrifugation tube. Thereafter, 300 µL lysis buffer was added and then homogenization was performed using a pellet pestle; an apparatus operated by hand. Afterwards, a further 200 µL lysis buffer was added using a vortex for 15 - 30 seconds. Centrifugation was performed at 10,000 g for 10 minutes.

If debris remained in the supernatant, 500 µL chloroform was added followed by using a vortex for 15 - 30 seconds. Next, 10,000 g centrifugation was applied for 10 minutes. The supernatant was then transferred into microcentrifuge tubes.

RNA elution: A spin column was placed into a micro-centrifuge tube free of ribonuclease. Then, 40 - 50 µL elution buffer was added to the middle of the column membrane. This was followed by incubation at room temperature for 1 minute. Afterwards, 10,000 g centrifugation was performed in 1 minute for RNA elution. RNA was stored at -20° to -80°C.

Reverse transcription into cDNA: Template RNA and distilled water were added into Maxime RT PreMix tubes (Oligo dT or random primer) to a total volume of 20 μl. The clear pellet was dissolved by pipetting. A cDNA synthesis reaction was performed as follows using a PCR machine. The above reactant was diluted by adding 20-50 μl sterile water into a tube containing cDNA obtained at RT.

DNA amplification: A vortex was used for the samples and briefly centrifuged to collect all drops to the bottom of the tube. The samples were placed in a thermocycler and a PCR program was initiated. Sequences of the primers used for real-time PCR were as follows:

This study was conducted on 35 patients with eczematous dermatitis and 15 normal subjects serving as controls.

Table 1. The Correlation Between Fas Receptor and Fas Ligand with the Different Studied Variables in the Cases Groupa, b

Comparison of the patients and the controls yielded no statistically significant differences in terms of age and sex (P > 0.05).

4.3. Comparison of Fas Receptor and Fas Ligand in Studied Groups

Figure 1. The comparison between the two studied groups in terms of the mean values of Fas receptor and Fas ligand

4.4. FasR and FasL in Relation to Other Variables

The stage of the disease was shown to be statistically uncorrelated with FasR and FasL (Table 2).

Table 2. The comparison Between the Mean Values of Fas Receptor and Fas Ligand in the Cases Group Classified According to Stage Subgroupsa, b

Table 3. The Comparison Between the Mean Values of Fas Receptor and Fas Ligand in the Cases Group Classified According to Eczematous Dermatitis Typesa, b

Comparison of FasR and FasL revealed no statistically significant differences between the patients with AD and those with CD and eczema (P > 0.05) (Table 3).

The pathogenesis of the hallmark sign of acute eczema, i.e. spongiosis, is not yet completely recognized. Numerous studies have been carried out to clear up the influx mechanism of tissue fluid into the epidermis and the lost cohesion between KCs in acute eczema that leads to spongiosis (6).

Spongiosis is induced by early apoptosis of KCs, secondary to cell shrinkage and cleavage of E-cadherin, which is essential in conveying KC cohesion. It has been shown that the loss of KC cohesion constitutes the main event in spongiosis formation. Therefore, in spite of being the main driving force of spongiosis formation, fluid influx into the skin is apparently not the primary step, but rather the end result of successive pathogenic events (6).

The use of the Fas protein (CD95) might be the most important way to induce apoptosis by triggering death receptors, which are a family of transmembrane proteins (1, 10, 12). Fas activation can induce phosphorylation of nuclear factor of kappa light polypeptide gene enhancer in B-cells inhibitor, alpha (Iκ-Bα), which activates the nuclear factor-kappa B (NF-κB) pathway, thereby inducing production of interleukin (IL)-8 and TNF-α (13).

FasR stimulation has been suggested as a triggering factor for production of chemokines and cytokines from macrophages, neutrophils, vascular smooth muscle cells, and dendritic cells (14, 15). Tumor necrosis factor related-apoptosis-inducing ligand (TRAIL) has also been reported to induce production of chemokines and promote macrophage migration in vitro, although no role has been demonstrated for specific chemokines in this context (16).

Fas stimulation can induce a pro-inflammatory cascade, leading to expression and secretion of multiple chemokines and cytokines. It runs in parallel with events, leading to apoptosis of cells. Cells dying in response to Fas stimulation produce several chemokines [monocyte chemoattractant protein 1/chemokine (C-C motif) ligand 2 (MCP-1/CCL-2), IL-8, regulated on activation, normal T cell expressed and secreted (RANTES)/CCL5 and CXCL1/KC], some of which promote chemotaxis of phagocytes toward the source of these factors (17). Cullen et al. stated, “apoptotic cells may also secrete soluble factors, dubbed “find-me” signals, that can promote chemotaxis of phagocytic cells toward dying cells” (18).

Activated T cells infiltrating the skin in AD and CD upregulate Fas expression by KCs through interferon-gamma (IFN-γ) and induce apoptosis through FasL, which is expressed on the T cell surface and released into the microenvironment (19). Damage to KCs might occur without cell-cell contact with T cells, although some T cells apparently migrate between epidermal KCs. However, the precise mechanism of T-cell migration into the epidermis and its link with the apoptosis of KCs are still unknown (20).

These findings support the view that pro-apoptotic pathways are activated in KCs of AD patients, contributing to at least some of the clinical and histological features of the disease (21). However, spongiosis is limited to the suprabasal epidermis. This is because expression of the cell-intrinsic, caspase-8 inhibitor, c-FLIP, which modulates Fas-FasL signaling, is tightly restricted to the basal layer protecting basal KCs from apoptosis (22).

In this work, we studied the expression of FasR and FasL that are known to induce KC apoptosis and inflammation, in an attempt to identify their intertwined relationship and role in the complex pathogenesis of eczematous dermatitis.

We observed that FasR and FasL were upregulated in the cases group compared to the controls (P < 0.001). However, we could not find in the literature what matches or contradicts these findings. These findings suggest the possible role of the upregulated FasR and FasL in the pathogenesis of eczematous dermatitis. This strongly advocates the importance of further research to explore this point and highlight its value in the future management of such diseases.

We also found that FasR and FasL were upregulated in the eczema cases compared to the cases with the other forms of eczematous dermatitis (CD and AD) (P = 0.001). However, we observed FasR and FasL downregulation in the CD cases in comparison with the eczema and AD cases (P = 0.001). No previous studies could be found to match or contradict these results. These findings may suggest that the quantitative amount of Fas expression may alter the clinical picture or modulate the type of eczematous dermatitis.

In this study, we did not detect any significant correlation between FasR and FasL with any of the recorded variables, including age and sex, or the disease parameters including stage of disease, site of disease, disease duration, redness, thickness, scratching, and EASI score. This can be explained by the fact that Fas is responsible for the initiation and/or maintenance of eczematous dermatitis without being affected by any variables. Unfortunately, no related studies in the literature could either support or contradict these findings.

Psoriasis induction is promoted by FasR/FasL signaling through activated NK cells. Downstream events, including induction of TNF-α production by KCs and psoriasis histological changes, are prevented by blockage of Fas signaling. Consequently, Fas signaling can be considered an essential early event in the induction of psoriasis via the non-apoptotic pathway (23).

Anti-Fas antibody (ZB4), a monoclonal antibody that blocks Fas-mediated apoptosis, and anti-FasL were both effective in significantly blocking histological changes of psoriasis, including increased epidermal thickness (24). These results can encourage research on the use of anti-Fas antibodies for management of eczematous dermatitis and evaluation of these results. Moreover, this study can open a new era in the management of such groups of dermatological disorders.

According to the results of this work, it can be suggested that the increased expression of FasR and FasL in eczematized lesions is probably involved in the pathogenesis of eczema through several mechanisms including an unchecked pro-inflammatory TNF-α consequence. This result urges to further investigate the issue. In addition, it offers a new therapeutic approach for prevention and treatment of eczematous dermatitis using anti-Fas therapy.

1) The number of the participating patients was small.

Copyright © 2019, Journal of Skin and Stem Cell. This is an open-access article distributed under the terms of the Creative Commons Attribution-NonCommercial 4.0 International License (http://creativecommons.org/licenses/by-nc/4.0/) which permits copy and redistribute the material just in noncommercial usages, provided the original work is properly cited.
COMMENTS