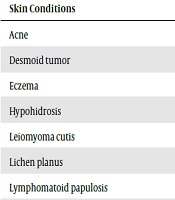 Becker’s nevus is a hamartomatous hyperpigmented patch, first reported in 1948 by an American dermatologist, Samuel William Becker (1894 - 1964) (1). Several dermatoses have been reported in association with Becker’s nevus. Box 1 shows a select list of these skin conditions (1-8).

Systemic abnormalities, such as ipsilateral limb shorting and breast hypoplasia, can also occur with this nevus (9). Lichen simplex is a localized area of chronic, lichenified eczema/dermatitis. There can be a single plaque or multiple plaques. It is also called neurodermatitis (10).

To our knowledge, the co-occurrence of LSC with Becker’s nevus has not been reported. We share our observation of a young man with LSC limited to Becker’s nevus.

A 23-year-old healthy Bengali male, working as a cleaner, presented with pruritic lichenified papules in a dark spot on his left forearm persisting for several weeks (Figure 1). He had no known medical problems and was not on any medication. He had noted the dark hyperpigmentation and the increased hairiness of this patch since late childhood. He was diagnosed with Becker’s nevus. Several months ago, he developed severe scratching that was limited to this patch, but he received no treatment for this itchiness. There were no other skin lesions. A 4-mm punch biopsy (performed after obtaining informed consent from the patient) from a pruritic papule demonstrated thick hyperkeratosis and epidermal acanthosis, which were consistent with the clinical diagnosis of LSC. The patient was managed with a psychodermatological approach. He was advised to trim his nails, avoid scratching, distract his attention to the lesion, and avoid stresses in general.

He was prescribed a two-week course of topical betamethasone 1% ointment to be applied twice daily, and chlorpheniramine maleate (Histop) as a 4-mg tablet to be taken orally three times daily. He is being followed up clinically, but he has not visited the clinic.

Various hypotheses and pathological mechanisms have been discussed to explain the occurrence of coexisting abnormalities in Becker’s nevus (2). For instance, an increase in androgen receptors in Becker’s nevus might contribute to the development of acneiform eruption and breast hypoplasia. Hypohidrosis that colocalizes with Becker’s nevus is considered to be related to genetic mutation or mosaicism (2).

As a chronic skin condition, LSC is linked to emotional factors that are the sources of intense pruritic sensation (10). That pruritic lesions in our case were recurrent and always localized to the hyperpigmented patch suggests that the coexistence of these two conditions is more than a mere coincidence. Nonetheless, we could not verify the exact cause of the association of LSC with Becker’s nevus in our case. However, as a possibility, anxiety generated by the shape of the nevus precipitated the LSC. The abnormal neural component of the hamartomatous lesion of Becker’s nevus might be another factor in the development of LSC.

Copyright © 2020, Journal of Skin and Stem Cell. This is an open-access article distributed under the terms of the Creative Commons Attribution-NonCommercial 4.0 International License (http://creativecommons.org/licenses/by-nc/4.0/) which permits copy and redistribute the material just in noncommercial usages, provided the original work is properly cited.
download pdf 2.69 MB Peer Review Comments ( 208.12 KB) Get Permission (article level) Import into EndNote Import into BibTex
Number of Comments: 0