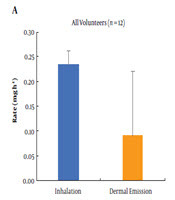 Human skin gas is known as traces of gas emanating from the human skin. Exogenous chemicals such as toluene may be released from the skin surface when absorbed into the body. However, dermal emission of toluene has not been fully determined in relation to inhalation exposure.

This study aimed to characterise the mechanism of toluene emanating from the skin surface of healthy volunteers in relation to inhalation exposure.

This demonstrates that dermal emission is a newly discovered route of excretion of toluene from the human body and that dermal toluene might indicate the individual biological susceptibility to inhalation exposure to toluene.

Human skin gas is known as traces of gas emanating from the human skin. It has been attracting considerable attention in relation to various roles such as a mosquito attractant (1), specific odour of elderly people (2), indicator of smoking (3) and drinking alcohol (4), non-invasive medical biomarkers for severe burns (5), acute poisoning (6), liver disease (7), and diabetes (8). Volatile compounds are formed by the internal metabolism and carried into the blood, and they can move to the skin surface with sweating and/or directly travel from the blood through the dermal layers as a vascular network lies beneath the skin (4). Exogenous volatile compounds absorbed into the body are also released via this route (3, 6). Therefore, the human skin is a possible excretion route of volatile compounds from the human body.

Toluene (IUPAC systematic name: methylbenzene) is commonly used as a solvent and is released from various products found in homes, including paints, adhesives, automotive products, and some personal care products (9). Exposure to toluene is known to cause adverse health effects such as headaches, dizziness, feelings of intoxication, eye, nose and throat irritation by laboratory and workplace studies (9). Hisanaga et al. (10) investigated the amount of chemicals emanating from the skin surface of 10 subjects and found an increased dermal emission of toluene from one male subject due to toluene exposure at his workplace. Sekine et al. (3) detected the dermal emission of toluene from both smokers and non-smokers due to unintentional passive smoking in indoor environments. However, dermal emission of toluene has not been quantitatively determined in relation to exposure in indoor environments.

This study aimed to characterize the mechanism of toluene emanating from the skin surface of healthy volunteers and to identify the influence of being exposed to toluene in an indoor environment on the dermal emission employing a passive flux sampler (PFS) coupled and gas chromatography-mass spectrometry (GC-MS) (2, 3, 6). The PFS is a simple device developed by the authors to determine the dermal emission flux (emission rate per area) of volatile organic compounds (VOCs) (2, 3, 6). The sampler can be used anywhere non-invasively and be operated by non-medical professionals. In this study, volunteer tests were conducted to link the dermal emission and toluene inhalation in an indoor environment.

Figure 1 shows a schematic representation of the PFS when it is applied to the skin surface. The device is composed of a glass vial with a polypropylene screw cap, disk type trapping medium (MonoTrap® DCC18, GL Sciences, Japan), and O-ring as a stopper. The PFS is first put on the skin surface to create a headspace with a height of 0.80 cm. VOCs emitted from the skin diffuse towards the trapping medium within the headspace and are collected on the medium. The DCC18 disk is made of silica embedded with activated carbon powders (11). Prior to its use, the open end of the sampler was capped with the glass vial and sealed with a piece of ParafilmTM. The sampler was then enclosed in an aluminium bag. where W is the amount (ng) of toluene collected, S is the effective cross-section of the trapping medium (0.594 cm2), and t is the sampling time (1.0 h). Procedure blanks were subtracted from the sample.

Test 1: To investigate the effect of inhalation exposure of toluene in an indoor environment on the dermal emission, 10 healthy volunteers, 8 men (age: 21 - 24 years) and 2 women (age: 23 - 24 years), were recruited and divided into two groups A and B (n = 5 for each group). Before sampling, volunteers washed their left forearm using soap and tap water. After applying PFS to the skin surface of the left forearm, the forearm was covered with a sleeve to prevent surface contamination by toluene deposition in the air. During the first session, group A wore a single particulate respirator type N95 embedded with charcoal for trapping VOCs (SH9550C, NIOSH approved, San-Huei United), entered into a chemical laboratory where the toluene concentration was approximately 1.5 mg.m-3 (cf. threshold limit value for toluene is 20 ppm (12), 76.5 mg.m-3 at 293 K), and stayed at rest in the laboratory. Group B also stayed in the same room without wearing the N95 mask. At the second session, Group B wore the N95 mask and stayed at rest in the laboratory for 1 h and group A stayed without the mask in the same laboratory. All volunteers conducted human skin gas samplings for 1.0 h at each session. The room temperature was 293 K, and relative humidity was around 50%.

Test 2: To investigate variations in the dermal emission flux of toluene after exposure, four healthy volunteers, 3 men (age: 21 - 24 years) and 1 woman (age: 23 years), were recruited. The PFS was applied to the left forearm of participants. The participants stayed at rest in a general school class room for 1 h, before being moved into the chemical laboratory without a N95 mask and stayed at rest for 1 h, and then returned to the class room for 2 h. Human skin gas sampling was conducted before, during, and after exposure to toluene at every 1 h.

Test 3: To investigate the relationship between personal exposure concentration and dermal emission flux, 12 volunteers, 7 men (age: 21 - 24 years) and 5 women (age: 21 - 23 years), were recruited. The PFS was put on the left forearm of participants. Simultaneously, a passive air sampler (Passive Gas Tube, Sibata, Japan) was applied on the shirt collar to measure the personal exposure concentration of toluene. All participants stayed at rest in the chemical laboratory for 8 h. Following the sampling instruction of the passive air sampler, sampling duration was set at 8 h. Collection amount of toluene (µg) by the passive air sampler was determined using GC-MS and converted to air concentration using a sampling rate of 10.8 µg ppm-1.h-1 and sampling duration of 8 h. The room temperature was 293 K, and relative humidity was around 50%.

This study was performed in accordance with the principles of the Declaration of Helsinki and was approved by the Institutional Review Board, Shonan Campus, Tokai University, Japan (no.: 16181). Written informed consent was obtained from all study participants.

The dose-dependent relationship between the concentration of inhaled toluene and that found in the blood is well documented in humans (13, 14). The major metabolic pathway of toluene in the blood is the formation of benzyl alcohol and further oxidation to benzaldehyde and benzoic acid. Thereafter, benzoic acid is conjugated with glycine to form hippuric acid, and most of the toluene absorbed are excreted in the urine in the form of hippuric acid (15). Exhalation is also known as another excretion route of toluene in the blood (16). As it is a volatile and hydrophilic compound, toluene in the blood moves directly to the lung and is excreted with exhaled air. Meanwhile, our findings suggest that dermal emission is also a possible route of excretion of toluene from the blood. Comparison of the emission flux of toluene emanating from healthy volunteers at rest with and without wearing the N95 mask during exposure in the chemical laboratory for 1 hour. Bars show standard deviation of dermal emission fluxes (sampling site: forearm, indoor toluene concentration: 1.5 mg.m-3, n = 9, one outlier was excluded, Wilcoxon signed-rank test: P = 0.005). Where C is the individual personal exposure concentration of toluene (mg.m-3) and Q is the daily inhalation rate (17.3 m3.d-1) for Japanese people (20). Carlsson (16) reported that approximately 55% of inspired air was absorbed in the body of men exposed to 300 mg m-3 for 2 h at rest; this value dropped to 50% during the next 2 h of exposure at rest. Lof et al. (21) reported a similar absorption percentage (approximately 50% absorbed) in groups of 10 men exposed to approximately 300 mg m-3 at rest for 4 h. Then, the coefficient of 0.5 was used in this estimation.

Figure 4 shows the comparison of inhalation rate and whole-body dermal emission rate of toluene for all volunteers (a) and selected non-smokers (b). The average whole-body dermal emission rate resulted in approximately 77% of the inhalation rate (D/U = 0.77) for all volunteers. According to previous studies, around 80% of the absorbed toluene is excreted in the urine (14) and between 7% and 14% is eliminated by exhalation (15). Considering these percentages, the 77% elimination via the skin surface is not in accordance with findings of those studies. Profiles of the participating volunteers revealed that four volunteers had a smoking habit. As cigarettes contain many VOCs, including toluene, cigarette smoking can be a source of dermal emission of toluene (3). Although smoking was prohibited during the experiment, the daily smoking habit probably increased the baseline toluene concentration in the blood and ultimately increased the dermal emission. After excluding the four smokers, the whole-body dermal emission reduced to 9.9% of the inhalation rate (D/U = 0.099). This emission would be in accordance with the previous studies, making the total excretion amount of the absorbed toluene roughly 80% in the urine, 7% - 14% in exhaled air, and 10% from the skin surface. However, there were some limitations in the estimation, especially due to uncertainty in the use of the respiration rate, skin surface area, and small number of participants.

Comparison between the estimated uptake and whole-body dermal emission rates of toluene in (A) all healthy volunteers and (B) non-smokers. Bars show standard deviation of rates.

The uptake of chemicals in environment occurs via three main routes, ingestion, inhalation, and dermal absorption, that lead to an internal concentration or body burden of the chemicals (23). Therefore, risk assessment of hazardous chemicals on human health is usually conducted based on the integrated uptake amount by the three routes. However, this study showed that toluene, whose uptake route is dominantly by inhalation, is released from the skin surface. This may also be the case when the dominant uptake route is by ingestion. The body internal concentration of the chemical is determined by the way of exposure, and physiological characteristics of individual. Therefore, the dermal emission of toluene may indicate the individual biological susceptibility to inhalation exposure to toluene.

Copyright © 2019, Journal of Skin and Stem Cell. This is an open-access article distributed under the terms of the Creative Commons Attribution-NonCommercial 4.0 International License (http://creativecommons.org/licenses/by-nc/4.0/) which permits copy and redistribute the material just in noncommercial usages, provided the original work is properly cited.
download pdf 212.27 KB Get Permission (article level) Import into EndNote Import into BibTex
Number of Comments: 0