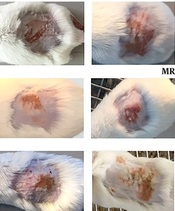 The bark oil of Dipterocarpus alatus Roxb. ex G. Don (resin tree) has been used for the treatment of ulcerated wounds in Ayurvedic medicine. However, information is still scarce about D. alatus extract and its constituents.

Staphylococcus aureus is a Gram-positive pathogen of the skin, soft tissues, and septic infections (1). The first-line drugs for S. aureus treatment are β-lactam antibiotics, such as penicillin and cloxacillin, but the incidence of β-lactam-resistant S. aureus strains (methicillin-resistant S. aureus, MRSA) is increasing (2). Hence, new effective antibacterial agents against MRSA are required.

Traditionally, the oleo-resin of Dipterocarpus alatus Roxb. ex G. Don was used for illumination and waterproofing baskets and boats (3). Dipterocarpus alatus bark oil has been applied in Ayurvedic medicine for external wound healing (4). Most of the bioactive chemical constituents isolated from genus Dipterocarpus are from the bark, which is an important source of resins such as oleoresin, dammars, and camphor. The main chemical constituents are sesquiterpenes, triterpenes, and coumarin derivatives (5). A previous study showed that the oleo-resin of D. alatus was an effective treatment for skin ulcers (6). Moreover, crude extracts from several parts of D. alatus have been reported to have free radical scavenging and anti-cancer activities (7). Besides, an ethanolic leaf extract of D. alatus was shown to inhibit monoamine oxidase and reduce the symptoms of depression in unpredictable chronic mild stress in mice (8). To date, there is no information about the antimicrobial effects of D. alatus extracts.

We aimed to investigate the antibacterial and wound healing effects of D. alatus crude extracts in an MRSA-induced superficial skin infection mouse model.

Dipterocarpus alatus crude extracts were prepared from different parts, namely bark, leaves, twig, and wood. Dipterocarpol and α,β-gurjunene were isolated from the oleo-resin extract as described elsewhere (6). Briefly, bark, leaves, twig, and wood were macerated with methanol. After evaporation to eliminate methanol, the crude extracts were obtained in the yields of 4.24, 11.80, 6.07, and 6.01%, respectively. Oleo-resin was heated at 40 - 60°C to give clear oil for use in this study. Oleo-resin (25.04 g) was isolated using the open column chromatographic technique to achieve the two known compounds, dipterocarpol (1.01 g) and α,β-gurjunene (4.76 g).

The minimum inhibitory concentration (MIC) was evaluated by the broth dilution method in MHB as described elsewhere (9). An inoculum of MSSA or MRSA (2 × 106 CFU/mL) was mixed with D. alatus extracts, α,β-gurjunene, dipterocarpol, oxacillin, erythromycin, and tetracycline, and incubated at 37°C for 24 hours. The growth of bacteria was determined at 625 nm by a spectrophotometer. The MIC value was identified from the well in which MSSA or MRSA growth was inhibited.

For minimum bactericidal concentration (MBC), all wells with no visible growth were cultured on MHA plates by simple streaking and the plates were incubated at 37°C for 18 - 24 hours. The MBC was determined from the lowest concentration of the test compound without colonies (9).

Seven-week-old male ICR mice (30 - 35 g) were bred and provided by the National Laboratory Animal Center, Mahidol University, Thailand. All mice were housed in the Northeast Laboratory Animal Center, Khon Kaen University, Thailand. Animal-related protocols were adopted from the Animal Ethics Committee for Use and Care of Khon Kaen University (approval no. ACUC-KKU-38/2559) in agreement with the Guide for the Care and Use of Laboratory Animals prepared by the National Research Council of Thailand. After transportation, mice were acclimated for a week before being randomly divided into eight groups (n = 10 per group). The mice were anesthetized by intraperitoneal injection of pentobarbital sodium 50 µg/kg and the back hair was shaved. An adhesive plaster was quickly applied to and immediately removed from a 2 × 2 cm2 dorsal area for 15 - 20 times until the skin became swollen and ruddy without bleeding. The transepidermal water loss (TEWL) value was measured by DermaLab® Combo (Hadsund, Denmark) and standardized at the level of 70 - 75 g/m2h to normalize the skin damage of all mice. After that, a 10 µL-MRSA inoculum (1 × 108 CFU/mL) was applied to wounds (9). A 100-µL aliquot of each sample, i.e., 10% ethanol in propylene glycol (vehicle), 20 mg/mL of D. alatus twig/oleoresin/wood extract, 4 mg/mL of α,β-gurjunene, 1.1 mg/mL of dipterocarpol, or 160 µg/mL of tetracycline, was applied to the wound area daily for nine consecutive days. The non-infected control group and non-treated control group (MRSA-infected group without treatment) were treated with a vehicle. The TEWL was determined on days 1, 2, 5, and 7. Swabs from infected-wounds were cultured on 6 μg/mL oxacillin-contained MSA plates on days 2, 4, 6, and 8. The number of MRSA colonies was recorded after incubation for 18 - 24 hours (10). Wounds were photographed on days 1, 3, 5, 7, and 9.

3.5. Skin Staining by Hematoxylin and Eosin

Mice from each treatment group were sacrificed on days 1, 4, and 8. The skin from the dorsal area was collected and washed in iced isotonic phosphate-buffered saline for 30 minutes before soaking in a 10% formalin solution at 4°C for 24 hours. The skin sample was gradually dehydrated in ethanol (50 to 100% v/v) at room temperature, embedded in warm paraffin (60°C), and frozen at -20°C. The paraffin-embedded skin was cut into 5 μm sections and fixed on a glass slide before staining with hematoxylin and eosin (H&E) solution following the instructions of the supplier (10).

The TEWL values and the number of MRSA colonies are presented as mean ± SD. Statistical significance was analyzed by one-way ANOVA followed by Tukey’s test using SPSS V. 22.0 program. A P value of < 0.05 was considered significant.

4.1. Effects of Dipterocarpus alatus Extracts on MSSA and MRSA In Vitro

Table 1 shows the MIC and MBC of D. alatus extracts, α,β-gurjunene, and dipterocarpol, compared to three antibiotics, oxacillin, erythromycin, and tetracycline. Tetracycline showed the most anti-MSSA and MRSA activity, while erythromycin and oxacillin did not inhibit MRSA growth. Almost all D. alatus extracts showed less antibacterial activity than tetracycline, with MICs and MBCs of 500 µg/mL or higher. The D. alatus twig extract had the lowest MIC and MBC against MRSA at 250 and 500 µg/mL, respectively. Moreover, α,β-gurjunene showed lower MIC and MBC (250 µg/mL) against MRSA than dipterocarpol. Thus, twig and wood extracts, α,β-gurjunene, and tetracycline (a positive control) were selected for in vivo experiments in the mouse superficial wound model. In addition, we studied the oleo-resin extract, which has been claimed to heal ulcerated wounds in Ayurvedic medicine (4), and its principal component dipterocarpol (6).

The daily examination revealed that the wounds of non-infected control mice completely healed nine days after tape stripping (Figure 1) while MRSA-infected non-treated mice were found to be ulcerated until the ninth day and remained infected according to the MRSA colony counts (Table 2). The D. alatus twig extract and dipterocarpol were effective in wound healing at a rate comparable to control mice. The oleo-resin extract demonstrated some wound healing effects though it was inferior to the twig extract and dipterocarpol. The wounds of the groups treated with wood extract, α,β-gurjunene, and tetracycline remained scabby on the ninth day. The TEWL indicated the permeability of the skin layer by measuring the rate of water loss. The TEWL value was the highest after the epidermal barrier removal by tape stripping. In the non-infected control group, TEWL recovered to pre-wound levels within seven days (Figure 2). The D. alatus twig extract and dipterocarpol treatments gradually decreased the TEWL to the same level as the non-infected control group, which was significantly lower than the MRSA-non-treated group. The improvement in wound appearance and a decrease in TEWL indicated that the D. alatus twig extract and dipterocarpol possessed wound healing properties. Mouse superficial wound appearance. Mouse superficial wounds were established by repeated tape stripping to remove the epidermis. Wounds were infected with 1 × 106 MRSA and treated daily with 10% ethanol in propylene glycol (non-treated control), 20 mg/mL Dipterocarpus alatus twig/oleo-resin/wood extract in 10% ethanol in propylene glycol, 4 mg/mL α,β-gurjunene, 1.1 mg/mL dipterocarpol, or 160 µg/mL tetracycline for nine days along with a non-infected control group (eight groups, 9 - 10 mice in each group). The wounds of all mice were photographed on days 1, 3, 5, 7, and 9.

Transepidermal water loss (TEWL) of mouse superficial wounds. Mouse superficial wounds were established by repeated tape stripping to remove the epidermis. Wounds were infected with 1 × 106 MRSA and treated daily with 10% ethanol in propylene glycol (non-treated control), 20 mg/mL Dipterocarpus alatus twig/oleo-resin/wood extract in 10% ethanol in propylene glycol, 4 mg/mL α,β-gurjunene, 1.1 mg/mL dipterocarpol, or 160 µg/mL tetracycline for nine days along with a non-infected control group (eight groups, 9 - 10 mice in each group). The TEWL from the superficial wounds was measured on days 1, 2, 5, and 7 and presented as mean ± SD. #P < 0.05 vs. MRSA-non-treatment on the same day by one-way ANOVA followed by Tukey’s post hoc test.

4.4. Effects of Dipterocarpus alatus Extracts and Dipterocarpol on Wound Histology Histology of wounds with H&E staining. Mice were sacrificed on days 1, 4, and 8 and tissues were cut into 5-μm sections, stained with H&E, and mounted. E indicates epidermis, black arrows indicate fibrin accumulation, and squares indicate areas with neutrophil infiltration. The tissues were photographed at 400x magnification.

The number of skin and soft tissue infections commonly caused by S. aureus and community-acquired MRSA increased between 1998 to 2004 in North America (11). The frequency of S. aureus-induced skin infection was 44.6% and the rate of MRSA among isolates was 35.9% (12). Hence, there is a need for an effective compound for the treatment of MRSA infection. To date, there are limited reports on the antibacterial effects of Dipterocarpus species and dipterocarpol. Dipterocarpus verrucosus has been reported to have in vitro antibacterial effects (5). The oleo-resin of Shorea robusta Gaertn (containing dipterocarpol) is an antibacterial, astringent, analgesic, and wound healing agent (13). Here, we described the first experiments demonstrating the activity of D. alatus extracts and dipterocarpol against S. aureus both in in vitro and in vivo.

The MRSA colony counting from mouse wounds indicated that the number of MRSA colonies gradually reduced without treatment (Table 2); however, all D. alatus extracts accelerated the decrease in the colony number from the first day of treatment. The comparatively reduced antibacterial properties of D. alatus extracts and dipterocarpol in vitro may be due to their low water solubility (9). One study reported that the rate of antibacterial susceptibility to tetracycline in MRSA isolates was about 82% (11), which corresponded to our in vitro results. Hence, tetracycline was applied as a positive control in the mouse model. However, tetracycline showed low antibacterial activity against MRSA in this model, presumably due to its low permeability and inability to cross the skin membrane layer.

The tape stripping technique in combination with MRSA infection is a well-known mouse model for studying antibacterial and wound healing effects, representing an abrasive wound in S. aureus skin-infected patients (10, 14). The TEWL indicates skin barrier damage (10) and it was used to normalize the same level of skin barrier damage in all mice on the first day of study. After the tape stripping, the application of MRSA inoculum to an abrasive wound allowed MRSA to grow, permeate the wound, and stimulate the systematic inflammatory response. Fibrin deposition in the skin is an eminent and compatible marker for type IV hypersensitivity skin reactions, contact dermatitis, and MRSA-infected skin (10, 15). Neutrophil infiltration is a process required for an effective immune response against S. aureus (16). Our observations showed both fibrin deposition and neutrophil infiltration after tape stripping and MRSA infection. Treatment with D. alatus twig extract and dipterocarpol completely reversed these conditions, comparable to the non-infection control group. The MRSA colony counting, TEWL, wound appearance, and H&E staining clearly indicated that the D. alatus twig extract and dipterocarpol had anti-MRSA activity and wound healing properties that would be suitable for further development as a topical formulation for superficial skin infection.

Copyright © 2019, Journal of Skin and Stem Cell. This is an open-access article distributed under the terms of the Creative Commons Attribution-NonCommercial 4.0 International License (http://creativecommons.org/licenses/by-nc/4.0/) which permits copy and redistribute the material just in noncommercial usages, provided the original work is properly cited.
download pdf 5.24 MB Get Permission (article level) Import into EndNote Import into BibTex
Number of Comments: 0